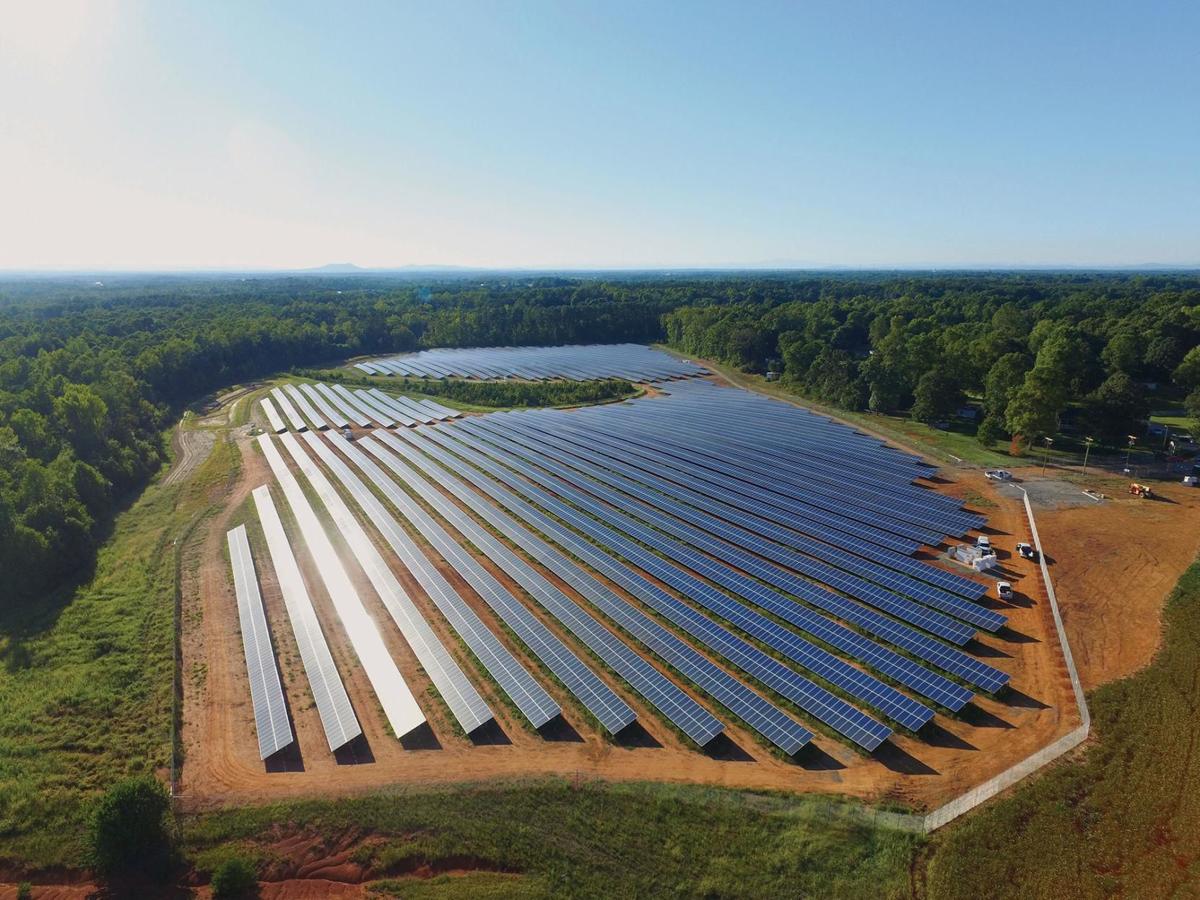 California-based Cypress Creek Renewables, which operates solar projects such as this one, is now developing a 400-acre, 60-megawatt solar farm in Orange County. 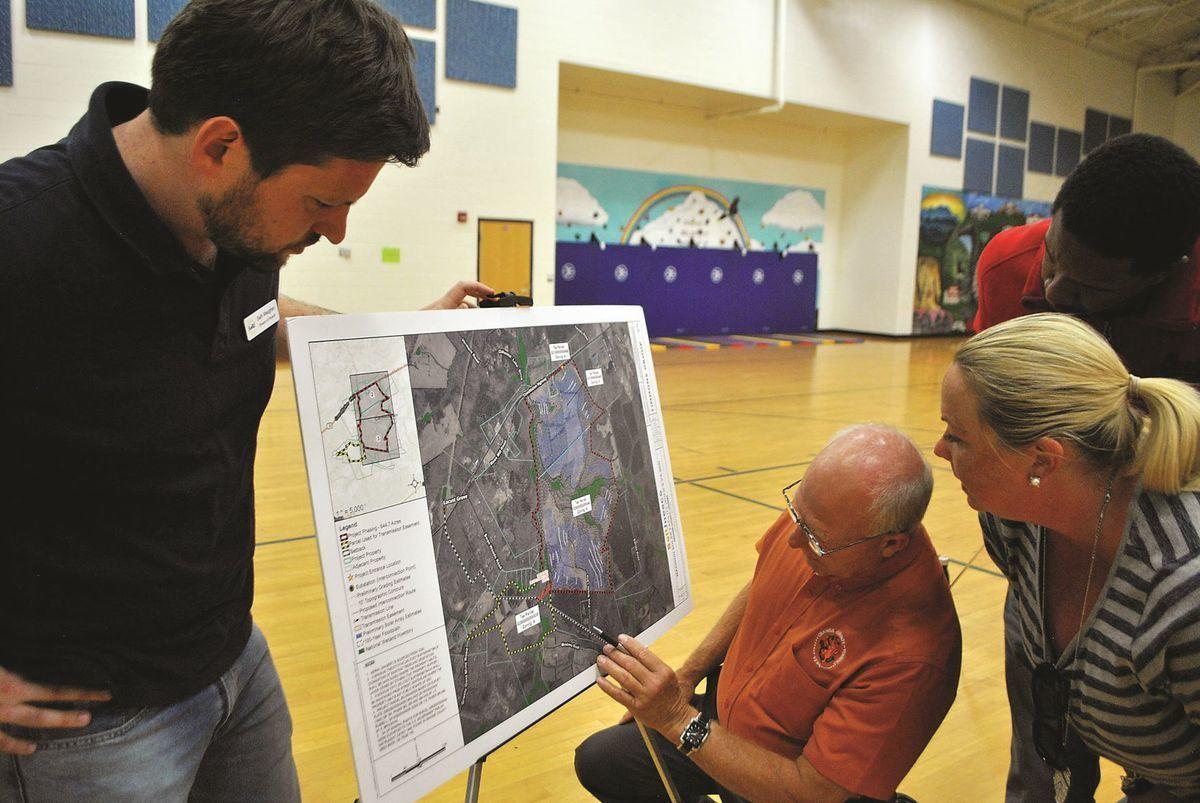 Staff members with solar developer SolUnesco discuss the proposed 400-acre, 60-megawatt solar farm along Route 20 in Orange County during an open house in 2017. The project is now under the direction of a new developer, Cypress Creek Renewables.

California-based Cypress Creek Renewables, which operates solar projects such as this one, is now developing a 400-acre, 60-megawatt solar farm in Orange County.

Staff members with solar developer SolUnesco discuss the proposed 400-acre, 60-megawatt solar farm along Route 20 in Orange County during an open house in 2017. The project is now under the direction of a new developer, Cypress Creek Renewables.

ORANGE — A year after Orange County officials approved the county’s first large-scale solar farm, a new developer is seeking public input on the project on Route 20 about a mile from Locust Grove Primary School.

Construction on the 400-acre, 60-megawatt solar farm is expected to begin in 2019, with the project expected to reach commercial operation by 2020.

In summer 2017, Reston-based solar developer SolUnesco submitted a special-use permit application with the county. SolUnesco conducted a community input session and saw the project through the county’s public hearing processes before ultimately getting the supervisors’ approval.

Earlier this year, the county was notified that the project was now under the direction of a new developer, Cypress Creek Renewables.

Based in Santa Monica, California, Cypress Creek in 2018 also became the new owner of a solar farm proposed between Brandy Station and Stevensburg in Culpeper. The Culpeper County Board of Supervisors, however, ultimately denied the application for that project, saying it was the wrong location.

Cypress Creek Renewables, for its new Locust Grove project, is conducting a required 30-day public comment period the company says is geared is toward hearing citizens’ concerns, as well as enabling communication between the owners and operators of the project with those who may be affected by the construction of the proposed solar farm. The comment period is open through Jan. 27.

Meanwhile, the developer also will have a public input session for citizens to ask any questions they may have regarding the project. According to a notice put out by Cypress Creek Renewables, the session will be conducted at the Wilderness Branch Library at 1 p.m. Jan. 15. While the input session is scheduled for 30 minutes, the notice states the event will continue “until all questions have been answered.”

The proposed facility, known as the Sol Madison Solar project, received overwhelmingly positive support during the county’s SUP process. Both the Planning Commission and the Board of Supervisors voted unanimously in favor of the project. The operation of solar farms — as a public utility facility — is permissible as a special use in all county zoning districts.

According to the developer, the proposed operation will produce enough clean and renewable energy to power the equivalent of more than 10,000 single-family homes from solar panels covering approximately 400 acres in eastern Orange County. The project would interconnect to a 115-kilovolt line one-tenth of a mile from the property. The electricity generated at the facility would be collected at a proposed onsite substation.

“Once complete, this project will provide power to the wholesale electricity grid and either sell directly to a large customer, the utility or the utility may purchase the project, adding this competitive, fixed price power to their portfolio of power generation,” Sol Madison Solar’s website states.

The developer owns more than 640 acres (on four parcels) of agriculturally zoned land where it plans to construct a solar facility composed of polycrystalline photovoltaic collectors and associated equipment. Solar panels will be on a racking system less than 12 feet tall, and “would offset an estimated 100,450 tons of carbon dioxide annually,” its website states, “the equivalent of removing 9,750 cars from the road each year.”

The project is expected to generate $60 million in local spending during construction. During the SUP process, SolUnesco estimated the project would bring in $2.2 million to the county in machinery and tools tax revenue over the course of its life (assuming a 30-year lifespan). Furthermore, the project would remove two parcels out of the county’s land use taxation program, bringing in an estimated $10,000 per year in property tax revenue, SolUnesco representatives said.

However, county officials did have reservations about the project. There were 20 conditions added to the SUP prior to its approval, addressing issues ranging from adequate buffering to performance bonds.

Orange County Administrator Bryan David said that because a project of this size would greatly impact county planning staff and resources, the county will contract with an engineering firm to oversee the project’s compliance with all permitting and site plan review standards. While the county will be billed for the engineers’ work, those costs would be supplemented by Cypress Creek Renewables.

“We feel pretty good with our security in this position and we feel really good with us not having to hire more staff, which would really be of a more temporary nature than anything else,” David said, noting that this approach holds county taxpayers harmless. “In fact, I’ve gotten some inquiries from other localities on the model we’re using for our staff work. It seems like it has gotten some interest from others who want to copy what we’re doing.”

Once the developer received the county’s approval, it had to submit an application at the state level.

In 2009, the Virginia General Assembly required the Virginia Department of Environmental Quality to develop regulations for the construction and operation of renewable projects of fewer than 150 megawatts (small renewable [solar] energy projects).

The public comment period is one of 15 requirements set forth by the DEQ’s permit by rule regulation process. However, when the notice of the public participation period ran in a Charlottesville newspaper rather than in Orange, supervisors questioned the developer’s intentions.

Supervisor Jim Crozier, whose district includes the proposed site of the project, brought up the issue during the supervisors’ Dec. 18 meeting.

“It was obviously done to avoid anybody knowing,” Supervisor Mark Johnson said.

“That’s part of my concern here,” Crozier said. “I don’t think that anyone in [the Charlottesville area] really cares.”

He also said he thinks community members should be granted more than 30 minutes on a weekday mid-afternoon to get their questions answered.

“The way this [notice] seems to be put out is that people will have a 30-minute time period if they don’t feel like writing to the company,” Crozier said. “I think it deserves a little bit more than that, and I will be submitting something to them to that regard. But with the scope of this project and the impact that it can ultimately have on the county, I felt like it was important to get out there.”

The county has posted information about the public input session and comment period on its website, orangecountyva.gov.

“I would think that they would at least have the courtesy of letting us know what’s going on,” said David.

Other PBR requirements include: a notice of intent, compliance with local land use ordinances, interconnection studies and agreements, a mitigation plan, an analysis of potential air quality impacts and an analysis of potential natural resources impacts. As part of the application, the developer also had to pay $12,000 for a permit application fee.

On Dec. 13, Cypress Creek submitted a 400-plus-page document that includes its application for PBR approval.

Within the application is a preliminary analysis of environmental and historical resources impacts, to include studies on endangered species, wetlands, floodplains and historic and cultural resources.

According to the application, there are no endangered or threatened species of concern within the proposed project area, nor are there negative effects on the air quality. Any disturbance to wetlands and bodies of water would be consistent with federal, state and local permitting requirements to minimize impacts, the application states.

A cultural resources survey “identified 16 archaeological sites and 13 isolated finds,” including a headstone. The project area is within the Mine Run Battlefield, which is potentially eligible for the National Register of Historic Places, the application noted.