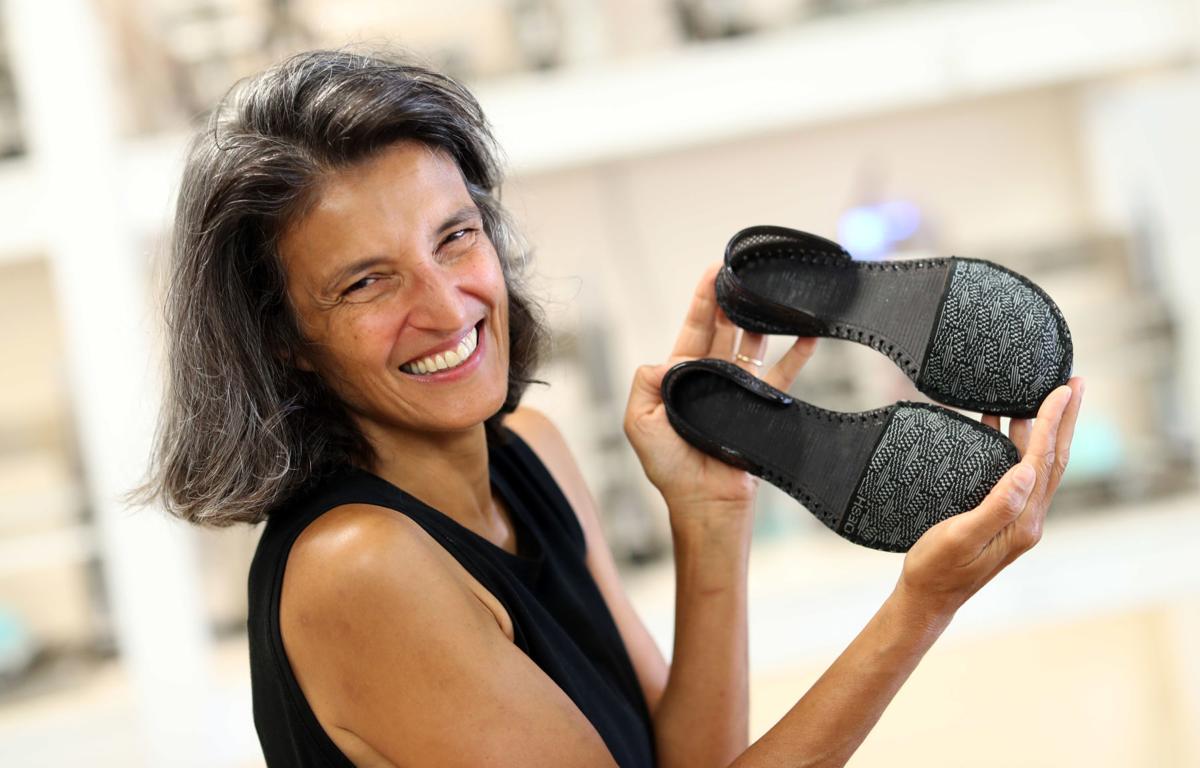 Dr. Casey Kerrigan, owner of OESH, displays an example from the company’s new line of women’s footwear. The shoes are both 3-D-printed and hand-crocheted locally. 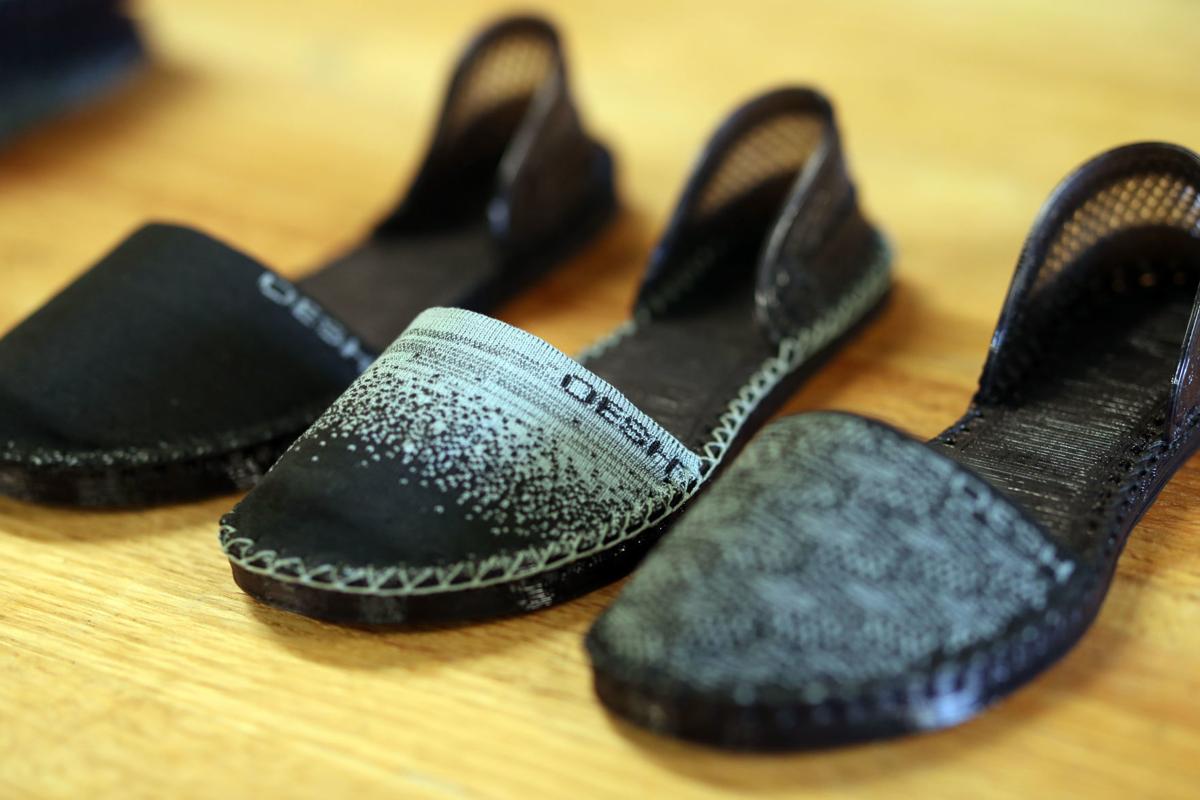 The Townie, a d’Orsay-style dress flat, features a computer-knitted mid-rise vamp over a wider toe box hand-crocheted to a 3-D-printed sole composed of more than 2,000 stacked honeycomb springs in the mid-sole.

Dr. Casey Kerrigan, owner of OESH, displays an example from the company’s new line of women’s footwear. The shoes are both 3-D-printed and hand-crocheted locally.

The Townie, a d’Orsay-style dress flat, features a computer-knitted mid-rise vamp over a wider toe box hand-crocheted to a 3-D-printed sole composed of more than 2,000 stacked honeycomb springs in the mid-sole.

In business, the biggest ideas often come from the smallest of companies.

For tiny Charlottesville shoe company OESH, big ideas are its business model. It designs shoes based on medical school studies of human muscular skeletal structure conducted by its founder.

It builds its own manufacturing machinery based on designs created by the same founder.

Now the company is putting machine and knowledge to work to create what company leaders say is the perfect women’s dress shoe that is designed, built and assembled entirely in Charlottesville.

The company has officially released the Townie, a d’Orsay-style dress flat with a computer-knitted mid-rise vamp over a wider toe box hand-crocheted to a 3-D-printed sole featuring more than 2,000 stacked honeycomb springs in the mid-sole.

A 3-D-printed heel quarter designed to keep the shoe secure to the foot also is crocheted to the shoe.

The shoes are printed and knitted in the company’s Rose Hill neighborhood headquarters and crocheted by residents settled locally through the International Rescue Committee.

To help fund the shoe, expand production and get the word out, the company is running a crowdfunding campaign on indiegogo.com.

The patent-pending 3-D printers, and the shoe itself, were designed by OESH owner Dr. Casey Kerrigan, a Harvard-trained medical doctor who led the University of Virginia’s Department of Physical Medicine and Rehabilitation before going into the world of women’s shoes.

“I wanted to build a perfect shoe, especially for women because women tend to have more joint issues at the knee and hip. It took a long time and I basically had to recreate how to make it,” she said. “My original research was on dress shoes because they’re the shoes we’re in all day long and I was seeing women wearing crappy dress shoes.”

Kerrigan’s research and medical training puts OESH a step above bigger, better-funded shoe companies. An expert in human gait and mobility, her research while a member of the Department of Physical Medicine and Rehabilitation at Harvard Medical School indicated that the wearing of high-heeled shoes increases force on joints and can lead to knee injuries and arthritis.

Those results have been duplicated by other university studies, according to the National Institutes of Health.

Her 2009 study of running shoes’ impact on gait and joints, conducted when she served as a professor of physical medicine and rehabilitation and director of the Gait and Motion Laboratory at UVa, showed athletic shoes made of traditional materials provided initial impact softening but put additional stress on knees, even compared with running barefoot.

That created a tempest in the training shoe teapot and helped to fuel a barefoot running craze that Kerrigan disavowed. It also was a motivator for Kerrigan to start designing her own shoes and securing the means to manufacture them.

“When you walk or run, you land on the outside part of your foot and roll in. As you do that, the force moves along the outside part of your foot to the inside and then back out again,” she said. “A shoe should be flat in all planes because any contour increases impact on joints. It should be springy, not just soft like the traditional comfort shoe, because you have to energy return into the structure of the foot to reduce impacts farther up the leg. And that springiness needs to last the life of the shoe.”

Kerrigan, with husband Bob Kusyk, whose strengths lie in economics, created OESH to do just that.

“People ask me about the insanity of leaving a great job like UVa and building a factory,” Kusyk said. “It’s one thing to discuss research but who’s going to put their money where their mouth is?”

That, he said, would be Kerrigan.

“I couldn’t address the issue through the shoe industry. They’d like me just go into a closet,” Kerrigan laughed. “My goal was to eventually address the shoes women wear all day, and that’s the dress shoe.”

After leaving UVa to focus on OESH, the first thing Kerrigan designed was an athletic shoe with a carbon fiber cantilever that flexed and released like a diving board. It was followed by casual/athletic shoes and clog-style dress shoes designed in Charlottesville but made in a contracted factory in China.

The printer parts are cut by a programmable water-jet saw, which gives OESH the ability to repair, replace or increase the number of printers making the shoes as demand dictates.

“I knew that what needed to be made was a sole with thousands of spring-like mechanisms but there was no way to build it other than through 3-D printing and there were no printers out there that could do that,” Kerrigan said. “I had it in my head what needed to be done, but to make it happen, I had to develop the technology that could do it.”

Then came the dress shoe. The shoes tend to have narrow toe boxes that squeeze the foot and narrow toe spacing. That foot scrunching actually helps to keep the shoe on the foot during walking, but increases stress on joints and muscles throughout the leg.

Using an industry knitting machine, the vamp that runs over the front of the foot to keep the toe in the shoe could be made extra firm and stretchy to help retain the shoe even as the toe box was widened to reflect the anatomy of women’s feet.

The 3-D printing provides holes along the sole so that pieces may be crocheted to the sole rather than using toxic glues, and the company works with the IRC to help refugees earn income from home.

Where can I buy them?