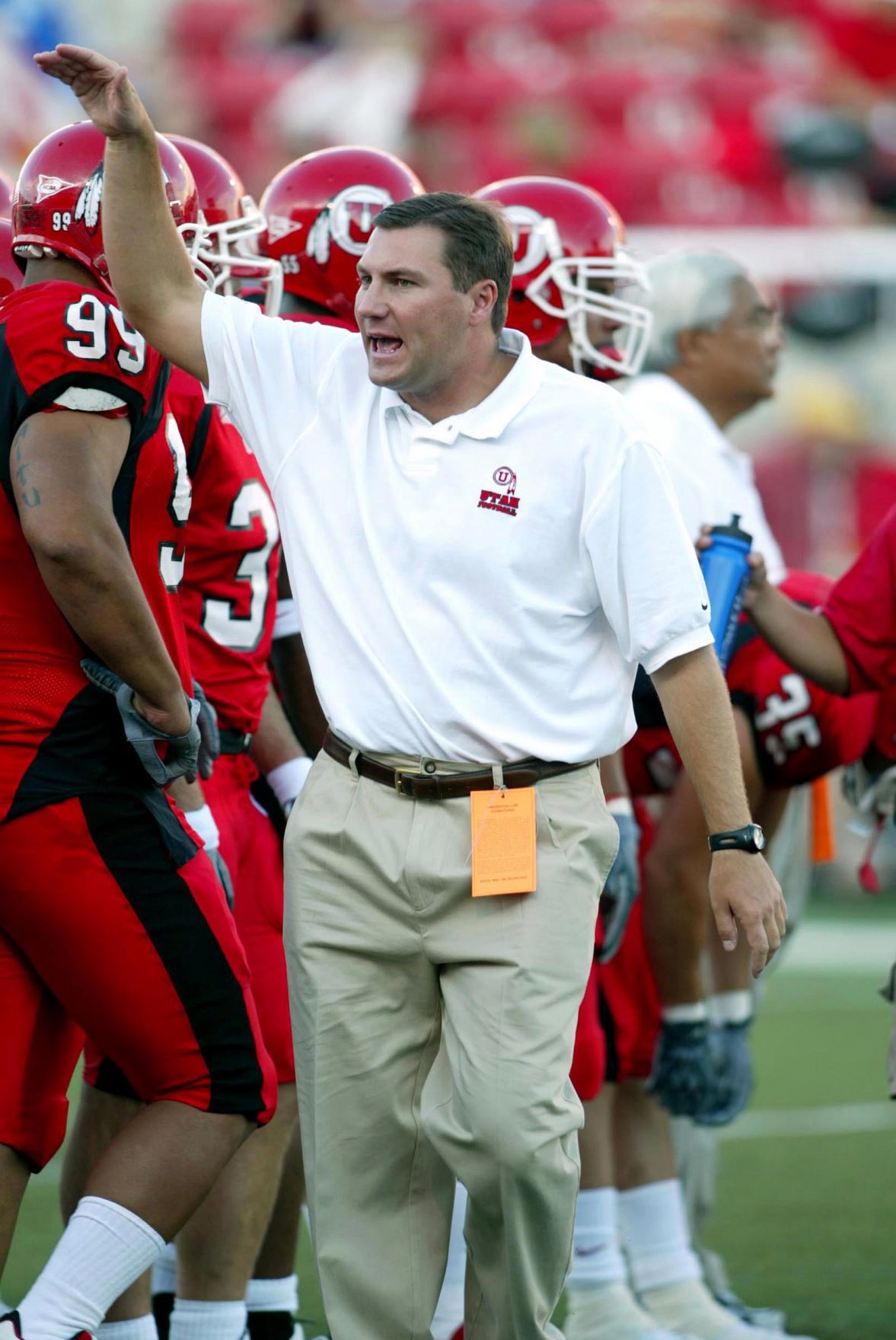 Current Florida coach Dan Mullen was the quarterbacks coach at Utah in 2003 and 2004 and coached Alex Smith, who was the No. 1 overall pick in the 2005 NFL Draft. 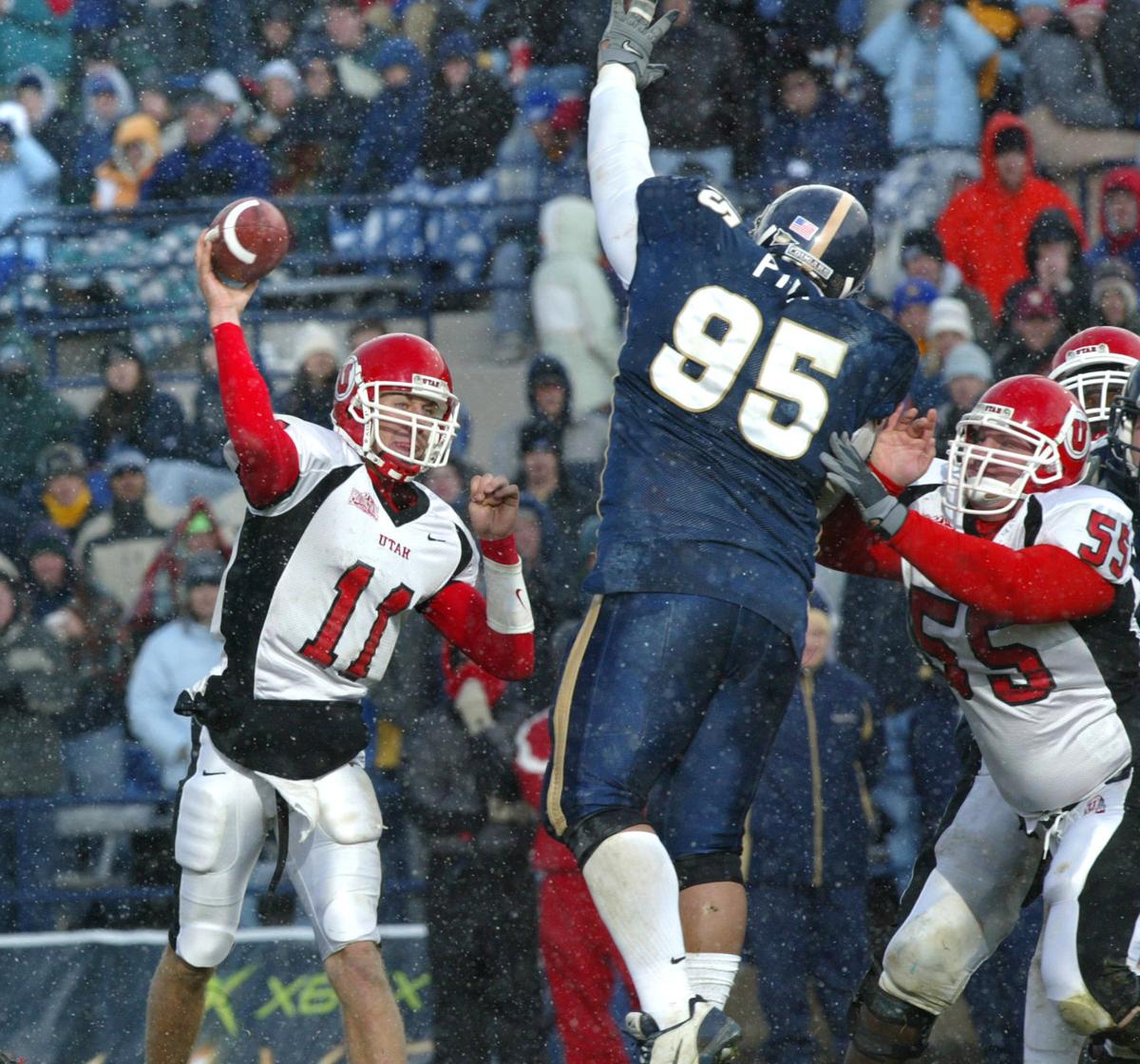 Current Florida coach Dan Mullen was the quarterbacks coach at Utah in 2003 and 2004 and coached Alex Smith, who was the No. 1 overall pick in the 2005 NFL Draft.

Bronco Mendenhall and Dan Mullen will lead Power 5 football programs into this year’s Orange Bowl, but before their rise of the coaching ranks, the two served as assistant coaches for a pair of rival programs.

“He and I, man, we go back to almost five lifetimes ago to the BYU-Utah rivalry at the beginning stages of our career,” Mendenhall said of Mullen at a joint Orange Bowl press conference. “To see what he’s done since that, you could see all the signs written, even back then.”

With the two teams working for bitter rivals, the teams naturally met annually. They squared off in both 2003 and 2004. Utah and Mullen won both meetings, but Mendenhall’s unit bested Mullen’s group in the 2003 contest.

Utah won by a final score of 3-0, but Mendenhall’s defense held Alex Smith and the Utes to just 220 yards of offense. After the game, which was played on a cold, snowy day, Mendenhall told the Salt Lake Tribune his defense hadn’t done enough.

“My job as the coordinator is to have the opponent score less points than we do,” Mendenhall said after the game.

Mullen remembers the game well, and the sub-par weather stood out most to him. There was wind and snow throughout the game, which certainly played a role in BYU breaking its NCAA-record streak of 361 games without being shut out.

“That was as cold as it gets,” Mullen said. “My big memory from that game is some of the coaches are in the box calling down, I mean, the snow was coming sideways, and at one point it stopped snowing and the guys in the box are like, ‘Oh, it looks like it’s cleared up down there,’ and I’m like ‘Why don’t you come down out of the box down here on the field and see what it feels like.’ That was fun.”

Even with Smith, the eventual No. 1 pick in the 2005 NFL Draft, the Utes relied heavily on their rushing attack.

“The game in the snow, the quarterback was Alex Smith, he must’ve run the ball, it felt like about 80 times because it was too risky to throw it or do anything else,” Mendenhall said.

Kurt Kragthorpe covered the game for The Salt Lake Tribune, and he was surprised Urban Meyer’s squad failed to score a touchdown. The thought of an Urban Meyer-led team scoring just three points with a No. 1 pick at quarterback seems preposterous today.

“It’s kind of crazy that Utah could win a game by only scoring three points with Alex Smith as their quarterback,” Kragthorpe said.

Following the conclusion of the 2003 game, Kragthorpe decided he’d head from Provo back to Salt Lake City to write his game column instead of doing it in the press box. The decision turned out to be a mistake as the weather made the drive quite a challenge.

“It literally took three hours to drive 40 miles back to Salt Lake,” Kragthorpe said. “That’s how bad it was.”

Mother Nature cooperated in 2004, which allowed Smith and the Utes to move the ball with ease against Mendenhall’s defense. Utah, which made a BCS Bowl in 2004, finished off an undefeated regular season with a 52-21 victory.

After barely surpassing 200 yards the year prior, the Utes racked up 538 yards, including 354 on the ground. The game finished a regular season defined by the rise of Smith, who spent time learning from Mullen.

“They weren’t sure he would be an NFL player to begin with,” Kragthorpe said. “They certainly weren’t sure that he would leave as a junior and there was absolutely no way in the world he could ever become the No. 1 pick … No question about it Mullen and in particular Meyer overall deserve credit for Alex’s development because no one could have seen that coming until it happened.”

Kragthrope said the rivalry accelerated with Meyer in town, and the rivalry has continued to blossom into one of the most heated in college football.

While BYU-Utah games don’t earn the same level of coverage as games like the Ohio State-Michigan game, there’s no love lost in the “Holy War” rivalry.

“That is one of the special rivalry games in college football between Utah and BYU,” Mullen said. “That was a lot of fun to be a part of. Those were great years, and when you play in those type of rivalry games, it makes it so much fun.”

“More fun for Dan because I think they won both those games,” Mendenhall quipped back.

Mendenhall became the head coach at BYU and ended his tenure in Provo as the second-winningest coach in program history. He then moved to UVa and has turned the Cavaliers into ACC Coastal Division champions.

Mullen followed Meyer to Florida and won national championships in 2006 and 2008 as the team’s offensive coordinator. He became a head coach in 2009 when he took over the Mississippi State job. He won SEC Coach of the Year in 2014, and helped the Bulldogs find tremendous success with Dak Prescott at quarterback. He returned to Florida, this time as the head coach, in 2018.

The two coaches weren’t the focal points in 2003 or 2004, but they’ll lead nationally ranked teams onto the field on Dec. 30 in their first matchup in 15 years with all eyes on them.

There’s no knowing the outcome of this matchup between the two coaches, but one thing is for sure, at least the weather in Miami should be better than what the two coaches saw in 2003.