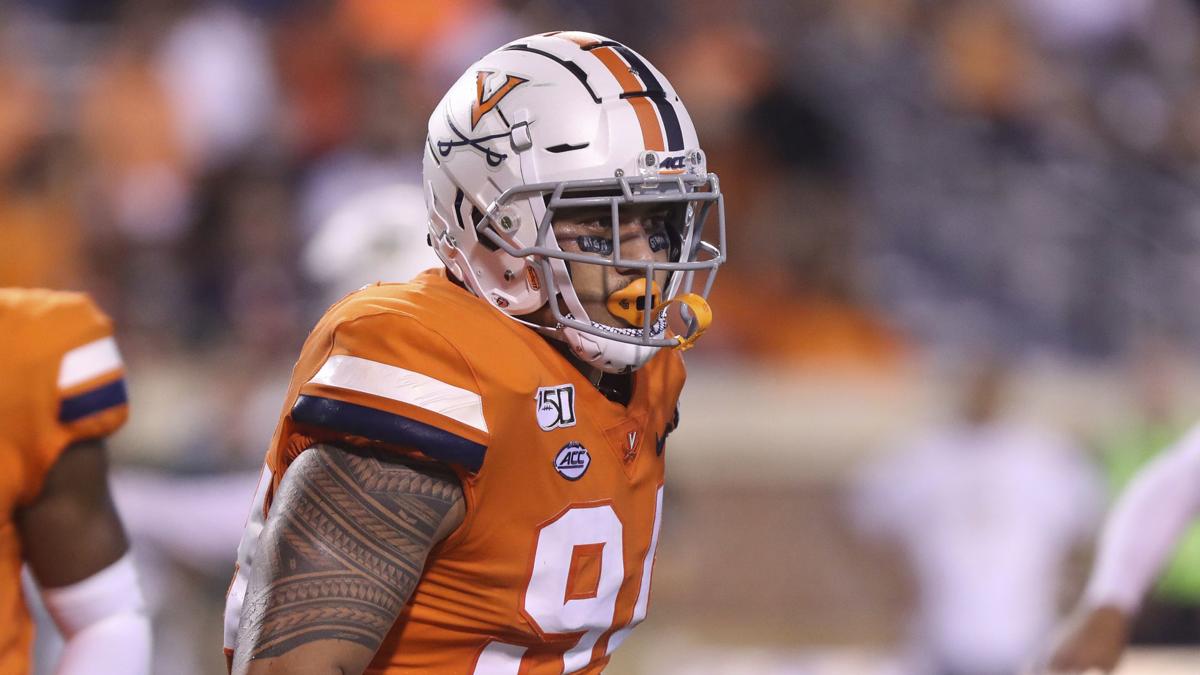 Virginia defensive lineman Aaron Faumui is from Hawaii. He was originally committed to Hawaii but decided to come to Virginia after being heavily recruited by Cavaliers assistant coach Mark Atuaia. 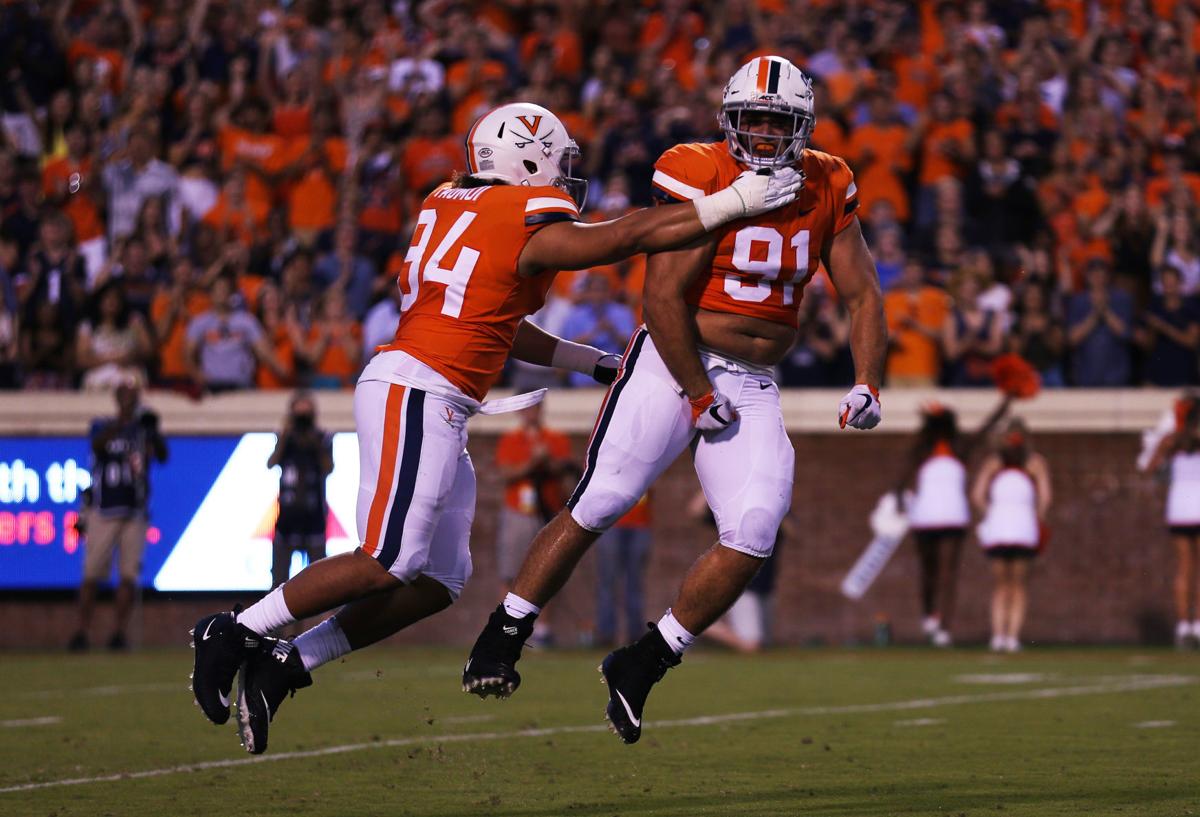 Virginia defensive lineman Aaron Faumui is from Hawaii. He was originally committed to Hawaii but decided to come to Virginia after being heavily recruited by Cavaliers assistant coach Mark Atuaia.

Atuaia — himself a native Hawaiian — knew that meant if he had any hope of attracting Faumui to the East Coast he had to win over his parents first before he even thought about approaching their son.

“He wanted to leave the island to better himself, and the family was looking for somebody they could trust,” Atuaia said.

It helped that Atuaia is something of a local legend among Hawaiian high school football players. His 4,156 career rushing yards rank No. 5 in the state, and his 2,377 yards in 1990 are still the most in a single season.

Having played against a couple of Faumui’s uncles was an even bigger feather in his cap, but on-field accolades weren’t enough. Atuaia had to impress upon Faumui’s parents that he would care for their son as if he were his own.

“Once the family got to know me, they knew I would take care of him,” Atuaia said.

“It was really hard because my mom wanted me closer,” Faumui said. “I just told her I have to grow up and mature, and the only way is to move away from home.”

Faumui was verbally committed to the University of Hawaii when Virginia made a late push. Faumui first heard Atuaia’s pitch over lunch, but he was still leaning toward the Rainbow Warriors. After all, he attended Hawaii games most of his life and had an uncle, Ta’ase Faumui, who was a star there before he went on to play for the Pittsburgh Steelers.

About a week before Faumui was scheduled to sign his national letter of intent, Atuaia threw all his chips on the table during an in-home visit, and he brought defensive line coach Vic So’oto and offensive coordinator Robert Anae with him.

That’s when the tide started to turn in the Cavaliers’ favor.

“He talked about how much of a family everybody on the team is, and how much the coaches care about the players,” Faumui said. “What really caught my attention was the education I could get here.”

On signing day, nobody but Faumui knew which school he was going to choose. He wouldn’t let his coaches or parents see the paperwork before the ceremony, and he wouldn’t let them watch over his shoulder as he signed.

Nobody knew where he was going until he was officially a Cavalier.

“It was tough, because growing up I always dreamed about going to Hawaii,” Faumui said. “I prayed on it for a long time. After I signed, I showed my family and they were happy but at the same time sad.”

The family was happy to see him achieve his dream of playing Division I football. There was considerably less exuberance about him doing it more than 4,000 miles away.

But Faumui knew that was what it was going to take to achieve his dreams.

“You’ll never get better if you’re comfortable, and I had to get out of my comfort zone,” Faumui said. “I decided to come to Virginia, far away from home, and it forced me to grow.”

Faumui wasn’t focused on winning a starting job last summer when he first stepped on Grounds.

“My goal was to make the travel team, but hard work doesn’t go unnoticed,” Faumui said. “So, I just worked hard over the season and I’m really glad to have had that experience.”

Thanks in part to a lack of healthy bodies and quality depth, Faumui was forced into action right away last fall. He made the first of four starts at N.C. State, and it didn’t take long for him to stand out.

“I think it was the first game he played. He just smacked somebody,” So’oto said. “The quarterback rolled out and threw a little pass to a back in the flat and he nailed him. I hadn’t seen that in him before then.”

So’oto said Faumui put on a lot of “bad weight” last year, so this offseason was all about slimming down, adding muscle mass and “just refining everything,” So’oto said.

“He got in the weight room and now you can tell it’s a mentality with him,” So’oto said. “He carries it on the field. It’s one thing to do an assignment, but how he does it kind of separates him from everybody else.”

This year, that title goes to Faumui.

The return of Burney and fellow defensive end Mandy Alonso made an impact in the season opener at Heinz Field, but as soon as he stepped on the field, Faumui looked a step faster and more determined to get into the backfield than a year ago. And he did so right out of the gate.

In Friday’s win over William & Mary, he started at defensive end and shared a half a sack with linebacker Jordan Mack.

“Aaron is growing into his role on our defensive front, and he’s growing into the physical nature of the position,” Virginia head coach Bronco Mendenhall said. “He’s becoming more assignment sound, and with that he’ll continue to gain our trust and the trust of his teammates.”

Count Alonso among the teammates Faumui already has the full confidence of. They’re similar in stature – both around 6-foot-1 and 280 pounds – and their playing styles mirror one another. So’oto called them both “quick and twitchy,” and he said they naturally gravitated to each other like “peas in a pod.”

“Me and him, we just feed off each other,” Alonso said. “We’re really tight, and it’s awesome to play with him and create chaos on the offensive line.”

Faumui is far from the family and friends he grew up with, but with Atuaia watching over him and Alonso beside him in the trenches, he feels right at home.