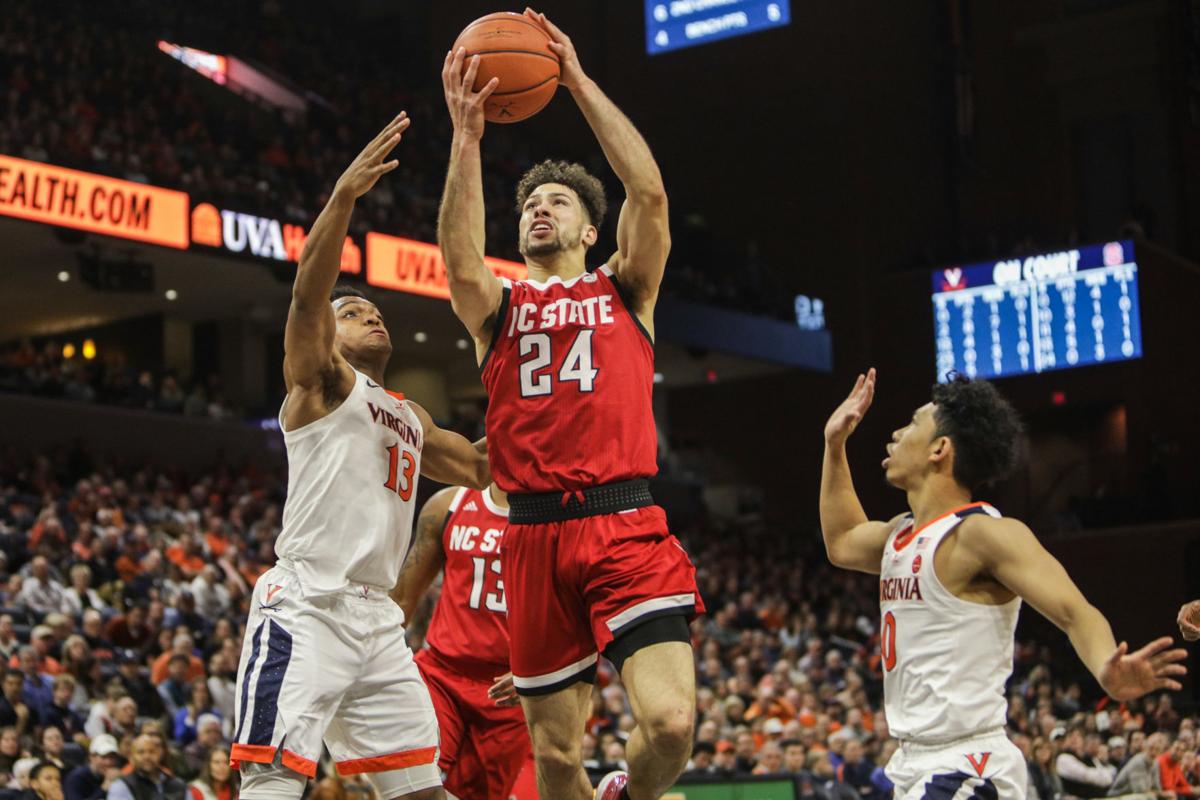 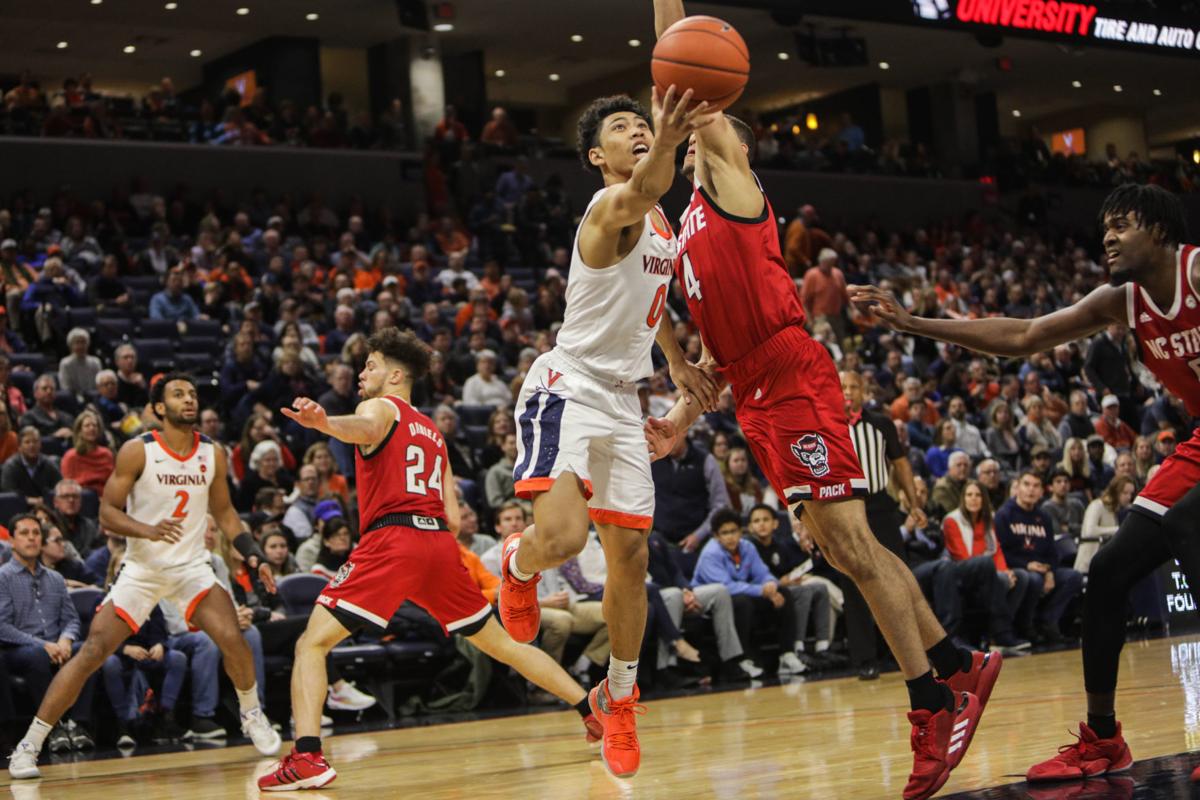 Virginia’s Kihei Clark (0) slips past two N.C. State defenders in the second half at John Paul Jones Arena on Monday.

Virginia’s Kihei Clark (0) slips past two N.C. State defenders in the second half at John Paul Jones Arena on Monday.

Virginia faced an 11-point second-half deficit when it turned to Francisco Caffaro. The redshirt freshman sparked a defensive charge to lead the Cavaliers back into the game, but ultimately, Virginia ran out of gas down the stretch.

N.C. State survived a 10-minute stretch without scoring and missed free throws to beat Virginia, 53-51. C.J. Bryce and the Wolfpack made just enough plays in the final minutes to gut out an ugly, yet thrilling, win. It was N.C. State’s first win over Virginia in Charlottesville since 2005.

“We knew coming in that this is a tough place to play and Virginia is a tough program to play against because they’re so great on the defensive end,” N.C. State head coach Kevin Keatts said. “I told the guys before the game, if we’re gonna win the game, it’s gonna be because we have to defend them because I knew the score was gonna be low.”

Neither team found any separation in the first half. The largest lead for the Wolfpack was four points, while the Cavaliers led by two in the early portion of the half.

The Wahoos (12-6, 4-4 ACC) started off hot from the field, but they also committed six turnovers in the opening portion of the game.

Virginia went inside early and often, using Mamadi Diakite, Jay Huff and Braxton Key to attack the basket and take 2-point shots. Key, who led the team with eight first-half points, took 10 shots in the opening 20 minutes. Of Virginia’s 26 shots in the opening period, 22 were 2-pointers.

In the waning stages of the first half, UVa cut down its turnovers, but then the shooting cooled off dramatically. The Wolfpack led 28-26 at the break despite shooting 0-of-7 from beyond the arc.

N.C. State finally found some separation in the second half as the 3-pointer started to drop. The Wolfpack opened the half on a 14-5 run to take a 42-31 lead with 13:45 remaining in the game. A Bryce 3-pointer after a missed layup from Casey Morsell led to a transition opportunity for Wolfpack. Bryce buried the shot and forced Tony Bennett to take a timeout.

N.C. State opened the half making three of their first five attempts from beyond the arc.

While the Wolfpack were busy filling up the basket, Bennett’s group struggled to score a single point. The Cavaliers went 6:37 without scoring a basket as the Wolfpack slowly opened up their 11-point lead.

“I think the start of the second half for us defensively was not a good start,” Bennett said. “Good offense by them. They made some tough shots, but our defense was not where it needed to be.”

Caffaro entered the game with 11:27 left in the second half, and quickly scored a layup to break Virginia’s scoring drought. The basket started a 15-0 run for the Cavaliers.

The run came slowly and was fueled by defense. Spanning more than 10 minutes, the run featured a few Virginia baskets, but it mostly featured quality defense and defensive rebounds from the Cavaliers as the fans became increasingly loud.

Caffaro played a role in the run, as his physical play frustrated D.J. Funderburk, who had been N.C. State’s best player. He fouled out with 6:48 remaining after a couple brush-ups with Caffaro.

The redshirt freshman added a few baskets in the post, and Morsell finally found the rhythm on his shot.

Morsell knocked down a jumper to cut the deficit to 42-39 with 7:23 in the second half. The next defensive possession belongs in a tutorial video.

Virginia rotated beautifully and the possession ended with Morsell stripping a jump shooter as he went up. Virginia fans roared.

Caffaro drew Funderburk’s fifth foul on the next trip up the court and made a pair of free throws. After a stop, Morsell buried a 3-pointer in front of the Virginia bench to give the Cavaliers a 44-42 lead. Morsell sported a huge smile after the make.

Unfortunately for the Cavaliers, the smiles wouldn’t last.

Punctuated by a Bryce jumper as the shot clock expired and the game clock sat at 27 seconds, the Wolfpack rattled off a 7-0 run when trailing 47-45 to take a 52-47 lead.

Virginia landed one last punch, making two free throws before the Wolfpack missed the front end of a one-and-one. Trailing 52-49, Virginia found Huff for an open 3-pointer at the top of the key to tie the game in the final seconds. He missed long and the ball bounced over the top of the backboard.

Another missed N.C. State free throw led to a chance for UVa. The Wolfpack fouled Clark to avoid a possible 3-pointer. Clark made both free throws to trim the lead to 52-51. N.C. State only made one of their final two free throw attempts, which gave Virginia a chance.

Morsell snagged the rebound, dribbled up court for a game-winning 3-pointer over two defenders, but missed short.

“I was trying to get it to Kihei quick,” Morsell said. “I didn’t see him quick enough. I realized that time was running down, so I couldn’t look to pass because there wasn’t that much time to really make a play … time was ticking, so I had to let it go.”

Virginia fans fell silent before slowly heading to the exits.