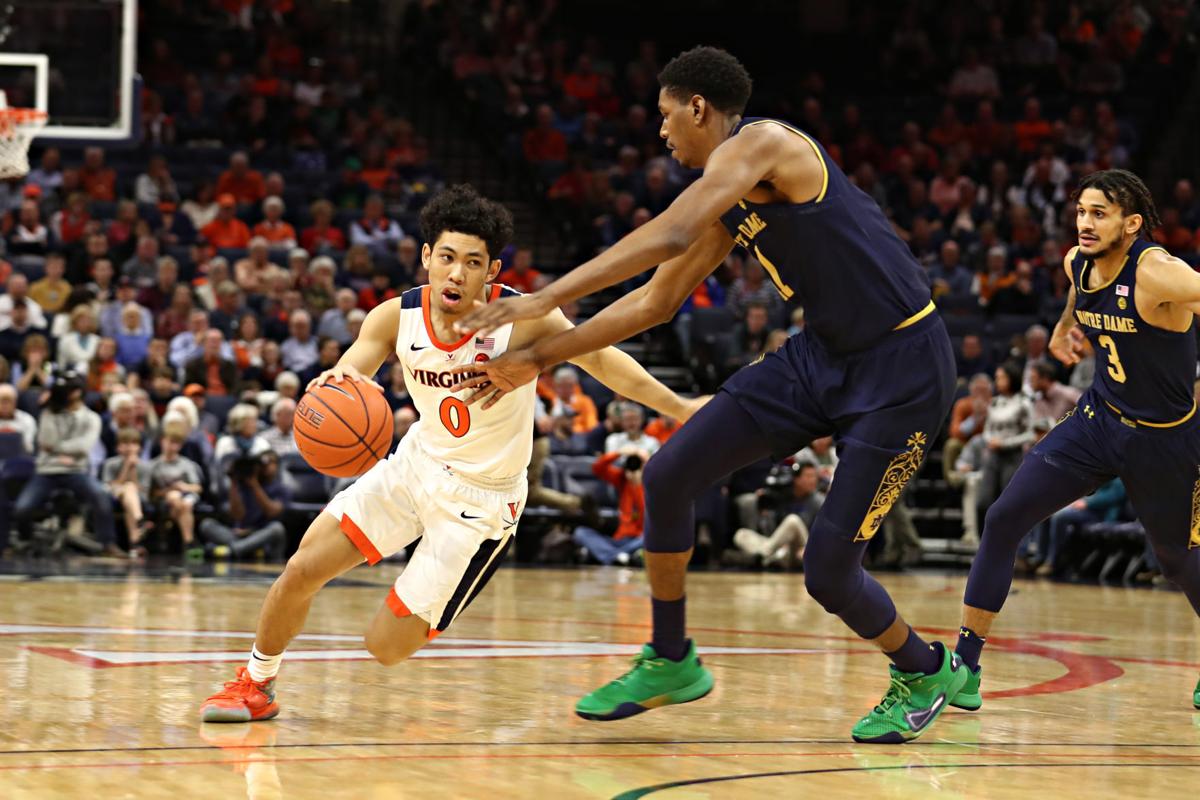 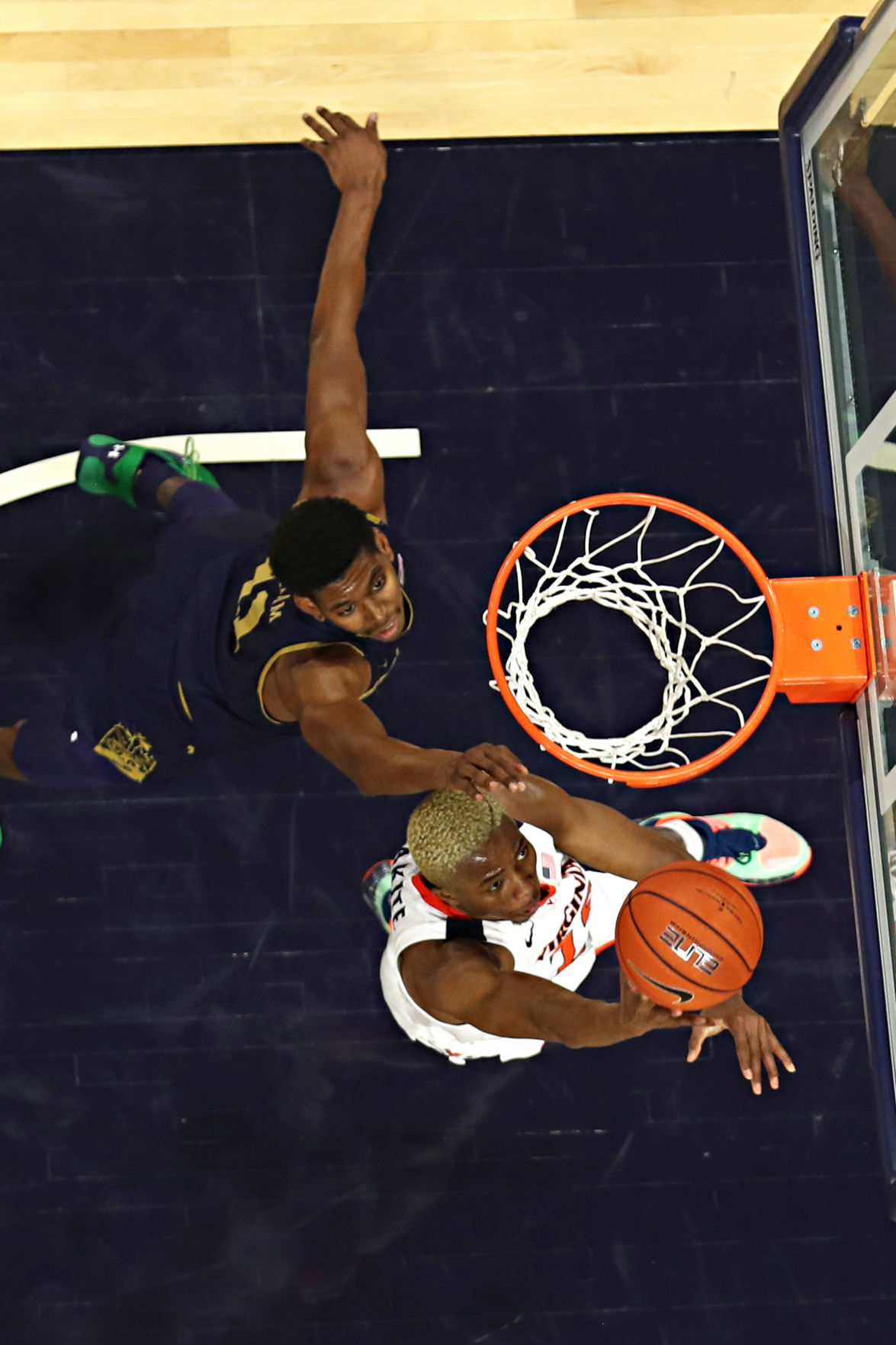 Virginia forward Mamadi Diakite (below) goes up for a shot against Notre Dame on Tuesday at John Paul Jones Arena.

Virginia forward Mamadi Diakite (below) goes up for a shot against Notre Dame on Tuesday at John Paul Jones Arena.

In the win and loss column, the Cavaliers were 15-7, and the Fighting Irish were 15-8. On paper, fans were in for a good game. On the court, it took five extra minutes to determine a winner between the ACC foes.

The game was far from beautiful.

Virginia (16-7, 8-5 ACC) outscored Notre Dame by a 3-2 margin in the overtime period, but the victory gives the Cavaliers a quality win over a fellow bubble team. The win came despite UVa making just one field goal in the final 11 minutes and 45 seconds of the game.

“Defense wins ball games is about all we can say about that,” Virginia forward Jay Huff said.

The first half, like much of the game, featured an array of missed shots and solid defense on both sides. Virginia, which made 11 of its 22 3-pointers against Louisville, went 1-of-8 from beyond the arc in the first half and 5-of-20 for the game. Tomas Woldetensae buried the Cavaliers’ first attempt before they missed their next seven.

Fortunately for Virginia, it found offense in the paint. Mamadi Diakite led the Cavaliers with nine first-half points thanks to a few solid post moves against a stingy Notre Dame defense. Diakite looked the part of an NBA prospect as he used quick dribbling and head fakes to get to the rim. He finished with 20 points and five rebounds.

Kihei Clark only took two shots in the first 20 minutes, but he scored on both. Each bucket featured a shot fake and a leaning floater from the lane as he jumped toward the basket. Virginia struggled from 3-point range in the opening half, but the 2-point shots were effective.

With the 3-pointers not falling, however, the Fighting Irish took advantage of 5-of-12 shooting from beyond the arc to take a 26-22 lead heading into halftime.

The second half proved slightly more kind to Virginia jump shooters. The Cavaliers knocked down a pair of 3-pointers in the first seven minutes of the final 20 minutes and went 4-of-12 after halftime.

While Notre Dame found success outside the paint in the first half, Mike Brey’s club made a stronger effort to attack the paint in the second half. John Mooney found a few points around the rim and Notre Dame kept its lead. He finished with 11 points and 14 rebounds.

The Cavaliers fought back and tied the game on a Huff 3-pointer — his first since a go-ahead jumper in the final minute of regulation against Wake Forest on Jan. 26 — with 9:51 remaining. On the ensuing possession, Virginia locked in defensively and forced a wild shot that resulted in an air ball and a shot-clock violation. Brey determined he had seen enough and called timeout for Notre Dame.

After the timeout, Virginia went to Huff in the post and he added another two. After a defensive stop, Huff buried a 3-pointer from the top of the key to close out an 8-0 run accomplished by himself. Virginia took a 43-38 lead before a Notre Dame layup cut the deficit to three points. Prior to his scoring outburst, Huff hadn’t scored in the game.

Diakite finally ended the scoring drought with a fadeaway jumper from the free-throw line to tie the game at 47 with 25 seconds remaining. With fouls to give, Virginia fouled Notre Dame a few times as the Fighting Irish dribbled around, trimming the clock to just three seconds. The Cavaliers blocked a potential layup, and overtime ensued.

Trailing by one, Notre Dame had a chance to win the game on a 3-pointer, but the shot missed and Braxton Key lobbed the rebound into the open court. Clark chased it down, threw it into the air and the crowd rejoiced as the Cavaliers secured a gritty win.

“We missed free throws, we had some key turnovers down the stretch, and they missed some open shots,” Virginia coach Tony Bennett said as a smile came across his face, “but we’ll take it.”

Virginia’s unique style shined through in win over Notre Dame

Flip on ESPN’s “SportsCenter” and take note of the basketball highlights. The package of best visuals of the night typically includes high-fly…