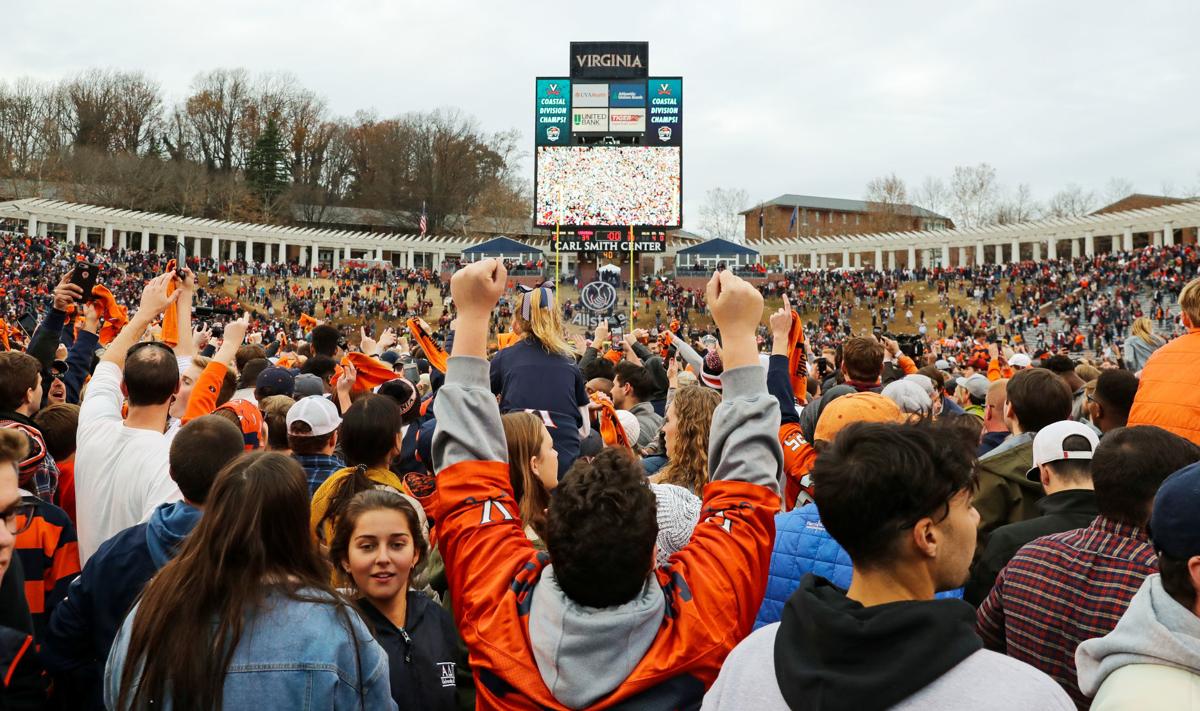 Cavalier fans rush the field at Scott Stadium to celebrate after Virginia defeated Virginia Tech, 39-30, to win the Commonwealth Cup and the team's first ACC Coastal Division championship on Friday. 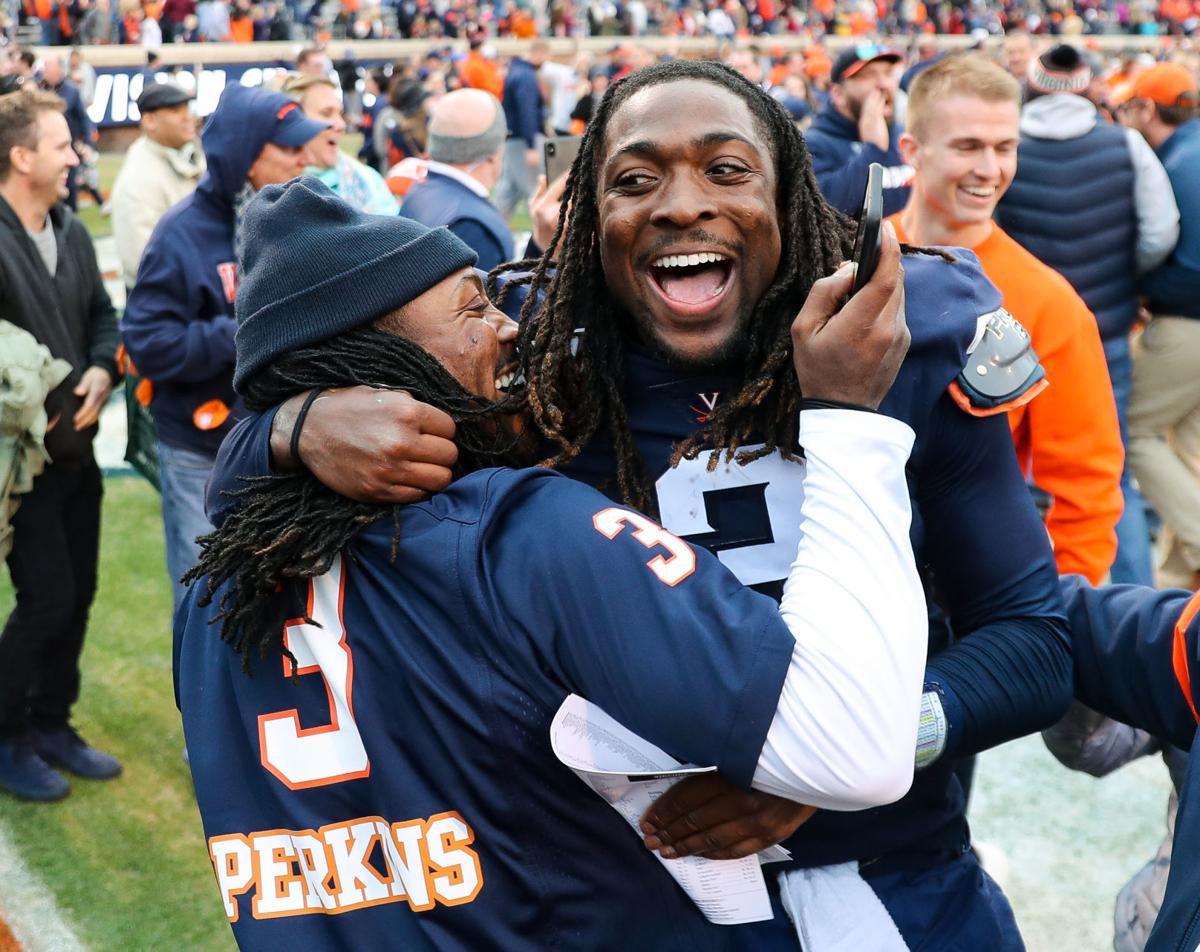 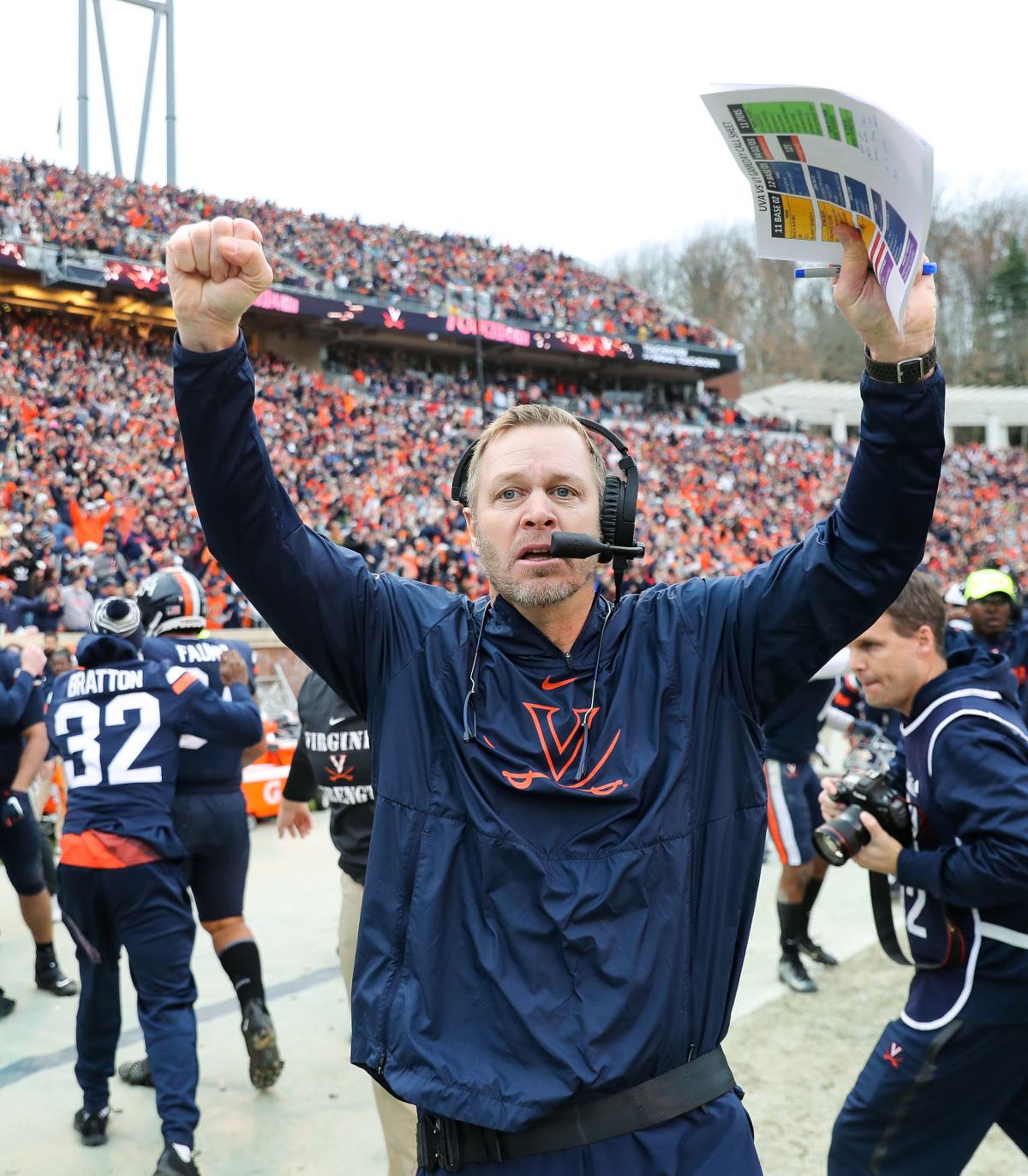 Virginia head coach Bronco Mendenhall celebrates in the final seconds of the Cavaliers’ win over the Virginia Tech Hokies at Scott Stadium on Friday.

Cavalier fans rush the field at Scott Stadium to celebrate after Virginia defeated Virginia Tech, 39-30, to win the Commonwealth Cup and the team's first ACC Coastal Division championship on Friday.

Virginia head coach Bronco Mendenhall celebrates in the final seconds of the Cavaliers’ win over the Virginia Tech Hokies at Scott Stadium on Friday.

For the first time since 2003, the Commonwealth Cup will reside in Charlottesville.

Kicker Brian Delaney gave Virginia (9-3, 6-2 ACC) a 33-30 lead with a 48-yard field goal with 1:23 remaining, then the Cavaliers’ defense sealed the win when defensive lineman Eli Hanback recovered a Virginia Tech fumble in the end zone for the game-clinching touchdown with 1:01 remaining.

“This means the world to me,” Hanback said. “The last time we beat Virginia Tech, I was 7 years old. I’m 23 now. To be on the team that broke the streak is the best feeling in the world.”

Making Friday’s win even sweeter for the Cavaliers was the fact that it clinched the first Coastal Division championship in program history. Virginia will play Atlantic Division champion Clemson in the ACC Championship Game next Saturday night in Charlotte, North Carolina.

“Ever since [winning the Belk Bowl last season], we have been working as a team to get to be exactly here,” said Virginia quarterback Bryce Perkins, who finished with 311 yards and one touchdown passing to go along with his 167 rushing yards and two touchdowns on the ground. “We talked about it all year: ACC champs, beat Tech. Everything that we have done all year in practice and in games has led us to this moment right here.”

And what a moment it was.

When the clock finally hit zero and the victory was secured, Virginia fans poured on to the field for a raucous victory celebration that had eluded the Cavaliers in this rivalry for so many years.

“After the game, everybody [on the field] was telling me, ‘thank you,’” said Virginia linebacker Noah Taylor, who finished with six tackles, one sack, two interceptions and one pass breakup.

Beating your rival for the first time since George W. Bush’s first presidential term will create that kind of gratitude.

Another person who was feeling thankful following Friday’s win was Virginia football coach Bronco Mendenhall, who shared his gratitude for the Cavalier fans who came to Scott Stadium and helped to create an atmosphere that Mendenhall could only dream of when he took over a struggling program four years ago.

“For all those who attended today, I am grateful for their attendance, their support and for what it looked like in Scott Stadium,” said a visibly emotional Mendenhall, who fought back tears several times during the post-game press conference. “I had a vision of what that could be four years ago and today was as close as to what I have seen to what is possible at Scott Stadium.”

Amidst the chaos of the postgame celebration, Ryan Nelson made sure to hang onto the latest addition to the Virginia football trophy case. The sophomore offensive lineman grabbed the Commonwealth Cup, which goes to the winner of this game each year, and fended off any would-be takers.

“At first, it was just awesome holding the cup, but then I quickly realized that if I didn’t hold onto it, then someone was going to take it,” Nelson said. “People kept running and trying to grab it. I just held it up and honestly had to push people out of the way.”

Being an offensive lineman, Nelson has a pretty good knack for protecting things. He kept the cup safe, beginning the Cavaliers’ ownership of the trophy for the next year until the teams meet again next season in Blacksburg.

“It’s awesome,” Virginia defensive lineman Mandy Alonso said of ending the losing streak to Tech. “It feels like a burden has been taken off of us.”

For the first time since Oct. 6, the Virginia football team is back in the AP Top 25 poll.

Virginia stunned by UMBC, becomes first No. 1 seed to lose to a 16 seed

Counts: Virginia falls short of ACC Tournament title, but all is not lost