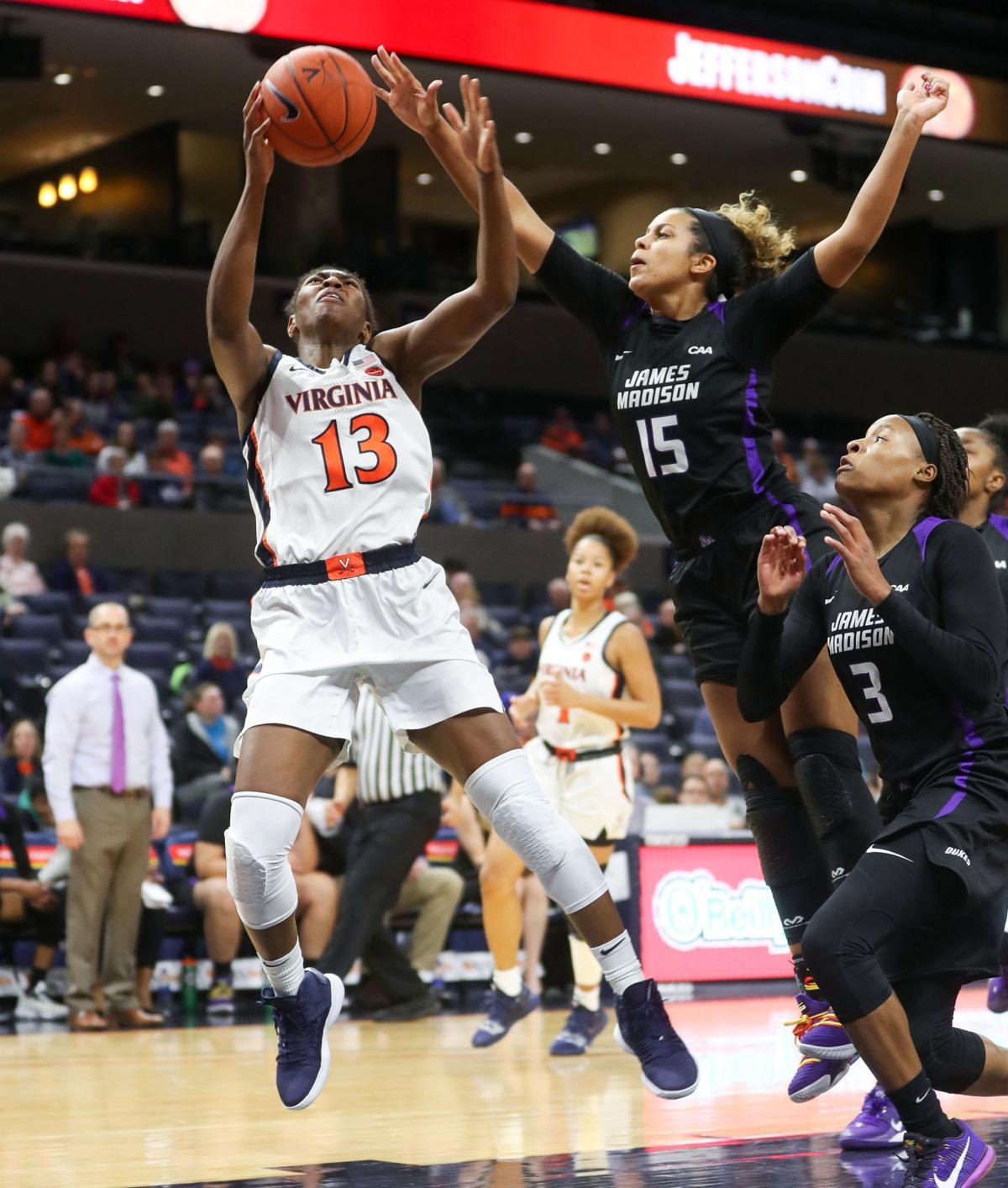 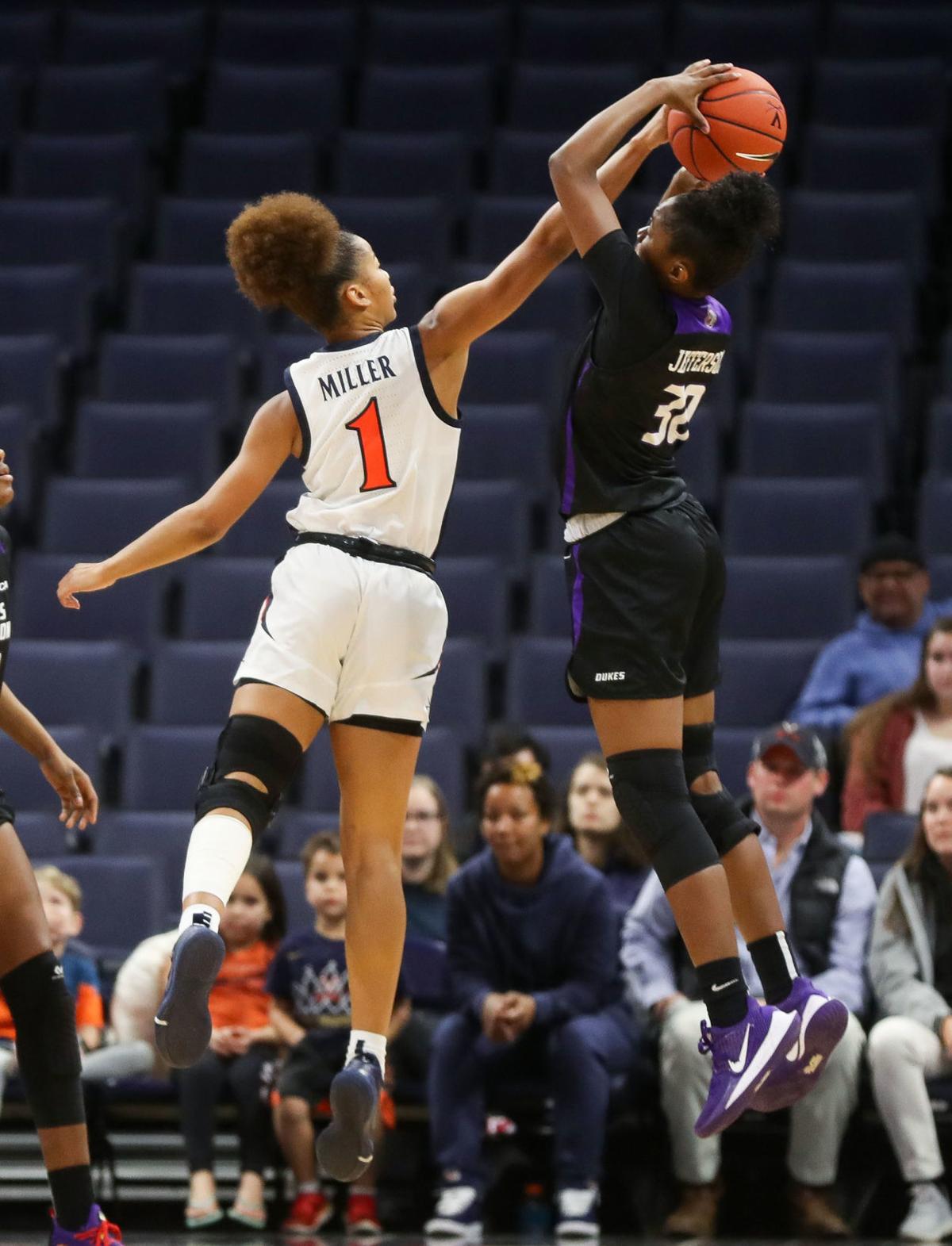 Jocelyn Willoughby recorded her third double-double of the season to lead the Virginia women’s basketball team to a 55-49 victory over James Madison on Saturday in the opening game of the Cavalier Classic at John Paul Jones Arena.

After Smalls scored the first bucket of the game to give JMU a 2-0 lead, Virginia went on a 19-0 run over the next 6:32 to build a 17-point advantage. The Cavaliers held the Dukes without a point for 8:05 during the opening quarter.

While the UVa defense locked down the Dukes, Willoughby went on her own personal scoring barrage in the first quarter, racking up 15 points and eight rebounds in the first 10 minutes of the game.

“We came out and we were cooking,” Virginia coach Tina Thompson said. “We were making difficult and timely shots and allowing our offense to create opportunities for us.”

JMU answered with an 11-0 run to open the second quarter before Kylie Kornegay-Lucas knocked down a pair of free throws with 2:37 to go in the first half to give UVa a 25-18 lead. The free throws would be the only points of the second quarter for the Cavaliers, who did not hit a field goal during the entire period, but still managed to lead 25-20 at the break.

“We got a little bit stagnant in the second quarter, but we continued to fight,” Thompson said, “and our team continued to show up and try to create opportunities for ourselves.”

Virginia’s struggles continued early in the second half. JMU scored the first eight points of the third quarter to take a 28-25 lead with 3:18 to play in the frame. The Dukes took a 39-35 lead into to the fourth quarter, then extended it to 43-35 with 8:31 to play in the game on a layup from Kayla Cooper-Williams.

Virginia climbed back into the game with an 8-1 run over the next four minutes. Six of the eight points in the run came from Willoughby, whose jumper with 2:57 remaining gave UVa a 45-44 lead.

The Cavaliers would not trail again.

Willoughby iced the game with a 3-pointer with 37 seconds left that extended Virginia’s lead to 50-46. The Cavaliers went 5-for-6 at the free throw line to see out the win. Virginia outscored JMU 20-10 in the fourth quarter.

The Cavaliers shot 36 percent from the field (19-of-53) while holding JMU to just 30 percent (17-57). It’s the fifth time this season the Cavaliers have held an opponent to 30 percent shooting or lower.

“We turned up our defense and I’ve said several times before that we’re rooted in our defense,” Thompson said. “Our defense for sure won the game for us tonight, along with some pretty big plays by [Willoughby and Jablonowsi].”

Virginia hosts No. 11 UCLA on Sunday to wrap up the Cavalier Classic. Tip-off is set for 3:30 p.m. It will be the final home game for Virginia until Jan. 2.