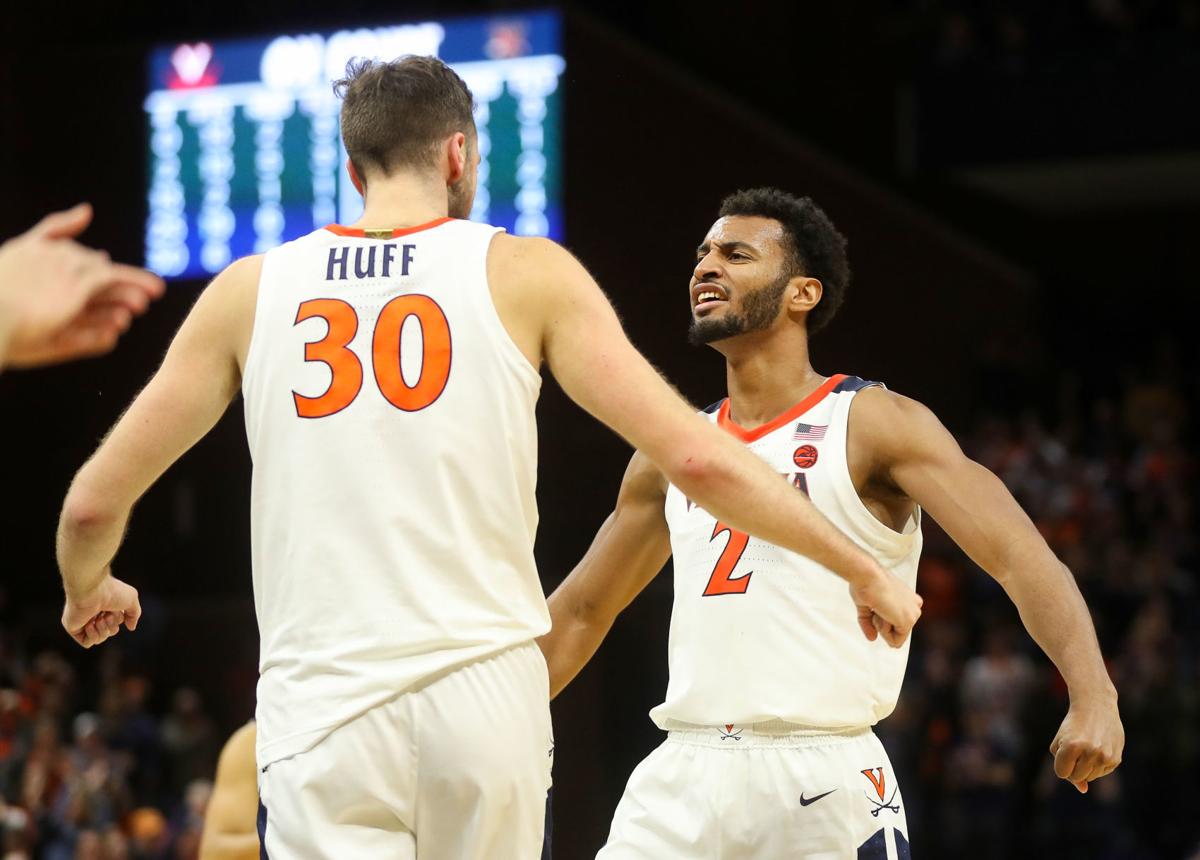 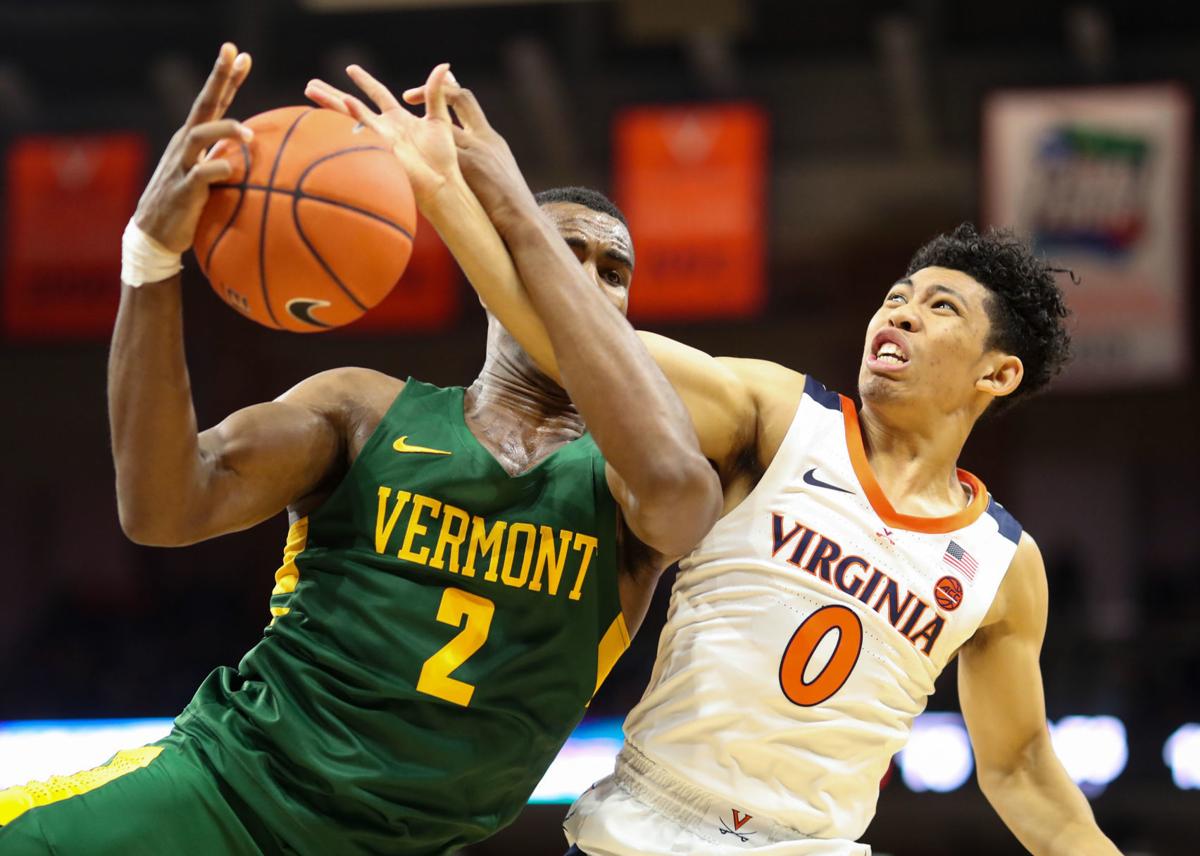 Virginia guard Kihei Clark (right) battles for the loose ball with Vermont center Daniel Giddens during the first half of Tuesday's game in Charlottesville.

Virginia guard Kihei Clark (right) battles for the loose ball with Vermont center Daniel Giddens during the first half of Tuesday's game in Charlottesville.

The Virginia men’s basketball team’s identity is defense, but when the Cavaliers needed points in Tuesday’s 61-55 win over Vermont, they found them.

Virginia (4-0) faced its first second-half deficit of the season after Vermont’s Anthony Lamb put on a shooting performance that reminded Wahoo fans of Purdue’s Carsen Edwards. The Catamounts’ star hit 3-point shot after 3-point shot, as the crowd in JPJ Arena groaned.

Lamb was feeling it.

Diakite finished with a career-high 19 points and showcased improved shooting range, nailing all three of his shots from beyond the arc. Each game he shows NBA scouts how he’s improved his game.

“I haven’t had a lot of chances in the season yet to prove everything, but step by step, we’ll be able to get there,” Diakite said with a wry smile.

To open the game, Vermont (4-1) raced out to a 7-0 lead, as Virginia turned the ball over three times and looked sluggish out of the game.

After a hot start, the Catamounts cooled off dramatically. They scored seven points on 3-of-4 shooting in the first 2:25 of the half before scoring just 11 points on 4-of-19 shooting the rest of the half.

“I think in the first half, we didn’t come out ready,” Clark said. “We all just kind of locked in even more and kind of got into the game.”

Virginia put Diakite on Lamb, and the lengthy redshirt senior bothered one of the best mid-major players in the country. Lamb scored five points in the first half on 2-of-7 shooting and turned the ball over four times.

He hit a deep jumper just inside the 3-point line in the opening minutes of the half before nailing a 3-point shot in the closing seconds of the half. In between, he struggled to find any space.

The Cavaliers reeled off a 14-0 run after Vermont led 7-0, but it wasn’t due to hot shooting. It took the Cavaliers 8:10 to rip off the 14-point run, as the Cavaliers relied on tight defense to keep the Catamounts off the scoreboard.

Both teams struggled to shoot in the first half. The defenses played well, and both teams missed open shots. Virginia took a 24-18 lead into the break.

Lamb found his touch in the second half, scoring 13 points in the first eight minutes of the half. Vermont pulled ahead 34-31 after the senior buried a pair of 3-pointers on consecutive possessions. Virginia had taken a 31-28 lead on a quick five-point run that featured a Clark 3-pointer and a Diakite dunk.

Vermont’s star continued his scorching pace as the second half progressed. He had a stretch in the second half where he poured in 17 consecutive Vermont points during a five-minute stretch ending at the 9:40 mark. Vermont led 40-36 before Virginia went on a run of its own.

The Cavaliers went on a 10-0 run over the next three minutes. Vermont quickly responded, and the Catamounts led 49-48 after Lamb made three free throws. He finished the game with 30 points, including seven makes from 3-point range.

“I told our guys after, I said, ‘There’s a saying, Fool me once, shame on you. Fool me twice, shame on me,’” Bennett said. “Or maybe fool me seven times. He hit some great shots. He did, but I think two or three we [were] just like, ‘We’ll you’re not gonna shoot that.’”

Lamb took advantage of a few open looks when Virginia didn’t expect Lamb to launch jumpers, and those pushed Vermont into the lead late.

UVa responded with a 7-0 run of its own in a game that felt like an NCAA Tournament battle. Diakite made a layup to give Virginia a 50-49 lead. Huff added a put-back layup to increase the lead to 52-49.

A Key 3-point shot with 4:20 remaining gave Virginia a 55-49 lead, and sent Cavalier fans into pandemonium.

“Kihei saw me, I told him I’d make one,” Key laughed as Clark gave him a look in the postgame press conference. “I think I missed one prior to that, just kind of same spot, and just knew I’d make one.”

Key made the shot in the biggest moment of the night, and Virginia pulled ahead for good.

Vermont’s offense struggled to generate points down the stretch after the Catamounts seemingly couldn’t miss for minutes on end. Lamb failed to score in the final five minutes of the game.

Virginia closed the game on a 12-6 run to pick up a gritty victory over a good Vermont team.

The game is a part of the Air Force Reserve Tip-Off Tournament, which continues this weekend in Connecticut. Not every mid-major in the tournament faces Virginia, but Vermont, Columbia and Massachusetts were saddled with the task of playing Bennett’s squad.

“No, I didn’t want to play Virginia,” Vermont head coach John Becker said. “I don’t think anyone wants to play Virginia … but it was a cool experience to play the defending national champs.”