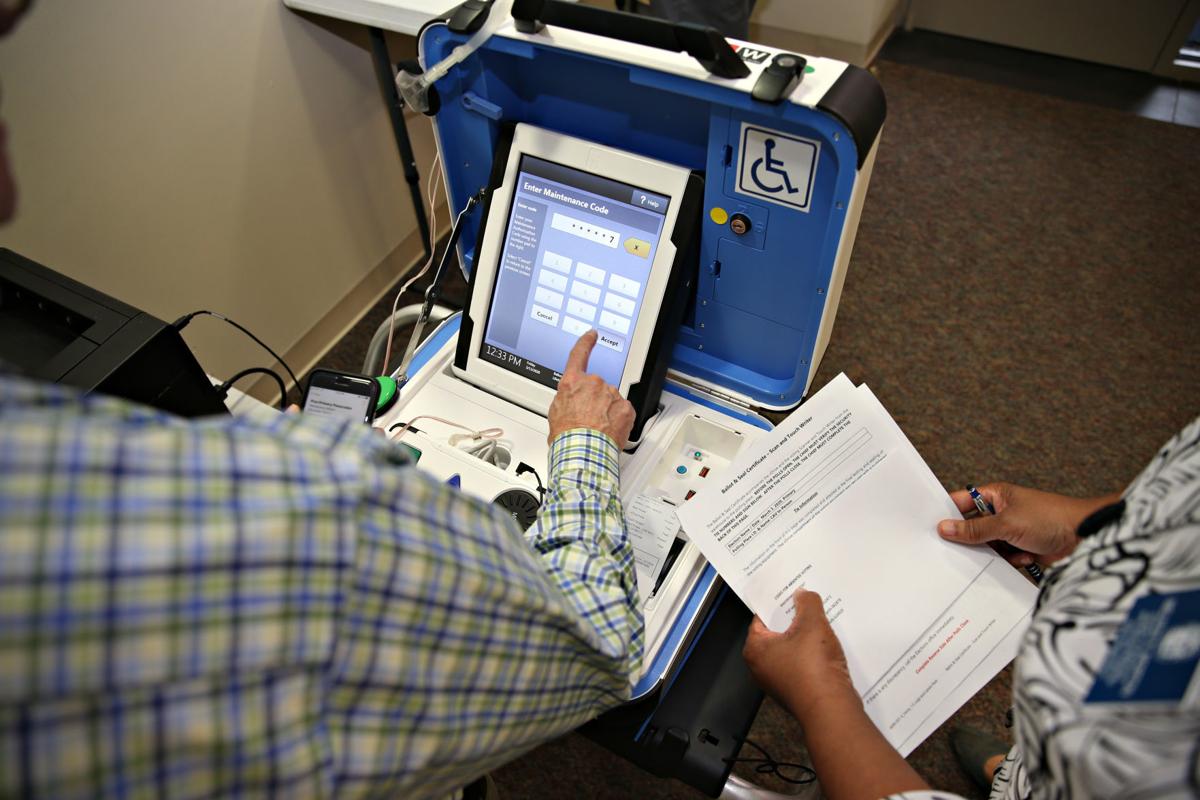 Election officials secure the absentee voter machine during a logic and accuracy test of the machine at Charlottesville’s Voter Registration and Elections Office on Monday. 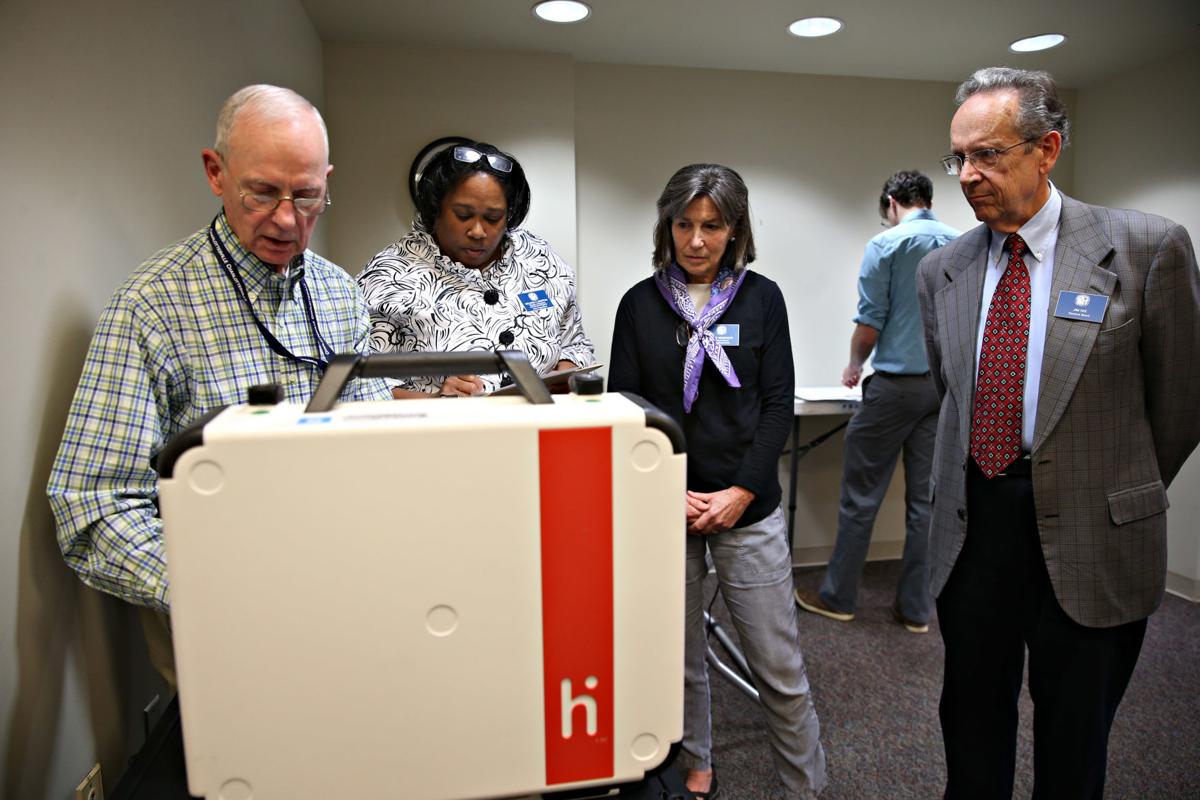 Election officials secure the absentee voter machine during a logic and accuracy test of the machine at Charlottesville’s Voter Registration and Elections Office on Monday.

They cast and counted the ballots, tested the machinery, cleared the memory and locked down the equipment until the absentees come to vote.

Members of the Charlottesville Electoral Board joined staff in the city registrar’s office Monday to make sure electronic ballot machinery for the upcoming Democratic Party presidential primary performs perfectly.

No Republican Party primary is scheduled as President Donald Trump is the presumed GOP nominee.

The voting equipment includes an electronic ballot scanner/counter to read hand-marked ballots and tally votes. It also features a computerized electronic ballot generator/printer for persons with disabilities that make filling out a hand ballot difficult.

“We made up a definite number of ballots with votes for each candidate on the primary ballot and ran them through the scanner. We then check the totals to make sure that the machine is accurately counting votes for each candidate,” said Jim Nix, of the electoral board. “Once we know it’s performing properly, we’ll lock it up until we start the absentee balloting.”

The equipment tested on Monday will be ready to receive voters’ choices when in-person absentee voting begins on Friday and continues through Feb. 29. The scanner is the same as 17 others that will be tested and deployed in precincts for the March 3 primary, officials said.

“We want everything to be secure, so we test it to make sure that it’s working properly,” said Anne Hemenway, chairwoman of the electoral board. “You’re only allowed to vote for one candidate and if a ballot is marked for two, we want to make sure that the machine returns that ballot to the voter. If the voter intended to vote for two and puts it back into the machine, it will give back a message that the vote will not be counted.”

The same is true if no candidate is chosen on a ballot, Hemenway said.

“It will spit it back and out and inform the voter that no vote was cast,” she said. “If the voter puts it back through, perhaps as a protest vote, it will notify the voter that there is no vote to be counted.”

Board members then cleared the machine’s memory, locked it up and sealed it until in-person absentee voting starts.

While voting absentee in person may sound like an oxymoron, it is a real thing. Voters who fit into one or more of 20 recognized reasons for voting absentee can stop by the downtown office, fill out an application, show their identification and cast away.

The deadline to register to vote in the primary, or update an existing registration, is Feb. 10, according to the state elections department.

Those who are not able to vote in person can do it the old-fashioned way by downloading the absentee ballot application, filling it in and mailing it to their locality’s elections department.

The deadline to request a mail absentee ballot is Feb. 25.

The mail ballot then must be mailed to the local registrar’s office so that it is received before 7 p.m. on March 3.

Forms are available on registrars’ websites and can be downloaded at the Virginia Department of Elections website.

Absentee votes, whether in person or by mail, will not be tallied until after the voting ends on March 3. In fact, the machinery and software will not allow the votes to be counted until the polls close.

“Even if we wanted to find out how candidates were doing, we couldn’t,” Nix said. “We cannot get a total from the machine until after 7 p.m. on Election Day.”

Although they have suspended their campaigns, Cory Booker, Julian Castro and Marianne Williamson remain on the ballot, having qualified prior to backing out.

The board will test the equipment all over again before the June 9 primaries in which nominations for the state’s members of the U.S. House of Representatives will be decided.

U.S. Sen. Mark R. Warner is seeking re-election but no challengers have filed to run as of yet.

The filing deadline for U.S. House and Senate candidates is March 26.

The service also will be in place for the March 3 primary.

“We will have a poll worker come out and check them in with proper ID, just as we do every voter and then bring them a ballot to fill out,” said Melissa A. Morton, the city’s director of elections and registrar. “That ballot will be given to another worker at the precinct to scan so that no one knows how the person voted.”

Morton said the various deadlines and types of voting can be confusing.

“If anyone has a question, we’ll be glad to help,” she said. “They should feel free to give us a call.”

The city elections department may be reached at (434) 970-3250 or by email at vote@charlottesville.org.

Gianna Bryant, 13, was going to carry on a basketball legacy

US says mystery crash in Afghanistan was US army plane

Stay updated with our newsletters: