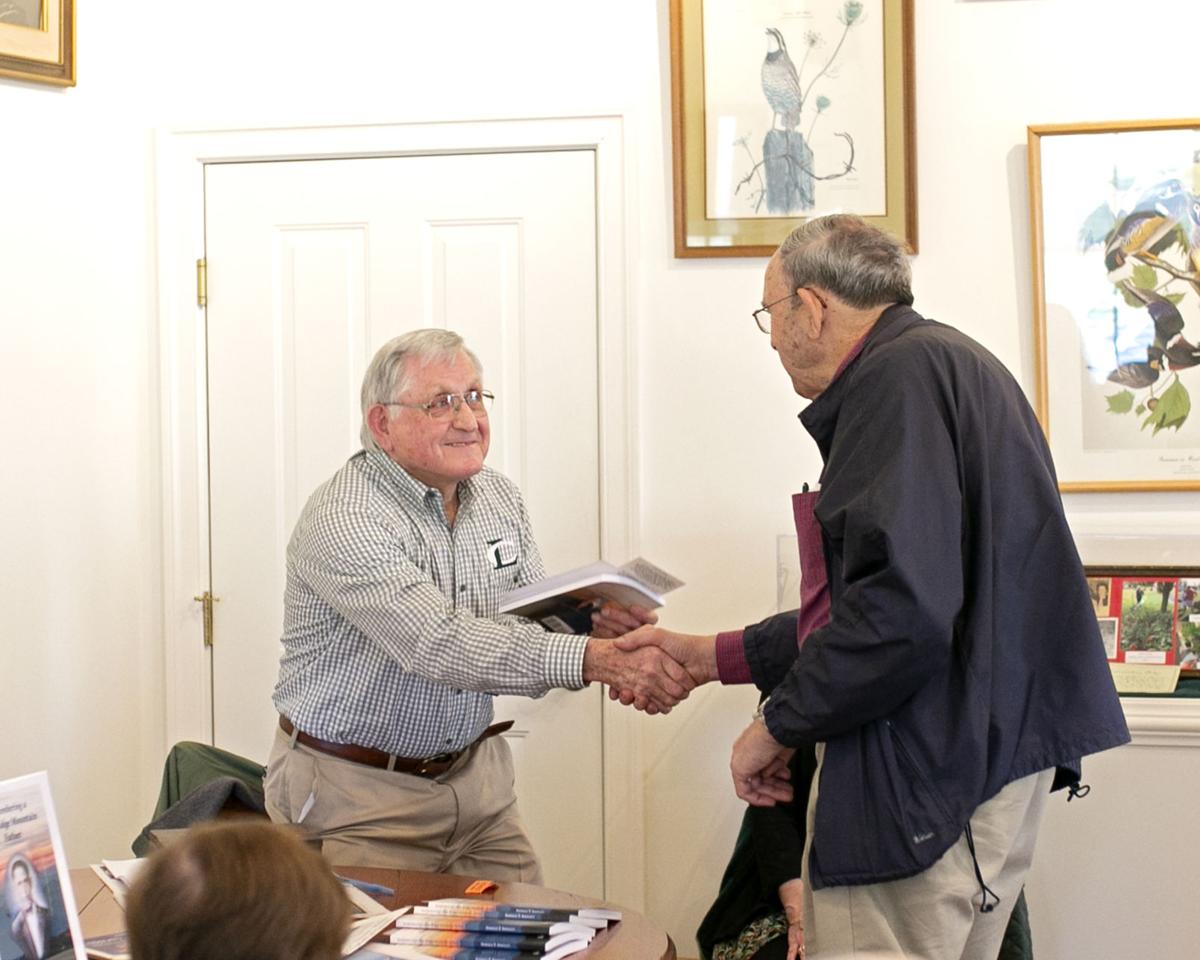 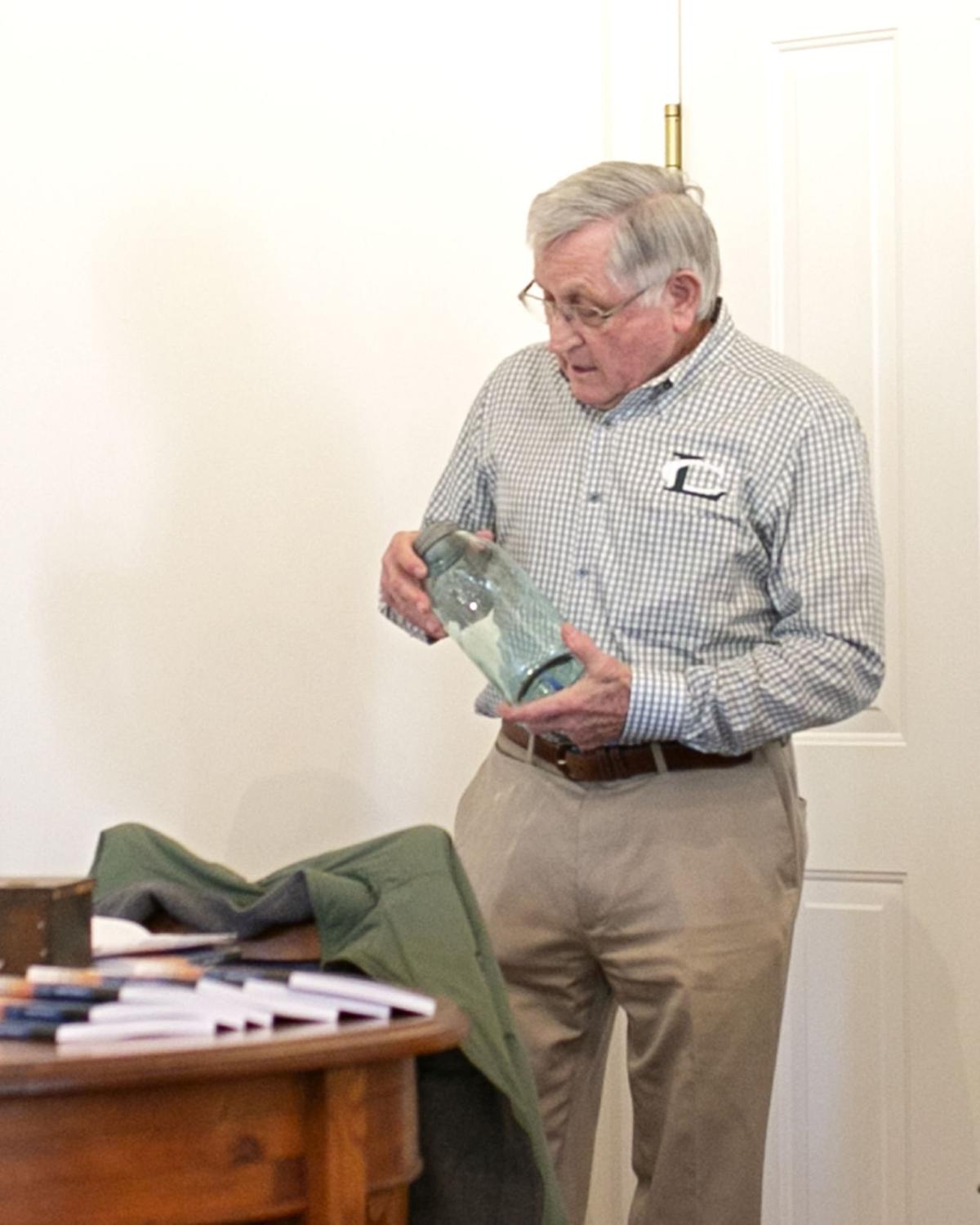 The Ball jar came off the mountain when the family was displaced by the government to create Shenandoah National Park. 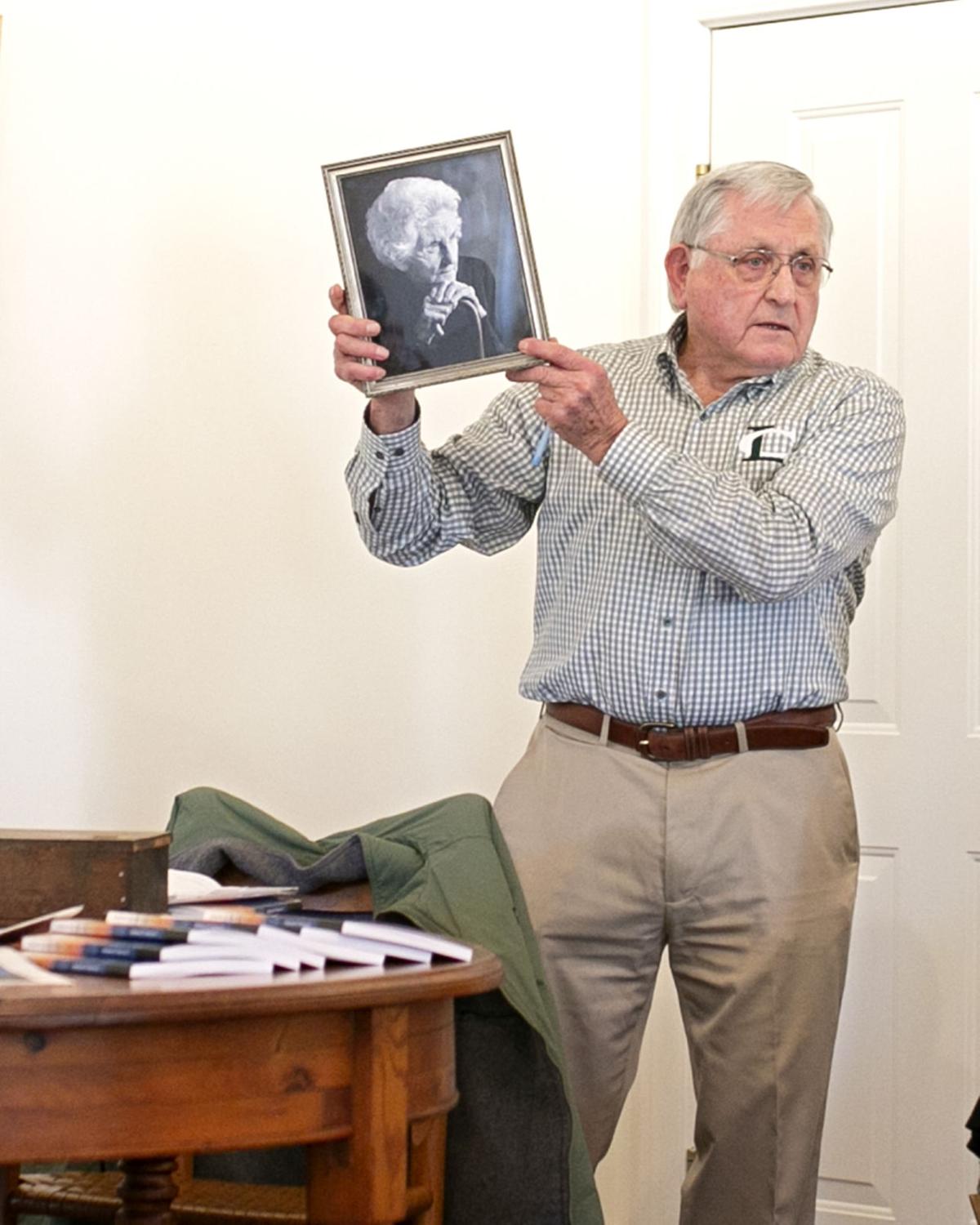 The author displays a photo of his mother Nelie Florence Shifflett taken right before she passed away at 94 years old. The photo was taken by award-winning Charlottesville photographer Jim Carpenter.

The Ball jar came off the mountain when the family was displaced by the government to create Shenandoah National Park.

The author displays a photo of his mother Nelie Florence Shifflett taken right before she passed away at 94 years old. The photo was taken by award-winning Charlottesville photographer Jim Carpenter.

The Greene County Historical Society hosted a book talk during its holiday open house last weekend with author Sherman T. Shifflett as he recalled his father, whose family was forced off the mountain to make way for Shenandoah National Park prior to his birth.

In “Remembering a Blue Ridge Mountain Father,” Shifflett talks about life as one of 11 kids to a George “Harvey” Shifflett, who never got over the “eviction” from his family’s 250-acre farm in Rockingham County.

Skyline Drive cuts through the farm about a mile south of Shenandoah National Park’s Swift Run Gap entrance. Some of his family moved to Rockingham, some moved into Greene County at Mutton Hollow and his family moved to Covesville in Albemarle County, where he was born in 1942. His mother, Nelie Florence Shifflett (not closely related) grew up in Dyke in Greene County.

He’s now working on his second book, this one about his mother.

With the encouragement of siblings and friends, Shifflett began documenting the stories he remembered and put them together for the book. He thought he’d just sell them to family and close friends. He’s now sold 650 books and has plans to add them to Amazon for sale in the future, too.

“I never dreamed that someone would want to read about something I wrote about something about my dad. But I noticed that book, it’s not so much about my dad and most of the responses I get are about the displacement,” he said. “I spoke to the Louisa [Daughters of the American Revolution] and they had 25 members present; only three knew about the displacement. It’s not taught in the history.”

Shifflett learned that his grandfather was paid $3,053 for his farm in 1933. His parents lived on a home on the property but did not own it. Those without deeds to the property were not paid anything when they were moved from the mountain.

Harvey Shifflett never got the mountains out of his system, though. After he retired from the apple orchards family members would take him up to the location of the farm on Skyline Drive where he’d sit on a rock wall and whittle for as long as they’d let him.

The Shifflett family wasn’t rich in Covesville and they raised or hunted for just about everything they ate.

“They wanted us to have an education. They said we want you to finish school. They didn’t really push us to be honor-roll students, which I never was,” Shifflett said. “They did not let us skip school much, except on hog-killing days.”

He said he learned some very valuable lessons from his parents, too.

“My dad was extremely honest; he used to tell us all the time you do not steal,” Shifflett recalled. “And he was really tough on us. He stressed that and it really is sunk in. I was about 4 or 5 years old and there was a vacant house up in the woods where I found a teddy bear and it was in real good shape. I didn’t have a teddy bear.

“Dad got home that night he said where did you get that?” Shifflett continued. “I said I found it in the old abandoned house. He said it’s not yours, you stole it. And I said dad the house is abandoned I didn’t really steal it. He said yes you did, it’s not yours. Take it back tomorrow morning.”

His mother taught him the value of money. While at Albemarle High School, Shifflett was a member of the Future Farmers of America and really wanted one of the jackets, which costs $6.

“She says, that’s a lot of money. You don’t need it. That’s a want. You have a jacket,” Shifflett said. “Why, I didn’t know that difference between wants and needs. I thought if you wanted something, you needed it.”

So, Shifflett got a job at a packing and shipping place in Covesville for 30 cents an hour. He saved enough to buy the jacket, which he still has.

“At Louisa County High School, I was in charge of the lockers and every year I had to supervise custodians when they cleaned them out,” he said. “You would not believe what kids left in their lockers—leather jackets, $129 Michael Jordan basketball shoes, expensive backpacks. I was thinking if they had paid for that stuff they would not have left it behind.”

Shifflett himself never had the chance to grow up on the farm in the mountains, though some of his siblings were alive and recalled it.

“I can’t explain this but every time I go to Elkton or Harrisonburg and I cross Swift Run Gap, I get this uplifting sensation,” he said. “I never lived there but I guess I still have the mountains in my system, in my blood.”