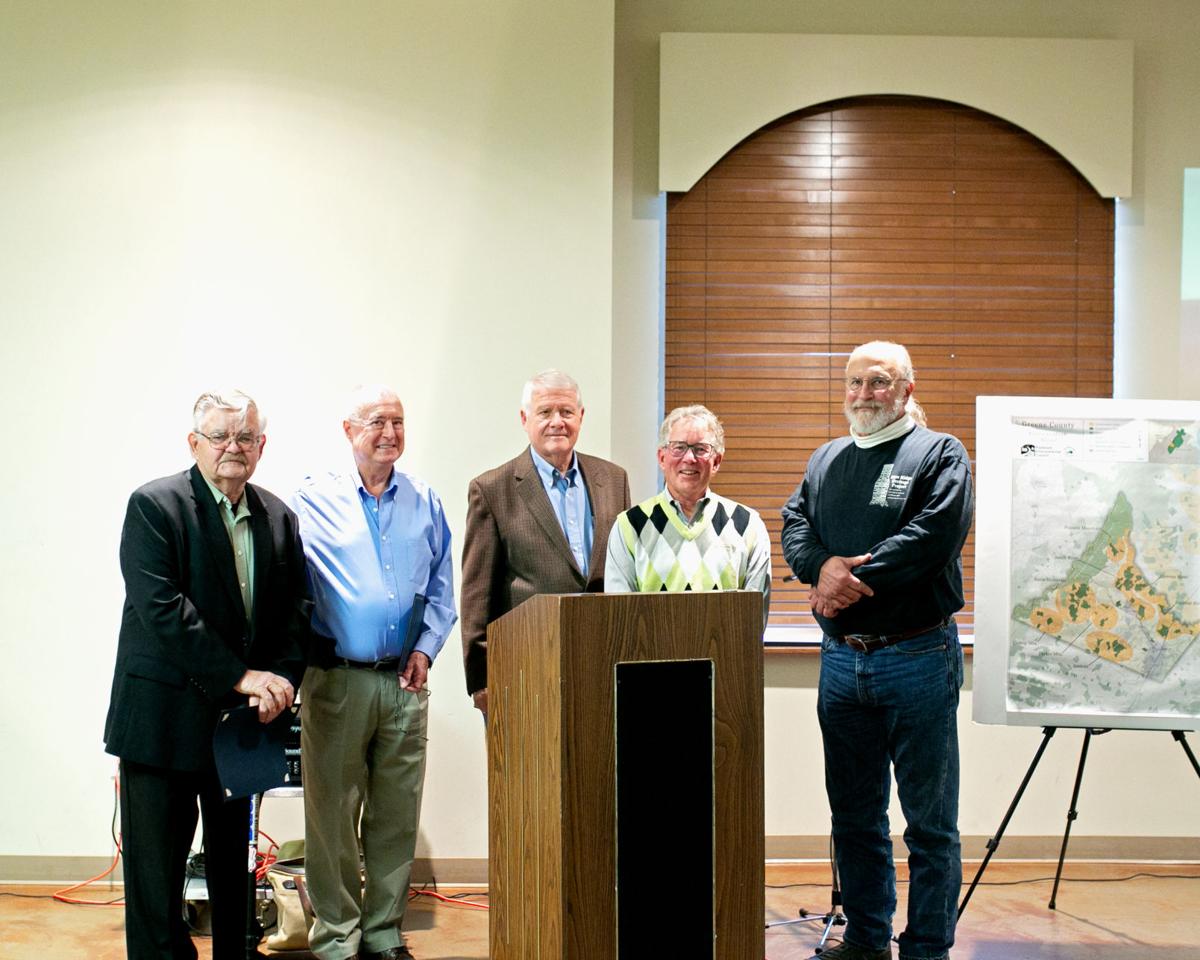 Leaders in the Blue Ridge Heritage Project were honored Sunday night by the Blue Ridge Foothills Conservancy for their “conservation of our history,” said conservancy president Carl Schmitt, center. From left to right: Jim Lillard, who headed up the Madison County memorial committee; Norm Addington, who headed up the Greene County memorial committee; conservancy member Russell James; and Bill Henry, who came up with the idea to honor the displaced families with memorials in each of the eight counties surrounding Shenandoah National Park. 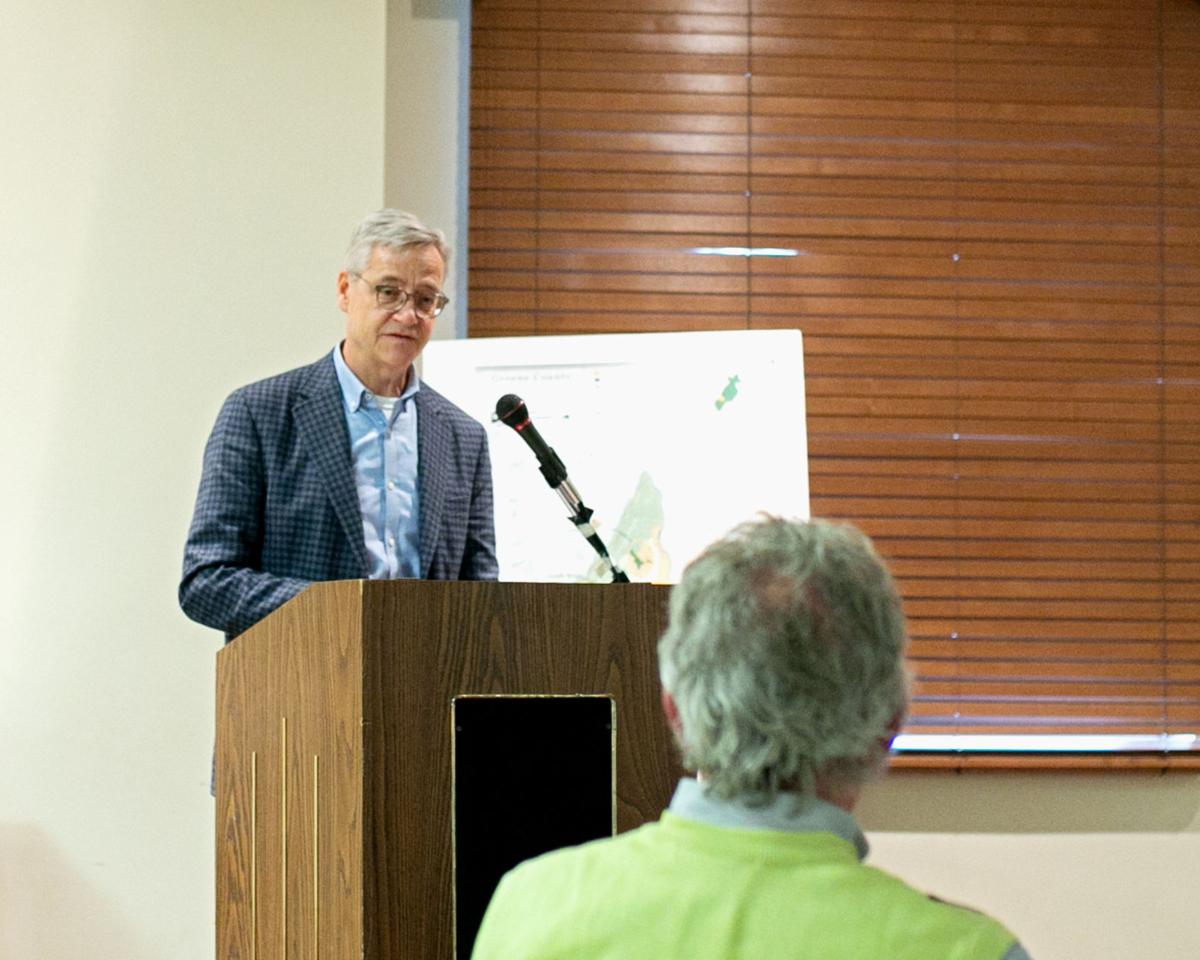 Tom Mayes, author of “Why Old Places Matter” told the conservancy there are myriad reasons people feel drawn to old buildings and places, and they need to be protected.

Leaders in the Blue Ridge Heritage Project were honored Sunday night by the Blue Ridge Foothills Conservancy for their “conservation of our history,” said conservancy president Carl Schmitt, center. From left to right: Jim Lillard, who headed up the Madison County memorial committee; Norm Addington, who headed up the Greene County memorial committee; conservancy member Russell James; and Bill Henry, who came up with the idea to honor the displaced families with memorials in each of the eight counties surrounding Shenandoah National Park.

Tom Mayes, author of “Why Old Places Matter” told the conservancy there are myriad reasons people feel drawn to old buildings and places, and they need to be protected.

The Blue Ridge Foothills Conservancy recently honored the founder of the Blue Ridge Heritage Project and the leads of the projects in Madison and Greene counties. The group also heard from a guest speaker about why old places and buildings matter.

President Carl Schmitt told the group at the annual meeting Nov. 13 that two landowners put land into conservation easements in 2019—one in Madison of 48 acres and one in Greene of 124 acres in the Conway River Conservation Area. Neither landowner was able to attend the event to be recognized.

“This is our 21st year working with other groups in the area on land conservation,” Schmitt said. “In fact, we have gone from 1,181 acres held by six landowners to 16,411 acres in Madison County. In Greene, we’ve gone from just 374 acres held by three landowners to 10,667 acres held by 61 landowners. So we, along with colleagues, feel like we’ve made some real progress but there’s a lot more to be done if we really want to keep this rural community as it is, at least in most of these areas.”

“Both are major, major deals,” Schmitt said. “We didn’t have anything to do with that because it’s outside of Greene and Madison (counties), but this really expands the protection of those two valued properties.”

Schmitt also noted the Greene County Board of Supervisors’ approval to designate Va. Route 810 (Dyke Road) as a scenic byway.

“It’s a first for our board to recognize the value of scenic property,” he said.

The group recognized the Blue Ridge Heritage Project with a conservation award, as well.

“You might say, well, that’s not conservation. I think yes, it is. It’s conservation of history and a very important part of our history,” Schmitt said.

The Blue Ridge Heritage Project, the idea of Bill Henry of Greene County, was founded to memorialize the families displaced from the Blue Ridge Mountains when Shenandoah National Park was established in the 1930s. The park was formed from parts of eight counties: Albemarle, Augusta, Greene, Madison, Page, Rappahannock, Rockingham and Warren.

“Tonight, we’re very proud to honor a group of citizens that took it upon themselves to create memorials in the eight counties surrounding the park,” Russell James said. “Henry decided early on the best way to honor those families was to create a monument on each site and telling their story. And during the process it was decided that a stone chimney would be the centerpiece of each memorial, symbolizing all that remained in the park after the families were displaced.”

The first chimney and monument erected was in Madison County. Today, all the counties have monuments except Augusta County, which has formed a committee.

Madison’s monument, spearheaded by Jim Lillard, is at the former Criglersville Elementary School.

“My mother was 14 years old when she had to leave the park,” said Lillard, whose mother Margaret Ruth Woodward Lillard was born in park territory in 1918.

Greene County’s memorial is in the Town of Stanardsville next to the county administration building. The Greene County committee was headed up by Norm Addington.

“First, thank you very much,” Addington said. “I had a great team and two of the members of my team are here tonight: Jeanne Rexroad and Joann Powell. I just happen to be the leader of the band. We had a great team. Thank you.”

Henry admitted he had no idea what he was doing once he mentioned the idea publicly for the first time in 2012.

“People were like, just coming out of the woodwork and stepping up and asking to help. They just wanted to be a part of it,” he said. “I had the idea, but the rest of it is due to the fact that there have been so many people who thought this was a good idea and brought their skills and brought their energy to the project.”

He said the group in Augusta hopes to have the memorial complete by middle of next year.

Tom Mayes, author of “Why Old Places Matter: How historic places affect our identity and well-being” said he was moved by the award given that night as continuity is one of the reasons old places matter.

“Continuity brings a psychological balance that is important for mental health. Perhaps where we see this idea of continuity the most is when the continuity between people and place is broken,” said Mayes, who is also general counsel for the National Trust. “I walked up to the memorial this evening and I’m so deeply grateful that the painful break between the people and the old places of their lives in their communities is now being honored and recognized.”

Another reason old places matter is the sense of community, he said.

“Go to the website for any visitor center or chamber of commerce and they show you its identify through historic buildings or historic downtowns, places that are part of what make the community what it is,” he said. “They are also places where people walk and gather.”

He said sprawl has been blamed for destroying communities and he applauds builders who are trying to create walkable neighborhoods so people can gather.

“But there’s something critically important to this and that’s the notion of time. You cannot build a new community,” Mayes said. “I firmly believe that old places are infinitely important to people and help us fulfill something. They give us a sense of who we actually are as people. They’re part of our identity, they embed our memories, and they inspire us with beauty. But, at the same time there is this incredibly practical benefit of fostering community.