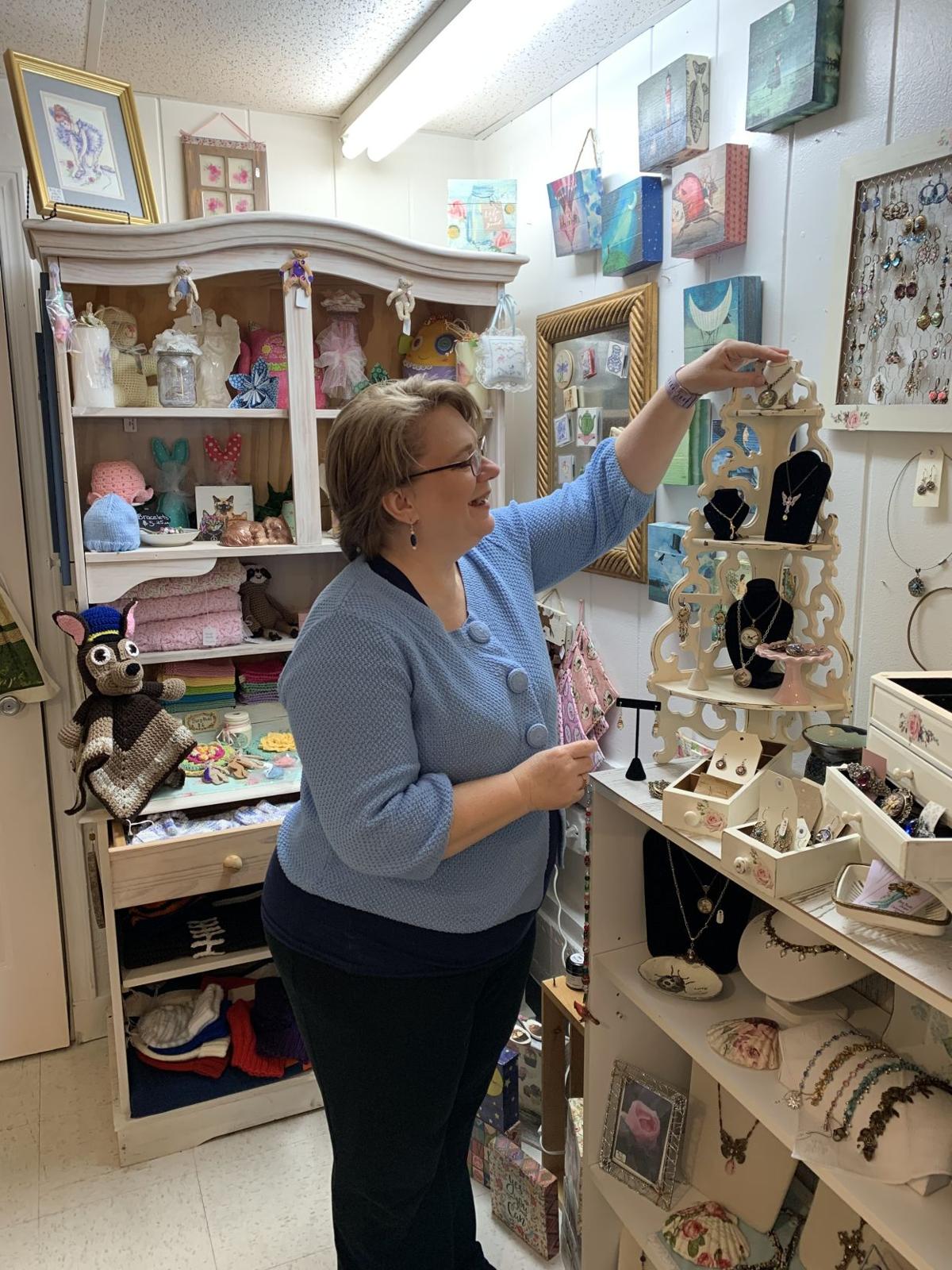 Danielle Oakes works on a jewelry display at her shop Qute Scraps in Ruckersville. 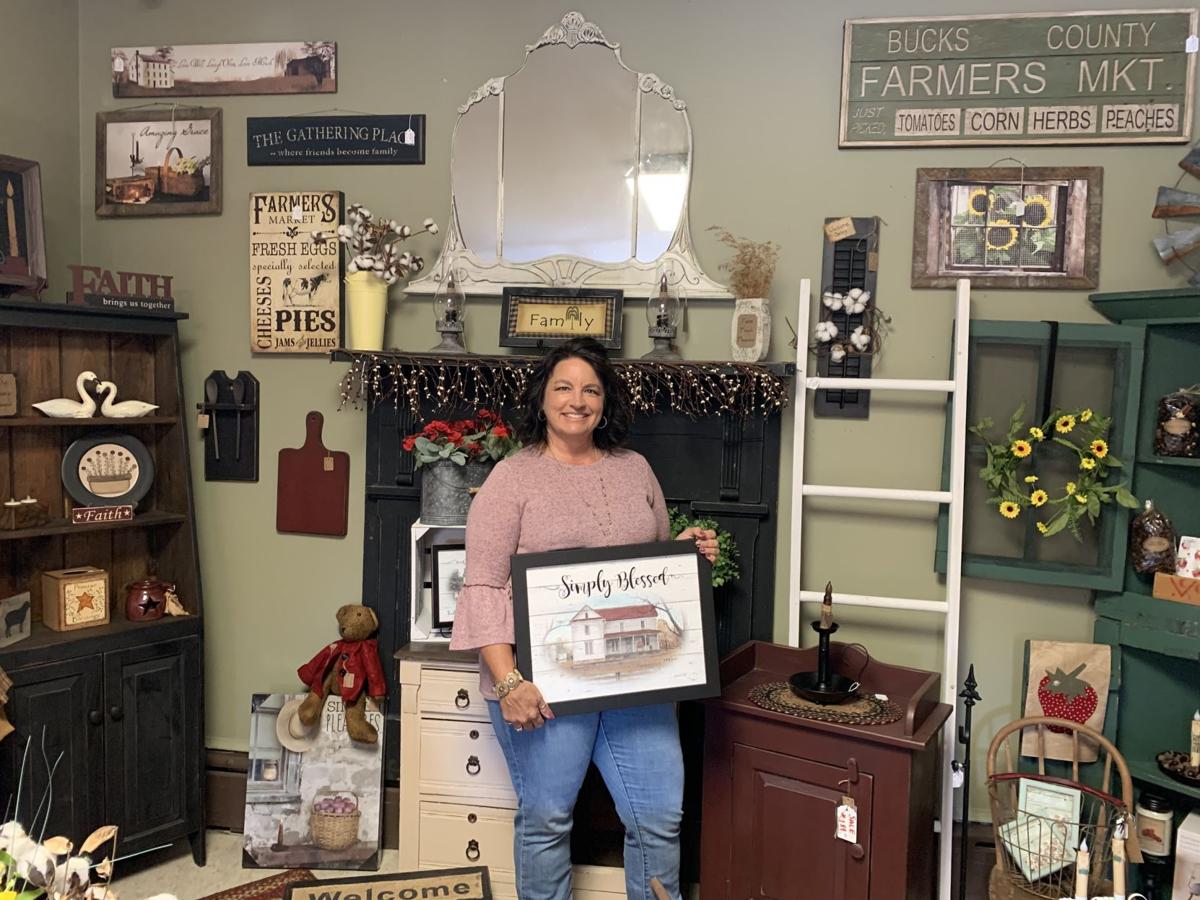 Amy Deane showcases some of the items in a booth in her shop The Wooly Lam.

Danielle Oakes works on a jewelry display at her shop Qute Scraps in Ruckersville.

Amy Deane showcases some of the items in a booth in her shop The Wooly Lam.

Sometimes you have to pivot to survive. That’s how three small businesses in Greene have been able to stay afloat during the coronavirus pandemic.

The Wooly Lam, Qute Scraps and The Country Store Antique Mall—all in Ruckersville—have started holding Facebook Live events to showcase items in their inventory for sale.

Amy Deane, owner of The Wooly Lam on U.S. Route 29 north, said there was a learning curve, but she plans to continue the Facebook Lives even after the governor opens businesses again.

“Going to Facebook Live has been very beneficial for us,” Deane said. “We have reached a lot of people outside of our community.”

For Chasity Hall, with The Country Store Antique Mall at the intersection of U.S. Routes 29 and 33, the drop in customers coming in was noticeable right away.

“Our store is located at the busiest intersection in the county,” Hall said. “We were used to an enormous amount of foot traffic, seven days a week. As time went on I started to think of people at home, working on their honey-do lists, trying to update their homes. So I said, you know, there has to be a way for us to still let our customers know we’re here.”

None of the businesses have a website or e-commerce ability, but that hasn’t stopped them from doing business online, on the phone and via email.

“I have people emailing me and I send them pictures,” Oakes said. “The Facebook format has been for sure what’s sustaining us.”

The Country Store Antique Mall and The Wooly Lam are both large-scale shops with numerous vendors’ booths throughout.

“Sometimes it’s a one-of-a-kind item that people are looking for,” Hall said. “They’re messaging us asking if we have the something and because of the variety of vendors, we’re able to find the item. Or, if our vendors don’t have it, they know how to get it for them.”

Both Deane and Oakes said they’re not sure if an e-commerce presence is going to help their businesses because much of what they have are one-of-a-kind items.

“When somebody buys the item, it’s put in their car and drives away,” Deane said. “I don’t have multiples of items.”

Oakes said the only reason she’d be interested in having such an online presence is to reach people who are not on Facebook.

All three agreed that people have responded to the online sales well.

“People are at home and not going out, but they still need greeting cards and birthday gifts and maybe something for themselves,” said Oakes, whose shop features more than 55 local and regional artists’ creations. “I had a man come in the other day who said he was going to buy soap online but decided to support us instead. And that really meant a lot. He said ‘Let’s keep the green in Greene’.”

Deane said she’s heard so many good comments about her shop during the Facebook Live events.

“We’ve reached people outside our little area,” she said. “We’ve had people who have bought online and travel here to pick it up and say this is one of their new favorite spots. I think having these Facebook Lives has helped establish a personal relationship with our customers and I think that’s something that’s very lacking in your big-box stores.”

Hall said the majority of their customer base is actually from outside the county.

“I wonder how many locals have never been to our store,” she said. “The first thing I did was invite people to like our Facebook page and started to do (the sales) once a week.”

No one could have predicted a global pandemic, but the businesswomen all agree they believe more could have been done earlier to help small local businesses.

“There are some things you don’t know until the issue arises,” Hall said. “So, unfortunately (the pandemic) has been a very costly learning process. I think most businesses will have new policies and procedures for events like this. You know, we’ve been so focused on the workplace shooter, for instance, or school shooter, nobody thought about a health pandemic.”

Deane said she believes the Greene County Economic Development Authority (EDA) or the county could have done more, sooner.

The EDA voted last week to support the Greene County Economic Development and Tourism Office and Greene County Chamber of Commerce partnership to help businesses create an e-commerce platform, among other initiatives. The all-volunteer EDA decided it didn’t have the staff necessary to offer microloans to businesses.

Oakes said she is still in reactive mode from the crisis, but does think more could have been done for the businesses.

“I wish something would have started sooner,” she said. “Sometimes when you’re a small business like this—which is more of a microbusiness—you feel left out. That’s why I really felt like I had to jump on the ball and just be determined that when this is all said and done the shop would still be here.”

Deane said she hopes the online events will translate into foot traffic once people feel comfortable coming out again. The Wooly Lam, at 9433 Seminole Trail, is open at this time from 10 a.m. to 5 p.m. Monday, Wednesday, Thursday and Friday and 10 a.m. to 6 p.m. on Saturday and Sunday. She said they will follow social-distancing guidelines. Visit @thewoolylam to find them on Facebook. Contact thewoolylam@gmail.com or call (434) 990-6000.

Oakes said she expects to open gradually, but will announce that on her Facebook page @qutescraps. The shop is at 14965 Spotswood Trail. Contact Qute Scraps via email at qutescraps@gmail.com or via phone at (434) 825-1066.

Hall said vendors at The Country Store Antique Mall is brainstorming how to reopen to the public. It may only be open on weekends at first, but they will announce that on the Facebook page