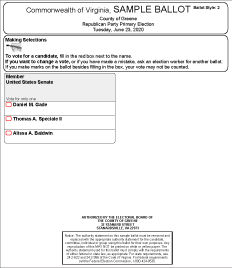 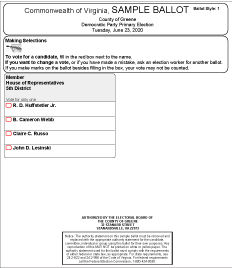 Amid the COVID-19 emergency it’s easy to forget we’re in the middle of an election year. Joe Biden won Virginia in March to become the Democratic presidential candidate, facing President Donald Trump in November. But voters are not done yet.

There will be two primary elections in Virginia on Tuesday, June 23—one for the Democratic nomination for the 5th District congressional seat, currently held by Denver Riggleman, and a Republican primary for the U.S. Senate seat, currently held by Mark Warner, who is running for re-election. Riggleman, also running for re-election, is facing challenger Bob Good for the Republican nomination, currently scheduled to be at a convention at a date to be determined.

“We have no idea what June 23 is going to look like,” Lewis-Fowler said. “The governor made the determination he was going to bump the elections two weeks down the road” and allow people to vote absentee for any reason.

“Just select ‘2A’ as the reason code,” she said. “But don’t forget to check off what election you’re voting in—Republican or Democrat—so I can send you the right ballot.”

While people can request the application up to a week prior to the election, it’s not really adequate time to get that back to her office and the ballot mailed and sent back, so Lewis-Fowler recommends requesting the application as soon as possible.

At this time the polls are all scheduled to be open that day for those who prefer to vote in person, but absentee voting allows for “fewer people in here and fewer people at the polls,” which makes it safer, she said.

Lewis-Fowler said she is looking ahead to the November presidential election, which always has a large turnout in Greene County.

“We’re thinking about it; we have to get a lot planned but right now we don’t know a lot,” she said. “We’re focusing on this election right now.”

If there is still a limit to the number of people permitted to gather, someone will need to watch at each polling location to only let in the maximum allowed by law in at a time. She said that’s what’s happening for localities holding elections on May 19. The Town of Stanardsville holds its elections in November.

Lewis-Fowler said in-office absentee voting will begin Friday, May 8 and her office hours will go back to the 8:30 a.m. to 5 p.m. Monday-Friday.

Every absentee ballot in Greene County is counted, Lewis-Fowler said.

“It might be more work on us, but it’s the preferred method right now,” she said.

Lewis-Fowler said she believes fraud in absentee voting is minimal.

“If you mail me an application form, I mail it to the address given,” she said. “You can mail it back to me or you can personally bring your voted ballot to me but you can’t bring your spouse’s or your kid’s ballot, only your own, with a photo ID.”

There is no box outside to drop ballots in, she added. To make sure Lewis-Fowler received a ballot, the voter may call her office or email her.

Anyone who will be 18 by the presidential election on Nov. 3 can register to vote now and is permitted to vote in the primary.

Lewis-Fowler can be reached by phone at (434) 985-5213 or by email at jlewis-fowler@gcva.us. The Greene County Office of Voter Registration is at 32 Stanard St. in Stanardsville.