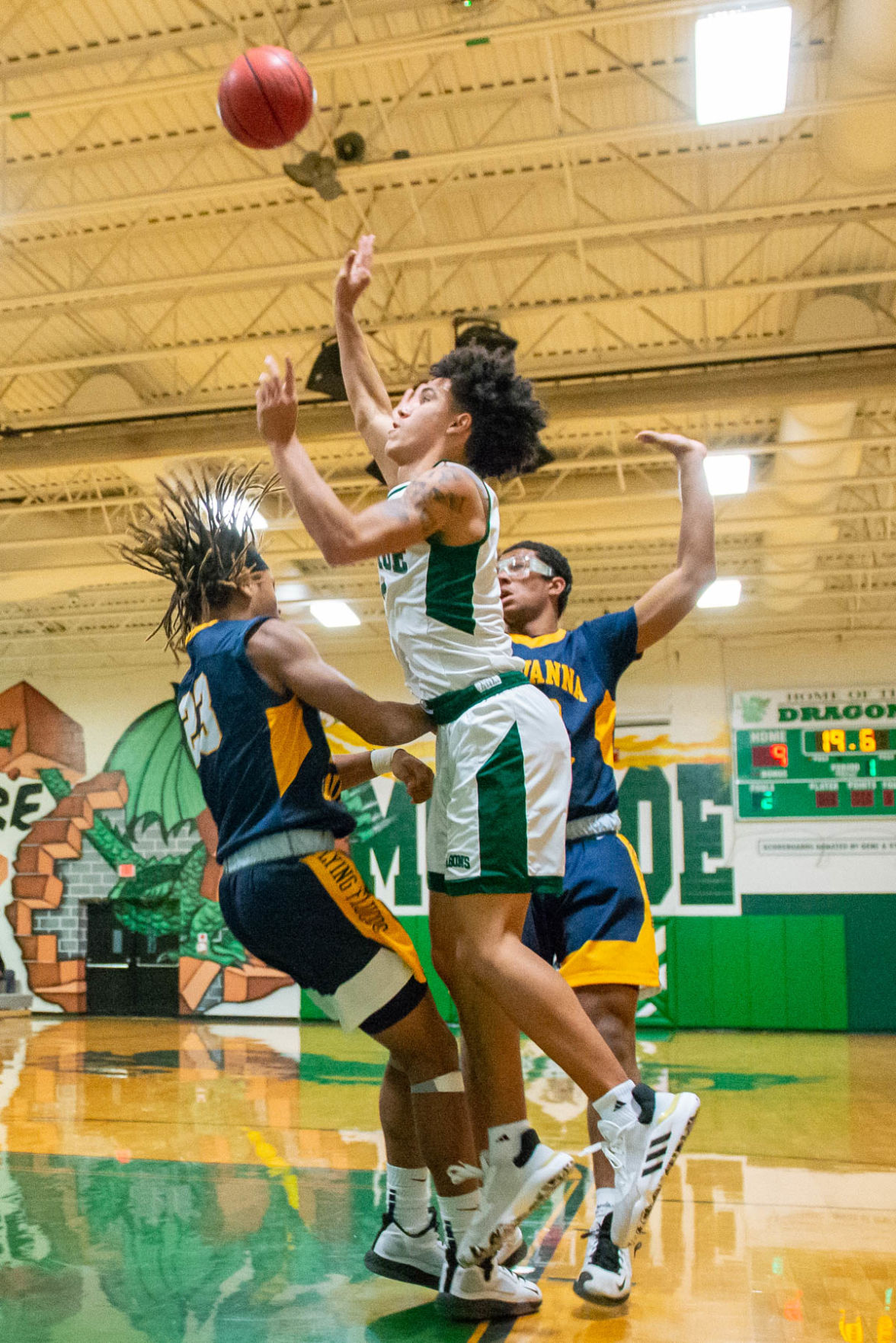 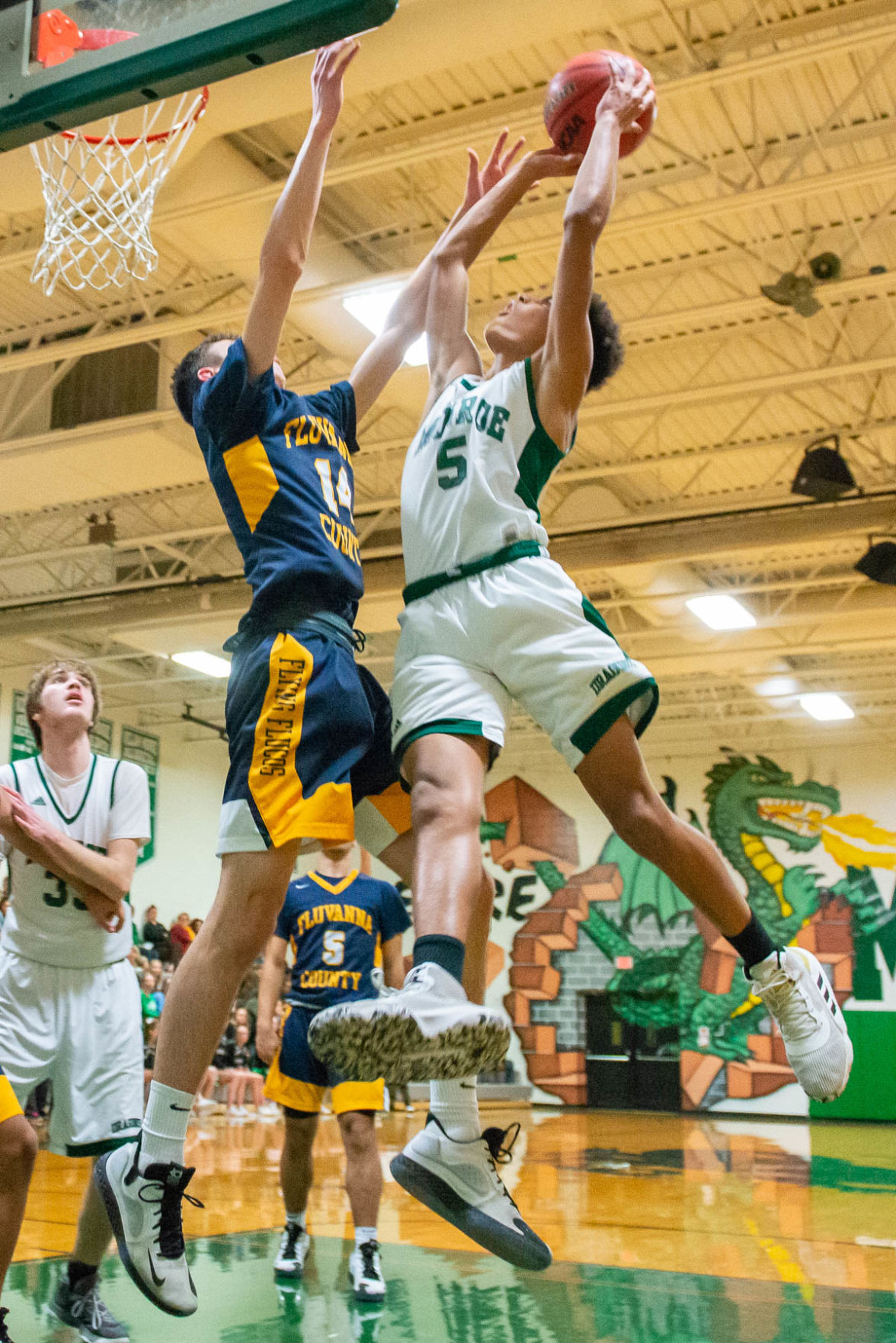 Troy Jones leaps to score two during the Dragons’ 67-48 win over the Flucos on Thursday, Jan. 23. 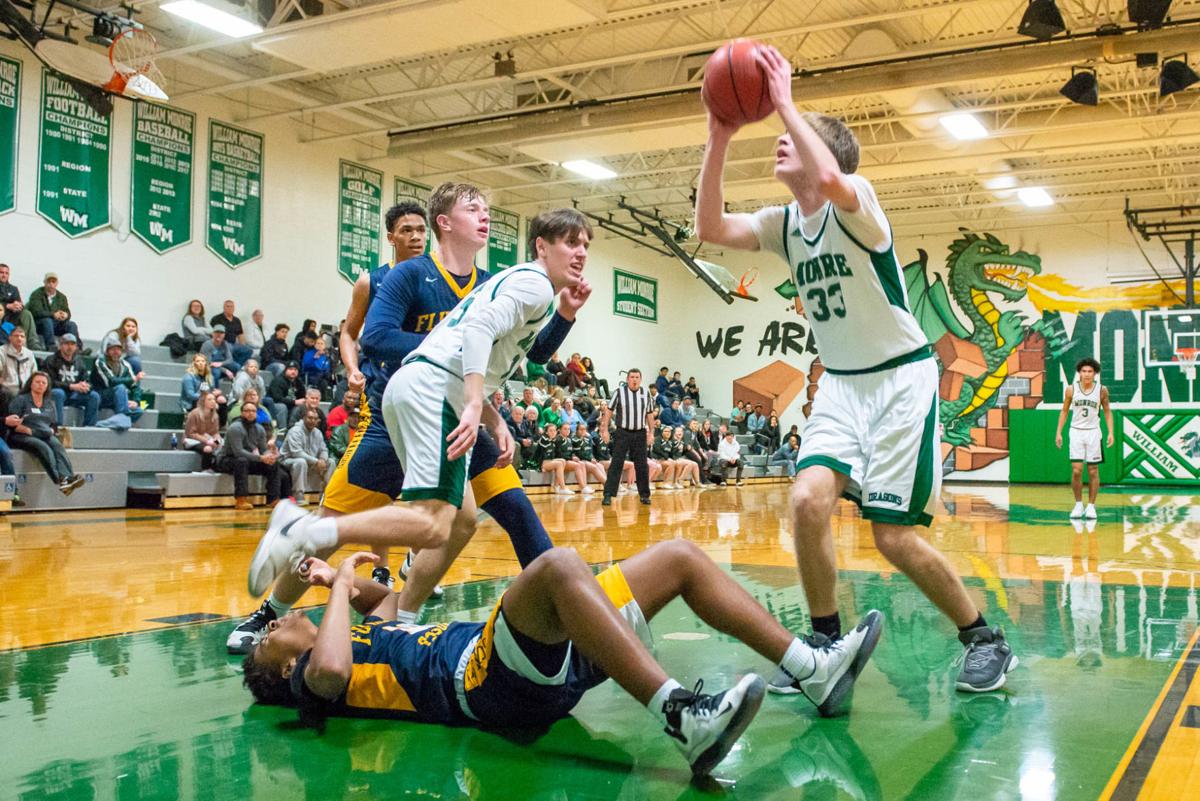 Daren Morris comes away with the ball after tense exchange.

Troy Jones leaps to score two during the Dragons’ 67-48 win over the Flucos on Thursday, Jan. 23.

Daren Morris comes away with the ball after tense exchange.

The William Monroe boys basketball team opened the season with a 1-4 record, including a 50-37 road loss to Fluvanna County.

What a difference a month makes.

The Dragons have shaken off the inauspicious start to the season to post seven wins in their past 10 games, including last week’s 67-48 victory over the Flucos in the return matchup in Stanardsville.

Tucker Shifflett scored 13 of his team-high 15 points in the second half to lead four players in double figures for William Monroe (8-7).

“I was very proud of them,” William Monroe coach Brett Maynard said. “[Fluvanna] whooped on us at the beginning of the year and I kind of challenged our team, ‘By the time we play them again, we need to be at the point where we can beat a good team like that.’ I thought our guys really responded and it just shows how hard they’ve been working for us to be able to come and play as a complete team. I think [Fluvanna] has a lot of talent and they’re a good team. I was very proud of our guys.

Fluvanna County (5-8) set the tone early on thanks to some strong perimeter shooting. John Rittenhouse tallied five points as the Flucos built an 8-4 advantage with 1:59 left in the first quarter.

After making just one field goal in the first six minutes, Max Kinsey drained a 3-pointer from the corner and Logan Barbour added four points as William Monroe established an 11-8 lead after one quarter.

Fluvanna rallied in the second quarter as Isaac Rivera scored five points to open the quarter and the Flucos regained the lead, 16-14 with 5:01 left in the half. The advantage would be short-lived as Darren Morris scored a pair of buckets and Troy Jones closed the period with eight points as Monroe took a 31-28 lead into intermission.

After watching a six-point lead get sliced in half late in the second quarter, Maynard made some adjustments during the halftime break.

“I challenged our guys at halftime to contain defensively and stop trying to block shots and just chest up, especially on Kobe [Edmonds’] penetration and just be more continuous,” Maynard said. “They were getting a lot of loose balls, kick-outs for 3’s or offensive rebounds and then they’d hit a 3, so we were more continuous and more sound and I thought we responded well.”

The Greene Dragons opened the third quarter with a 12-2 run to build a commanding 43-30 lead. All five starters scored during the run, including a trey from Shifflett.

“I was very proud of the passing that we made and the huge improvement of taking care of the basketball since the beginning of the year,” Maynard said.

Fluvanna County wouldn’t go away quietly and began chipping away at the lead. Rivera connected on a 3-pointer from the right wing and then found Daniel Campbell for an open layup off a pick-and-roll to trim the lead to 45-40.

William Monroe led 48-41 after three and continued to push the tempo. The Dragons built a 56-41 lead early in the fourth before Edmonds capped a quick 6-0 Fluvanna run with a layup to close the deficit to 56-47 with 4:24 left to play.

That would be as close as the Flucos would get as the Dragons closed the game on a 9-1 run to seal the win.

Rivera paced Fluvanna County with 15 points. Edmonds chipped in 13 points and Rittenhouse finished with 11 in the loss.

In addition to Shifflett’s 15 points, Barbour, who missed the first matchup between the teams, tallied 14 points, while Troy Jones and Frank Lindsay chipped in 12 points apiece in the win.

Maynard was pleased with the scoring depth his team showed Thursday, Jan. 23.

“We have probably four or five guys that could lead us in scoring on any given night,” he said. “Obviously, Logan has been a scorer for us the last three years and he’s one of them, but our other guys can really step up and score and that’s nice to have. We’re not so set in stone and we have some flexibility there and some more options.”