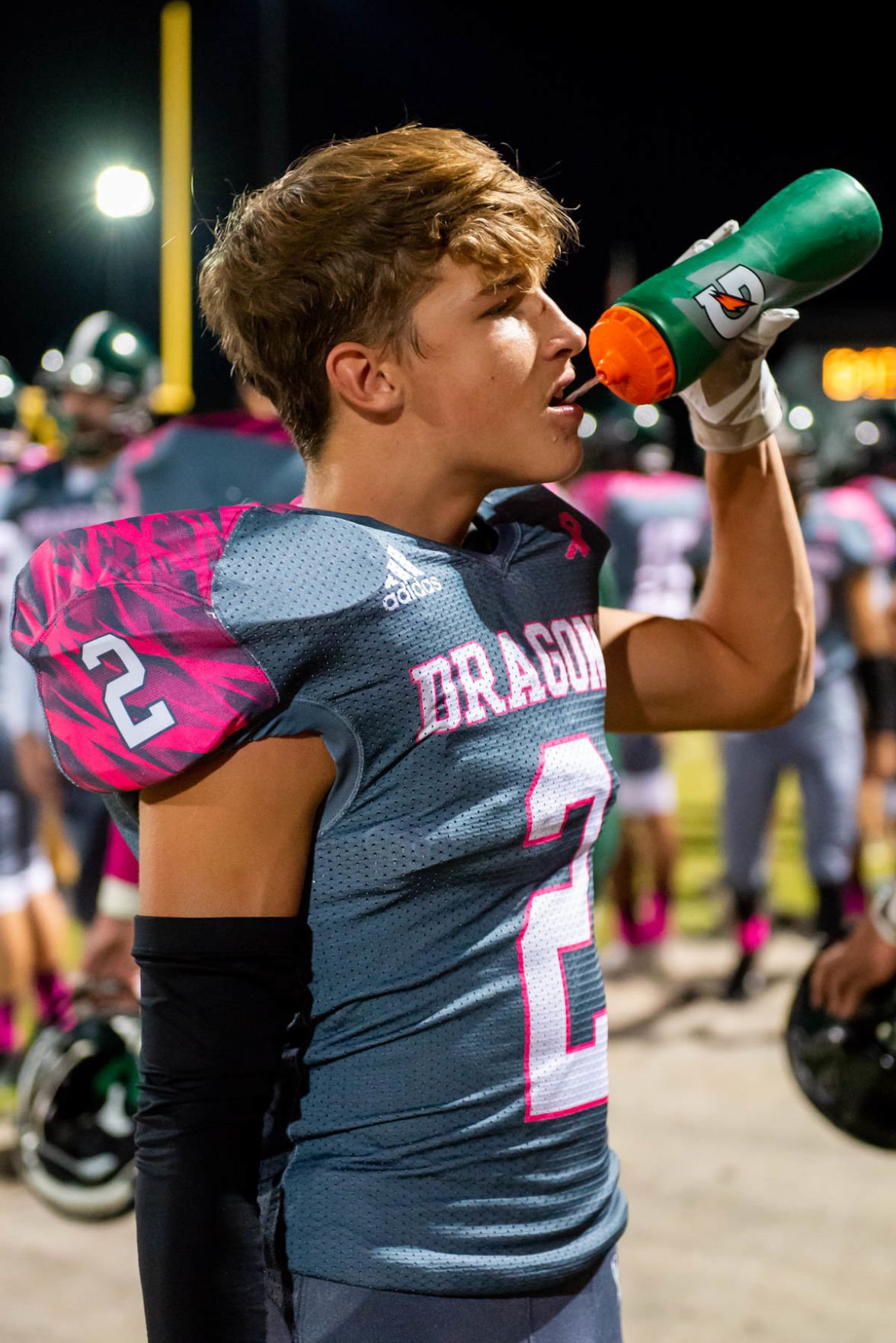 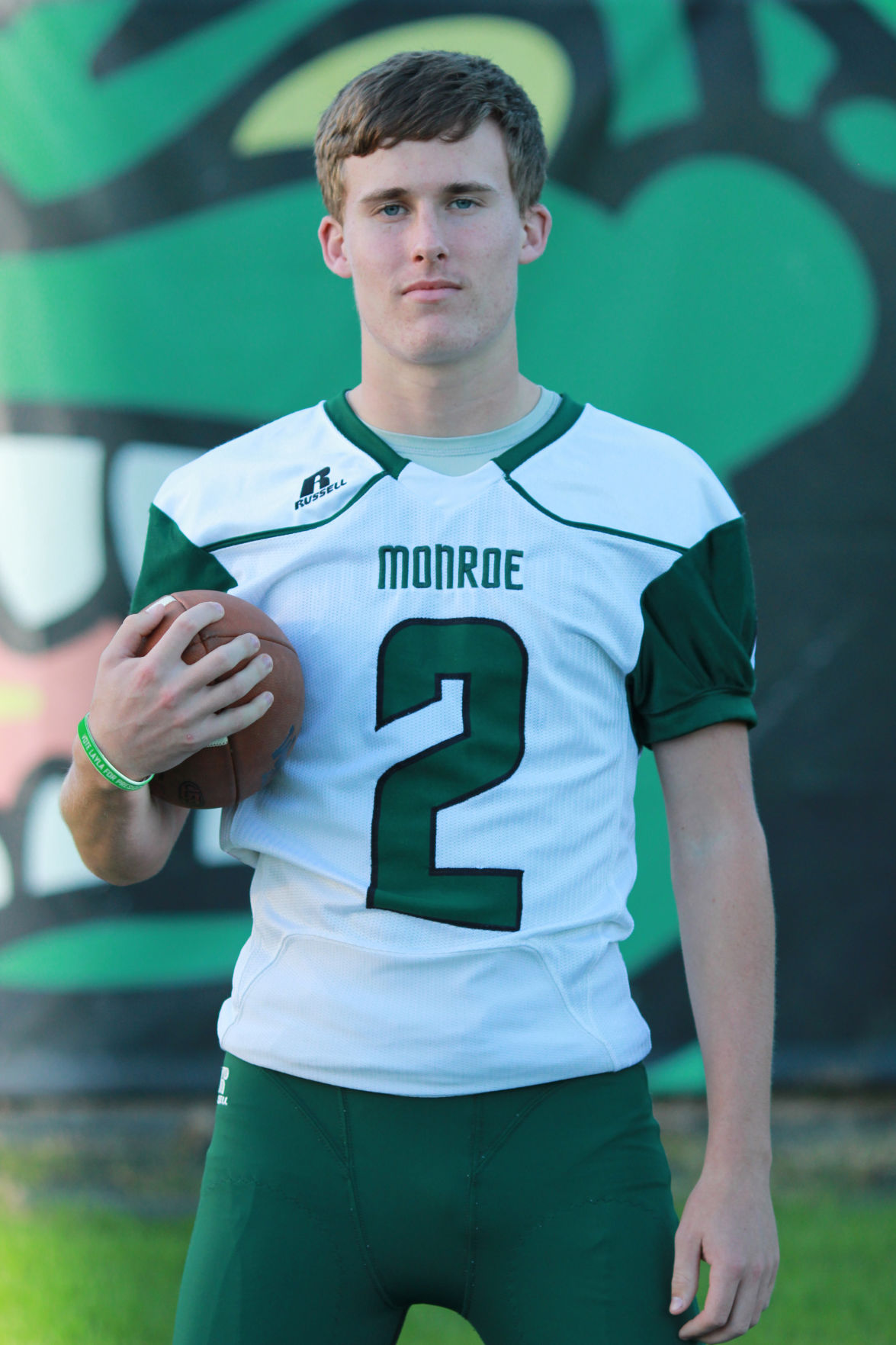 Craig Jeffers poses for his senior banner in 2015.

Craig Jeffers poses for his senior banner in 2015.

Sophomore Shea Jeffers brings his late brother on the football field every time he plays for the Dragons while wearing the number 2 jersey. Craig Jeffers wore the number 2 for the last time five years ago on Mooney Field as his family and friends all cheered from the stands. No one knew then what fate would bring just seven months later.

Craig graduated from William Monroe High School on June 5, 2015, and five short days later he died tragically in a moped accident in Myrtle Beach. To say Greene County was rocked would be an understatement—and nothing to what his parents and siblings felt—as dozens gathered around the football field for a candlelight vigil on June 13, 2015.

Craig left behind two brothers, Shea and Liam, and his parents, Maureen and Sam.

Shea was 11 years old when Craig, 18, died and the pair was extraordinarily.

The Class of 2015 was the first year Jon Rocha wore the head coach mantle for William Monroe High School.

“That was a very special class; they were truly that band of brothers,” Rocha said. “They loved football and they just loved each other. And they were very successful because of that brotherhood they had.”

A favorite memory from the year so far is beating Madison County High School, Shea said.

“But he holds his own,” Rocha said. “He ran a reverse the other week against Madison. He’s only going to get better. It’s not just being on varsity, he’s contributing.”

Craig was a corner and Shea plays wide receiver, so Rocha said Shea is contributing in a different way than his brother did.

Sam Jeffers said he was a little nervous about Shea playing varsity this year.

“I was worried for him playing varsity this year because he was kind of on the cusp of it, but he showed me and I’m sure he’s show coach, too, that varsity is where he belongs and he’s got a lot to learn, but good things are going to happen.”

“What I love about football and what football players love about football is that it’s a bit of an escape from everything else,” Sam Jeffers said. “You’re just there with your team to play football. That’s the experience he’s having and I’m very happy to see the team really come together.”

“My teammates are really cool; we all get along,” he said. “That’s the best part.”

This is the first year Shea is playing for varsity, but he’s worn the number 2 in youth football and for William Monroe’s junior varsity team, in honor of Craig.

“It’s really cool to wear number 2,” Shea said. “It sort of makes me feel like he’s with me when I’m out there.”

Craig was buried in his green home number 2 jersey and his white away jersey was framed and hangs in Shea’s room.

Rocha said an athlete’s number is important to them, and after Craig’s death he retired the number 2 “unless and until” Shea wanted to wear it.

“There shouldn’t be any other way than for Shea to wear it and it would not be any other way,” Rocha said. “It’ll be difficult because eventually, you know, when Shea’s graduated the number is back in rotation. For Monroe, though, the number 2 will always mean Jeffers.”

Shea thinks about his brother all the time, but said wearing that number is an honor for him.

“It’s like I’m bringing him on the field with me,” Shea said.

The Jeffers and Rocha all agree the class of 2015 was a special set of teammates.

“The fact that Craig’s friends have kept up with Shea, that’s a big thing for me,” she said.

They’ve been supportive of his wearing the number 2, as well, she noted

“The team that Craig was on, they were together when they got here,” Rocha said.

Sam Jeffers said he feels like the current Dragons’ varsity team mirrors Craig’s in a lot of ways.

Rocha said Shea’s team has the potential to become that close, as well.

“There’s a huge number that return next year; the whole [offensive] line returns,” Rocha said. “And when you return with that, with those moments, with that family, it’s huge.”

Maureen Jeffers said she sees the connections between this team and Shea and how similar they are to what Craig experienced with his teammates.

“This has kind of been, for Shea, the team-type moment that he’s been waiting for. That’s been a big thing for him ... for us, you know, part of bringing Craig back that I like is that a lot of Craig’s friends follow Shea on social media and stuff like that.”

Rocha said he still thinks of those boys like his own.

“They’re yours for life,” he said. “Just like for Coach [Martin] Mooney, I’m his. That’s something that is lost when you lose one like Craig. All of us coaches here, sometimes it just hits us, our kids are our kids, our players are our players and when they need something, they’re your kids no matter what. When you lose one, it’s a piece of family you’ve lost.”

Rocha said he’s not one to wear his religion on his sleeve, but he does think he was in the right place at the right time, even if it was hard.

Rocha said he remembers being there, talking to Craig’s friends and teammates after his death and being on the track for the memorial.

“It’s one of the worst things I’ve ever experienced in my life,” he said.

Rocha lost his own brother when they were in high school; he was a sophomore and his brother, a senior.

“I think God works in mysterious ways. I lost my brother. And so I know, God I know, the pain. And I sometimes I think, you know, you’re put in places because of who you are,” he said. “I feel for him, but the silver lining is my sister and I are super tight and as [Liam] and Shea go through life, they’ll realize that because that’s what they have.”

Rocha added, “I just knew what he was going through. I just do, and there is no other pain like it. I never really understood how my parents felt until I had a child. But I don’t think parents will understand what it’s like to lose a brother, either. And him, me, my sister and Liam know.”

Shea said it’s been difficult continuing in football and now through high school and Dragons’ football while not having his oldest brother to talk to.

“It’s just coming home and he’s not there,” he said.

“Yeah, I would say when it comes to Shea and football [the hardest thing for me] is not being able to tell Craig things about Shea,” Maureen Jeffers said. “You know how many times I’d like to say, ‘Did you see that?’ Or, you know, I feel like I want to text him or I feel like I want to, you know, be able to talk to him about how great Shea’s is doing. And we don’t get that. And I know, there are times that Shea would like to be able to share some stuff with his older brother.”

Maureen Jeffers added that she was nervous the first game of the season, too, seeing the number 2 on the field again, but it’s been really great.

“Since I don’t get to share moments like this with Craig anymore, it is special for me to see Shea out there on the field, especially this year as a Dragon,” she said.

Rocha agreed. He said sometimes, because of the physical similarities between Shea and Craig, he has to do a double take on the sidelines and sometimes that is a little hard.