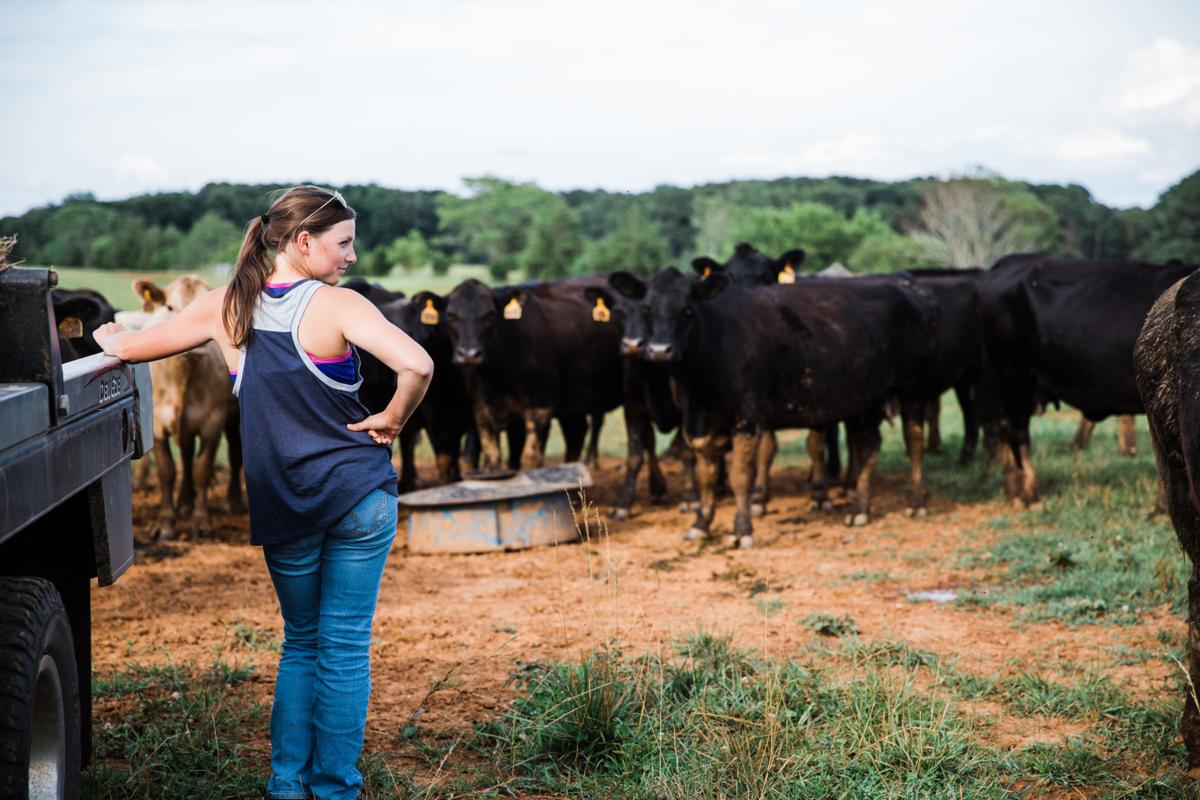 Elizabeth Nixon, 25, grew up on her family’s Orange County farm and returned after graduating from Oklahoma State University. In addition to taking care of the books, Nixon manages the farm’s 900-head cattle herd. 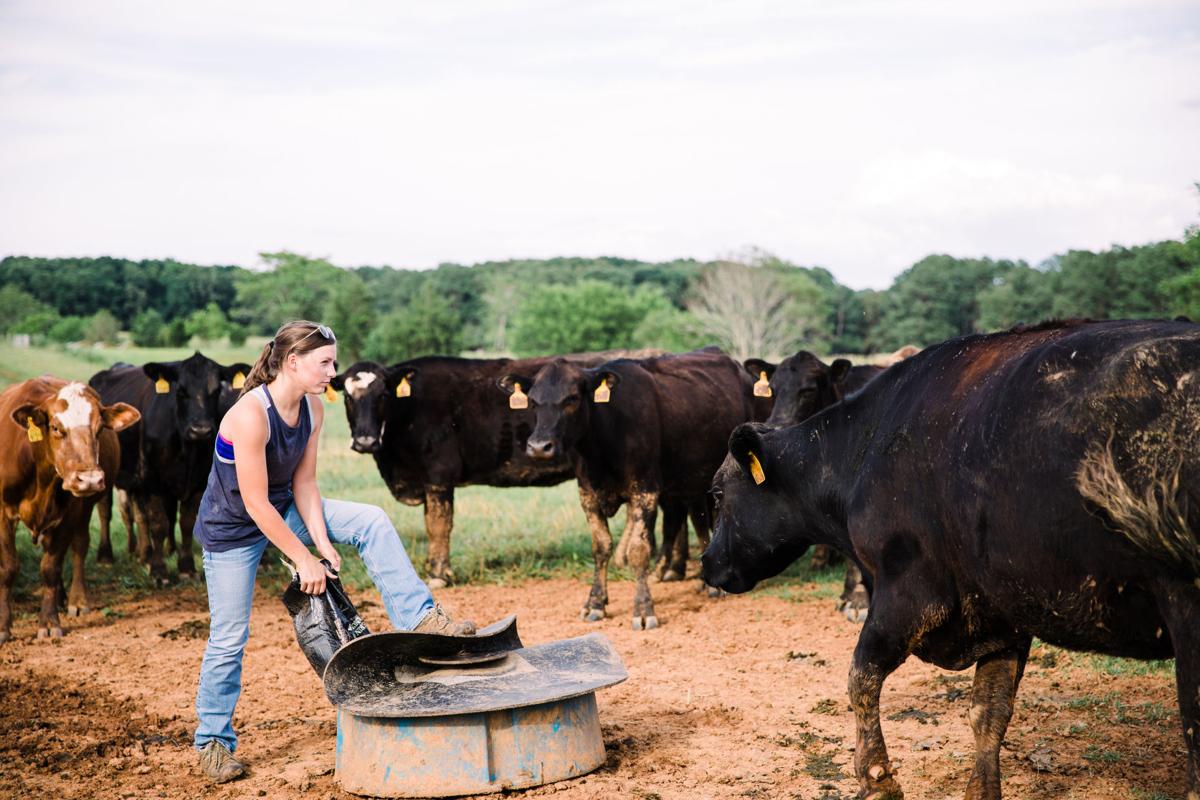 COURTESY ELIZABETH NIXONElizabeth Nixon, 25, grew up on her family’s Orange County farm and returned after graduating from Oklahoma State University. In addition to taking care of the books, Nixon manages the farm’s 900-head cattle herd.

Elizabeth Nixon, 25, grew up on her family’s Orange County farm and returned after graduating from Oklahoma State University. In addition to taking care of the books, Nixon manages the farm’s 900-head cattle herd.

COURTESY ELIZABETH NIXONElizabeth Nixon, 25, grew up on her family’s Orange County farm and returned after graduating from Oklahoma State University. In addition to taking care of the books, Nixon manages the farm’s 900-head cattle herd.

Nearly 40% of the 6,000-plus Central Virginia farmers out standing in their fields are women, a trend that U.S. Department of Agriculture officials say is in keeping with the rest of the country.

The figures come from a 2017 federal census of farms that showed 39% of people involved in growing crops, tending livestock or poultry and creating farm-based agricultural products in the region are women.

About 17% of those women are the primary farm operator, meaning they do the books and the majority of the work, according to the Virginia Department of Agriculture and Consumer Services.

The recently released findings from the 2017 farm census showed that nationally, 36% of American farmers and ranchers are women, and 56% of all U.S. farming operations have at least one female decision-maker.

“It’s important to realize women have always played major, important roles in farming operations,” said Whitney Perkins, a commodities specialist for the Virginia Farm Bureau Federation who works on her family’s Louisa County beef and hay farm. “… with the addition of a question on the census, we were able to put that into a statistic and capture that for the first time.”

Women’s importance in American farming is clear in the statistics. According to the census, the number of men in the farm/agricultural production business decreased across the nation by 1.7% between 2012 and 2017. Meanwhile, the number of women working farms rose 27%.

Elizabeth Nixon, 25, returned from college to work on her family’s farm in Orange County. The operation is one of Orange’s larger farms, with 900 cattle, 5,000 acres of crops and a turkey-raising operation.

Nixon attended college in Kansas and at Oklahoma State University, where she majored in animal science and agricultural communications. She graduated in 2016 and returned home to take over the cattle side of the farm, from raising calves to culling cows.

“All of that falls on me. I oversee the cow work that’s being done, I make the budgeting decisions and help with the business decisions,” she said. “We’re a diversified family operation, and one of the reasons we’ve had the success we’ve had is that we have so many irons in the fire and family members all are involved.”

Nixon works the farm with her brother Robert, who operates the crop side of the business. Her parents also work the farm, but are slowly stepping away as the kids take over.

Nixon said that being a young woman in the cattle business can have its frustrating moments.

“There are occasions when it seems that someone won’t give me the time of day or is looking down at me because I’m this young woman who is petite rather than looking at my skill set,” she said. “But once people see what I’m capable of, that changes. I think it’s possible to prove yourself in this industry because people are more concerned with what you can do.”

Nixon said women have been in the agricultural business for decades, not just behind the books but in the barns.

“I can’t speak to what it was 10 years ago and certainly not to how it was 30 years ago because I wasn’t around. But there are a lot of women who have worked hard and paved the way for us younger women to be successful,” she said. “I think [women] have just as good an opportunity of being successful as any guy in this industry.”

Joanne Burkholder, who has served for 11 years as president of the Greene County Farm Bureau and for decades as a farm producer on her family farm, agrees.

“We don’t just do books anymore. Women are involved in every part of farming,” she said.

According to the federal farm census figures, the number of women who are principal operators of a farm has jumped 70% in the past five years across the country. In Virginia, the jump is 45%.

In Central Virginia, Albemarle County leads the region, with 1,558 farmers running 918 farm operations, including small farms, vineyards, orchards, cattle farms and other agricultural-related businesses. Of those operations, 40% are run by women.

They head 37% of Louisa County farms, 36% of Madison County operations, 38% of operations in Nelson County and 39% in Orange County.

In Virginia, farms where women are principal producers tend to be fewer than 50 acres, according to the census.

“With the increase in the local food movement, we’ve seen a lot of women enter agriculture or enter production agriculture specifically,” he said.

Perkins said small farms of one to nine acres and large farms of 500 acres and more seem to be the leading trends in the industry.

“What that tells us is that on one hand, folks are getting more into direct marketing of agriculture rather than selling on the commodity market with specialty crops and specialty marketing on a smaller scale,” she said.

“On the other side, we see that folks have to expand their operations in order to increase output to make it with today’s lower [profit margins] and they do that by producing on an economy of scale.”

Burkholder said running a substantial farm is a 24/7 job.

“But this day and time, women, as well as men, are not only working on the farm and helping with the day-to-day work, but many are working full-time jobs in the community, as well, so they can get health insurance for the family.”

The census bears Burkholder out. According to the figures, 40% of Virginia farm producers — anyone who works in a farming capacity — work more than 200 hours a year off the farm in other jobs while 39% work only on the farm.

Perkins said she is in the former category.

“My primary job is with the Virginia Farm Bureau,” she said. “In the current economy, a lot of farming operations need at least one person who has a job off the farm to provide that steady, predictable income to pay bills and provide insurance and benefits. A lot of farms have several producers who are also working off the farm. I know of some farmers who have full-time jobs and then go work full-time on the farm.”

Nixon is in the opposite category.

“Our bread and butter is farming. We have no outside income. We live farming and we make it work,” she said. “But we’re fortunate to be in this situation we’re in, because my parents worked very hard to build this farm to where it can sustain us. There are a lot of kids who would like to come back to family farms but they have to find jobs elsewhere because the farm cannot generate enough money.”

Perkins said there are challenges facing farmers but the future is bright.

“We have a rapidly expanding population that needs to be fed, clothed and housed, and that’s good for farming in many ways,” she said. “There’s also an increased demand for local foods and organic foods.”

Larger farms will need to become more productive to meet the larger societal goals while smaller farms will fill the local production niche, she predicted.

“There are a lot of opportunities in agriculture right now,” Perkins said.