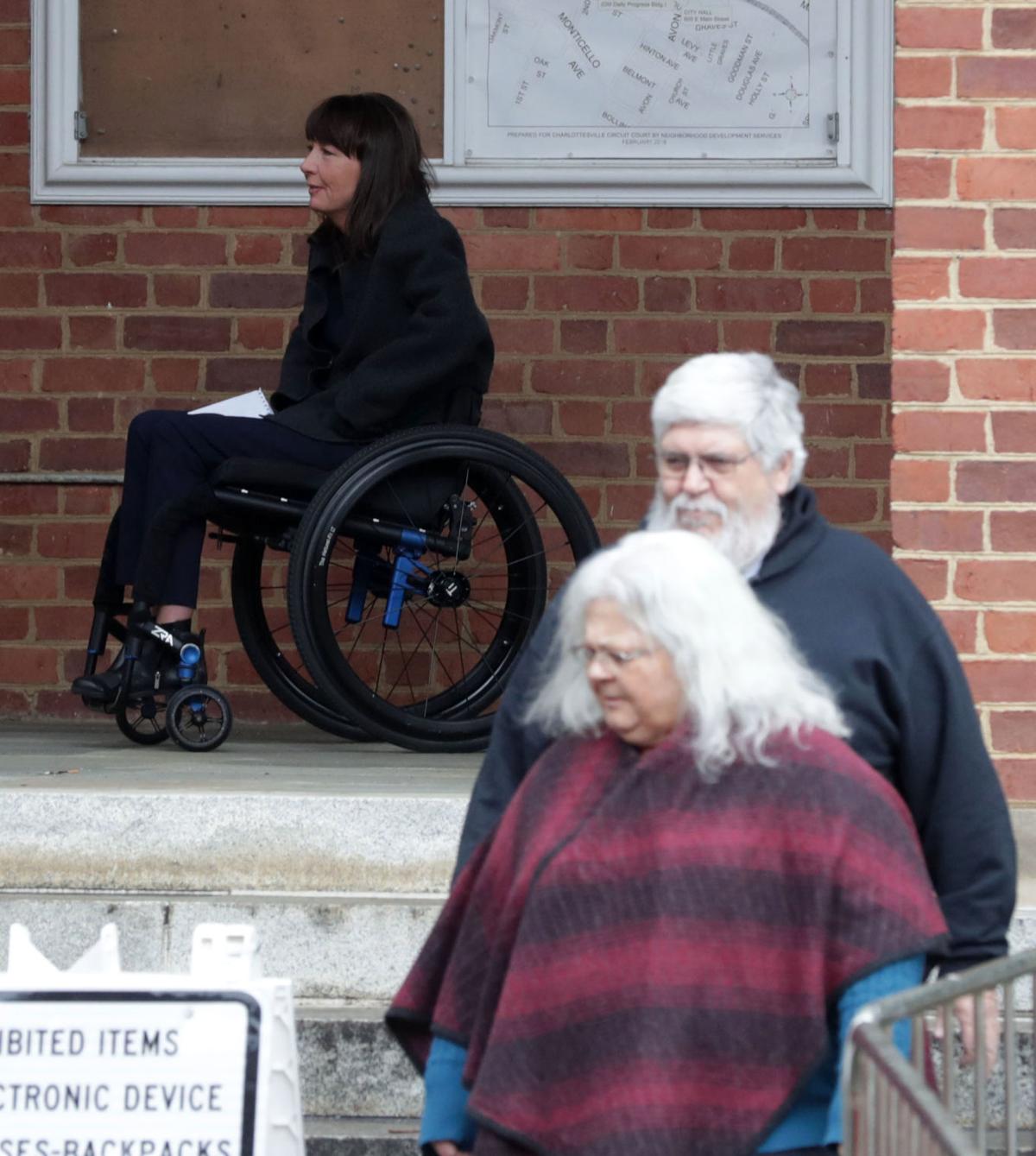 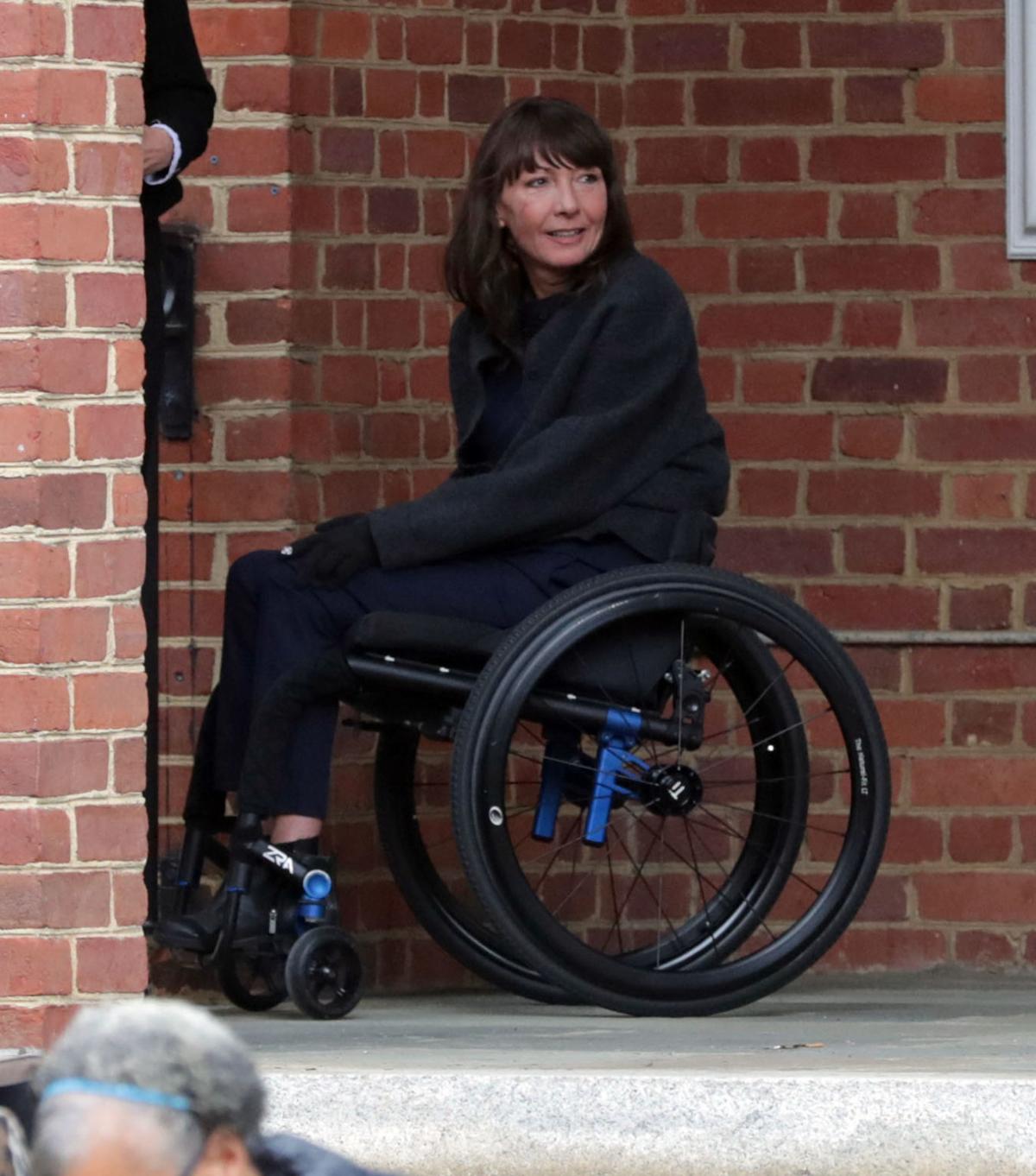 Samantha Bloom, mother of James Alex Fields, Jr., sits in her wheelchair outside of the courthouse during a break in his trial on Wednesday.

Samantha Bloom, mother of James Alex Fields, Jr., sits in her wheelchair outside of the courthouse during a break in his trial on Wednesday.

James Alex Fields Jr.’s Dodge Challenger was going about 28 mph when it rammed into a crowd of counter-protesters on Aug. 12, 2017, police said in court Wednesday.

Virginia State Trooper Clifford Thomas, a crash reconstruction expert, used aerial footage and markers around the crash site to calculate Fields’ speed. The crash killed 32-year-old Heather Heyer and injured dozens of others after the white supremacist Unite the Right rally in Charlottesville was declared an unlawful assembly.

Thomas said he calculated that Fields accelerated to a top speed of about 28 mph before decelerating to 23 mph later on Fourth Street. Based on the where Thomas placed the 23 mph marker and testimony from victims, Fields likely had already collided with counter-protesters by the point his speed dropped.

Data obtained from the Toyota Camry that Fields hit on Fourth Street showed it moved at 17.1 mph after it was struck. Thomas said it was unclear if that was the same speed Fields’ car had been going when it hit the Toyota.

Witnesses Sarah Bolstad and Hayden Calhoun said they had been with Fields before the crash, describing him as calm and tired and adding that he was not carrying any weapons or flags. Calhoun said a group of counter-protesters had yelled at their group from across the street at one point, but they did not respond.

The pair had come from Chesterfield to hear the scheduled speakers for the white supremacist rally, but they decided to head to McIntire Park, where "alt-right" leader Richard Spencer and others reorganized after the rally descended into chaos.

Bolstad and Calhoun met up with another group of ralliers to make their way to McIntire Park, but they opted to return to their car at the Jefferson School African American Heritage Center after being told the National Guard was at the park.

At that point, they met Fields and another man, identified as Josh Matthews, who said they should stick together because they could be "targets for violence."

The group stopped at the Shell gas station on Preston Avenue on the way back to Fields' car, which was parked at the McDonald's. Fields drove Calhoun to his car at the Jefferson School, and Calhoun said the other two men were discussing lunch plans.

Calhoun said he and Bolstad decided against staying in the area overnight and went home. About two or three days after the event, after realizing who Fields was, Calhoun called the FBI.

In cross-examination, Calhoun told Charlottesville Commonwealth’s Attorney Joe Platania that he had worn a white polo shirt to the rally. Bolstad also confirmed she was wearing a white polo because Calhoun had told her it would signify they were aligned with the people attending the rally.

Neither Bolstad or Calhoun spent much more than an hour with Fields, but Bolstad said she was surprised when she learned Fields had driven the vehicle that killed Heyer.

“We figured he wasn’t the same guy because he didn’t seem like the kind of guy who would do this,” she said.

A Twitter account that appeared to belong to Bolstad made comments about Fields and the trial before and after her testimony Wednesday.

Before the account was made private shortly after Bolstad testified, a photograph of a subpoena addressed to Bolstad was posted after a comment doubted that she actually was testifying.

Philip DePue, a digital forensics expert from Sensei Enterprises, examined Fields' phone for Google Maps data from Aug. 12, 2017. He said Fields used searched for a route to his home in Maumee, Ohio, at 1:39 p.m., just a few minutes before the car attack.

DePue said the data did not show which of two possible routes Fields took, but neither would have directed him onto Fourth Street.

The last witness, Edmund Davis, a self-employed knife maker, said he had come to Charlottesville to rally against the proposed removal of two Confederate statues, which was ostensibly the reason for the rally. Davis said he became alarmed by what he saw, which included a man having milk poured in his eyes after being pepper-sprayed.

Following the declaration of an unlawful assembly, Davidson said he felt “cornered” by law enforcement. He was afraid he would be trapped by the “legion” of police and be “beaten down.”

Among the "violent signs" Davis said he saw was one that said “this machine kills fascists,” a phrase adopted by folk singer Woody Guthrie to refer to his guitar. The sign “changed the tone” of the demonstration completely, he said.

Judge Richard E. Moore dismissed the jury at about 4 p.m. and said he expected the defense's last two witnesses to be finished before lunch Thursday.

If the schedule remains the same and the commonwealth does not introduce rebuttal evidence, Moore said he expects closing statements to wrap up Thursday.

Tyler Hammel is a reporter for The Daily Progress. Contact him at (434) 978-7268, thammel@dailyprogress.com or @TylerHammelVA on Twitter.

Exhibits presented in the Fields trial