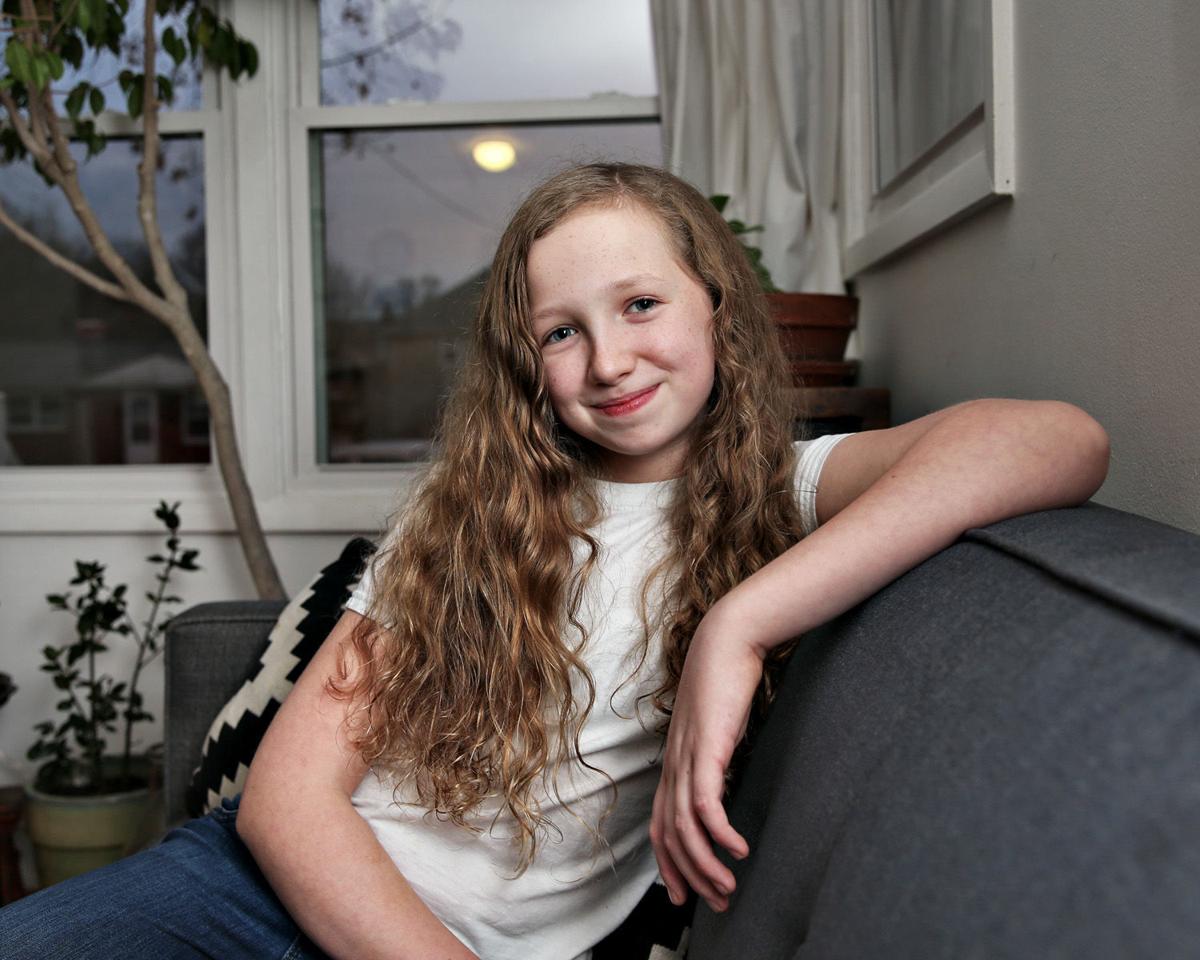 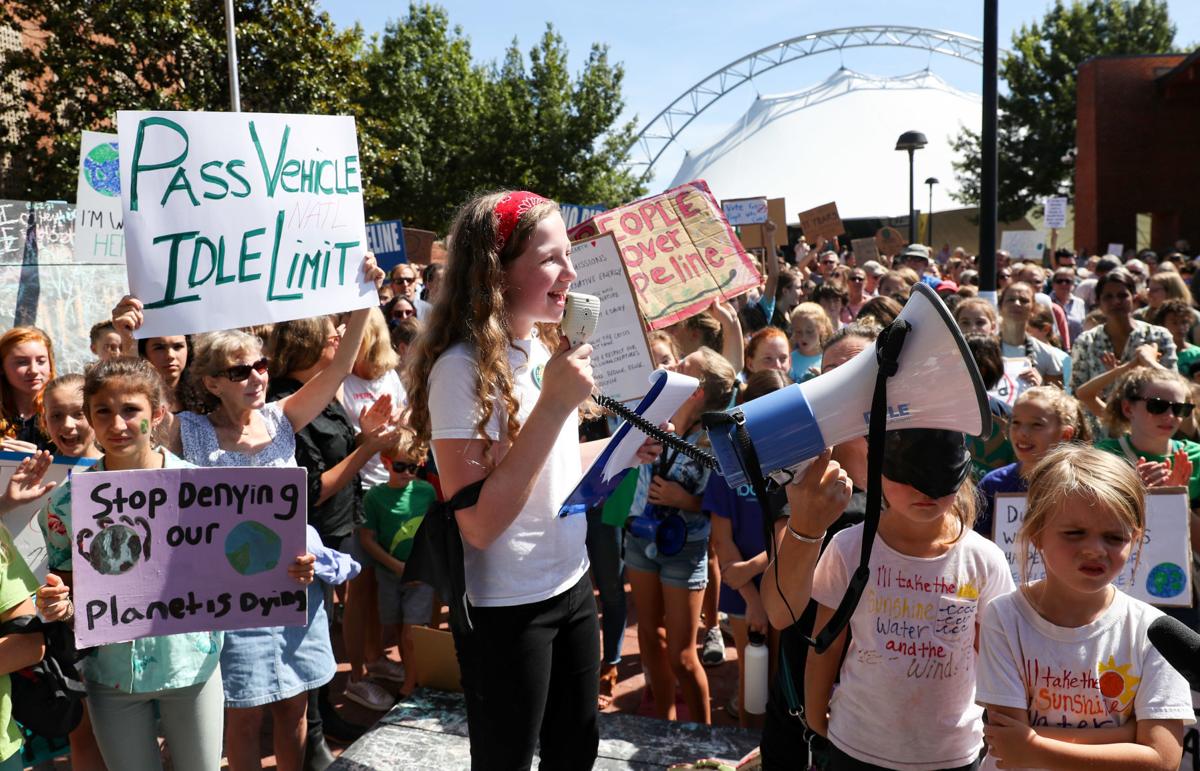 Seventh-grade activist and rally organizer Gudrun Campbell speaks to students and adults who attended the Charlottesville Youth Climate Strike at the Free Speech Wall in September.

Gudrun Campbell was nervous before her first climate strike.

Standing on the Downtown Mall this past March with Ezra Laiacona, a co-founder of the Cville Youth Climate Strike, they waited to see how many other students heeded their call to leave school.

“I really didn’t know if it was going to be 30 people or 300,” said Gudrun, now a seventh-grader at Buford Middle School. “I was nervous no one was going to show up.”

Nearly 200 people did show up to that first climate strike, and participation swelled for subsequent ones. Students from across the area brought posters calling for action. At each strike, Gudrun wielded a megaphone and exhorted attendees to demand action from adults in positions of power.

She called on those adults to pass the federal Green Deal, abandon pipeline projects and curb fossil fuel emissions.

Gudrun is passionate about this work. That’s clear as she discusses, during a recent interview, the strikes and the failures to stop what she says is a crisis. As she talks about meeting other climate strike organizers, her voice rises above the acceptable level for the library, where the interview is taking place, and a librarian has to issue the table a reminder to keep it down.

Gudrun’s interest in the issue was piqued about a year ago, when she began reading up on climate change and organizing strikes during a unit on teen activism in her her sixth-grade language arts class. Her teacher showed a video of Greta Thunberg, a Swedish teenager, speaking about climate change at a conference in Davos, Switzerland.

“I went home and I watched every speech she ever gave,” she said. “I think that’s when the urgency of the issue really hit me. I realized that there is this 16-year-old who is not going to school, giving speeches all over the world because she cares so much about this, and it occurred to me that I wasn’t doing enough to stop climate change.”

Since watching the speeches, Gudrun has taken the lead in planning local climate strikes with assistance from her parents, other students and local environmental organizations that are part of a consortium known as Cville 100.

“The core group from Cville 100 has been supporting Gudrun and helping her dream bigger, have more resources and have more people to do more,” said Elizabeth Stark, her mother.

Gudrun now is working with other students to formalize the Cville Youth Climate Strike as an organization. The group recently held its first meeting and is planning future events.

This activism from hundreds of area children has brought a new sense of urgency to the issue.

“It’s both inspiring but also a stark wake-up call,” said Michael Payne, who was elected to Charlottesville’s City Council in November and made tackling climate change a key part of his campaign.

Payne, who has attended the local youth climate strikes, said the children and teenagers are leading the way and have rallied more people to care about environmental causes.

He said young people shouldn’t let elected leaders tell them that what they are asking for is unreasonable, noting that the students are demanding action that matches the scale of the problem.

“What’s unreasonable is the reality of the climate crisis,” he said.

The planet’s average surface temperature has risen about 1.7 degrees Fahrenheit since the Industrial Revolution, according to NASA. The rising temperature is leading to warming oceans, more extreme weather and changes in habitats for animals.

“Earth’s climate is now changing faster than at any point in the history of modern civilization, primarily as a result of human activities,” scientists wrote in the National Climate Assessment released last November on Black Friday.

United Nations researchers said last year that the world only has until 2030 to stop the worst impacts of climate change, which include rising seas that flood cities; crop failures and famines; and weather-related disasters that kill and cause damage.

Claire Habel, the commercial program manager for the Charlottesville Climate Collaborative, said Gudrun’s activism reminds the community that young people are interested and engaged in this issue.

“Regardless of who you are, there’s a reason to be involved in the conversation,” she said. “We’re reminded this is not something we can look away from.”

Habel said Gudrun has inspired more students to take an interest in the issue and provided a pathway for parents to get involved.

Gudrun now is part of a network of young environmental activists involved with climate strikes and has traveled to protest with them. She went to New York City to march with 13-year-old activist Alexandria Villaseñor, who protests outside the United Nations and co-founded the United States Youth Climate Strike, and she marched in Washington, D.C.

“It was really cool to be there with Alexandria,” she said. “We walked and picked up some trash, which is always fun.”

Gudrun had protested before that first March strike, but actually planning the demonstrations was a different experience.

“When you hear about activism, you think you get to be in the news and you get to have a bunch of people at your rallies, but it was just a lot of emails,” she said. “I didn’t think I would email this much.”

Gudrun said her favorite part of the strikes has been listening to the speakers and hearing how climate change is affecting them and the community.

Gudrun’s efforts to combat climate change extend beyond the marches. At home, her family recycles and composts, though she said that individual action isn’t enough to stop the climate from changing.

“For a very, very long time, corporations have been telling us that if we bike to school or work and don’t eat meat as often, then climate change is going to be solved,” she said. “But that’s not the case.”

In school, Gudrun makes sure teachers know where she stands.

“We did a worksheet that told us all about clean coal,” she said with a chuckle. “We had to answer a question about why it would be good for the people of Ohio.”

Did she return a blank worksheet?

“Oh no, I filled it out,” she said. “My teacher got a very strongly worded answer to why clean coal would be bad for the people of Ohio.”

She said she learns about climate change and the environmental impacts of fossil fuel and coal in school, but not at the scale she would like.

She does find time to take a break from activism to focus on school, practice Brazilian jiu jitsu and play the cello. She even auditioned for a high school musical.

Those outlets are important because tackling climate change can be daunting.

“There’s not just one piece of legislation that can automatically solve it, and it goes away,” she said. “It’s this thing that is happening right now, and the longer you wait to take care of it, it’s going to get worse.”

Gudrun considers herself an optimistic person and hopes the planet can find a way to stop climate change.

“Honestly, as I learn more and more about climate change, hope becomes a lot harder to find,” she said.

At the end of the day, she would rather be playing cello or pursuing another interest — not spending her free time consumed with learning about and fighting climate change.

“As a kid in activism, I think it’s important to remember that it was never supposed to be your job to fix this,” she said. “... But also, if it’s an issue you care about, then it’s really great to make a change, because we need a change.”