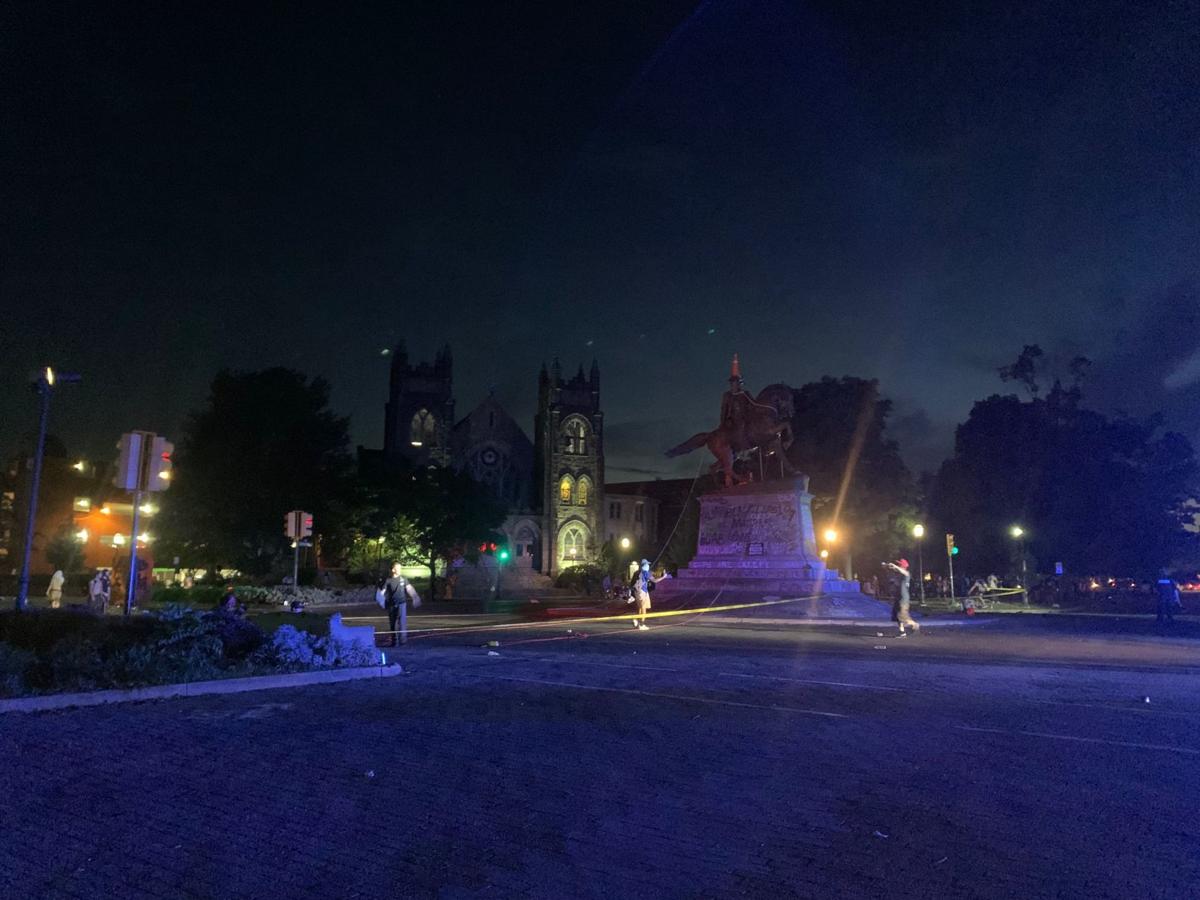 Police decended on Stuart Circle after protesters tied ropes around the J.E.B Stuart Confederate statue in an attempt to pull it down. 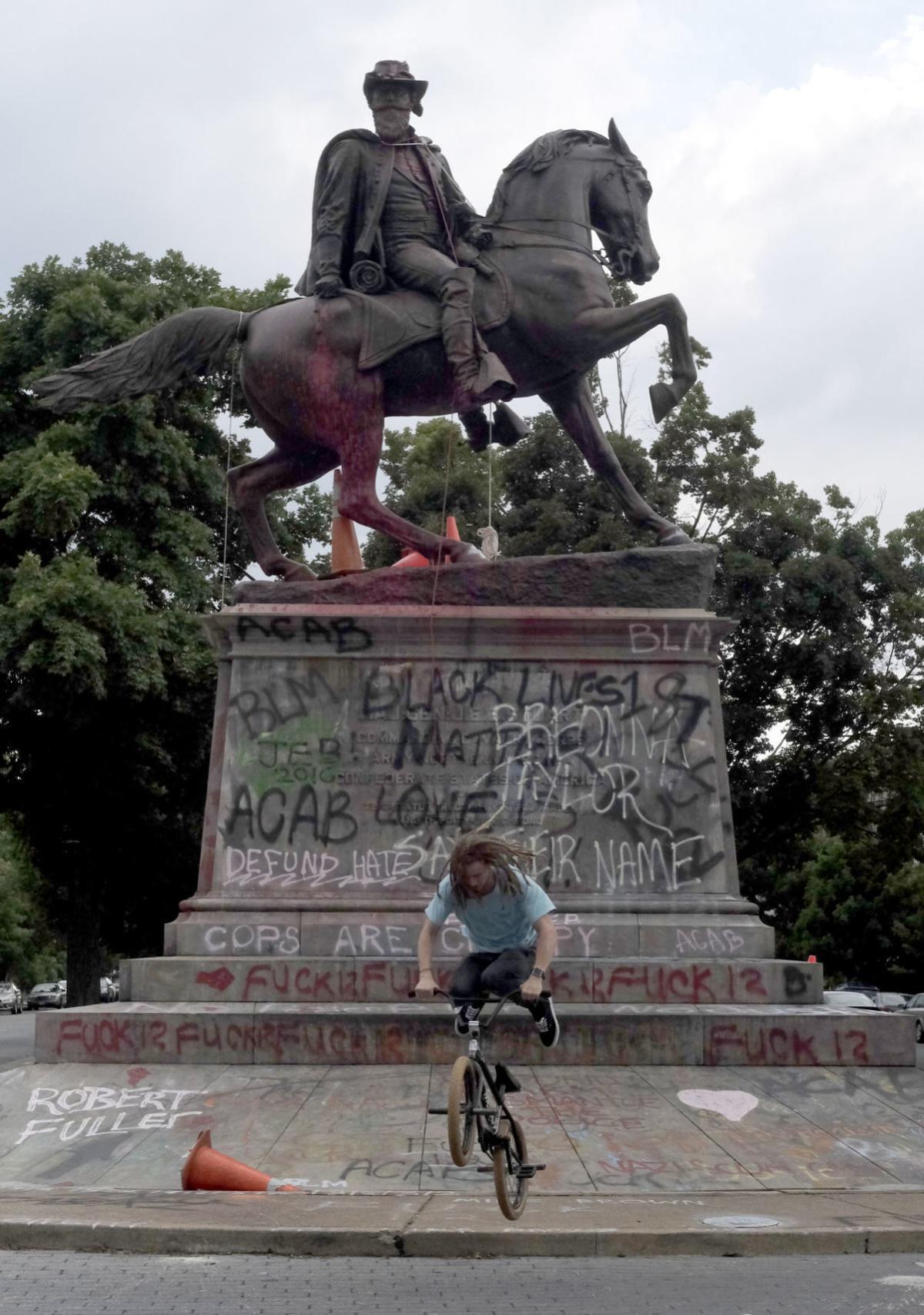 A bicyclist does a wheelie at the base of the statue of J.E. B. Stuart on Monument Ave. in Richmond, Monday. Crowds attempted to pull the statue down the night before.

Police decended on Stuart Circle after protesters tied ropes around the J.E.B Stuart Confederate statue in an attempt to pull it down.

A bicyclist does a wheelie at the base of the statue of J.E. B. Stuart on Monument Ave. in Richmond, Monday. Crowds attempted to pull the statue down the night before.

He told the City Council his administration is seeking a legal avenue to remove the controversial statues lining Monument Avenue before the city gains authority over them next week, on the heels of requests from council members worried about escalating tensions.

“I’m willing to take that risk,” Stoney said. “If I had Superman strength and could go and arrive at Monument Avenue and remove them by myself and get slapped with a class 6 felony, I would have done that yesterday.”

But any city employee or contractor who aided the removal could face charges, as well, Brown said; a risk Stoney said he did not want to take.

The discussion took place after protesters on Sunday night attached a rope to the J.E.B. Stuart statue on Monument Avenue in an unsuccessful attempt to pull it down. Police declared an unlawful assembly and sought to clear the area by firing tear gas canisters, pepper spray, rubber bullets and flash-bang grenades. They arrested six people and injured a journalist.

Sunday’s was the latest Confederate tribute targeted amid protests against police brutality that have unfolded over the last three weeks since the police killing of George Floyd.

In Portsmouth, a man was seriously injured when a crowd of protesters pulled down a Confederate statue. The incident prompted some localities to remove their statues out of fear of further injuries or accidental deaths. However, Brown is cautioning that course of action could invite legal repercussions.

Should city leaders act, he advised they seek a written assurance from Commonwealth’s Attorney Colette McEachin that she would not prosecute. Brown also floated requesting authority to remove the statues from Gov. Ralph Northam via an executive order.

Some on the council also called for the statues’ swift removal, saying they worried someone would be maimed or killed if protesters attempted to remove some of the larger tributes to the Confederacy in the city limits.

As some were still on the streets late Sunday night, two council members — Stephanie Lynch, 5th District, and Michael Jones, 9th District — took to social media to call for the immediate removal of Confederate memorials.

“Protestors have clearly shown they are willing to take the removal of these statues into their own hands, as we have seen with the removal of smaller monuments in the city,” according to a letter Jones and Lynch sent Brown on Monday. “There is a risk of people being injured or killed in an attempt to damage or remove the remaining monuments.”

Over the last three weeks, protests in Richmond have drawn thousands to marches decrying police brutality and racism. Daily gatherings have taken place on Monument Avenue, home to the country’s most prominent monuments to leaders of the Confederacy. As in other cities, protesters have sought to wrest from their pedestals the statues they view as symbols of white supremacy.

Three memorials to the Confederacy have been pulled down this month. Most notably, the statue depicting president of the Confederacy Jefferson Davis was toppled on Monument Avenue two weeks ago. A statue of Christopher Columbus also came down in Byrd Park, and the First Virginia Regiment Monument, a memorial to a state militia regiment formed in 1754 before the Revolutionary War, was removed from its perch in the Fan District within the last week.

No serious injuries have been reported from those incidents, but protesters in other cities have been hurt. The injury in Portsmouth led Norfolk to accelerate its plans to remove a Confederate monument, the Virginian Pilot reported. Elsewhere, officials in Farmville voted to take down a Confederate statue and removed it last week.

Brown drew a distinction between Norfolk’s decision and what Richmond leaders are contemplating.

“The situation just seems very distinguishable,” Brown said. “I’m going to continue to review their materials to see if there is anything we can use to help us that they’ve provided to me.”

Protesters in Richmond took removal into their own hands even after city officials unanimously pledged to relocate the statues from Monument Avenue under the state law that takes effect July 1.

Under that law, the City Council must hold a public hearing and publish notice of its intent in a newspaper. It also permits the council to conduct a nonbinding referendum regarding the monuments.

If the council votes for removal, it must hold a 30-day waiting period in which it offers to relocate the monuments to any museum, historical society or military battlefield, among other places.

Brown said his office would have an ordinance drafted to set that process in motion in time for a special meeting the council plans to schedule next Wednesday.