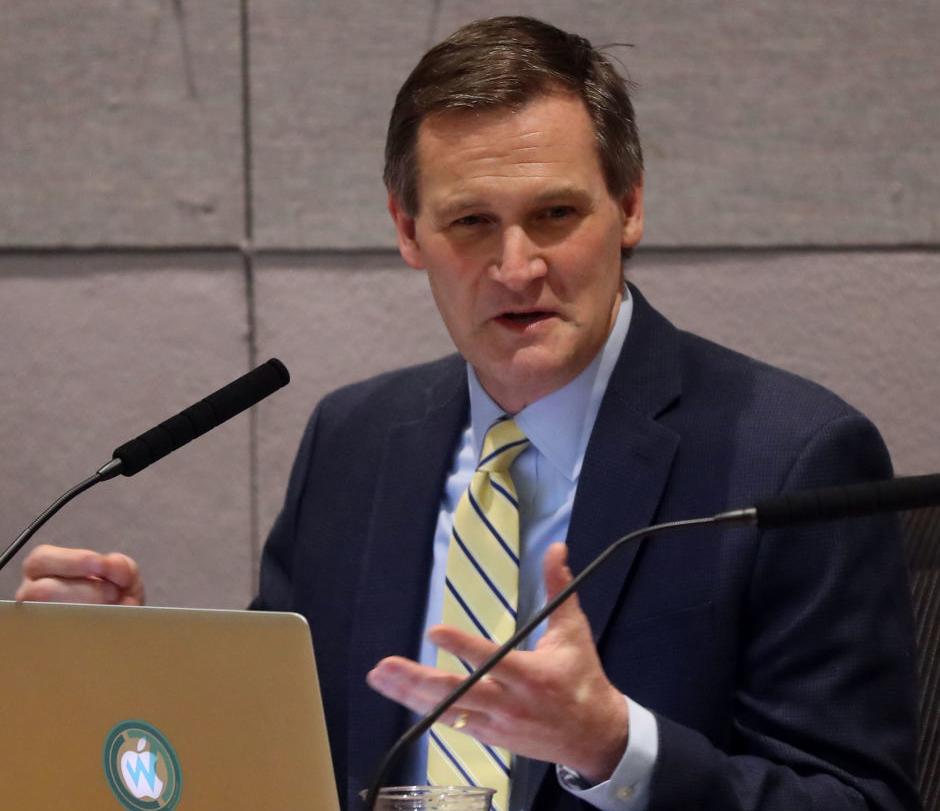 Mike Signer talks about his time on the Charlottesville City Council during his last council meeting earlier this month. 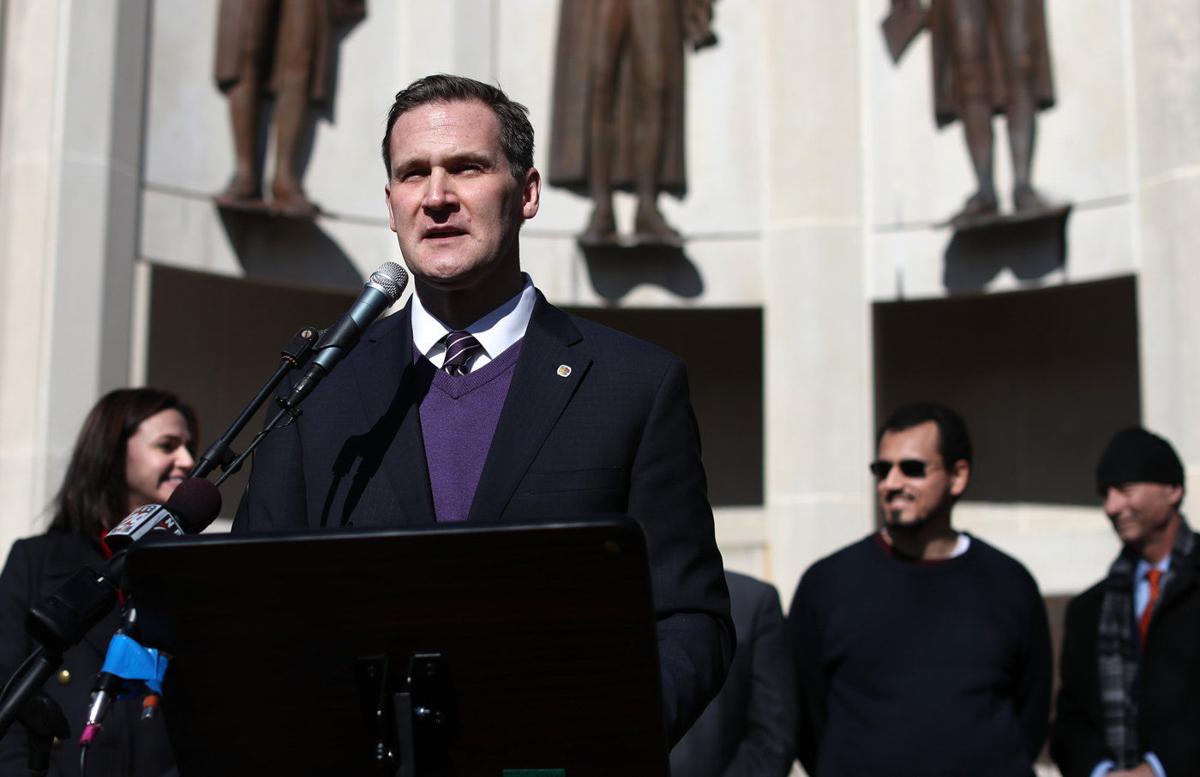 Then-Mayor Mike Signer declares the city of Charlottesville “a capital of the resistance” during a rally outside City Hall in January 2017, after President Donald Trump took office. 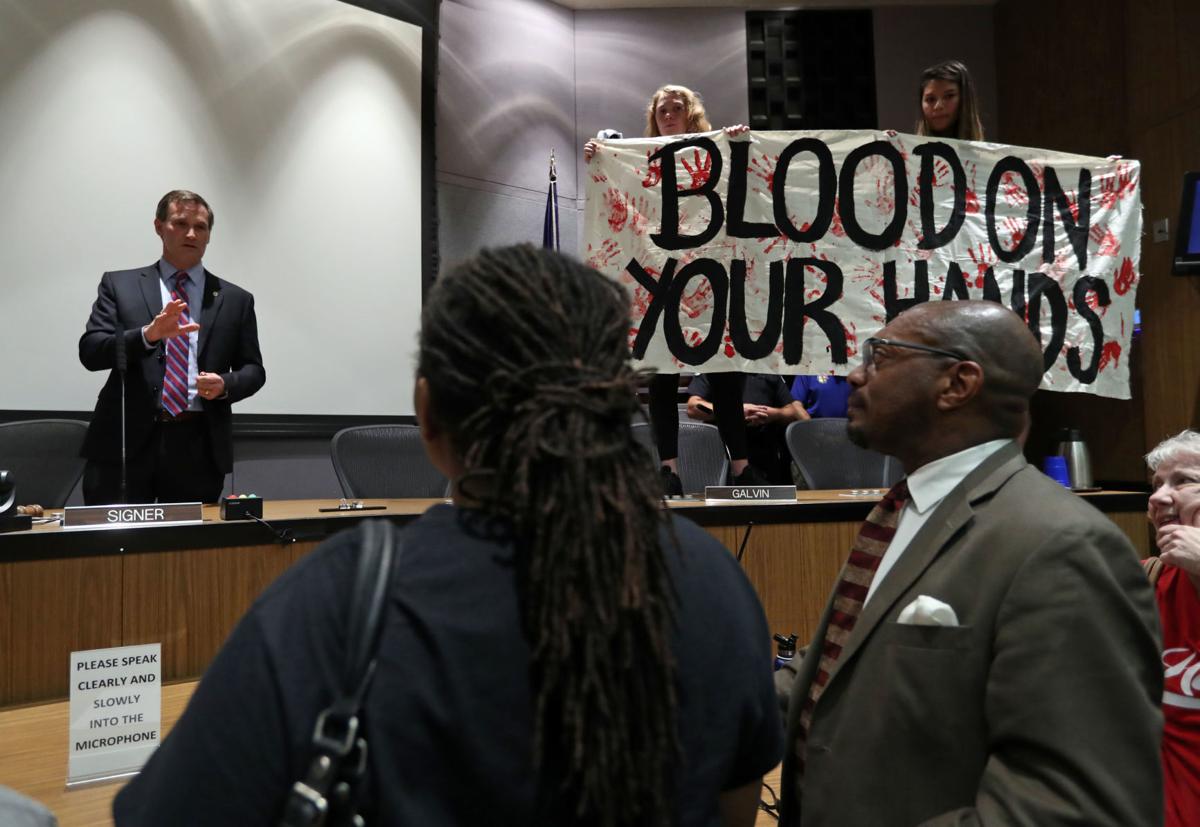 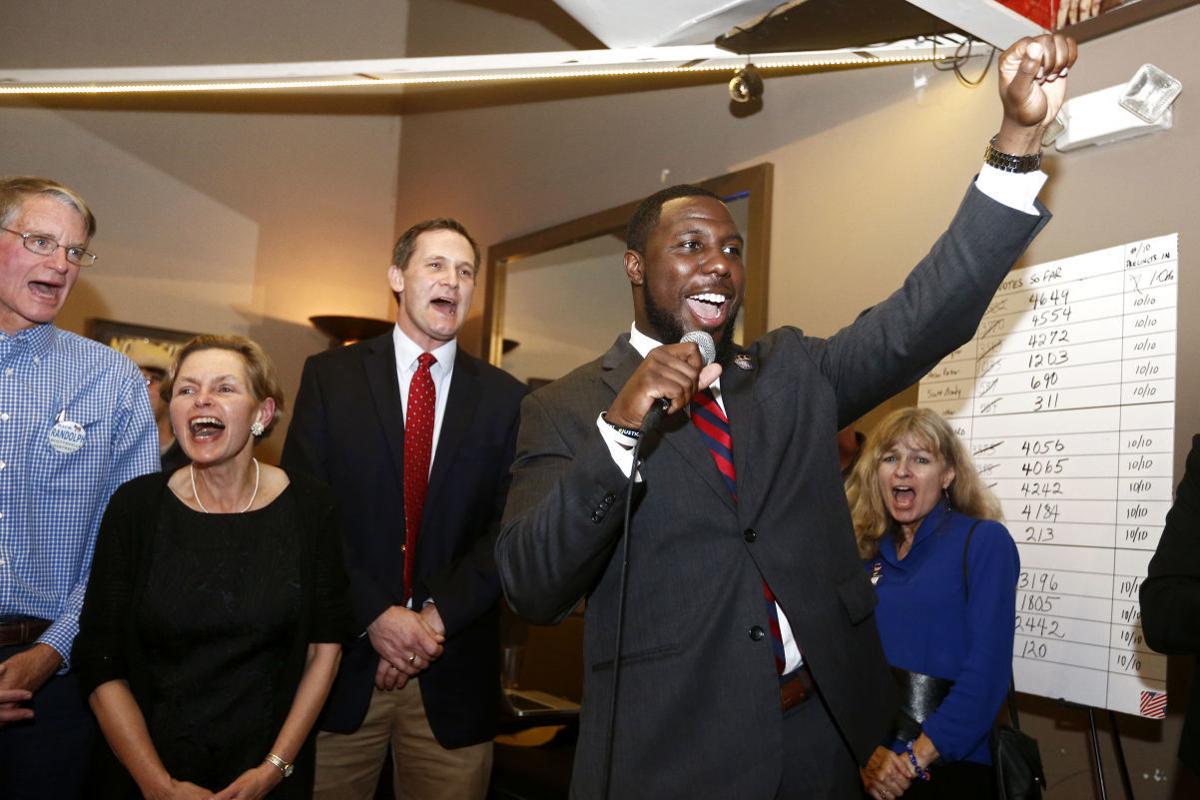 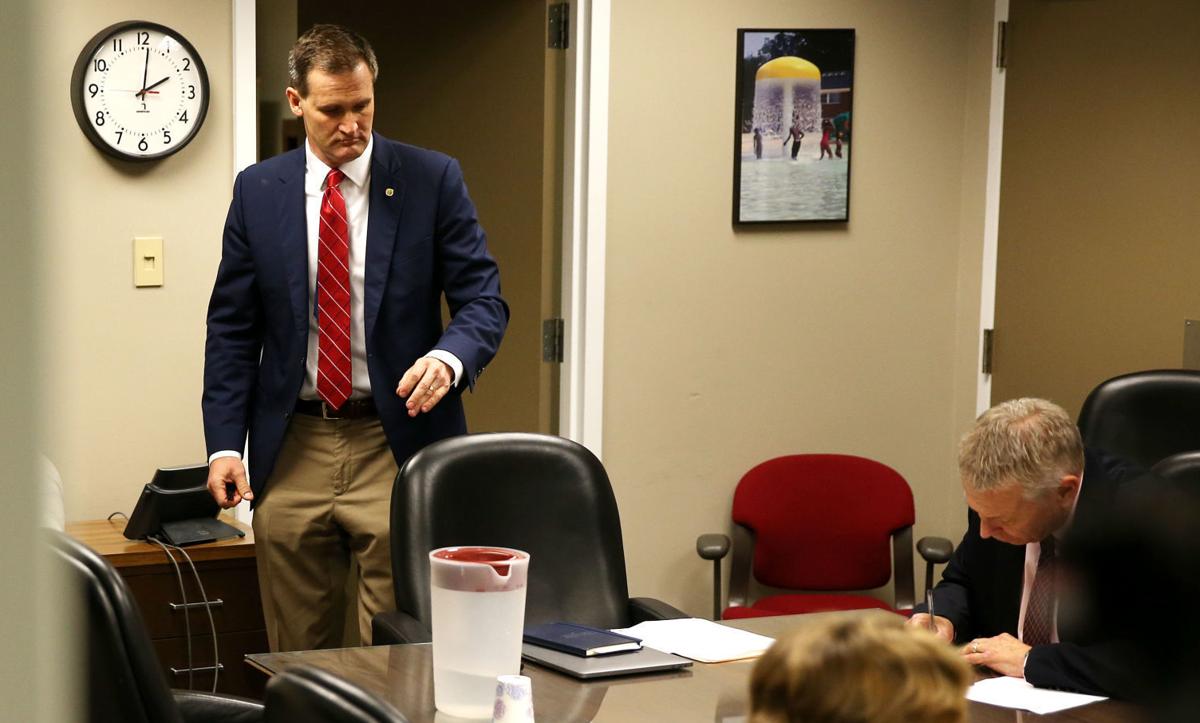 Then-Mayor Mike Signer enters the second-floor conference room in City Hall before a closed session meeting on Aug. 30, 2017. The meeting lasted well over three hours and concluded with Signer issuing an apology for a Facebook post regarding the events of Aug. 12.

Mike Signer talks about his time on the Charlottesville City Council during his last council meeting earlier this month.

Then-Mayor Mike Signer declares the city of Charlottesville “a capital of the resistance” during a rally outside City Hall in January 2017, after President Donald Trump took office.

Then-Mayor Mike Signer enters the second-floor conference room in City Hall before a closed session meeting on Aug. 30, 2017. The meeting lasted well over three hours and concluded with Signer issuing an apology for a Facebook post regarding the events of Aug. 12.

The man who sat deep in conversation at a Charlottesville coffee shop last week easily could have blended into the background.

That’s just how things have shaken out for Mike Signer, who has quietly faded from the local — and national — spotlight since 2017.

Gone are the days when he was at the center of the Unite the Right rally. Now, he can sit and wave to people he recognizes while sipping coffee and discussing the past four years.

His time on Charlottesville’s City Council is unofficially at an end. Although his term doesn’t expire until Tuesday, there are no more council meetings and new councilors have been sworn in.

Signer’s time as mayor during the event that spotlighted this community to the world has been nothing short of polarizing.

Take his final meeting, for example. Activist Nancy Carpenter told him, “Mr. Signer, I’m sorry, you failed us horribly as mayor.” A few minutes later, former Mayor Dave Norris told Signer and the other outgoing councilors that, “We haven’t always seen eye to eye, but I appreciate your service to the community.”

Signer, an Arlington native, was first exposed to Charlottesville through gifted-education programs he attended during grade school.

He remembers a love for the city and the University of Virginia, fueling a desire to come back. His education and career as an attorney took him to different parts of the country before he bought a house and commuted to Richmond to work in Gov. Mark R. Warner’s administration.

“I was always coming back to Charlottesville,” he said.

Signer was someone many saw as a rising star within the Democratic Party in the state.

After helping with Perriello’s surprise election to the 5th Congressional District seat in 2008, Signer was inspired to seek office himself.

Rather than start small, he jumped in head first with a bid for lieutenant governor, hoping to capture the same energy that propelled Perriello to Washington.

His bid was short-lived as Signer garnered only about 21% of the vote in the 2009 Democratic primary, losing to Jody Wagner. Wagner would go on to lose to Republican Bill Bolling in the general election.

After the humbling defeat, Signer decided to live a more “local life” in Charlottesville. He became president of his neighborhood association and remained involved in local Democratic politics.

Then, in 2015, Mayor Satyendra Huja decided not to seek re-election to the council and Signer stepped back into the spotlight.

He was elected alongside Wes Bellamy and Kathy Galvin, who won her second four-year term that year.

Signer was then appointed as mayor and started down a path that would make him a polarizing figure nearly 20 months before Charlottesville drew the eyes of the world.

The role of mayor

The city’s mayorship is largely ceremonial and carries little power in Charlottesville’s council-manager form of government.

But Signer said he decided to take a more “proactive” approach and be more “vigorous.”

He reopened the mayor’s office, a room tucked in the back corner of the city manager’s office. He held office hours, pushed open-data policies, met with Albemarle County officials and started crafting a deal to restart construction on the Landmark Hotel.

He was around City Hall many days of the week, interacting with city staff. That high visibility, he admits, caused confusion among the public and staff about just how much power the mayor actually holds.

“I could have played it safer as a new mayor,” Signer said.

One of Signer’s early initiatives was to work with the City Council to create rules for its meetings, which previously had operated without a consistent structure.

In March 2016, the council approved regulations that included time limits for agenda items, guidelines for interactions with staff and a new process for people to be able to speak during public comment times.

By July 2016, the rules led to a controversy when a man filed a lawsuit because he was removed from the meeting after making derogatory statements about Muslims. The rules prohibited speakers from making defamatory remarks about groups. The council eventually removed that provision.

The rules have remained a sore spot for some community members who say they stifle public input. Signer has defended them as necessary for effective deliberation and government action.

As mayor, the job of enforcing those rules fell to Signer. He would cut speakers off when their allotted time expired and expelled some residents at meetings around Aug. 12, 2017, effectively cementing his role as the bad guy.

He said sticking to those rules was “the hardest thing I’ve ever had to do.”

Capital of the resistance

Signer said his “hair was on fire” and he felt compelled to act after meeting with a group of refugees who were frightened by the president’s remarks on immigration and Muslims.

That meeting led to Signer’s now-infamous declaration of Charlottesville as “a capital of the resistance.”

Many have pointed to the declaration as one of the flashpoints that led to the deadly Unite the Right rally. The Heaphy report, commissioned by the city to investigate the events of that summer, didn’t directly link the two events, but it did, however, criticize elected officials’ role related to the day.

Looking back, Signer said the declaration could have been titled “less grandiosely,” but it was important to provide solidarity to those who were being maligned.

“I think the motivation of it was spot on,” he said. “I think that it did provide refugees and immigrants here with a sense of safety and solidarity.”

The events of 2017 and Signer’s role in them have been extensively documented, from the decision to remove the city’s Confederate statues to the Klu Klux Klan and Unite the Right rallies.

The role of Signer and the council in the government before and during those events created a rift between elected officials, city staff and the public.

The Heaphy report highlighted how Signer’s role in operations and his “resistance” declaration led to a confusion around authority.

The report included notes about the push to move the Unite the Right rally and some warnings from officials that Signer was stepping into operational details.

The report also included a comment from a Charlottesville Police Department lieutenant who felt the “resistance” event was “a recipe for undermining the legitimacy of institutions of government.”

Signer was in the command center of city, county and state officials during the KKK rally on July 8, 2017. But between that event and Unite the Right, non-elected city and police leadership made the decision to no longer include elected officials in emergency management.

In Signer’s eyes, the decision to use tear gas on counter-protesters at the KKK rally was an important flashpoint that led to the breakdowns on Aug. 12.

On Aug. 12, Signer wasn’t allowed in the command center. He tried to enter more than once, but was turned away.

His actions around the rally led the council to hold several meetings behind closed doors, criticizing his role and leading to a decision to diminish the office of the mayor.

Looking back, Signer maintains that it was important for his involvement on Aug. 12 because, although the mayor doesn’t hold the power, the public and media turned to him for information throughout the day.

“They didn’t trust elected officials to be around the table where decisions were going to be made,” Signer said of city leadership. “That’s why they barred me from the command center. But, to me, it compounded the issues because the public was so panicked and terrified.”

Signer has since led Communities Overcoming Extremism: The After Charlottesville Project to provide guidance to localities about dealing with such crises. He said the government needs to decide whether or not to fully involve elected officials in decisions and then stick with that plan. But, he said, every community is different.

“There are no easy answers and no silver bullets here,” he said.

Moving forward, Signer said the city has several issues to tackle, including big investments in schools and affordable housing.

Down to his last meeting, Signer stuck to the council rules, and hopes they carry on in coming years.

He looks back at the last two years, when he was no longer mayor, and remembers a quieter role.

Some of his favorite accomplishments range from large investments in affordable housing to what seem like small measures, such as revisions to regulations for Business/Professional/Occupational License taxes.

One of his main disappointments is a failure to make progress on the empty Landmark building, now known as The Laramore, on the Downtown Mall.

Getting construction restarted on the project was one of Signer’s campaign promises. He helped to craft a deal to incentivize construction in 2017 through an agreement to provide more than $1 million in tax breaks for the property owner. The agreement also guaranteed 75 spots in the Water Street Parking Garage and, on the part of the developer, required at least $20 million investment and substantial construction by fall 2020.

The framework for the deal was approved in March 2017, but nine months later, a divided council voted it down. Signer said he was “crushed” when it didn’t pass.

As he transitions out of public service, Signer said he doesn’t have plans to run for office again. He’s going to focus on his family and day job as legal counsel for app developer WillowTree. His next project is a book about the events of 2017 and what lessons can be learned from the rally.

The past four years have brought turmoil and Signer has been the target of much anger in the community. With all the personal attacks and everything that transpired, was it all worth it?