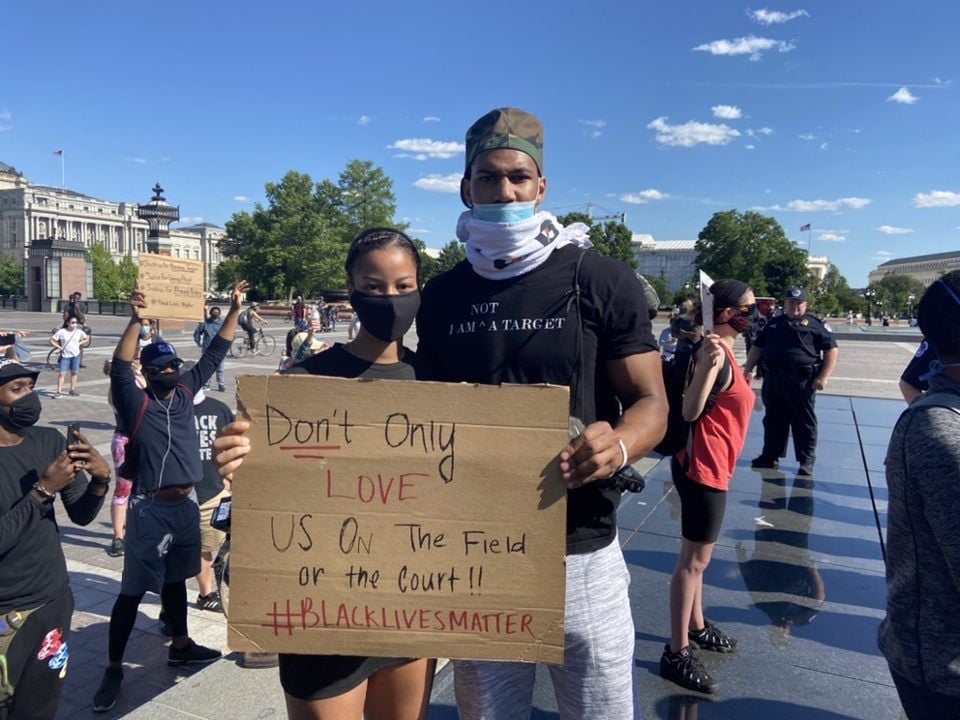 Carole Miller (left) and Charles Snowden pose for a photo at a June 1 protest in Washington D.C. Miller plays for UVa women’s basketball, and Snowden is a member of UVa’s football team. Find more photos at DailyProgress.com. 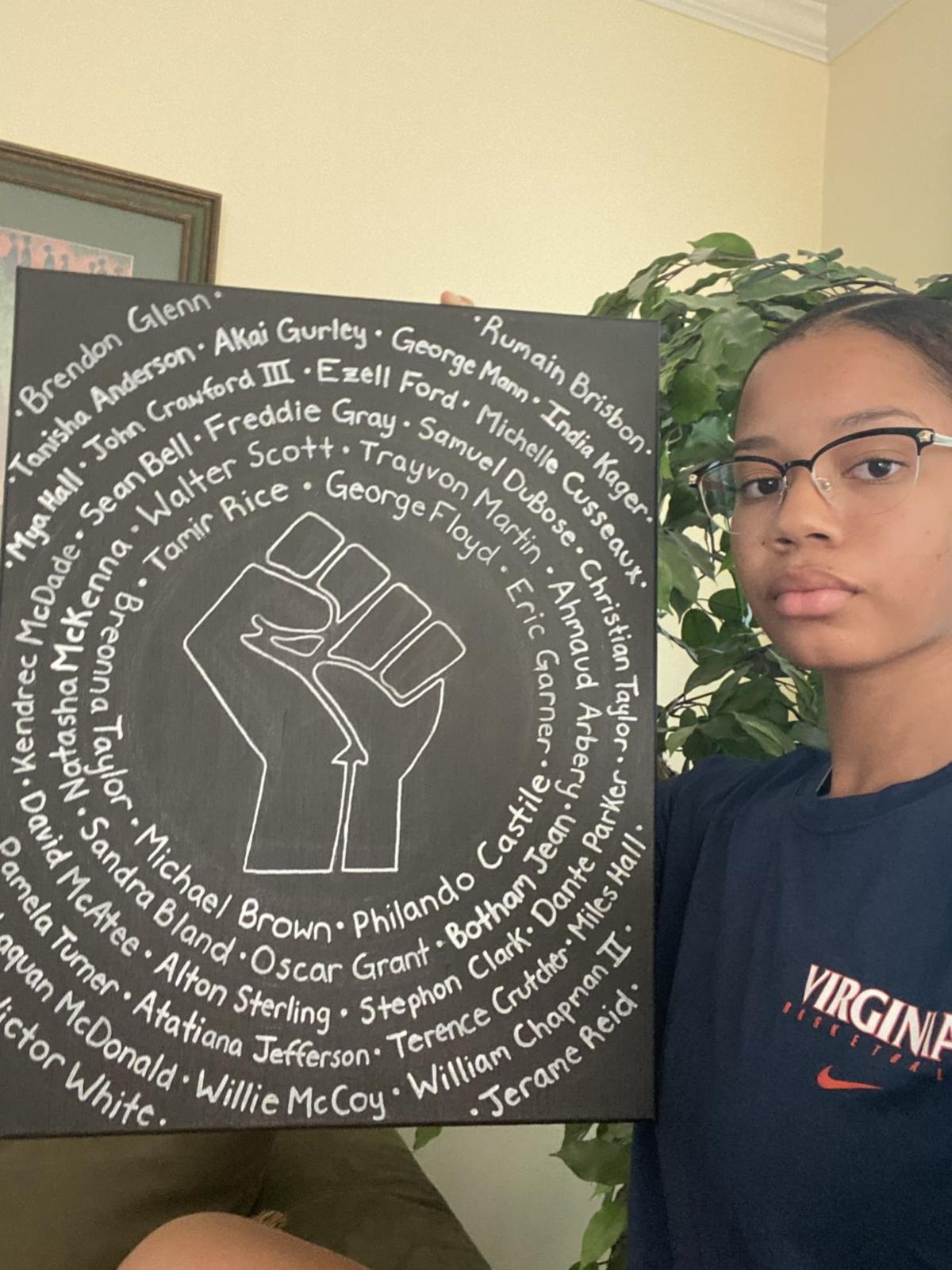 Carole Miller poses with a poster she planned to take to a protest in the Washington D.C. area.

Carole Miller (left) and Charles Snowden pose for a photo at a June 1 protest in Washington D.C. Miller plays for UVa women’s basketball, and Snowden is a member of UVa’s football team. Find more photos at DailyProgress.com.

Carole Miller poses with a poster she planned to take to a protest in the Washington D.C. area.

Charles Snowden notices the difference when he walks around Charlottesville without UVa gear. When he wears his team-issued football clothing, he’s greeted eagerly by those in town. When he doesn’t wear it, not every interaction is as friendly.

“It’s nothing overt, like people don’t treat you much differently but it’s just the small things,” Snowden said in a joint virtual interview. “I remember one time I walked through a CVS, and I could just feel — it was just me and the cashier — I could just feel his eyes kind of watching me as I went through, walked around the store.”

Moments like those, coupled with the brutal death of George Floyd after a white police officer knelt on his neck, motivate UVa’s star linebacker to protest racial injustice in the United States.

At a protest in Washington D.C. on June 1, Snowden held up a sign reading “Don’t only love us on the field or the court!! #BlackLivesMatter.”

“That feeling of that security on the field, all that love and appreciation we see on the field, just make sure it’s reciprocated off the field, not just for the athletes as well, just for black people in the Charlottesville area,” Snowden said.

Snowden wasn’t the only UVa athlete at the June 1 protest in D.C. The NFL prospect and rising senior bumped into Carole Miller, a rising sophomore guard on the UVa women’s basketball team.

The two stopped to take a photo holding Snowden’s sign.

“When I saw him I was happy,” Miller said. “I was like, ‘Oh my God, somebody I know from UVa,’ and I immediately knew we needed to take a picture. At first I didn’t even know what his sign said, but after we took the picture and I looked back and I saw it, I was like ‘That was perfect.’”

“I think it’s so powerful,” Miller said of Snowden’s sign. “Being an athlete at UVa, we are often performing for a white crowd the majority of the time. Sure, like, we are your entertainment, but if you can support us on the court, you can also support our voices in real life and stuff that actually affects us.”

In Miller’s eyes, there are plenty UVa fans and anyone in the local community can work to help bring about change and an end to racial injustice. In some cases, that can mean speaking up for the black community. Other people may choose to donate to causes to help end racial injustice.

Miller and Snowden are taking to the streets of our nation’s capital to speak up and demand action.

“I feel like in this time you shouldn’t feel pressured to speak out about something, but if you do agree with what we are saying, there’s so many other things you can do that isn’t protesting, that isn’t posting and showing solidarity,” Miller said. “You can donate. You can vote. You can do all these things that will equally help, and you don’t have to, like, perform for people and say, ‘Oh, I did this. I’m on your side.’ You can do it in silence; you can do it loud, but do something.”

Both UVa student-athletes were impressed at how the majority of protestors wanted to bring about change through non-violent demonstrations.

Miller said the crowd policed itself at times, with the leaders of the march calming down anyone in the group who wanted to turn the protest violent. At one point, Miller saw a small group of intoxicated white people. One of them looked like he might throw a wine bottle. Quickly, the group acted to ensure he wouldn’t cause a scene in front of the White House.

Protestors were gathered on the edge of Lafayette Square on the Monday evening when police used tear gas canisters and PepperBalls to disperse the crowd. Moving the crowd out of the way allowed President Trump to take a photo in front of St. John’s Church.

That moment angered both Miller and Snowden. It also caused a whirlwind of emotions for Snowden, knowing that others were there with him standing up for what they believe in.

Miller left earlier in the day and saw the removal of protestors via social media, while Snowden remained in the D.C. area. He says he was about five yards away from the National Guard near the White House when crowds were dispersed.

When Snowden saw police step back, he and other protesters thought it was a good sign.

Instead, the group heard two loud bangs and Snowden saw officers on horses to his left. Protesters began to clear out. Leaders of the demonstration urged those in Snowden’s group to slowly walk out while remaining calm.

“That really just eased me, but as we were turning and walking, this one dude, he had this white stuff all up and down his neck,” Snowden said. “His eyes were red, and they poured some solution on them, and that’s when I was like, people are really out here sacrificing themselves on the front line.”

Despite some stressful moments, Snowden remains steadfast in his desire to use his platform for change. He’s protested a handful of times and planned to protest Tuesday evening after his afternoon call with the media.

Seeing others fight for the black community, including other UVa student-athletes like Carole Miller, inspires Snowden to continue speaking out against racial injustice.

“That’s powerful,” Snowden said. “It just shows that she’s invested and she cares, and I mean, she’s lived with it as well — she’s a black woman in the United States of America. To see her out trying to garner change just the same way I am, it’s reassuring just to know that we’re not in this alone, and there is a community of people that think like me and want to support me.”