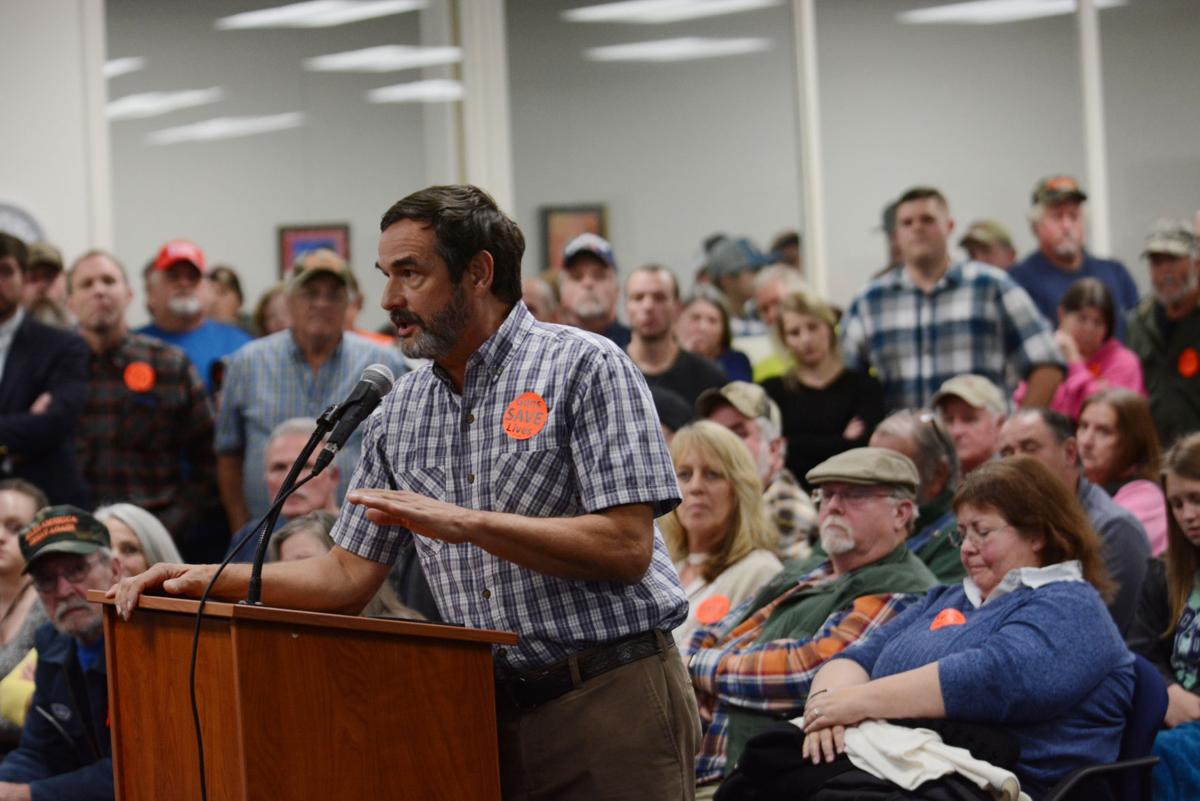 Charles Bowman addresses the Orange County Board of Supervisors during public comment Tuesday night, urging the board to adopt a resolution making Orange County a "Second Amendment sanctuary." 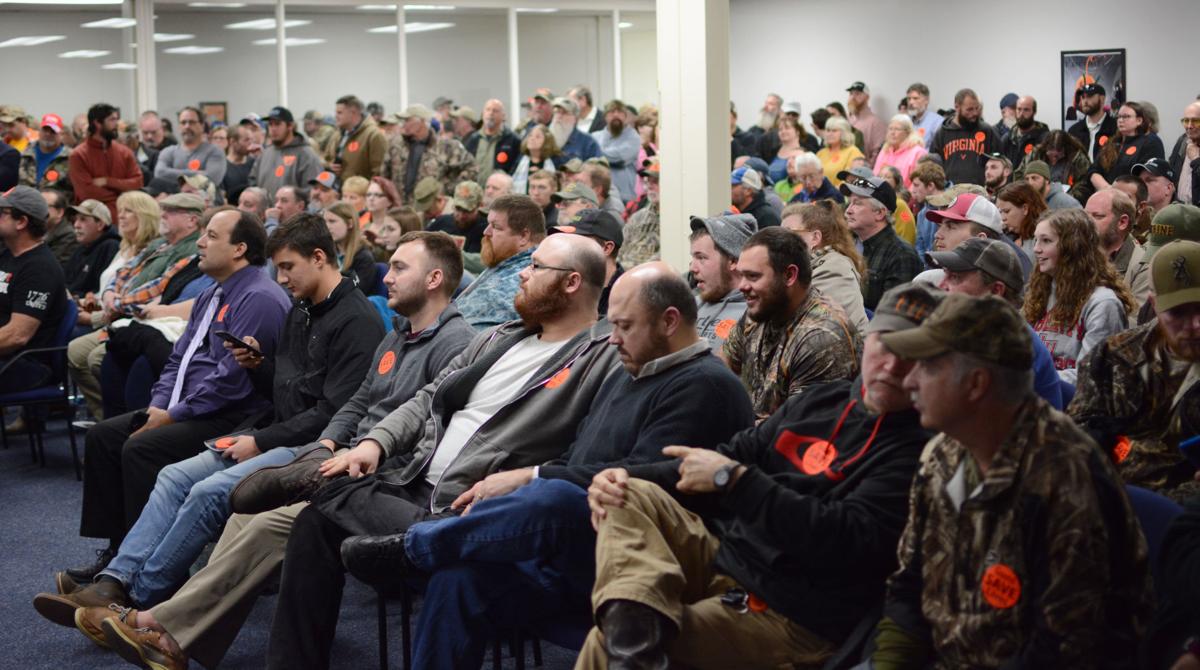 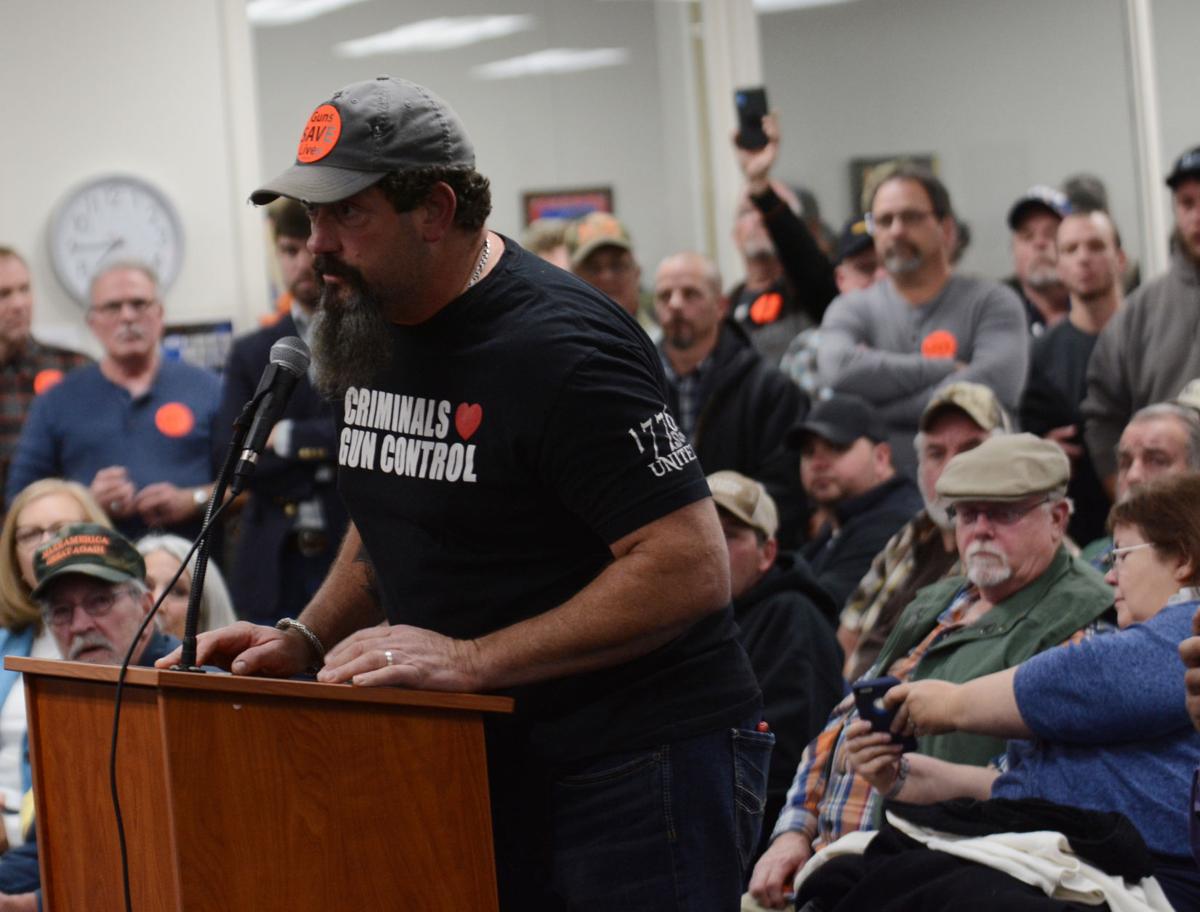 Eric Hopwood, like many in the audience, sported a blaze orange sticker saying "Guns save lives." He encouraged the board of supervisors to support a resolution proclaiming Orange County a "Second Amendment sanctuary."

Charles Bowman addresses the Orange County Board of Supervisors during public comment Tuesday night, urging the board to adopt a resolution making Orange County a "Second Amendment sanctuary."

Eric Hopwood, like many in the audience, sported a blaze orange sticker saying "Guns save lives." He encouraged the board of supervisors to support a resolution proclaiming Orange County a "Second Amendment sanctuary."

The Orange County Board of Supervisors essentially adopted two resolutions Tuesday night related to possible statewide gun control legislation—one that satisfied the five board members, and then another that satisfied most of the 750 or more people crowded in and around the Taylor Education Administration Complex.

At a two-hour public comment session, dozens of speakers—many wearing blaze orange stickers reading “Guns Save Lives”—spoke in favor of Orange becoming the 32nd Virginia county to declare itself a “Second Amendment sanctuary.”

Board members listened as a cross-section of constituents implored them to protect their right to bear arms and to send a message to the legislature and executive branch in Richmond that most gun owners are responsible, law abiding citizens and attempts to restrict guns was legislative overreach.

Supervisors heard history lessons about how tyrannical regimes oppressed subjects first by attempting to disarm them. Most speakers told the board they deserved the right to protect themselves, their property and, most importantly, their families.

“A gun in my hand is better than the entire police force on the phone,” John Pugh told the board, holding his infant daughter in his arms. “I have a right to protect my family.”

Pastor David Knighton said the people in the room were law-abiding citizens, but the laws being proposed in Richmond would turn them into felons.

Delegate Nick Freitas told the board guns allow those who are weaker the ability to defend themselves against stronger assailants. Proposed gun restriction measures would “create more victims in the process,” he suggested.

Lloyd “Doc” Garnett said the opening shots of the American Revolution were fired by American civilians at their tyrant’s soldiers who intended to confiscate their arms and power. He warned the board of the “totalitarian impulses of the radicals in Richmond.”

Sammy Higginbotham said the “chains of tyranny are being forged, link by link in Richmond and in Washington,” and asked what other rights might be threatened? “Will the people resist? I don’t know. I pray not. But I don’t want to be put to that choice.”

Todd Oliver said the 13 colonies took a stand together, noting many other counties throughout the commonwealth have adopted “Second Amendment sanctuary” resolutions. "United we stand; divided we fall," he said.

Ron Matalavage said he was using his First Amendment right to protect his Second Amendment right. Brit Lewis spoke of using a gun to protect herself and her family from intruders on her property. Orange County Republican Committee Chairman Jordan Marshall likened the county's citizens to lambs vulnerable to overreaching legislative wolves and encouraged the board to “be good shepherds.”

Paul Moog, a Navy veteran, said he swore an oath to protect the nation against enemies foreign and domestic, noting he considered “the governor and his party domestic enemies.”

Of the more than 40 speakers, only Tracy Laughlin spoke against a “Second Amendment sanctuary” resolution. She said she didn’t believe guns save lives and, despite fervent pleas from many that the board vote this evening, suggested the board instead schedule a formal public hearing on the proposed measure. “Any vote at this time would be inappropriate, because this board does not have the right to pass this without due process that was a hallmark of the constitutional democracy—which everyone in this room purports to love,” she said.

Charles Bowman was one of the evening’s final speakers and told the board it would be making a statement tonight—one way or another.

Some spoke eloquently, some emotionally, others from experience, all passionately.

Ultimately, the public comment session came to a close and the supervisors had a chance to share their thoughts and views.

District 2 Supervisor and board chair Jim White commended the audience and said they “sent an incredibly powerful message to the general assembly and the governor” with their words and their actions at the evening's public comment session.

“What you’ve been saying is what’s obvious to us—that a single election won in a handful of districts, doesn’t given them the authority to change the constitution of Virginia or the U.S. Constitution. I’m pleased you addressed those topics.”

He encouraged those assembled to harness their energy to begin the process of redirecting the focus on problems—such as criminals with guns or those suffering from mental health issues who own guns.

District 3 Supervisor Teel Goodwin—the only board member wearing a “Guns Save Lives” sticker—rattled off the names of most major gun manufacturers and said, “They’re all in my closet.”

“As far as I’m concerned, the governor can go to hell,” he said. “They’re my guns and my decision.”

District 4 Supervisor Jim Crozier got a little choked up talking about his family’s proud military history and heritage and thanked them for the service which he credited for allowing him to be sitting on the board and before his constituents this evening.

He said his initial inclination was to listen, take the citizen comments under advisement and vote later, but instead felt the board should take action this evening. “We cannot allow our rights to be taken away,” he said, noting he was not in favor of the draft resolution the board had before it. “We need to send a clear and distinct message in a positive manner as you all have done tonight.”

Soon, the “positive manner” was tempered as it became clear the board was not considering a straight up or down vote on whether it would declare Orange County a “Second Amendment sanctuary.”

District 5 Supervisor Lee Frame, who spent nearly 30 years in the Navy, said he supported the Second Amendment, had a concealed carry permit and owned a number of guns. “Having guns is what we’re about in a rural county, but I don’t want to see us pass a resolution that ends up with us violating the law as a county.” He said he favored a resolution that addressed specific problems associated with guns and not those related to those who own and use guns in compliance with the laws and don’t cause any problems.

After hearing many historical references, District 1 Supervisor Mark Johnson offered a civics lesson instead. “You’re looking up here, but you’re looking the wrong way,” he told the audience. “You’re the ones in power.”

He said whatever happened tonight was far less important than what happens next November and the November after that. “The two real levers of power are the ballot box and the court system,” he said. “If the general assembly adopts a law you believe is unconstitutional you need to be ready to file a lawsuit the next day.”

With that, Johnson made a motion the board approve a resolution, stating, “We urge the governor and general assembly to focus on laws that would reduce weapons in the hands of convicted felons, people with mental health problems, while carefully respecting and protecting the Second Amendment rights of all law-abiding Virginians, who use firearms in protection of their homes, lives and families and sporting and hunting purposes.”

Before the proposed resolution received a second (ultimately from Crozier), Johnson reminded the audience that the issue at hand involves “proposed” legislation at this point and to condemn actions that haven’t yet happened is a “futile gesture,” though he assured the audience if the general assembly adopted legislation that was contra-constitutional, the board would oppose it.

Crozier said Orange County could be “leaders instead of lemmings” when it came to opposing proposed overreaching gun legislation. “We want to stand above and ahead of places that have just rubber-stamped what others have done,” he said.

Citizens then implored the board with shouts of “put it to a vote,” and “we want a sanctuary county,” and “let’s see who’s not for it” and “it’s time to act,” and “where do you stand?”

White reminded the audience “it’s no good to make noise without impact,” and chastised those who walked out angrily.

The board voted 5-0 in favor of Johnson’s motion and the proposed resolution.

But the audience wasn’t satisfied.

“I think it’s clear we all want the same thing,” White said. “The question is how do we get there?”

Amid shouts about “sanctuary county!” and “show a little backbone,” and “join the other counties!” Moog recommended the board adopt a second resolution that “Orange is a Second Amendment sanctuary and you’ll do everything in your constitutional power to defend the Second Amendment rights of Orange County citizens,” receiving one of the largest cheers of the evening.

He suggested it was an “elegant solution,” allowing the board to “support citizens’ rights without violating the law.”

Crozier then turned Moog’s comments into a motion, and rather than adopt a second resolution, “and confuse the dear souls in Richmond,” Johnson recommended submitting just one combined resolution, blending the two.

Frame had issue, though, and asked if the motion could be amended to remove calling Orange County a “sanctuary county,” but didn’t have support for a second.

Ultimately, the board voted 4-1 on the new, combined amendment, with Frame dissenting. A hearty cheer from the hundreds remaining ensued and the board adjourned after two and a half hours.