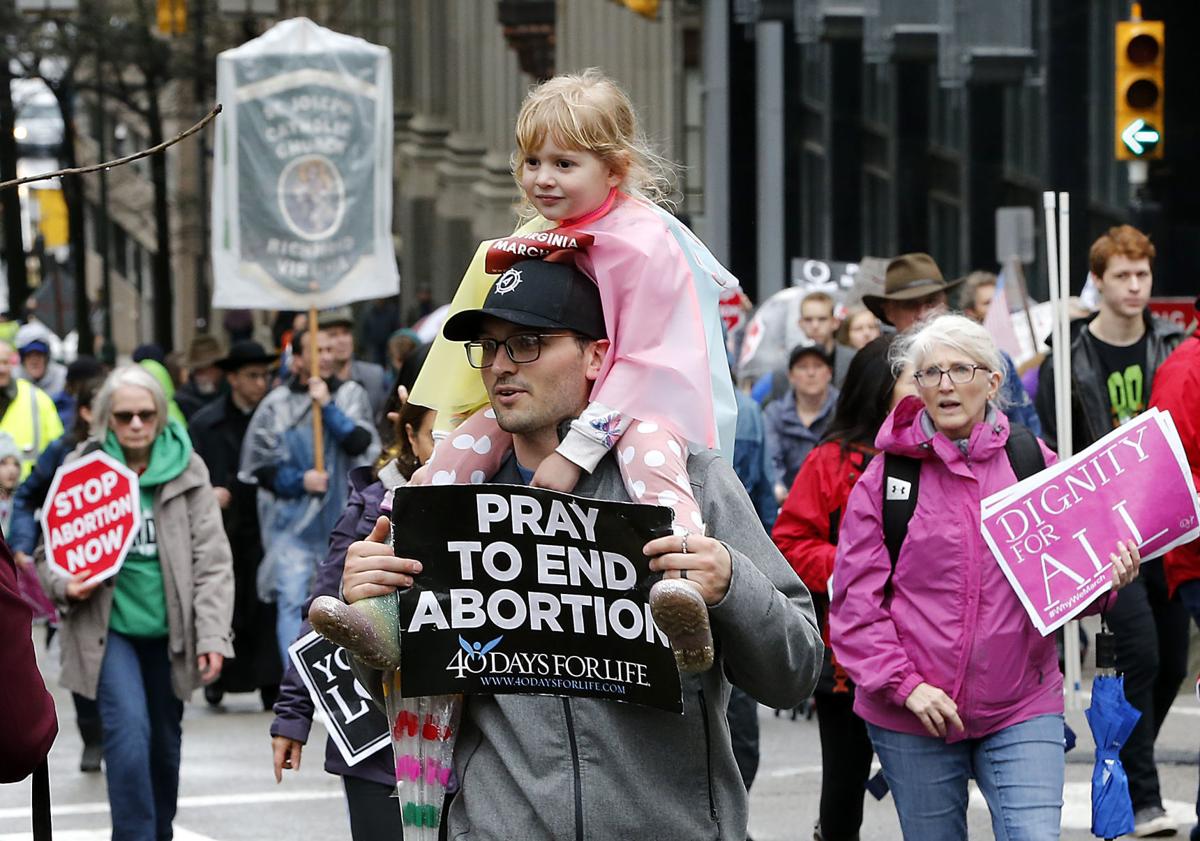 Virginia March for Life participants move down Ninth Street in Richmond, headed for the state Capitol for a rally, on Thursday. 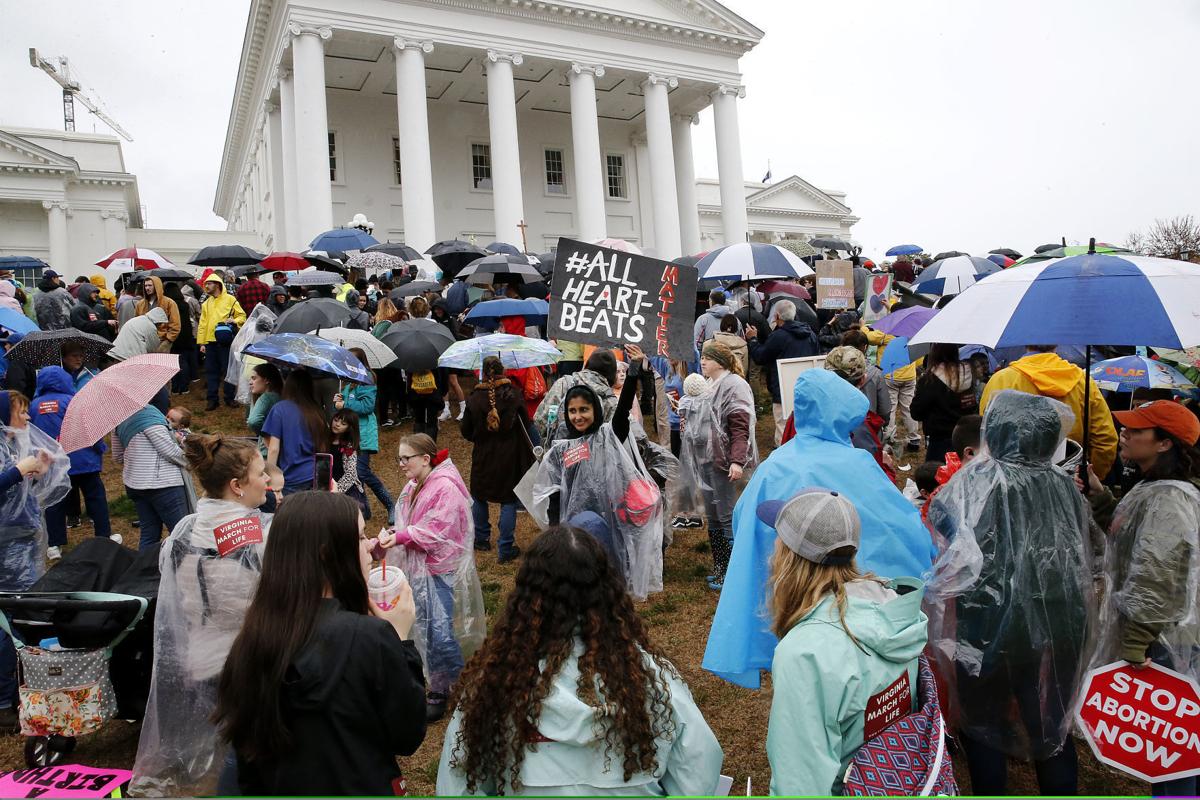 Virginia March for Life participants gather for a rally at the state Capitol on Thursday. A law enforcement source put the crowd at about 2,500 people.

Virginia March for Life participants move down Ninth Street in Richmond, headed for the state Capitol for a rally, on Thursday.

Virginia March for Life participants gather for a rally at the state Capitol on Thursday. A law enforcement source put the crowd at about 2,500 people.

RICHMOND — Bearing signs wrapped in plastic and strapped to umbrellas, a crowd of about 2,500 demonstrators arrived at the steps of a rainy Virginia Capitol on Thursday to protest abortion access legislation moving through the state legislature.

Thursday’s crowd homed in on legislation sponsored by Democrats in the legislature to draw back restrictions on abortions, including a 24-hour waiting period and mandatory ultrasounds.

“We heard last year the comments of the governor,” and “now we’ve got two bills that essentially decrease women’s health and requirements for women’s health in the name of greater abortion access. It makes no sense,” said Jeanne Mancini, president of the national March for Life.

The group organized the event in partnership with the Family Foundation, the Virginia Catholic Conference and the Virginia Society for Human Life.

Mancini pointed to HB 980, introduced by House Majority Leader Charniele Herring, D-Alexandria, which would eliminate a 24-hour waiting period, mandatory ultrasounds and a requirement to provide certain information to women before they can have an abortion.

The bill, which passed the House on Jan. 28 on a 52-45 vote, also would expand the types of medical professionals allowed to perform abortions from only physicians to include physician assistants and nurse practitioners.

In a statement, Herring said: “Medical decisions should be between a woman and her health care providers. Medical professionals know the proper protocol for each individual patient, not politicians. HB 980 accomplishes this.”

“We’ve got work to do in these few weeks ahead of us. We’ve still got some hope for some of these bad bills,” Mancini told Thursday’s crowd.

As the House and Senate convened for legislative business, the crowd heard from speakers and marched around the perimeter of the Capitol. One speaker, Victoria Cobb of the Family Foundation, said to cheers that abortion is the “human rights crisis of our day.”

Joash Cain, 7, smiled for a family photo with his yellow “LIFE” balloon wrapped around his left wrist. His mother, Julia, was behind the lens. They, along with Julia’s triplets, traveled from Fredericksburg on Thursday morning. It’s important for her to set an example, she said.

“When I was pregnant with them, I was very strongly urged to abort at least one to give two a better chance at not being disabled,” she said, pointing toward the triplets. “They have no issues. They come because they’re thankful they’re here.”

Michael Lewis, who attended the rally with his wife, Kimberly, and their children, said they regularly attend similar events as a family “to set a good example of our kids and show everyone that life matters.”

Lewis, 33, said he was born and lives with cerebral palsy. He called the legislation advancing in the legislature “extreme and out of the mainstream.”

“It’s reflective of a lack of compassion, especially the fact that they view disability as a justification for ending a child’s life. I’m disabled myself,” he said.

Larry Tyler, 72, slapped a “Virginia March for Life” sticker to the front of his Donald Trump shirt. He joined others walking down Broad Street with “Stop Abortion Now” signs.

“Hopefully, these bills get watered down or get beat,” he said. “If they don’t, then in two years, we got to come back and vote all these people out. Get conservatives back in control.”

A law enforcement source put the crowd at about 2,500 people.

As the rally and march proceeded, Del. Nick Freitas, R-Culpeper, gave a speech in the House of Delegates in which he criticized the defeat of his bill that would have required physicians to care for a child born alive as a result of a “botched abortion.”

The House Courts of Justice Committee left his bill in the panel and did not vote it out before Tuesday’s crossover deadline. A violation of the measure would have been punishable as a Class 4 felony, punishable by up to 10 years in prison.

Freitas quoted from comments Northam, a pediatric neurologist, made in a January 2019 appearance on radio station WTOP.

Northam had been asked about a defeated bill sponsored by Del. Kathy Tran, D-Fairfax, that would have loosened restrictions on third-trimester abortions. Northam said that if a nonviable or badly deformed infant survived birth, a woman and her doctor could have a “discussion” about what to do next.

Northam later stood by his comments, saying he was speaking as a doctor who has had conversations with parents in situations in which there is no hope for survival.

Del. John McGuire, R-Goochland, who, like Freitas, is seeking the GOP nomination for the U.S. House in the 7th District, said in a floor speech Thursday that he believes life begins at conception.

“We’ve undone, in just 30 days, everything that we’ve done to protect life in 20 years,” he said.

PHOTOS: Virginia March for Life at Capitol Square in Richmond