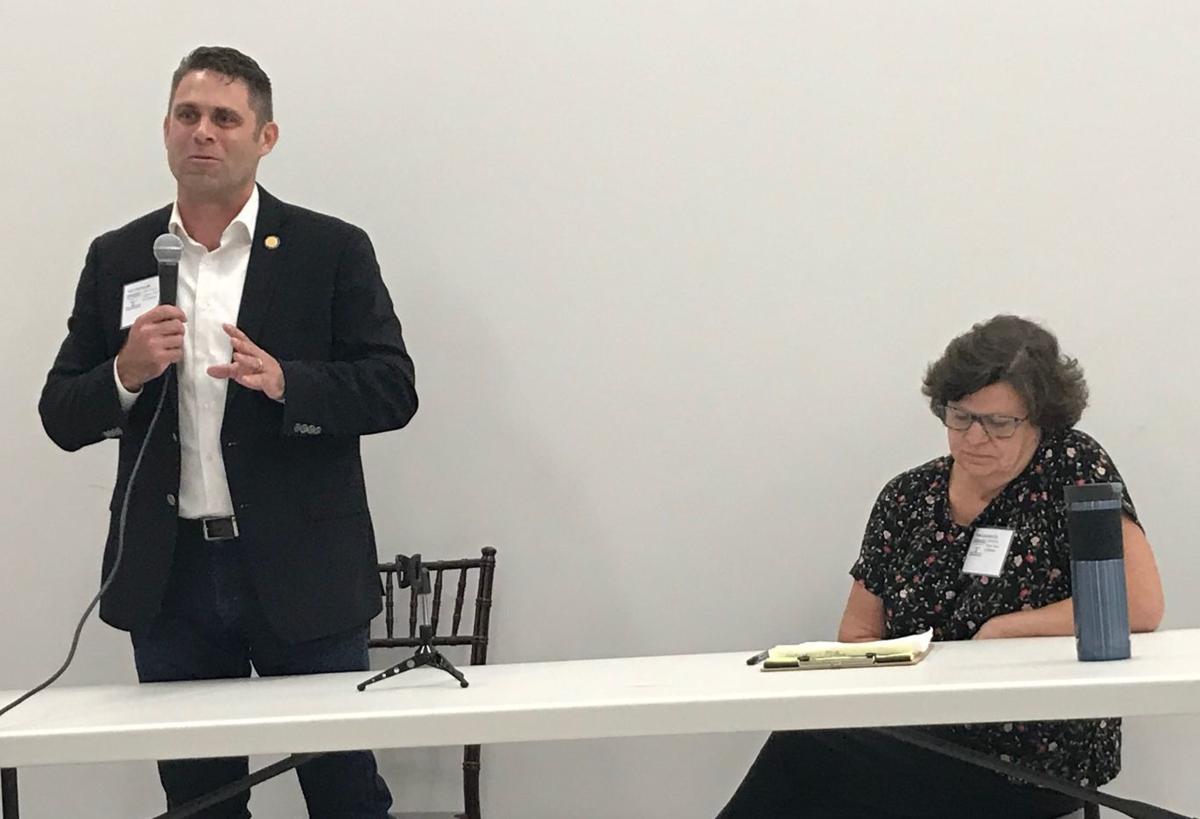 Del. Nick Freitas speaks during Monday’s candidate forum in Orange County. Seated is Democrat Ann Ridgeway, the only candidate who will be on the ballot for Freitas’ seat in November. 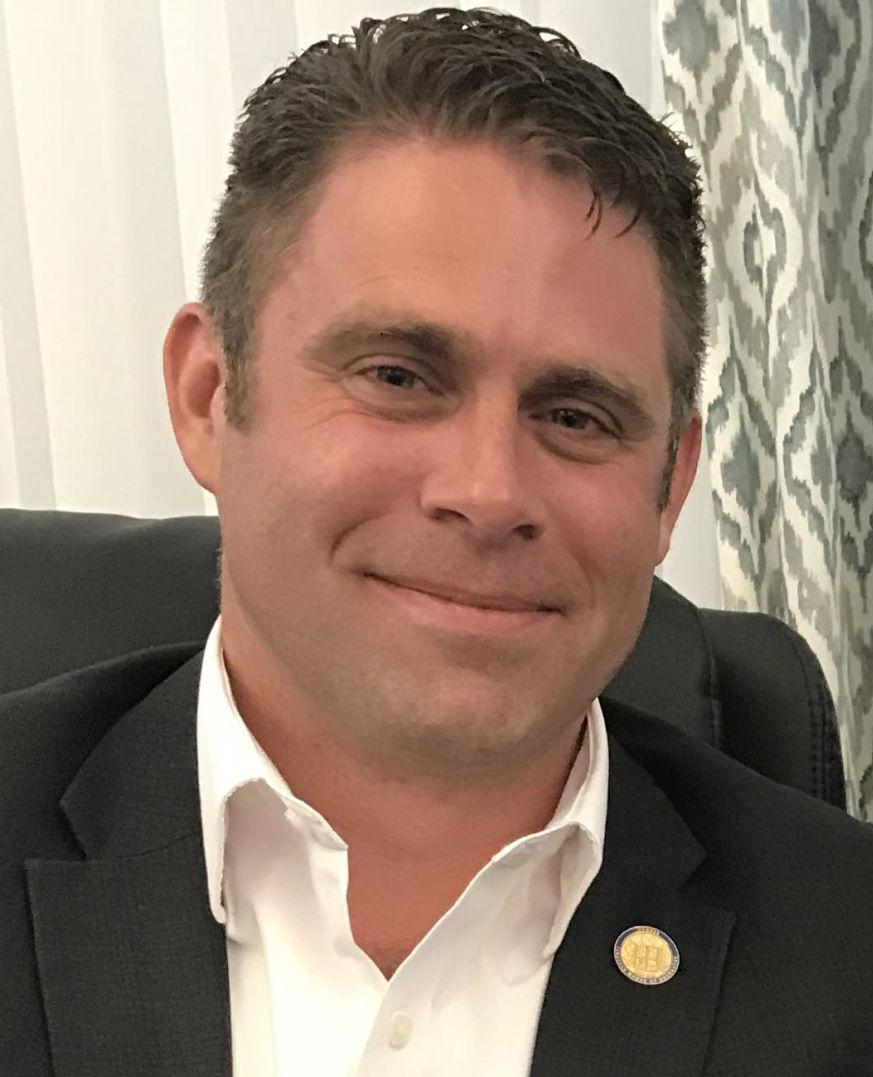 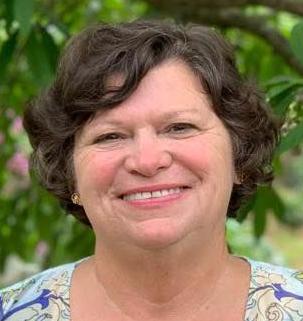 RHOADESVILLE — Amid an unusual election, Democrat Ann Ridgeway and write-in incumbent Republican Del. Nick Freitas stuck to their party lines at a candidate forum in Orange County on Monday.

Only Ridgeway will be on the ballot for the 30th District seat in the House of Delegates following a series of paperwork mishaps on Freitas’ part. The district covers Orange and Madison counties and part of Culpeper County.

Following a lengthy political drama with the State Board of Elections, Freitas announced last month that he would run as a write-in candidate, a costly plan. Nevertheless, Freitas has trudged ahead and last week reported a $500,000 campaign donation from conservative super donor and Illinois-based shipping supplies magnate Richard Uihlein.

Outside the forum Monday, Freitas staffers informed prospective voters about the write-in process. They claimed a “Democratic bias” on the Board of Elections had led to Freitas’ exclusion from the ballot.

Inside the forum, both candidates were given the opportunity to answer a variety of questions from attendees. The event, which was hosted by the Orange County Chamber of Commerce, was specifically designed not to be a debate, according to Tammy Collins, executive director of the chamber.

Instead, all candidates on the November ballot in Orange County, as well as write-in hopefuls, were asked questions. There was no opportunity for rebuttal.

Gun control proved to be the hottest issue of the night, drawing multiple questions and the strongest reactions from the several dozen gathered in Lafayette Station in Rhoadesville.

Freitas, a well-known supporter of the Second Amendment, argued that the Founding Fathers did not intend the law to be for gun-collecting and hunting, but rather as an acknowledgement that citizens have the right to defend themselves.

In his view, some Democratic members of the General Assembly have expressed support of disarming Americans.

“Every time the government takes measures to try and disarm law-abiding citizens, I’m going to have a problem with that,” he said.

Ridgeway focused much of her response on the inclusion of the words “well regulated” in the Second Amendment, arguing that they imply an openness for changing the way guns are sold. Namely, she advocated for “common sense” gun control, such as a banning people who are on the federal no-fly list from being able to purchase firearms.

As a gun owner, she said she did not support taking away peoples’ firearms.

“[Well-regulated] means we need to do something about the issues that are going on in our country,” she said. “It happened down in Virginia Beach, right next door. It’s not someplace else anymore.”

Freitas took issue with Ridgeway’s endorsement of the no-fly ban, describing it as overbroad and unconstitutional, as well as with her interpretation of “well-regulated.”

Another focal topic of the forum was raising the minimum wage, which is $7.25 an hour.

Freitas presented a hypothetical in which an unemployed person was hired at $7 an hour by a “mom and pop shop” to stock the shelves. In that situation, the employers would be criminals in the government’s eyes, he said.

“The people who hurt the most when you raise the minimum wage to $15 an hour are all the people who end up losing their jobs and are not able to get a job now because the government thinks it knows best in respect to what you should make,” Freitas said.

Ridgeway began her answer by asking the crowd to raise their hands if they are paid minimum wage or if they think they could raise a family on minimum wage. No hands were raised.

“We need to work on raising the minimum wage gradually because we need to have a living wage for people so that they can have a family and they don’t have to work three, or four or five jobs,” she said.

The candidates got in a bit of a tiff over the General Assembly’s failure to pass Equal Rights Amendment legislation last year.

Freitas took issue with the way the vote had unfolded and presented a hypothetical in which the writing of the ERA could prevent a female veteran from using the G.I. bill to attend an all-female college.

Ridgeway expressed her support for the ERA, directly addressing Freitas and asking him if he believed women should have equal rights. After a short back and forth, Ridgeway was stopped by the event’s moderator, who informed her she was required to direct her answers to the audience.

Also participating in the forum was Amy Laufer, a former member of the Charlottesville School Board who is running to unseat Bryce Reeves, R-Spotsylvania, in the 17th District of the Virginia Senate. Reeves was not present at the forum. The 17th Senate District covers part of Albemarle, Culpeper, Spotsylvania and Louisa counties and all of Orange County and Fredericksburg.

All seats in Virginia’s General Assembly are up for election Nov. 5.

Election Day is on Nov. 5, and there are many elections slated for our area.