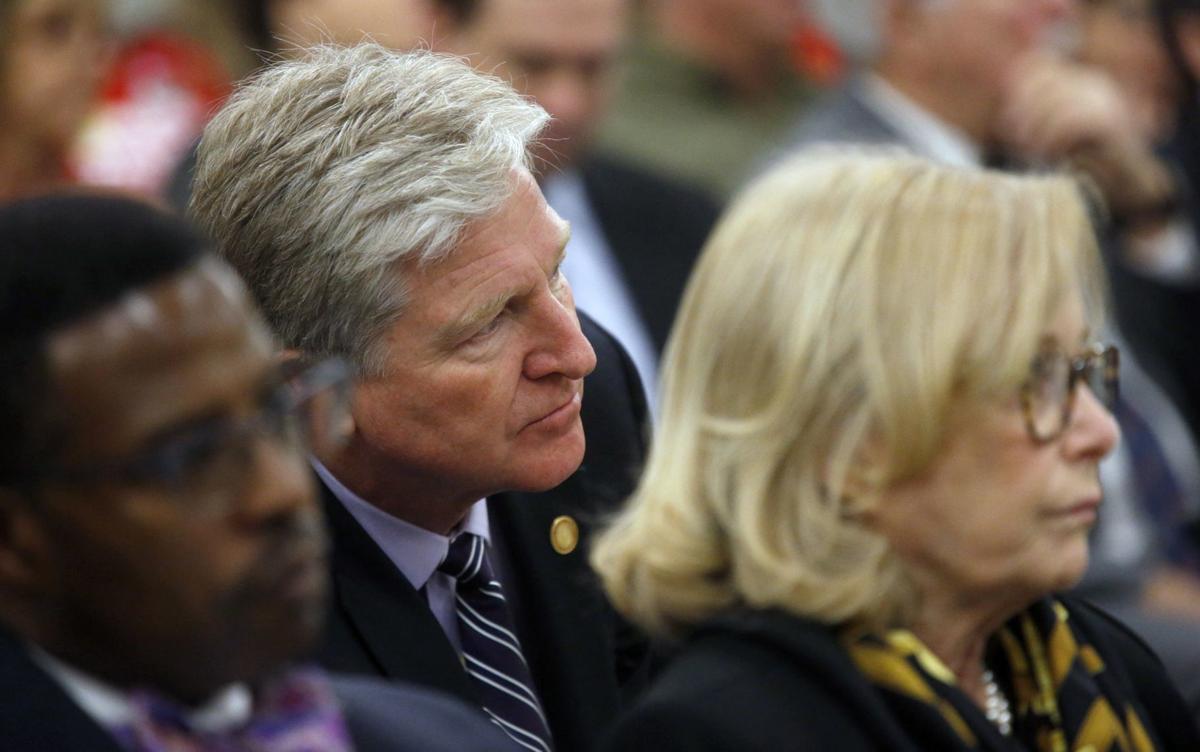 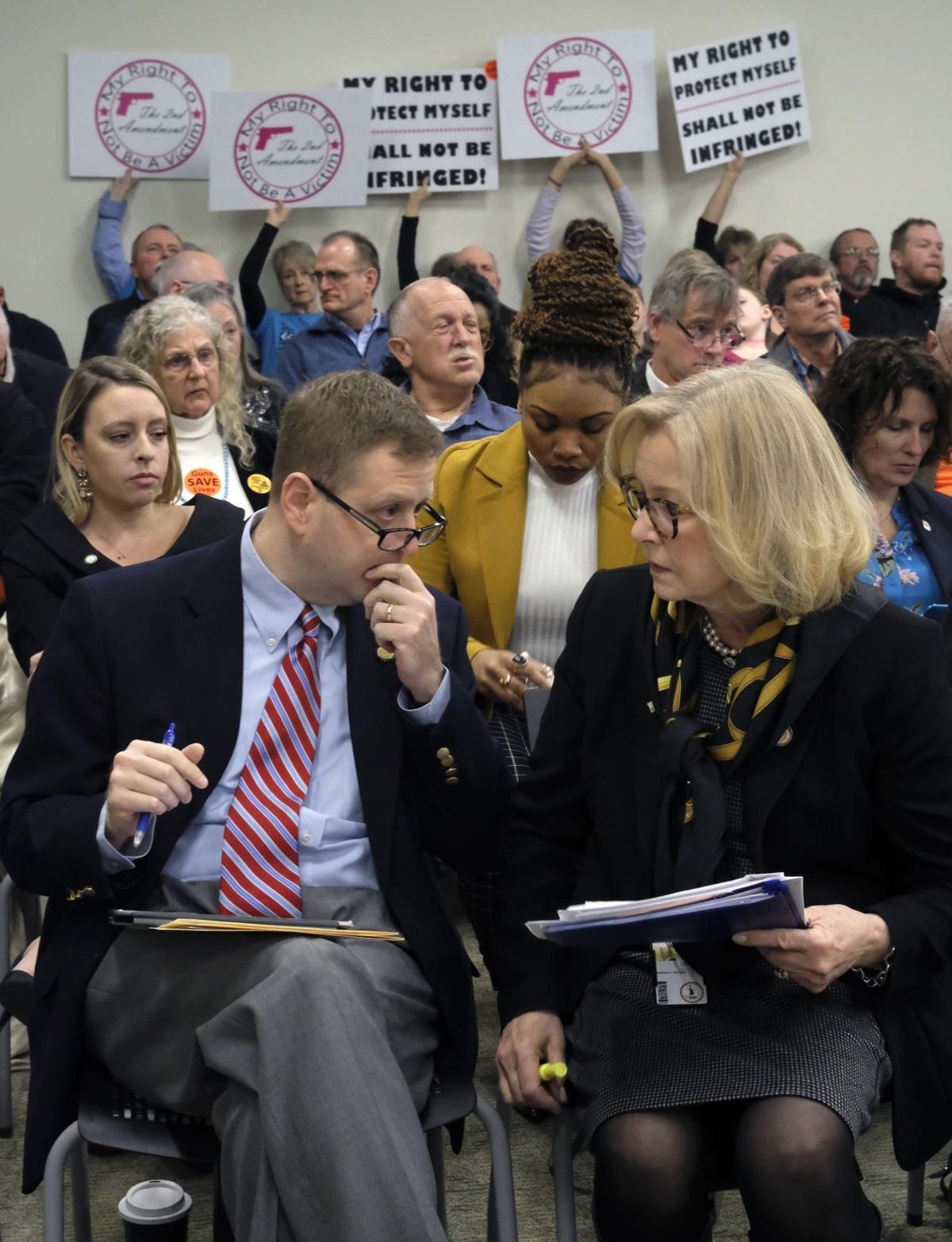 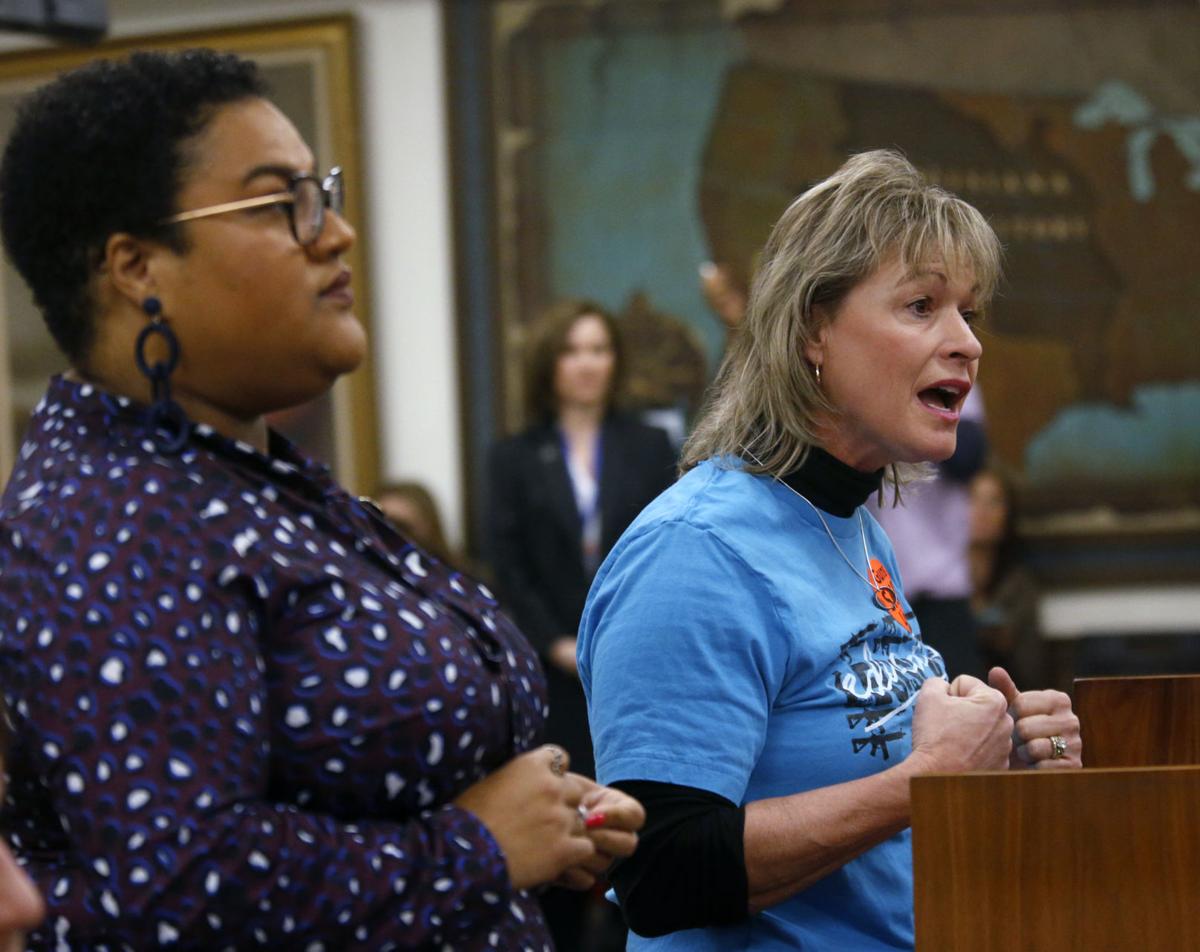 Candy Eubank (right), from Doswell, speaks in opposition to HB421, which would turn authority to regulate weapons and ammunition over to localities. The bill was presented by Del. Cia Price (left), D-Newport News, during a meeting of the Senate Judiciary Committee on Monday in Richmond.

Candy Eubank (right), from Doswell, speaks in opposition to HB421, which would turn authority to regulate weapons and ammunition over to localities. The bill was presented by Del. Cia Price (left), D-Newport News, during a meeting of the Senate Judiciary Committee on Monday in Richmond.

RICHMOND — With two weeks left in the General Assembly session, the House of Delegates and Senate are hashing out the details of several gun control bills.

Democrats are on the verge of fulfilling a top campaign promise to deliver gun control, an issue that has dominated this legislative session. Both chambers say they’ve reached agreement on a few bills, notably a measure known as a “red flag” bill, but they still are working on hammering out the specifics in others, such as expanding background checks.

One of the most complicated proposals has been to allow courts to temporarily ban people from possessing firearms if there are clear signs that they pose a danger to themselves or others. The House and Senate have both tweaked their bills so they match.

The legislation that’s headed to the floor of both chambers for a final vote addresses the concerns of senators who wanted to make sure there was enough due process built in for someone who could be subject to an emergency substantial risk order.

The Senate, which has a few moderate gun-friendly Democrats, has been the more challenging chamber for gun control bills to pass through. With a narrow 21-19 majority in the Senate, Democrats can’t afford to have more than one party member break ranks. In the event of a tie, Lt. Gov. Justin Fairfax, a Democrat, would vote on the bill.

The House and Senate have also agreed to legislation that would require in-person training to obtain a concealed handgun permit. Currently, people can take online courses, which aren’t standardized.

Legislation to allow localities to ban weapons from certain buildings and events also appears poised to pass both chambers.

Senate Minority Leader Tommy Norment, R-James City, said he worried that local government meetings to discuss gun bans would become “intense,” like the meetings that have played out in the General Assembly this session. Sen. Scott Surovell, D-Fairfax, said he expected only a handful of localities would actually take advantage of this local authority.

“There’s a lot of localities that have already said their point of view about this when they passed their Second Amendment sanctuary resolutions,” Surovell said.

A woman told the Senate Judiciary Committee that the government is trying to make law-abiding gun owners into criminals.

“There are a lot of people on the right side who think you are the bad guy,” Sen. Mark Obenshain, R-Rockingham, said of the gun control supporters in the room.

The two chambers had competing ideas for background check legislation. The House backed a bill that would require checks for all firearm sales and transfers, while the Senate wouldn’t have checks apply to transfers.

Del. Ken Plum, D-Fairfax, the patron of the House bill, told the Senate Judiciary Committee he wants more time for legislators to work on the measure.

“I’ve heard the concerns many have expressed, and I recognize those concerns, but there are some remedies for that,” Plum said.

Legislators also must agree on a bill to cap handgun purchases to one a month. The Senate favored a bill to create an exemption for concealed handgun permit holders, but the House did not include that in its proposal.

The Senate also has another chance at voting on a bill to require people to report lost or stolen firearms within 24 hours of learning their guns are missing. The Senate bill failed on the floor 21-19, but gun control advocates are hopeful that a Democrat will flip this time on a floor vote on the House version.

Two Democratic senators have also come around on voting to update a law that deals with adults who recklessly allow loaded firearms to fall into the hands of children younger than 14. The offense currently is a Class 3 misdemeanor.

Sens. Creigh Deeds of Bath and Chap Petersen of Fairfax City voted down a bill earlier this month that would have raised the age to 18 and made it a Class 1 misdemeanor.

Del. Cliff Hayes Jr., D-Chesapeake, changed his bill to keep the age the same but upgrade the charge to a Class 1 misdemeanor. The changes secured the support of Deeds and Petersen.

Sen. Ben Chafin, R-Russell, said the bill does not respect the cultural differences between rural and suburban and urban Virginia. He said the proposal infringes on how parents handle firearms with their children.

Democratic senators argued it’s already illegal to allow children under 12 to use a firearm and to recklessly leave a firearm with a minor.