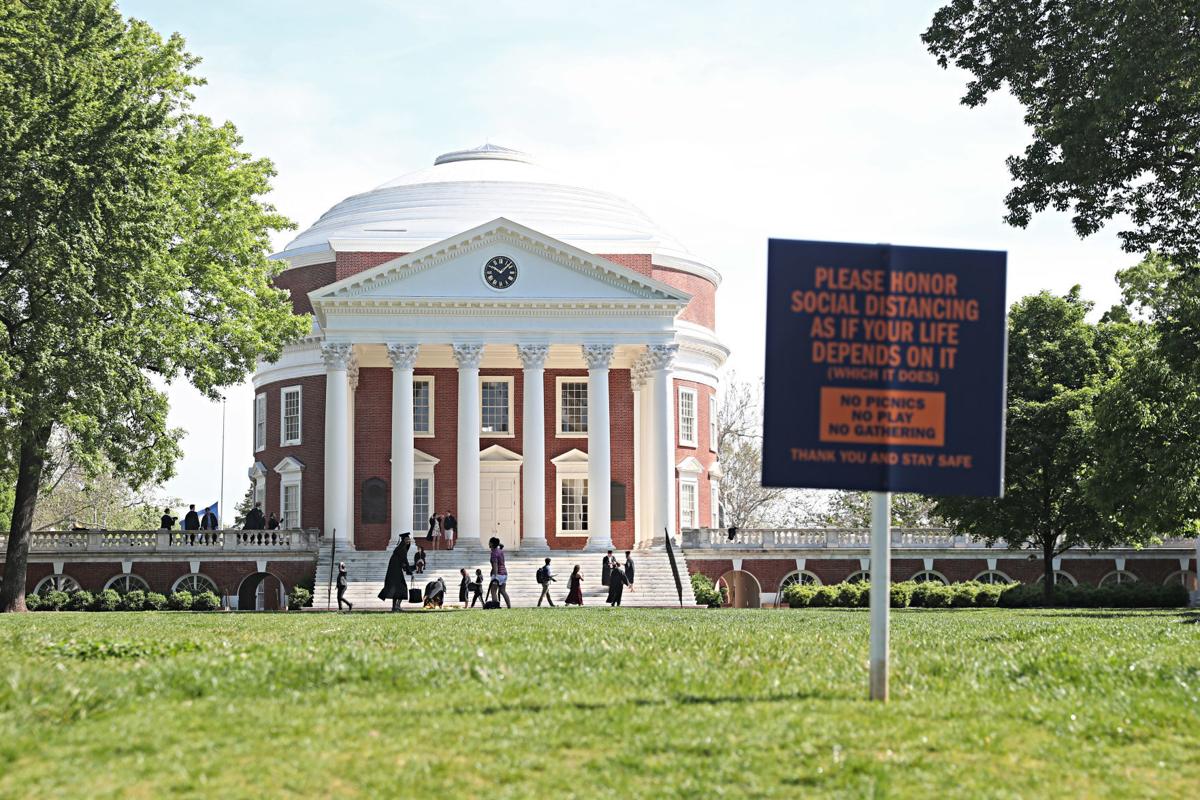 ERIN EDGERTON/THE DAILY PROGRESS Graduates gather at The Rotunda for ceremonious photos and toasts Saturday, as the university celebrated a virtual graduation for the Class of 2020. Most appeared to comply with social distancing guidelines. 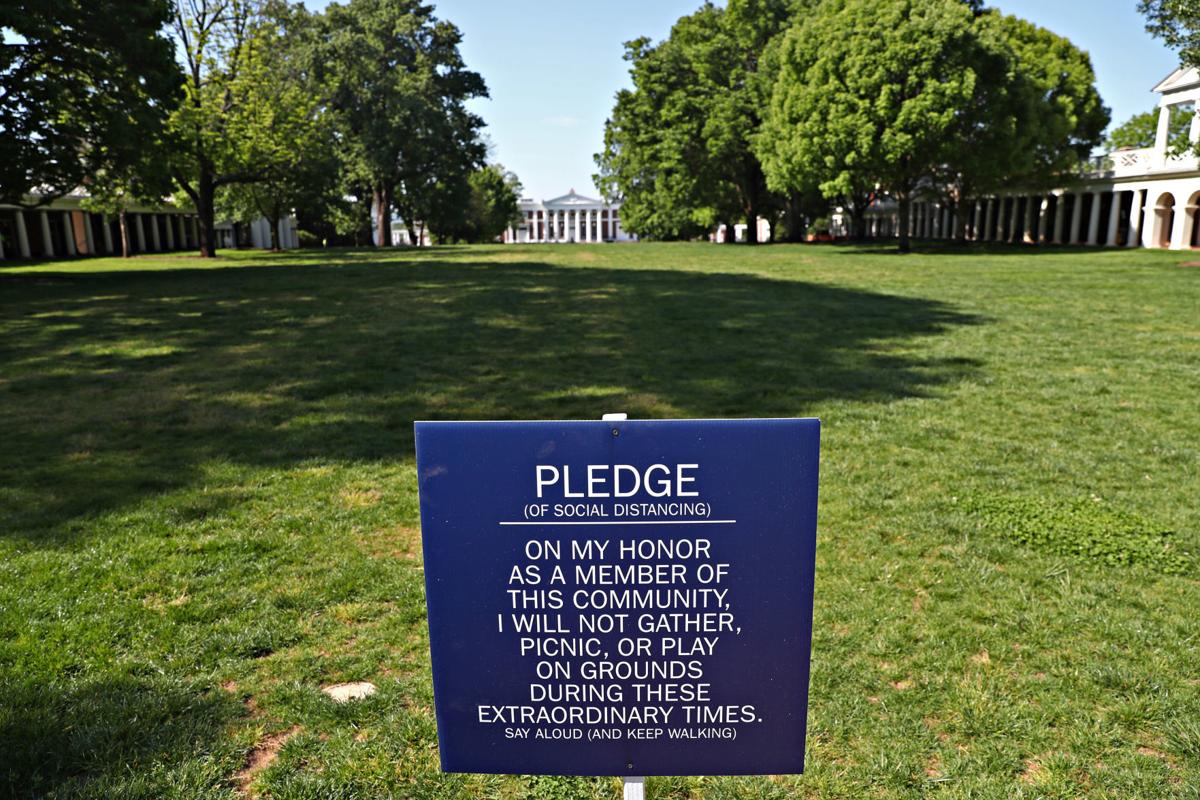 Extra signs displaying University of Virginia's honor code are hammered into the Lawn before UVa's virtual 2020 graduation in May. 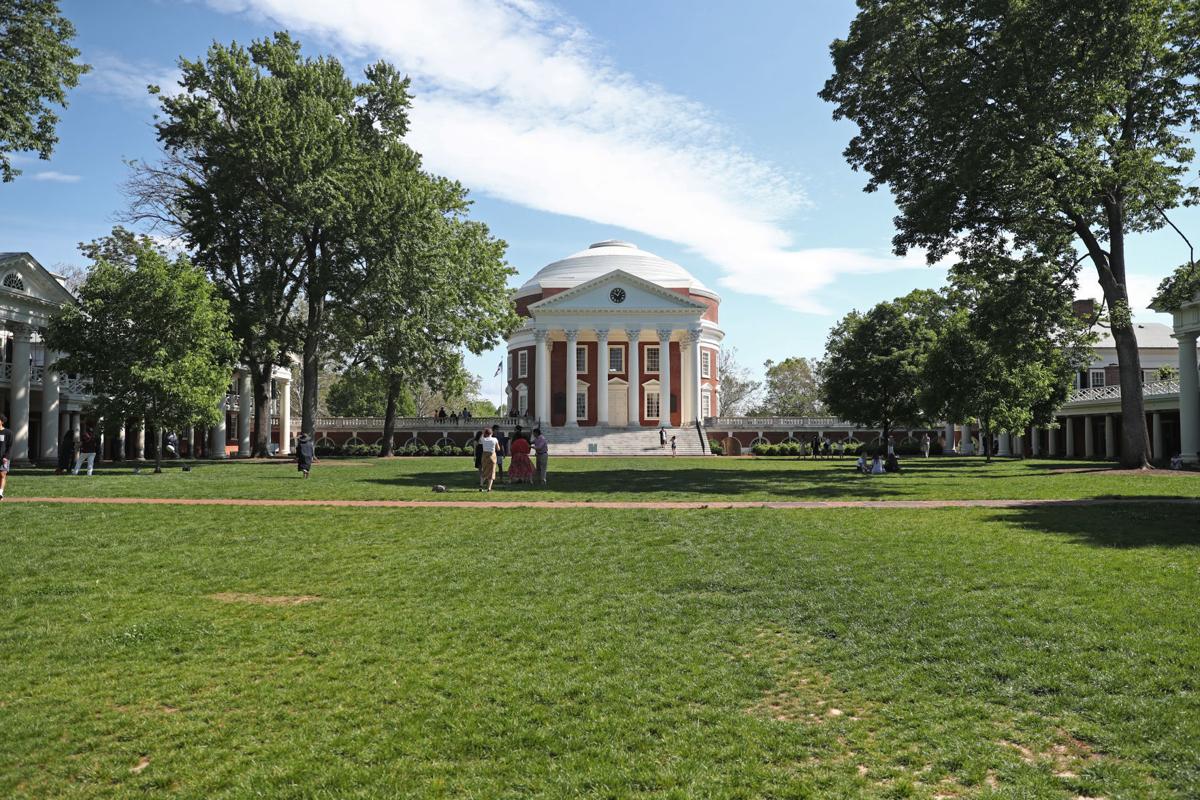 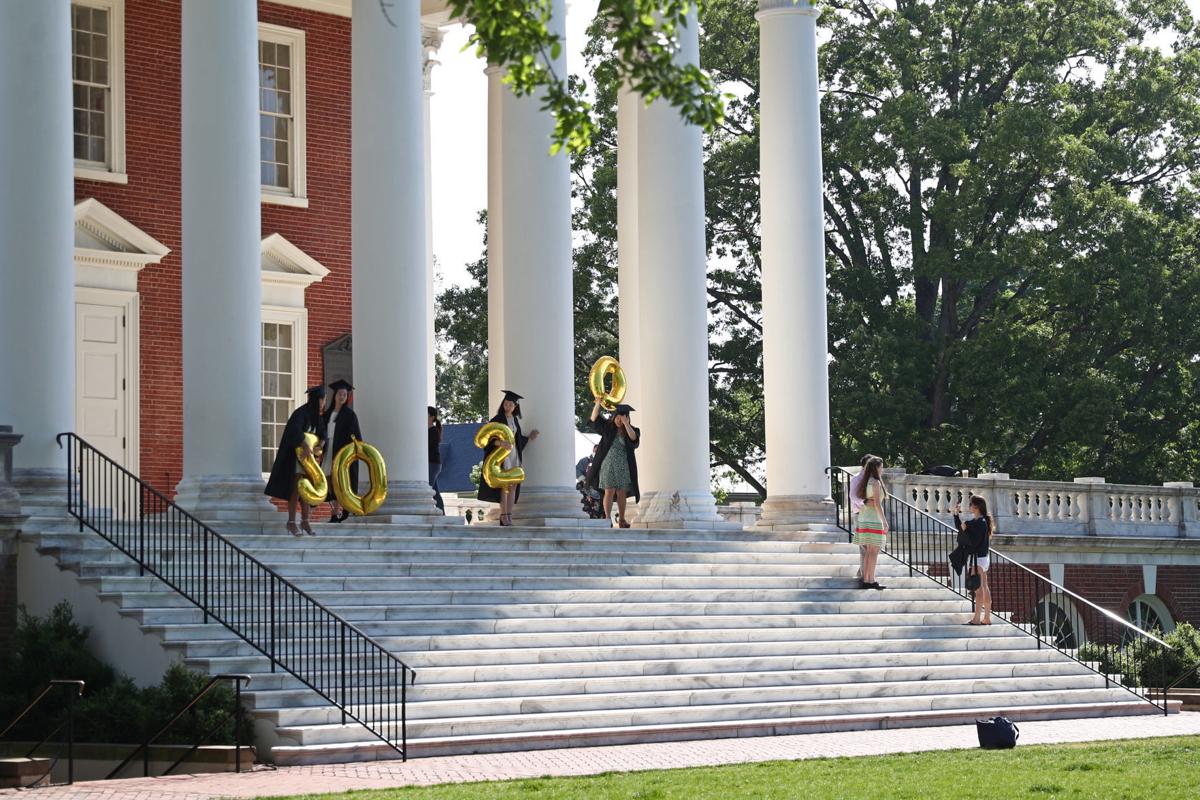 ERIN EDGERTON/THE DAILY PROGRESS University of Virginia 2020 graduates takes photos the day before their virtual graduation Friday on the steps of the Rotunda. 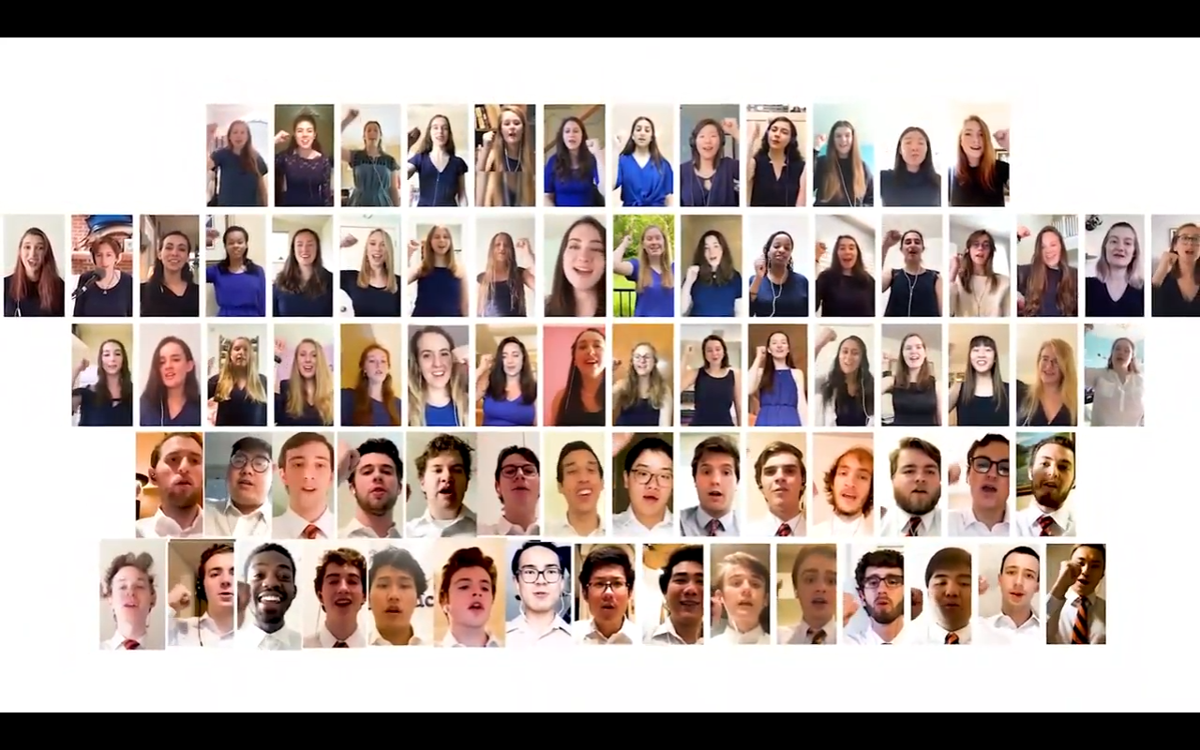 University of Virginia students sing “Pompeii” by Bastille during a virtual graduation on Saturday. 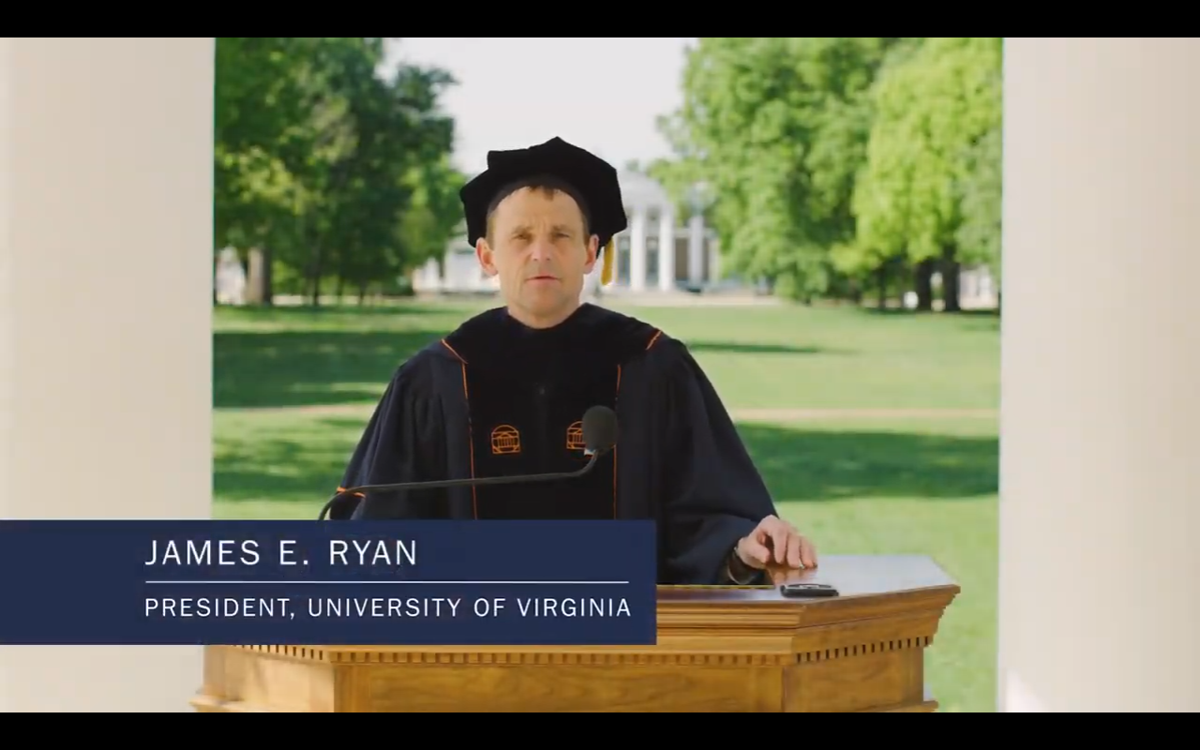 ERIN EDGERTON/THE DAILY PROGRESS Graduates gather at The Rotunda for ceremonious photos and toasts Saturday, as the university celebrated a virtual graduation for the Class of 2020. Most appeared to comply with social distancing guidelines.

ERIN EDGERTON/THE DAILY PROGRESS University of Virginia 2020 graduates takes photos the day before their virtual graduation Friday on the steps of the Rotunda.

Everyone could admit – this weekend was a little weird in Charlottesville.

Saturday was supposed to be one full of students, family and friends crowded onto the University of Virginia’s Lawn to celebrate accomplishments of four years or more.

But instead, thousands flocked to different venues spread across the country and world. More than 9,000 viewers crowded around screens in their homes and for a chance to celebrate and ignore the elephant in the room — the coronavirus pandemic.

“We didn’t invite the elephant,” Larry J. Sabato, director of UVa’s Center for Politics, said in an online ceremony before the virtual commencement. “We didn’t want the elephant. But the elephant came anyway. … You aren’t getting today what you manifestly deserve.”

UVa sent students home earlier this year. As the pandemic continued, it became clear that Final Exercises weren’t going to be the same.

The university placed signs around the Lawn and Grounds instructing students “on their honor” to avoid congregating in groups of more than 10. Despite scattered social media posts about graduates gathering to take photos, most seemed to comply.

Typically, thousands of people gather on the Lawn to cheer graduates processing from the Rotunda.

Instead, the university planned a virtual ceremony to hand out more than 7,000 degrees and celebrate the graduating class. An in-person ceremony is expected in the fall.

“This is clearly not our typical ceremony, nor is it the one we hoped to have,” President Jim Ryan said in the video.

Saturday’s ceremony kicked off with a video of a solitary graduate walking through the city and Grounds followed by a video reviewing the highlights of the year.

“It was pretty bittersweet because you see all these places I recognized and spent so much time in,” Gracie Kreth, an English and Media Studies double major, said in a phone interview after watching the ceremony from her home in Little Rock, Arkansas, with family. “It wasn’t a complete goodbye, but it was good.”

Ryan, speaking in a recorded video from the Rotunda, noted that the graduates experienced some of the biggest moments in the history of the university and Charlottesville.

The Class of 2020 experienced the aftermath of controversy about a retracted Rolling Stone article about campus rape culture, the deadly 2017 Unite the Right rally and, now, the coronavirus pandemic. It experienced the men’s basketball team going down in infamy as the first No. 1 seed to lose in the first round of the NCAA Tournament, only to come back the next year and win it all.

Ryan said that the pandemic will lead to a new appreciation of life and loved ones.

“Deprivation has a way of making you focus on what’s important,” he said.

One of the first thoughts on Kreth’s mind as she watched were about afternoons sitting on the Lawn with friends in the spring.

Kreth stayed in Charlottesville about a week after classes went online before packing up her apartment for the drive back to Arkansas.

“It was a quickened closing chapter of my life,” she said. “I try to look at it not so much as I got robbed, but I had so many great experiences and the reason I’m sad is I liked it so much.”

The ceremony featured a video of students singing and playing instruments for “Pompeii” by Bastille from their homes and outdoors.

U.S. Sen. Mark R. Warner, D-Va., joined the Center for Politics at the pre-commencement ceremony. He told graduates that they might not succeed at first, particularly with a pandemic creating havoc on the job market, but to keep trying.

“I had to learn first through failure,” he said. “Try to stretch yourself and if you fail, as long as you pick yourself up from that failure and move on, I think most people you find will say their biggest lessons came from failure.”

Sabato told graduates that although they couldn’t celebrate in the way they wanted, they should still be proud.

“You should savor the moment, even under these unusual circumstances,” he said.

The ceremony also included performances from classical musician Yo-Yo Ma and Dave Matthews, who gave the graduates a short message of encouragement before playing his new song “Singing From The Windows.”

Keeping it short and sweet, Matthews saluted the graduates and told them to “Make the world a better place, as you would see fit.”