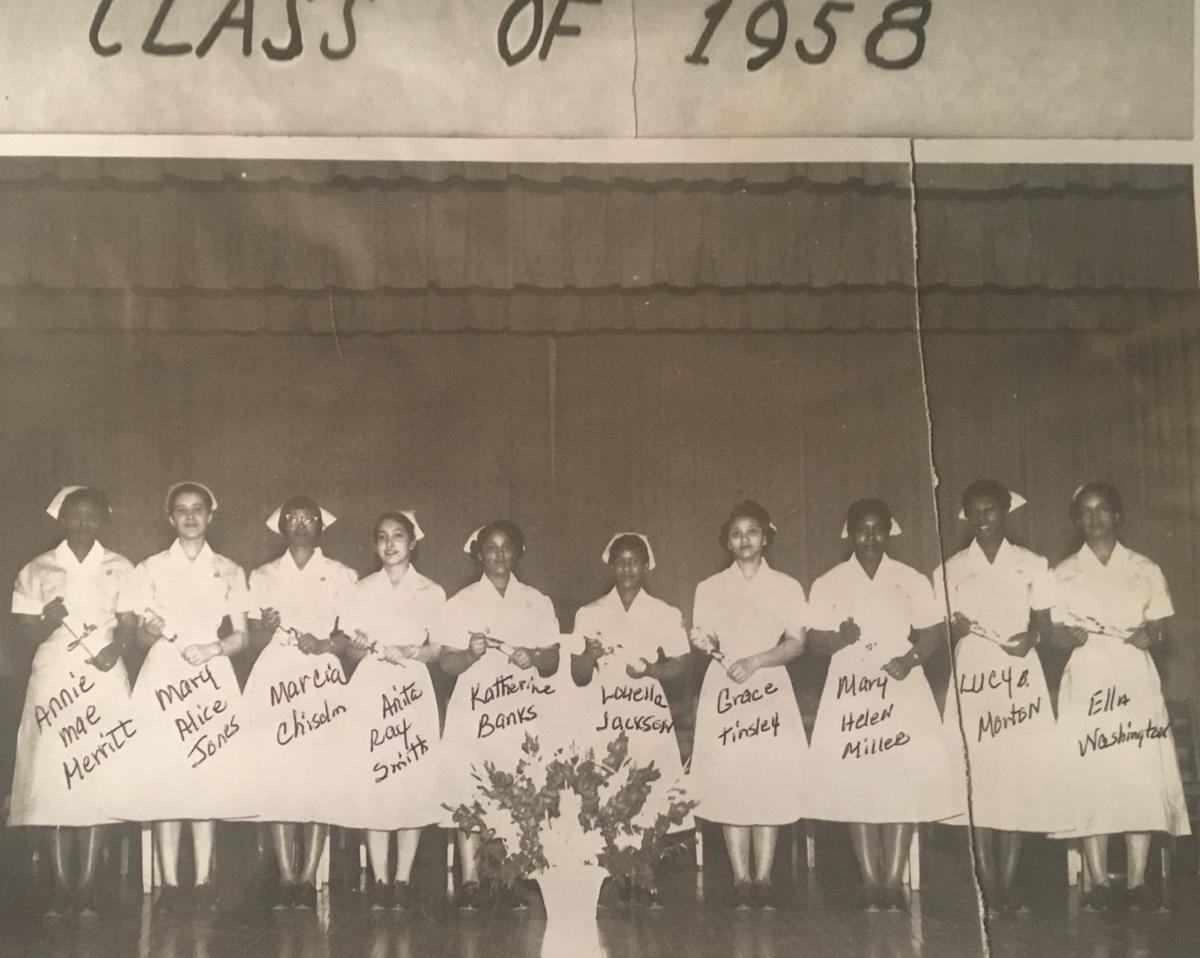 LouElla Jackson (center), now LouElla Walker, graduated from the University of Virginia and Jackson P. Burley High School’s nurse diploma program in 1958. The program was one of a few ways in the state for black women to become credentialed nurses before four-year degree programs were desegregated.

When LouElla Walker was in 11th grade, the head of the University of Virginia nursing school visited Burley High School and asked the African-American students present to consider becoming nurses.

Walker, who had thought her options after high school were limited to nannying, cooking or cleaning, was interested. She went home to rural Albemarle County and asked her mother to help her fill out an application to begin the program in the fall of 1957.

“I told her that I did not want to spend the rest of my life in someone’s kitchen,” Walker, now 81, said of deciding to embark on what would end up being a 50-year career in nursing. “I knew my family couldn’t send me to college, and I thought this was a good way to have a job and a profession.”

At the time, the UVa School of Nursing, like most educational outlets in Virginia, was segregated, and there were few avenues for African-Americans to become nurses. One way, though, was the joint program between Burley and UVa that allowed about 100 African-American women — and a few men — to become credentialed in the days before schools and hospitals were fully integrated.

The nurses were never allowed inside UVa’s nursing school and were never acknowledged as UVa alumni. Now, a UVa research project is trying to find “hidden nurses,” like Walker, and give them proper recognition.

“There is a reason, a time and a season for everything,” said Walker, who has helped to contact fellow graduates and invite them to an April celebration at UVa. “It’s about time.”

The history of black female nurses and nursing students does not start with credentialing; it stretches back to slavery and beyond, according to UVa historians and students working on the project.

“Black women and black female nurses were central figures in establishing the American health care infrastructure,” said Tori Tucker, a doctoral student at UVa who has studied nursing history since interviewing Mavis Claytor in 2015. Claytor, who graduated from UVa in 1970, was the first black student to attend UVa’s nursing school.

Tucker has since interviewed pioneering African-American nurses across the state, some of whom attended segregated or racially quota-restricted diploma programs and some of whom received four-year  and graduate degrees during desegregation.

When they began studying and working, many entered classrooms, wards and clinics as the only black nurse or one of few black nurses present. They were often given the hardest and most challenging work in the hospital.

“These nurses are at the intersection of what it meant to be black and to be a woman in Virginia,” Tucker said.

Burley’s program was developed to fight a shortage of qualified nurses after World War II, according to Barbra Mann Wall, a professor of nursing at UVa and director of the Eleanor Crowder Bjoring Center for Nursing Historical Inquiry. In the 1950s, UVa only accepted and trained white nurses, but the UVa Hospital needed both black and white nurses to staff its segregated wards.

Roy Carpenter Beazley, director of what was then known as the Department of Nursing, proposed the Burley program, modeled after successful programs in Richmond, Roanoke and Norfolk.

Burley’s 13-month program, which ran roughly from 1952 to 1966, quickly taught recent high school graduates the basics of nursing. Students took classes during their senior year of high school and then completed practical training at UVa Hospital. The graduates were some of the first black nurses at the hospital, working first in segregated wards in the dank basement, and eventually caring for white patients, as well.

“This was a great opportunity; they knew they were not going to be able to go to college, and they used their work as nurses as a source of pride and a means of identity,” Wall said. “But they sensed the exclusion, too.”

In 1960, after a lawsuit from African-American employees demanded desegregation and better working conditions, the hospital slowly began to integrate. Walker and other nurses helped to slowly mix the black and white patients, often enduring abuse from people who did not want to be in an integrated ward or room.

“So we would say, OK, not today, and move someone else,” Walker said. “It was a process.”

The Burley program eventually closed because it was no longer needed in a desegregated environment, Wall suggested. By then, black students could enroll in UVa’s four-year degree program.

“By [1966], they should have been eligible to get into the School of Nursing, but it was still problematic,” she said. “And an LPN from Roanoke, Mavis Claytor, did enroll. Thereafter, there were clusters of African-American students in the [registered nurse] program.”

As UVa gradually became integrated and coeducational, the photos and stories of the first licensed practical nursing students faded. Archivists simply hadn’t documented their presence extensively, or they had filed the relevant documents away instead of placing them in display boxes or books.

Wall said she started looking at the archives and realized the nursing school’s official history and nearly all displayed artifacts featured white women. Stories and photos of the black nursing students sometimes cropped up, Wall said, but researchers knew there were many more students who were not visible.

“They’re invisible, but they’re not gone. They were there, just not written about,” she said. “We started looking at our own archives and they’re all white, except for these LPNs.”

Wall and Tucker decided to embark on a project, supported by The Jefferson Trust, to diversify the archives and celebrate Burley’s LPN graduates.

“If we really want to improve health and our practice, history needs to be a part of our profession,” said Tucker, whose dissertation work focuses on the history of black nurses and nursing students in Virginia from the 1950s to 1980s. “We want to ensure these nurses are not forgotten. These are our mentors, our heroes, our community members, and we have a duty to ensure that we remember them and honor them.”

The school will hold a graduation ceremony for the LPN students who were never allowed to walk through the doors of the nursing school at 1:30 p.m. April 6 at UVa’s McLeod Hall auditorium. Researchers will conduct interviews to gather oral histories of former students and preserve their memories. Wall said she hopes to eventually display their photos and documents prominently around the school.

“It’s not just about a black face on the wall; it’s about diversifying faces around where our students walk and see, and it’s about adding in black, Hispanic, LGBT and men in nursing,” she said. “We’ve only had a partial history. It’s incomplete. There are stories we still need to get.”

Walker worked as an LPN at UVa for 50 years, meeting her husband and many of her friends while working there, she said. She depended on a love of people and her faith to carry her through tough days. She retired in 2010 from a position at the Emily Couric Cancer Center.

In the past few months, Walker has called many of her fellow graduates — she estimates roughly 30 of them — and told them about UVa’s project and upcoming ceremony. She said she hopes those who are elderly or ill will be able to make it to the event. There’s a lot to talk about. There’s a lot UVa needs to hear about, she said.

“With all this mess in Charlottesville, there couldn’t be a better time to do it,” she said. “There have always been good things here, but we miss them when we just focus on the bad. Blacks have played a beautiful role at UVa, going on back more than 50 years. This is the time to recognize it.”

UVa archives are incomplete and researchers are still working to identify, find and contact graduates of Burley's program. Do you know a graduate of Burley's program or a family member of a graduate that researchers should contact? Names of graduates and/or family members of the deceased can be emailed to Tori Tucker at vnt2r@virginia.edu. Please include your name in the message with the graduates’ name, address and phone number if applicable.

All are welcome to a community program on Saturday April 6 at 1:30 p.m. for a community program honoring the graduates of Burley’s Licensed Practical Nursing Program in the UVa School of Nursing’s McLeod Auditorium. The program is open to the public. Graduates and family members of graduates may also RSVP for a luncheon by contacting Tori Tucker or UVa's Nursing History Center at at ‭(434) 924-0083.

Interested in sharing your narrative? Researchers will begin gathering oral histories from Black Nurses that studied, applied, and/or worked in Virginia between 1950 and the 1980s on April 5. Email Tori Tucker or call UVa's Nursing History Center at ‭(434) 924-0083‬ to learn more details.

Ruth Serven Smith is a reporter for The Daily Progress. Contact her at (434) 978-7254, rserven@dailyprogress.com or @RuthServen on Twitter.

The Albemarle-Charlottesville Branch of the NAACP applauds reporter Ruth Serven Smith for the story on the “Hidden Nurses” (March 9) in The Daily Progress. These exceptional women were determined to serve the community even while enduring the most egregious segregational policies.

At the event, researchers will gather oral histories of black students who studied at, applied to or worked at UVa and its hospital between the 1950s and 1980s.