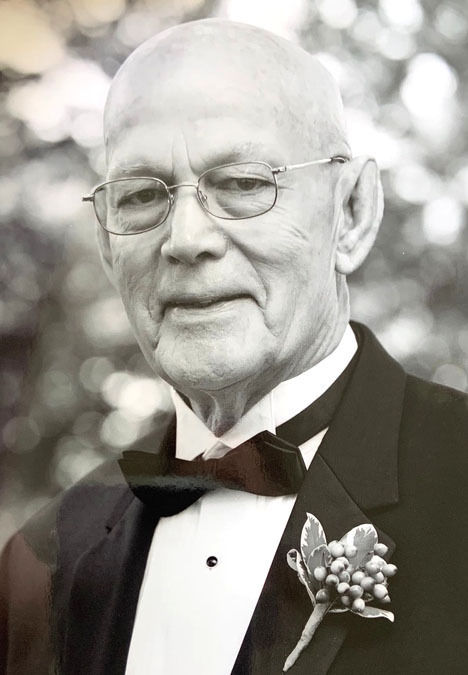 November 22, 1932 - June 22, 2020 James Preston Smith, beloved husband, father, grandfather, and friend died at home on Monday, June 22, 2020, with his family at his bedside. He was preceded in death by his beloved wife of 63 years, Genevieve; his parents, Miles A. and Elois Markham Smith; his sister, Eloise Mordan; and grandchildren, Gina Gordon, Wyatt Jenkins, and Joshua Housdan. He is survived by his five daughters, Jeanne Dailey of Albuquerque, N.M., Stephanie Housdan (Dennis), Catherine Smith, Trisha Gordon, and Jaymee Jenkins (Joe) all of Charlottesville. He leaves seven beloved grandchildren, Lori Marshall (Chris), Ginger Graham (Greg), Kara Housdan, Katie Blackwell (Hunter), Emily Gordon (Loren Mendoza), Joe Jenkins (Carolyn), and Trenton Jenkins; and ten great-grandchildren, Jack and Alex Marshall, Winston and Maren Graham, Lily Housdan, Roman and Paxton Blackwell, and Miles, Hannah and Leah Jenkins. Born November 22, 1932 in Buchanan, Virginia, Jim graduated from Pulaski High School and soon moved to West Virginia with his parents. It was there he met the love of his life, Genevieve. After a brief courtship, they married in 1951. Entering the Army as a draftee in 1953, he decided to make a career in the military rising to the rank of Lieutenant Colonel before retiring in 1973. While in the Army, Jim earned his BS degree in Business Administration from Mary Hardin Baylor College in 1968. A trailblazer, he was the first male graduate from what had been a college for women. Jim served two tours of duty in Vietnam, first in 1963-64 as an advisor and again in 1970-71. The Lord protected him, returning him safely to his family both times. After retiring from the military, Jim began a second career at the University of Virginia serving as Associate Director for Operations in the Physical Plant (now Facilities Management) Department, retiring after 20 years. He thought he would spend more time with his family and working in his garden, his lifelong hobby, but the Lord had other plans. Jim was called to serve as the Church Administrator at Christ Community Church for several years and where he also served as Elder until his death., Jim was very active in ministry for his Lord and Savior, Jesus Christ. He taught Sunday school, led Bible studies in their home, was a leader of the local Full Gospel Businessmen's chapter, and for two decades faithfully led Bible studies with Genny and the Good News Prison Ministry at the local jail. A great believer in the power of the cross and prayer, he and Genny prayed for many people throughout years and received many miraculous answers to those prayers. He truly had a life well-lived and will be greatly missed by his family and friends. His kindness and integrity earned him great respect in all he did. We can hear the Lord telling him, "Well done, good and faithful servant." There will be a private burial followed by a memorial service at Christ Community Church on Monday, June 29, 2020, at 2:30 p.m. Social distancing among non-family members and masks will be required for all in attendance. Condolences may be sent to the family at www.hillandwood.com.

To plant a tree in memory of James Smith as a living tribute, please visit Tribute Store.
+1
Plant a tree
+1