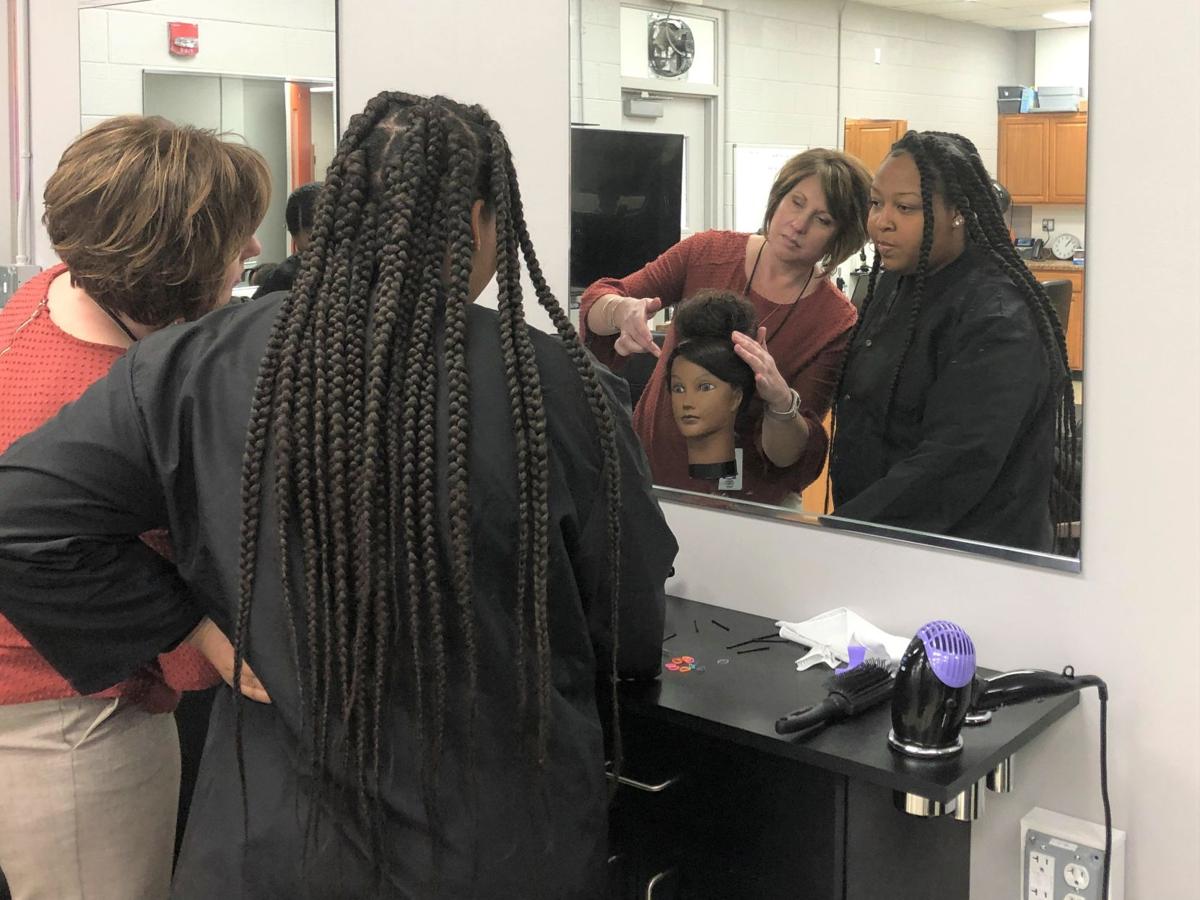 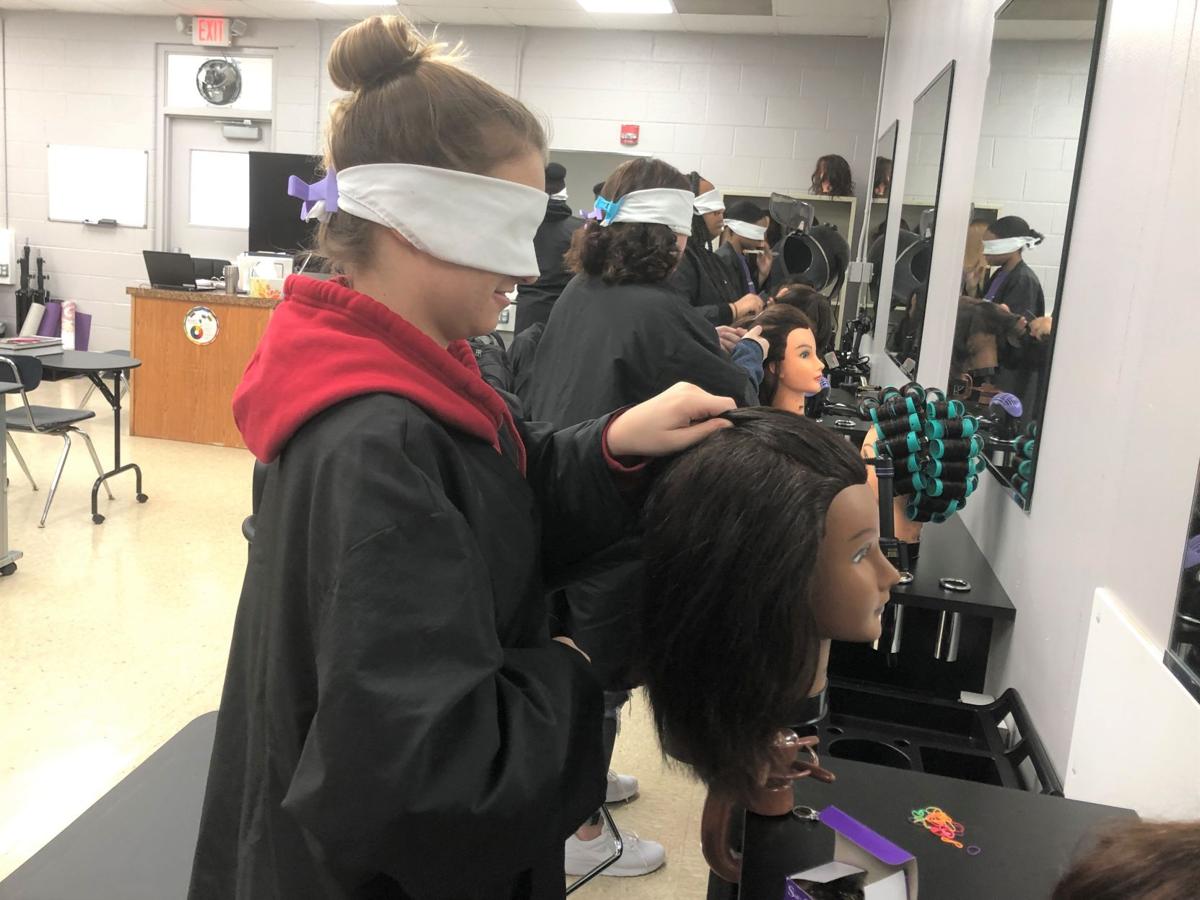 Taylor Anglin learns to work by touch alone during a blindfold exercise in her cosmetology class. 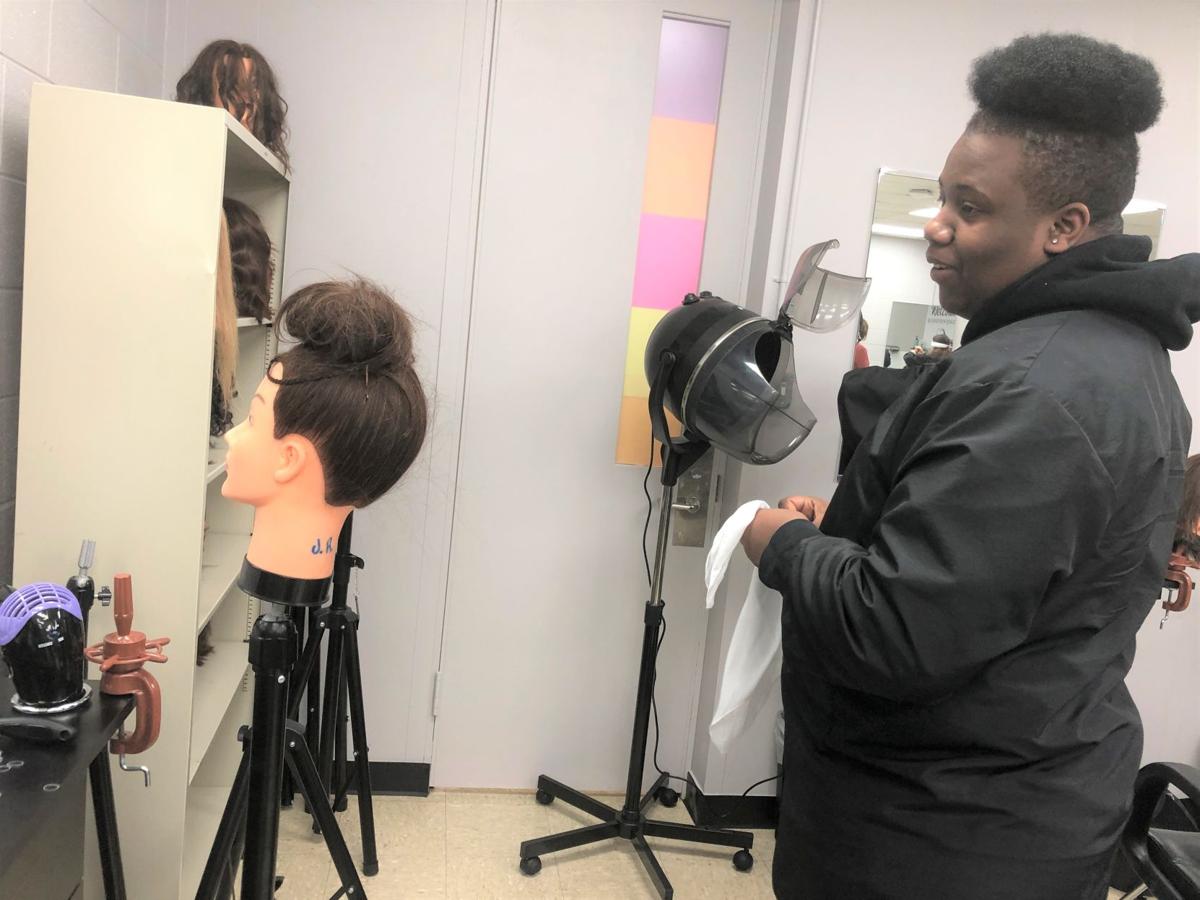 Jaylyn Rogers inspects his work on a mannequin head during cosmetology class. 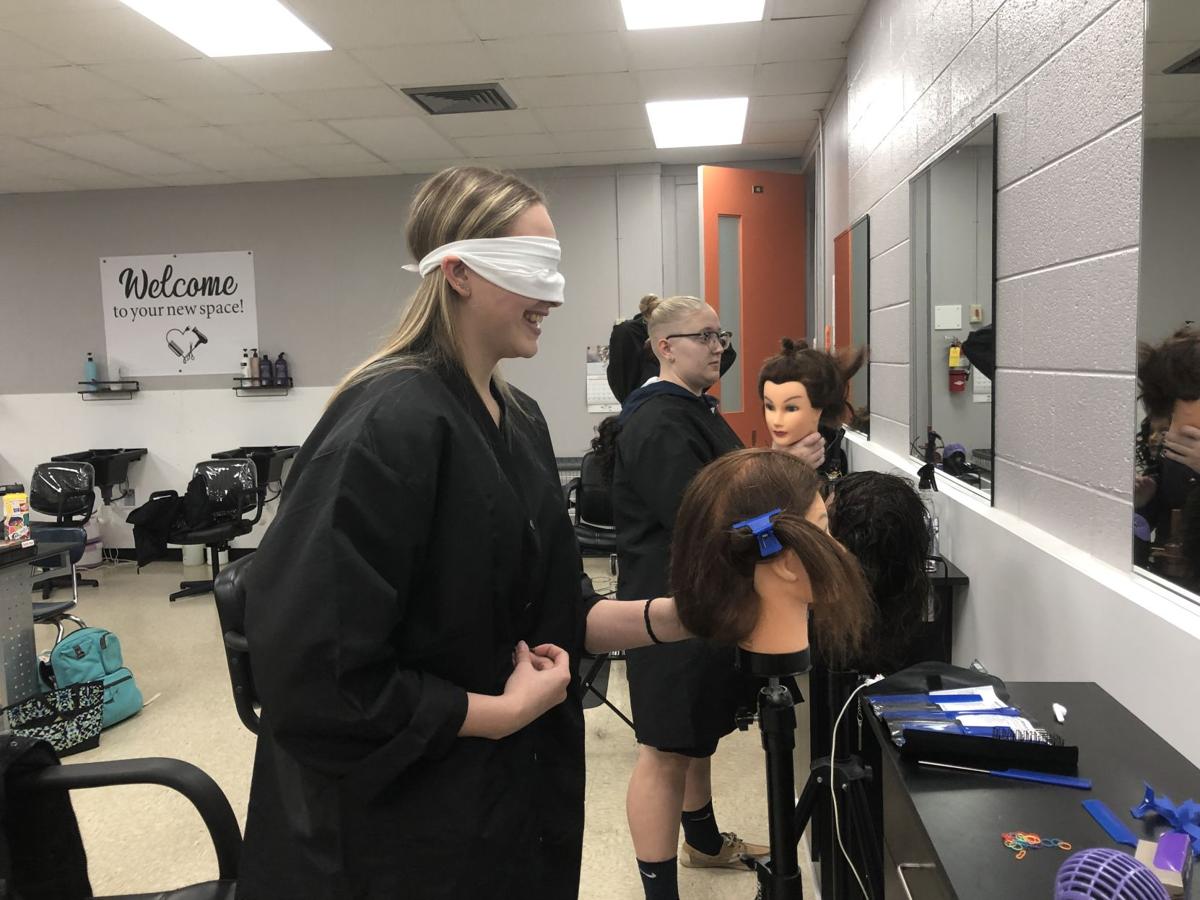 From left, Taylor Maddox styles her mannequin's hair by touch alone while Shelby Jones decides what she'll do to improve her styling. 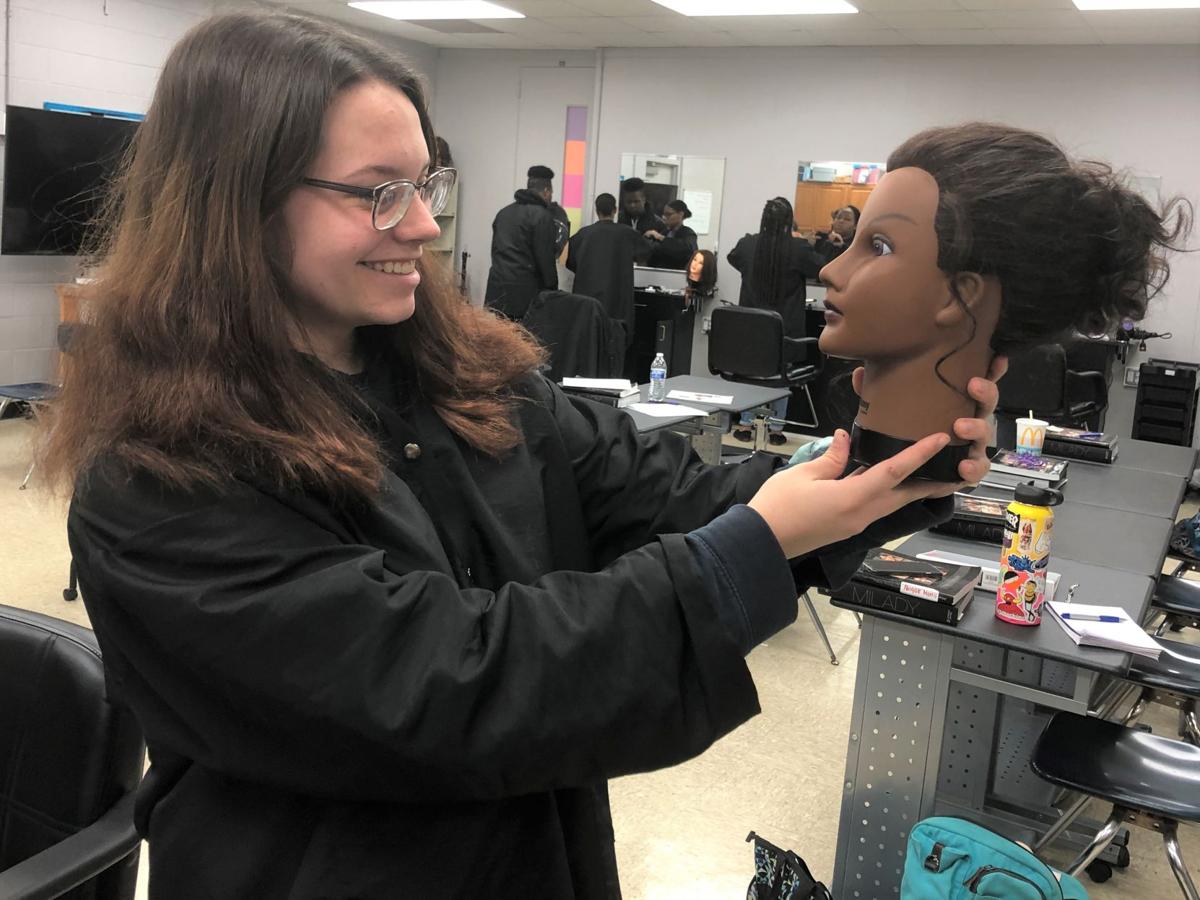 Abigail Morris is pleased with the way her styling exercise turned out.

Taylor Anglin learns to work by touch alone during a blindfold exercise in her cosmetology class.

Jaylyn Rogers inspects his work on a mannequin head during cosmetology class.

From left, Taylor Maddox styles her mannequin's hair by touch alone while Shelby Jones decides what she'll do to improve her styling.

Abigail Morris is pleased with the way her styling exercise turned out.

Last Thursday was blindfold day in Rebecca Kennon’s cosmetology class at the Taylor Education Administration Complex (TEAC). Her students tied kerchiefs over their eyes and got to work creating “up-dos” on very patient mannequin heads.

Now in their second semester of Orange County High School’s new two-year cosmetology program, the future stylists drew on their sense of touch, their familiarity with the hairstyle—and a whole lot of bobby pins.

“It was horrible!” said Taylor Anglin with a chagrined smile. Unable to see what she was doing, she’d used “at least 14 or 15” bobby pins to keep the mannequin’s hair aloft.

But with Kennon’s guidance, Anglin learned what she could do better next time, with or without a blindfold. She listened and watched intently as her teacher showed her small adjustments that made a big difference.

Arranging hair by touch alone is truly hands-on learning, and Kennon said the “fun and different” assignment would help her students develop dexterity and get a better feel for pin placement. Those pins need to be positioned exactly right, she stressed, in case the carefree client with the up-do breaks into a dance or walks headlong into a windstorm.

A licensed hairstylist who owns All About Hair in Unionville, Kennon graduated from Orange County High School in 1997. She studied cosmetology during her senior year and for one additional year at the old Carver-Piedmont Center in Culpeper. She’s had her instructor’s license for the past two years.

When the Orange County Public Schools expanded its Career Technical Education (CTE) courses to include cosmetology, Kennon was eager to offer current high school students the same opportunity she’d had.

“I had a fantastic teacher in cosmetology who has become a friend over the years. She really did inspire me to want to teach it at some point,” Kennon said.

“I really love seeing the vocational programs getting started here in the county—and growing,” she added. “I’m so happy to be a part of that.”

The 10 juniors in Kennon’s class are bused to TEAC from the high school for the first two blocks of their four-block school day. Next year, they will return for their second year of training, which will culminate in final preparation for their state licensure exam. Kennon also will instruct a new group of juniors and shift from part-time to full-time teaching status.

Last semester, the cosmetology class met at Med Spa in Orange. When Med Spa made some changes, the group needed a new home. Fortunately, space was available at TEAC. The school division’s facilities and maintenance crew went into overdrive and outfitted a large room (formerly occupied by the child care center that the school board canceled last year) into a combination classroom and practice salon—an ideal setup that gives them access to school employees who someday might be their clients.

The students spend part of their morning learning the theory behind cutting, styling and coloring hair. They listen to Kennon’s lectures, read their textbook and complete written assignments. They study chemistry so they understand what’s going on when they mix and apply dye to hair and talk about what it takes to build good working relationships with clients.

During the practical-application part of the class, they learn how to give a salon-caliber shampoo and practice cutting hair and applying color to the mannequin heads.

They also learn how to give manicures and pedicures. Sometimes they practice on each other (and occasionally on their teacher), and they had a day when they offered free manicures to TEAC employees.

Kennon said by the end of the semester or early next year, these students will have the chance to bring in volunteers—friends or family members—so they can get further, real-life practice cutting and styling hair. Eventually, she continued, the student salon will offer its services to people in the community at reduced cost. Kennon said proceeds will be funneled back into the program.

There originally were 14 students in the class, but according to Kennon, three decided they didn’t want to pursue cosmetology as a career, and another dropped out due to failing grades in required core courses.

Those who have stayed say they are learning a lot.

MacKenzie Smith is looking ahead to her future.

“It’s hard, but it’s worth it,” she said. All the studying will pay off, she explained, “because in the end you can be an actual [stylist] and have your own salon.”

Jaylyn Rogers already is making plans for his own salon. He wants to do hair three days a week, nails another three and take Sunday off.

Cutting hair evenly has proven hard, he said, but he is up for the challenge and especially likes giving manicures.

Asked what he would tell 10th graders thinking about signing up for the cosmetology program, he said, “It’s fun—you’ve just got to pay attention a lot. Don’t miss a lot of days of school because you’ll be behind.”

A couple of the students said they’d learned about the program from former Principal Kelly Guempel and signed up with his encouragement. Several have wanted to be hair stylists since they were young children and have practiced on family members whenever possible.

Taylor Anglin has four years of experience helping out at her aunt’s shop. But in Kennon’s class, she said she has gotten formal training that wasn’t possible during her apprenticeship in a busy salon: “I’ve learned how to do perm wraps and curlers and finger waves.”

Blindfold day had its lighter moments. At one point, student stylist Shelby Jones worried aloud that she was giving her mannequin a mullet instead of an up-do. There were outbreaks of giggling during and after the blindfold experiment, and Kennon was fine with that. She’d said the day before that she wanted to change up the pace and give the class an unusual challenge. The best part, however, was when the students saw what they could do better, made adjustments and beamed at their creations.

Exclaimed one apprentice stylist, holding her mannequin head aloft, “I’m so proud of myself!”

“She’s got the love of hair”

OCHS Principal Wendell Green calls the cosmetology program “a great addition” to the high school’s CTE curriculum. He commended Kennon for helping students make a smooth transition into their new space at TEAC and said that overall, she has done “a tremendous job with getting this program off the ground.”

School board chair Sherrie Page is another fan—and as a hairstylist and salon owner, she is an unusually knowledgeable one.

Of Kennon, Page said, “She’s got the perfect temperament to handle that program. She is just pleasant, encouraging, easy-going. She’s firm. She’s got the love of hair.”

As for the students’ prospects in their chosen field, Page is optimistic.

“If they are committed and willing to work hard, they can make a great living,” she said.