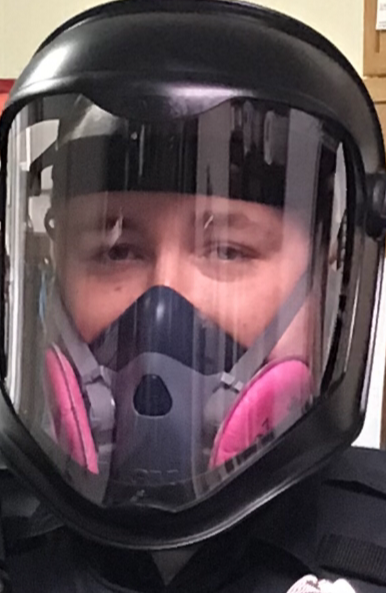 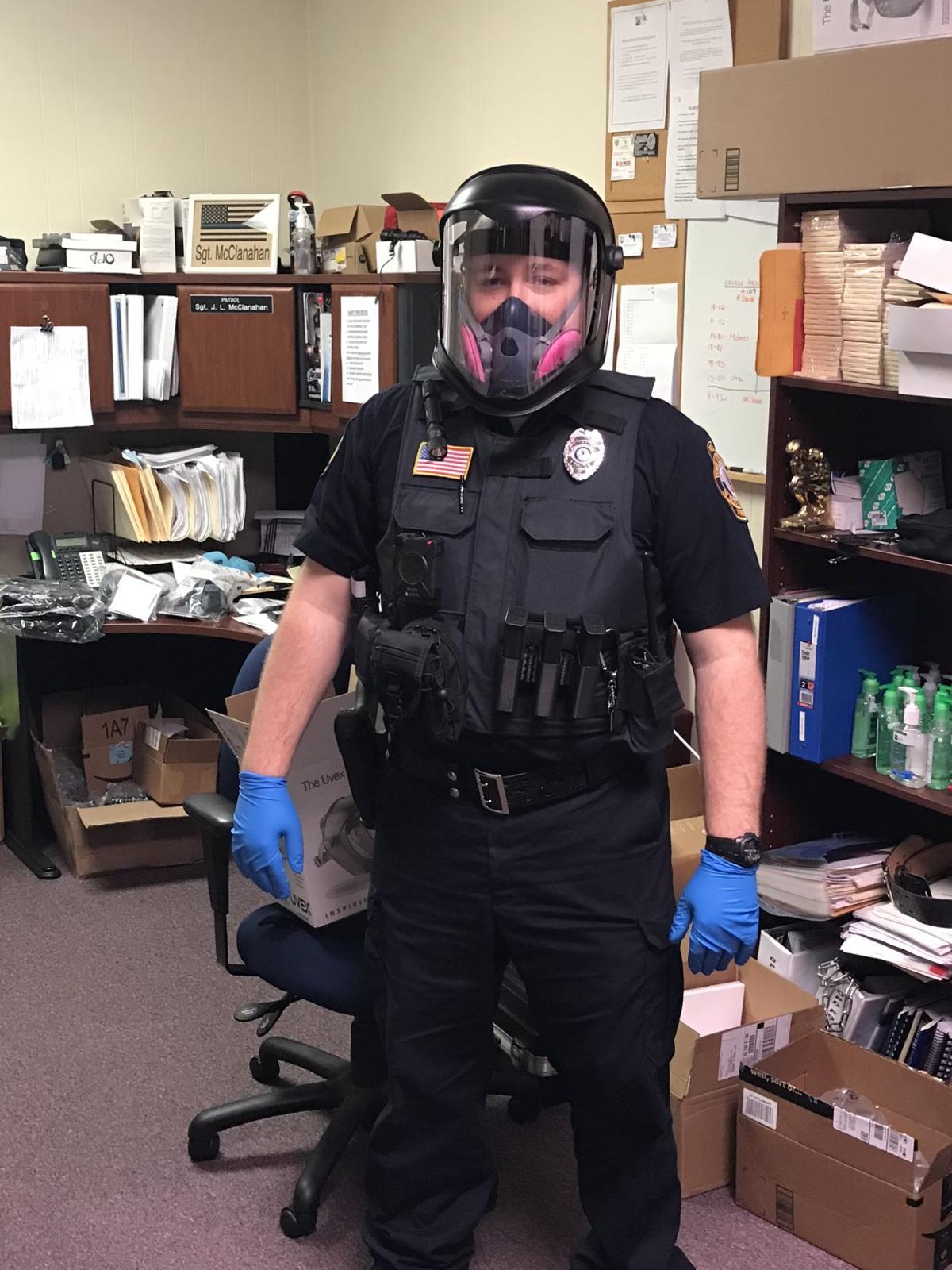 Orange Police officer Stephen Coyle demonstrates how he and his fellow officers suit up when heading into a situation where someone may be infected with the new coronavirus.

Orange Police officer Stephen Coyle demonstrates how he and his fellow officers suit up when heading into a situation where someone may be infected with the new coronavirus.

When Orange Police Chief Jim Fenwick first started reading about the coronavirus in early March, he took stock of the personal protective equipment (PPE) the department had. He then put a sign over the water cooler urging all staff members to take vitamin C to boost their immune systems.

Once COVID-19 turned into a pandemic, he said his colleagues thought, “Oh, gee, the chief’s not so crazy after all.”

The Orange Police Department had acquired personal protective equipment in response to the Ebola and H1N1 outbreaks of past years, and Fenwick said he was satisfied with his office’s initial level of preparedness. But with town council’s approval, he has purchased a variety of items, including respirator masks with replaceable cartridges, and face shields he likens to “astronaut helmets.”

He said the supplies, including booties that cover officers’ shoes, will be used in situations outside the scope of the pandemic.

For “particularly grizzly crime scenes” involving decomposed bodies, he said full-on PPE is a way to reduce risk to officers’ health and safety.

Orange Police officers began wearing protective gear on a regular basis a few weeks ago and he has divided his staff into teams so that fewer people are in the office at any one time. The chief said the county 911 dispatch office has begun screening calls to law enforcement will know in advance if they’re headed into a situation where someone might be ill with the novel coronavirus.

Since the pandemic began, Fenwick said there has been one occasion when an officer had to wear the highest level of protective gear during an investigation. He added that one suspect about to be incarcerated at the Central Virginia Regional Jail was first taken to the hospital in Culpeper for virus testing.

With some anti-viral disinfectants in short supply, the creative chief and his team have begun swabbing down the backseats of the cars with “an anti-viral, anti-fungal, anti-bacterial” spray typically used to clean tanning beds. And they use Barbicide to decontaminate handcuffs and the metal cage separating the front and back seats. As the name suggests, the disinfectant is commonly used in barber shops and hair salons to clean combs.

Fenwick said he has seen pandemic “price-gouging” when it comes to basic supplies such as liquid soap. He received an email from a public safety supply company advertising five gallons of soap for $500. The chief was having none of it, since he can buy the same product for a dollar a bottle at a local store. And while the soap was unavailable during the height of local panic-shopping, he hasn’t had any trouble buying it lately.

The Orange Police Department has received some citizen inquiries about Gov. Ralph Northam’s executive order closing many businesses deemed non-essential during the pandemic, the chief said.

He declined to give an opinion on the executive orders on crowd size, social distancing and business closures, but he said, “I’m thankful that we live in a community where people are reasonable. This is something we can work through as a community.”

He added that his message to the public during the pandemic is, “Behave. … We’re still writing tickets as needed. Yes, we’re still arresting people as needed.”

According to Sgt. Brent Coffey, public information officer for the Virginia State Police, troopers have observed “an uptick in more extreme speeding by motorists on the interstates that are less crowded during the stay-at-home directives.”

He said state police want everyone to know that “an open road is not an open invitation to speed. State police troopers across Virginia are still actively enforcing posted speed limits.”

On the plus side, Coffey said there have been 32 fewer traffic fatalities in Virginia this year compared to the same period last year. From Jan. 1 through May 19, 2020, there were 257 deaths resulting from traffic crashes. For the same period in 2019, the number was 289.

Coffey also said state police have an “adequate” supply of PPE which officers are using on “a case-by-case basis.”

Social distancing at the sheriff’s office

At the Orange County Sheriff’s Office, Sheriff Mark Amos said he has told his deputies not to come inside the office “unless absolutely necessary.” If they must, they are asked to observe social distancing.

He said deputies are now wearing masks and gloves when dealing with the public. The gloves are standard practice for investigations, he noted, but the masks are a new addition.

When it came time to assess the supply of protective gear, Amos said his office already had much of what was needed. However, he was able to purchase 500 masks from an importer, a friend of his, who sold the sheriff’s office the masks at his cost, plus tax.

As had been announced some weeks ago, the sheriff’s office currently is closed to the public. People seeking to be fingerprinted for job applications or just to visit are not welcome for the time being.

“People have been dealing with it pretty well”

Amos said no one in the office has been sick with the virus. Staff members have been allowed to work from home. Since the public health crisis began, the sheriff said his office has responded to “a little bit more shoplifting and a few more” domestic altercations. But in general, “Nothing has really jumped out at me.”

Commenting on the local response to the pandemic, he said, “People have actually been dealing with it pretty well.”

Maj. Mike LaCasse noted that the office has not received many complaints about large groups of people. He said deputies have “called and educated” people reportedly seen congregating in groups numbering more than 10.

In Gordonsville, Police Chief Glen Arrington said each patrol car has its own PPE kit, including gloves, mask, face shield, protective gown and hand sanitizer. Sanitary wipes and disinfectant are used to clean the cars.

“We encourage our guys to take as much precaution as they can. They have those kits available to them. If they feel there could be risk of exposure, they put their PPE stuff on,” Arrington said.

As for supplies, he said, “We’re keeping inventory of what we have, trying to replenish as needed. As of right now, we have adequate supplies. We’ve also had citizens drop off some of the handmade masks.”

He said he had not seen any increase in domestic violence or shoplifting since the pandemic began.

Fenwick, Amos and Arrington remain stoic in the face of the pandemic. But since early March, the world has changed, and some dimensions of law enforcement have changed with it.

As Fenwick described the situation, “It’s nothing like anything any of us have experienced in our lifetimes.”