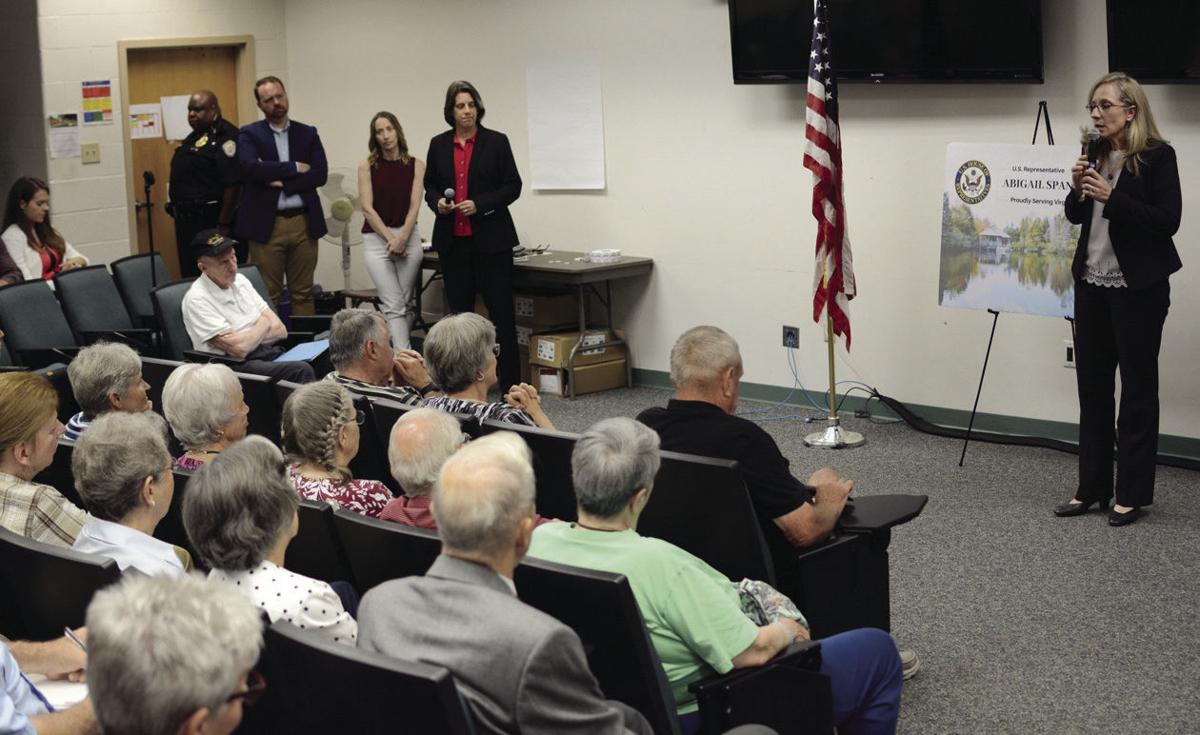 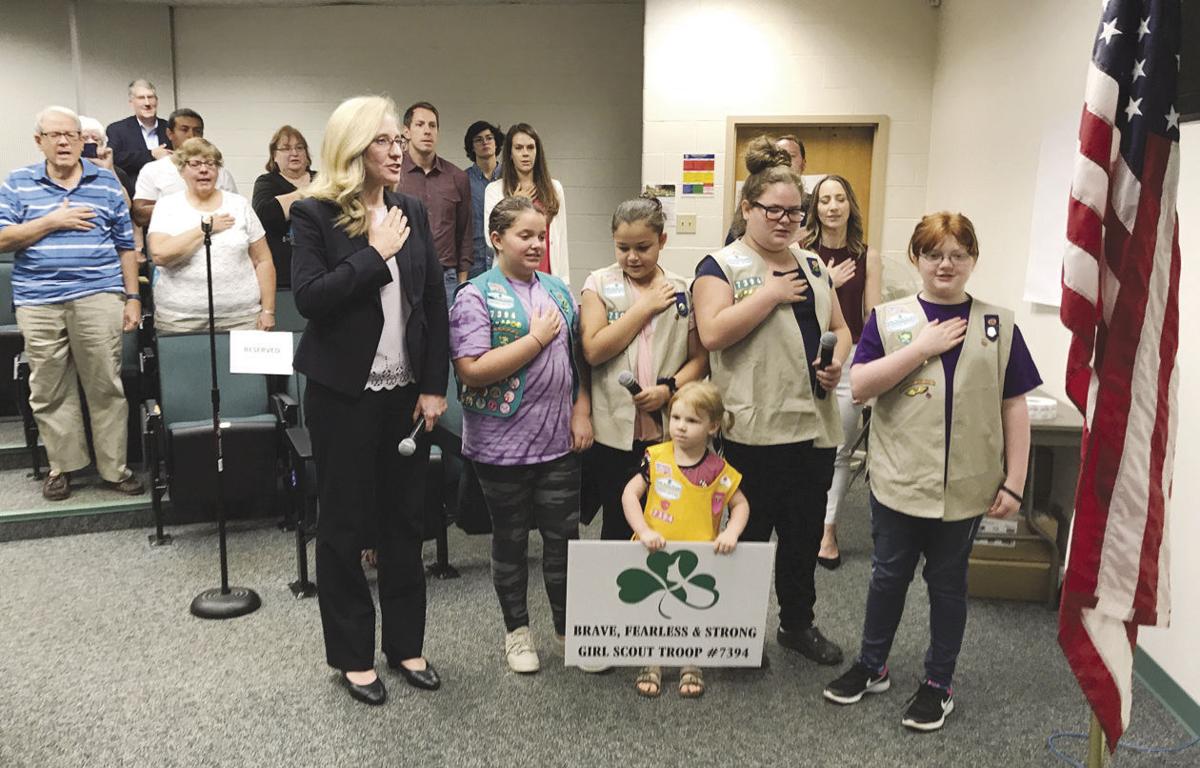 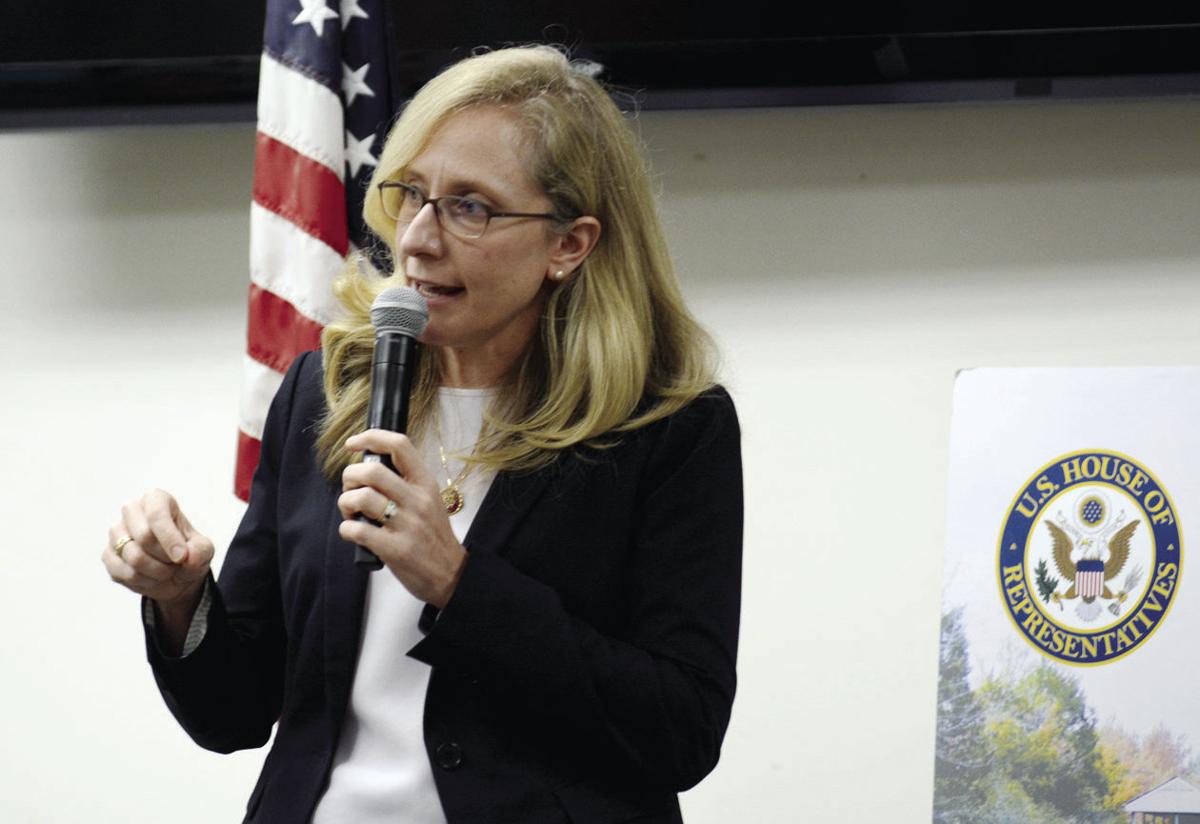 On Sunday afternoon, Rep. Abigail Spanberger held a town hall meeting with constituents in a Germanna Community College lecture hall in Locust Grove. It was the 10th such gathering in her tour of all 10 counties in the 7th Congressional District during her first year in office.

Before an audience of residents from Orange, Culpeper and Spotsylvania counties, the first-term congresswoman promoted a bipartisan approach to problem-solving on the national level and said her favorite part of the job “is the legislation—getting out in the community, doing tours, talking to people and figuring out what the legislative fix could be.”

One discussion topic of particular interest to Orange County farmers concerned the impact of tariffs and their relation to national security.

Spanberger said that ever since her campaign, she has been hearing concerns from 7th District residents about the impact tariffs have on soybean farmers across central Virginia and the country.

“This is not just an issue of a farmer not being able to sell his or her crop, but an issue of losing markets,” she said. The longer the trade war lasts, the more the buyers will find other producers, she said. “They’re buying from Argentina and Brazil, but our farmers want to get them back.”

Bailouts exist to support the farmers in the interim, she said, but with money borrowed from China.

“We started a trade war with China, and now we’re borrowing from China and other countries to make sure our farmers don’t actually go under,” Spanberger said. “But our producers don’t want bailouts; they want to sell soybeans and their products.”

Other hot-button topics included the House of Representatives’ impeachment inquiry of President Donald Trump. Marty Caldwell of Lake of the Woods wanted to know where Spanberger stood on the issue.

“We are in an impeachment inquiry,” she responded, choosing her words carefully. “It is a long and slow process, but it is the process we have a responsibility to follow.”

She said, “The judiciary committee investigating allegations is continuing methodically, but if we are looking at the potential for casting a vote on the floor of the House of Representatives, to possibly impeach a president, I believe we must do the full due diligence possible to ensure every piece of evidence for or against is available for every member of Congress to take that vote.”

Another member of the audience asked why House representatives don’t do a better job promoting bills they’ve passed so constituents can encourage their senators to act on these matters.

“We’ve passed some good bills, with both our Republican and Democratic colleagues,” Spanberger said.

But in too many cases, she continued, the Senate does not bring bills passed by the House to a vote. As examples, she cited H.R. 8 (a gun background bill recently in the news), an environmental bill to reinstate the United States into the Paris Accord, the Equality Act, which is civil rights legislation for LGBT citizens, a minimum wage bill and campaign finance reform.

A Spotsylvania resident brought up climate change and clean energy, and Spanberger expressed grave concern about the impact of a changing environment on the economy, health and national security.

As chair of the conservation and forestry subcommittee under the House Agricultural Committee, Spanberger said congressional leaders are bringing diverse constituencies to the table to discuss protecting and conserving the nation’s natural resources.

“Within the agricultural committee, we recognize if we don’t have healthy soil and clean water, it impacts what is the most vibrant part of the Virginia economy—which is agriculture,” she said.

After Spotsylvania resident Dave Hopkins said his credit card company had capped his debt limit during his home renovation, he asked Rep. Spanberger what her plans were for getting the federal debt under control.

Joking that she was glad he didn’t ask her to extend his credit limit, the congresswoman said she is deeply concerned about the fiscal trajectory of the country.

“My background is as a former CIA officer. Our debt and our rising deficit [are] a natural security risk,” she said. “It’s a risk when you look at the fact that the largest foreign holder of our debt is China. We are borrowing and borrowing and borrowing, and we are not making plans for it to stop.”

Spanberger said she joined the Blue Dog coalition—a group of Democrats concerned with national security and fiscal responsibility—to address the problems caused by the national debt and the growing deficit.

“I have joined with my colleagues to make leadership aware we need to prioritize addressing the debt,” she said. “I voted against the budget speaker [Nancy] Pelosi put forward because it was a bit of a backroom deal that did not address how we would work our way back. We were just putting more money on the credit card without so much as a conversation with those of us who prioritize fiscal responsibility and long-term strategic planning about how we are going to dig ourselves out of this hole.”

She said she co-wrote a letter requesting the Democratic leadership abide by the “pay-go” rule, which says when new legislation is proposed, there is a corresponding proposal to pay for it.

“That’s not a rule we’ve been respecting,” she said. “We need to get our fiscal house in order. We expect our fellow Americans to do it every day, but, in fact, the federal government continues to push it off and it’s a long-term threat to us. Next year, we will spend more money on our debt than on educating our children and in five years, we’ll spend more on our debt than on our military.”

Other questions dealt with immigration and gun safety.

“These are really difficult and very emotional issues. We can stop and take the emotion out of it and have a rational conversation about how our legislation can actually impact people’s lives,” she said.

To that end, she said she joined the “problem-solvers caucus, comprised equally of Republicans and Democrats.”

The group recently traveled to the U.S. border with Mexico to witness and discuss immigration challenges there. Spanberger said she wanted to see the crisis “not just with my own eyes, but through the eyes of someone with a different political perspective. More of us should do that and be willing to hear someone else’s perspective.”

Spanberger said she carried a firearm as a federal agent and grew up in a family that owned guns. She said she respects the notion of responsible gun ownership, but asked, “What’s our common goal?

“If the community’s goal is to cut down on the number of people who die by firearms, we need to look at what’s not working in our system. We have background checks. They work. The shooter in Texas had failed a background check, but because not every point of sale requires a background check, he was able to get a gun. The system works, but we don’t allow it to be applied everywhere.”

Solving these kinds of problems begins with engaging in productive conversations, she said.

She circled back to an earlier point: “What’s our goal? To argue? Debate or solve a problem? It’s something we seem to have lost in our day of bumper-sticker politics which doesn’t serve the purpose of moving this country forward.”

Spanberger fielded a question from a local businessman who said he needs to hire more employees, but getting foreign workers is time-consuming, expensive and difficult. He said there are immigrants available he’d like to put on the payroll legally.

Spanberger cited the ways immigrants can become credentialed workers in the United States, including the Dream and Promise Act and H2A visas. However, she said she is aware that across the Seventh District and in farm communities elsewhere, producers can’t always fill the jobs they have for both skilled and unskilled workers.

She said her participation in the problem-solvers caucus is vital to her work on immigration reform, and the group is continuing to pursue solutions.

Another question brought up the controversial separation of children from their families at the U.S. southern border.

Rep. Spanberger said she co-sponsored the “Keep Families Together Act,” and said there is “absolutely no reason for us, as a country to separate children from their parents at the border. I firmly support upholding our laws, but we can do it in a way that’s consistent with our values.”