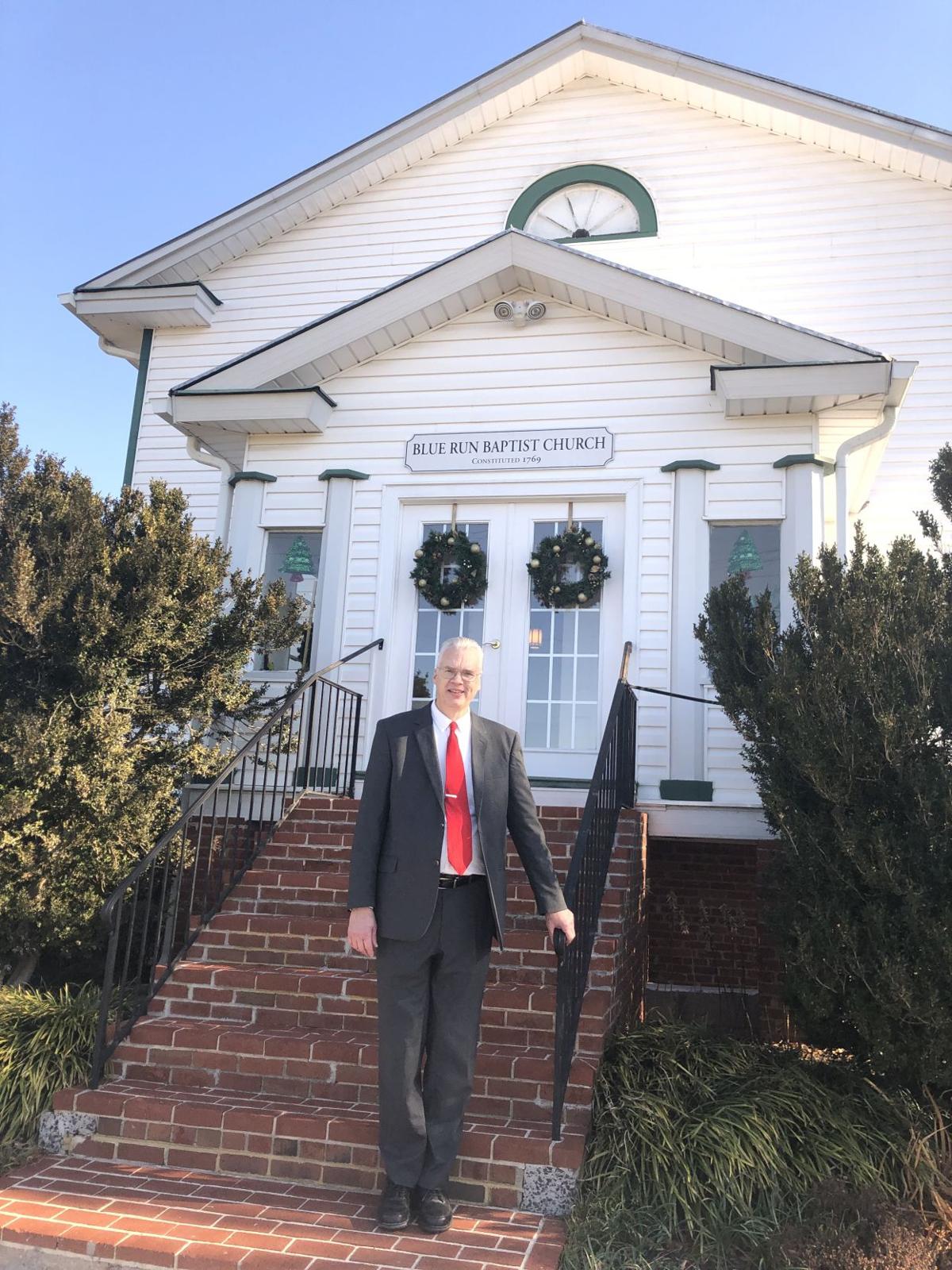 The Rev. Barry Higgins has been the minister at Blue Run Baptist Church in Somerset for about three years. 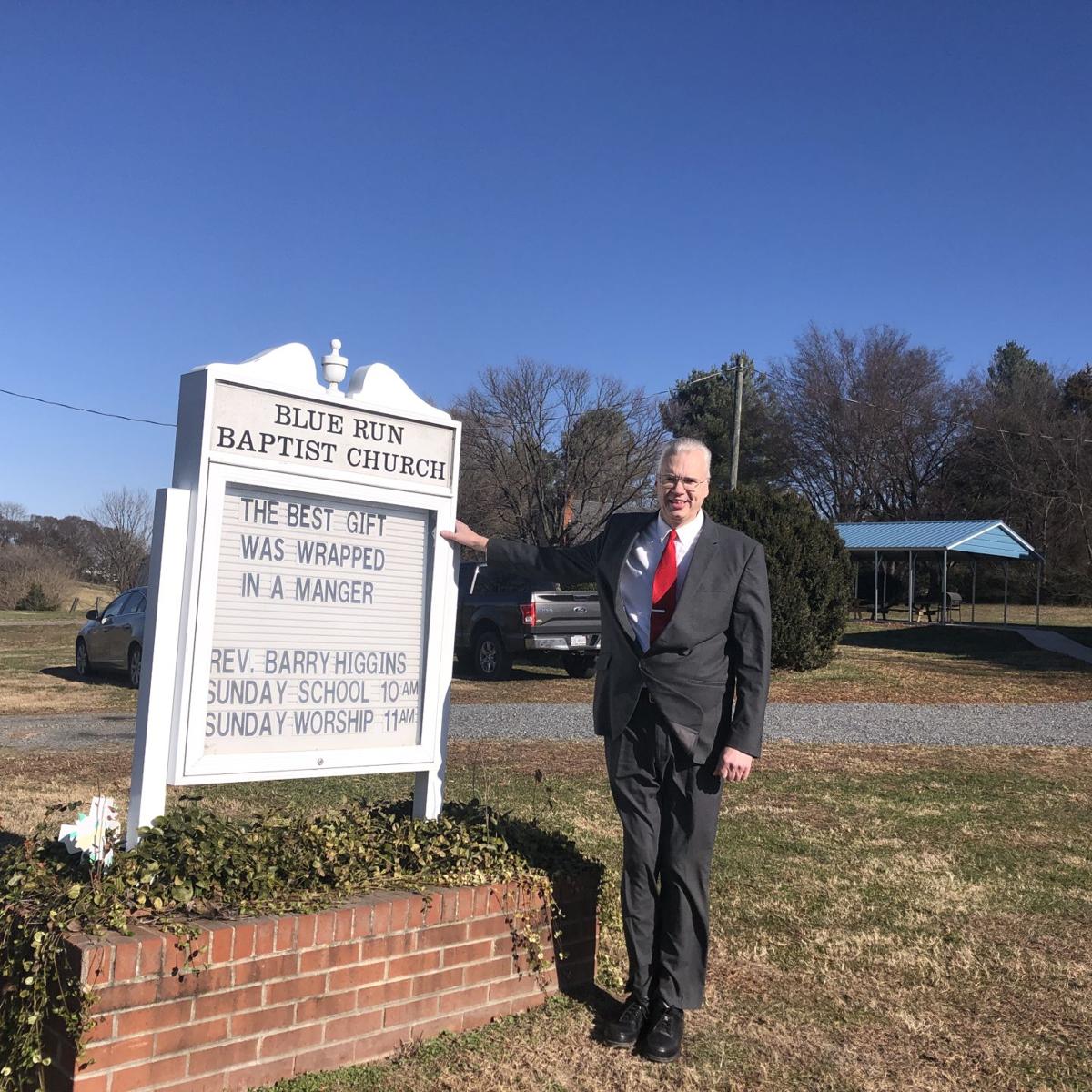 Barry Higgins is gearing up for the Christmas Eve service at 7 p.m. on Tuesday.

The Rev. Barry Higgins has been the minister at Blue Run Baptist Church in Somerset for about three years.

Barry Higgins is gearing up for the Christmas Eve service at 7 p.m. on Tuesday.

“I’m a sinner,” said the Rev. Barry Higgins of Blue Run Baptist Church, seated in the shadows of his church sanctuary on a recent morning. “We will sin to the day we die.”

Higgins spoke with utter conviction. Six feet, five inches, dressed in a dark suit and tie, his hair clipped short, he looks like a Baptist preacher off a movie lot. He said he preaches from the King James Bible and doesn’t let “man’s opinion” get in the way of his message.

He has led Blue Run in Somerset (not to be confused with Blue Run Baptist Church in Barboursville) for about three years. He started out filling in for his predecessor four years ago, “and the next thing you know, here I was. The Lord will lead you around like that.”

Higgins, 59, is originally from Sandusky, Ohio, but his family moved to Albemarle County when he was 4 years old. His father was the superintendent for the heating plant at the University of Virginia. When it came time for him to choose a career, young Higgins completed a four-year trade apprentice program at UVa and accepted a job as a mason at the university.

God “always chooses the least likely” candidates for the ministry, Higgins said, describing himself as “kind of shy, scared to speak in front of people.”

But he did as he was told: “He just put it on me one afternoon. … He put it upon me to start preaching.”

Higgins started out as a lay minister while still employed at UVa. He completed a two-year program at Liberty University for working ministers seeking ordination.

Higgins is completely dedicated to his spiritual calling. He believes every one of his sermons should “point to the cross,” and he puts a lot of time and reflection into the message he delivers. He said that after church each week, he quickly begins planning his next sermon: “When I go home on Sunday afternoons, I start praying for the Lord to give me a topic, and usually he does. I pray about it and think about it.”

However, he doesn’t necessarily stick to the notes he writes out. If he feels called to speak spontaneously, he has been known to do so.

“It’s a challenge,” he said of preaching, but in a good way. “I like doing the work of the Lord, what he puts on me.”

The two Blue Run Baptist Churches were once a single, racially integrated church founded on the Barboursville site in 1769. They split in 1885 when five white families decamped for Somerset.

Both churches celebrated their 250th anniversary this year. The Barboursville church marked the historic occasion back in the summer and participated in Blue Run Somerset’s special homecoming and revival week in October.

Although Higgins doesn’t believe the two churches, both with small congregations and with a shared history dating back to Colonial times, should try to merge back into one, he said he is in regular contact with the Rev. Robert Anthony, pastor of Blue Run Barboursville, and their congregations visit back and forth.

Higgins is proud of the Somerset church, which has a large stone tablet featuring the 10 Commandments near the front entrance and another tablet inside listing all the church ministers. Standing outside, he pointed across the road toward an opening in the farmland and said the congregation holds its Easter sunrise service every year at Somerset Plantation, a tradition he loves. On a tour of the building, he said the pews in the sanctuary date back to 1885. Once painted black, they have been stripped down to reveal the beautiful wood underneath.

The church was originally built very close to Route 231, when the clip-clop of horses was hardly a cause for concern or annoyance. In 1949 the building was moved up the hill, away from the commotion of cars and trucks, and a new basement provided additional meeting space. Higgins said a wing was later added to the back of the church.

Higgins wants to make sure the church remains active. He is quick to offer an invitation to Sunday service and speaks with enthusiasm of the success of vacation Bible School. The hope is that children from the community who enjoy Bible School will want to attend regularly and bring their parents with them.

He regularly visits area nursing homes, his main community outreach project, and holds a Wednesday service at the Louisa Health and Rehabilitation Center.

“I feel for those who can’t get up and get out,” he said, adding that many of the people miss their families and want someone to chat with, even if it’s just small talk for a few minutes.

A resident of Louisa County, just outside Gordonsville, Higgins and his wife, Linda, have been married nearly 40 years. They have three daughters and seven grandchildren. Higgins said that in his spare time he likes to go fishing and spend time with his grandchildren. Picnics and tractor rides with the little ones are favorite activities.

At church, the Christmas Eve service is fast approaching at 7 p.m. on Tuesday. Looking beyond that—far beyond—he fervently hopes and believes that Blue Run Somerset will continue bringing together Baptists who share his faith in the word of the Bible. Alluding to the church’s landmark anniversary and its gleaming stone tablet etched with the names of all the ministers, he said, “Two hundred and fifty years from now, I’ll be a name at the bottom of the list, and a lot of people will be in front of me.”