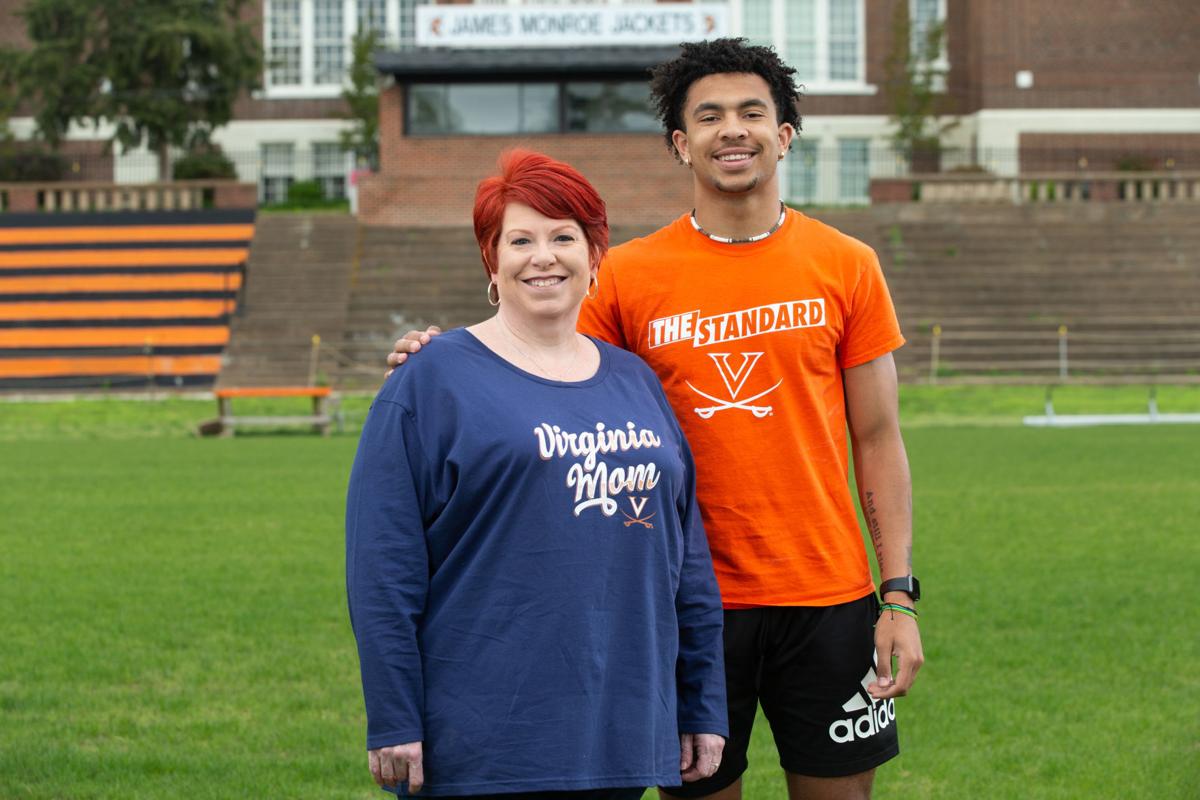 Aidan Ryan waited until Sunday to announce his college selection with his mother, Amy Ryan. 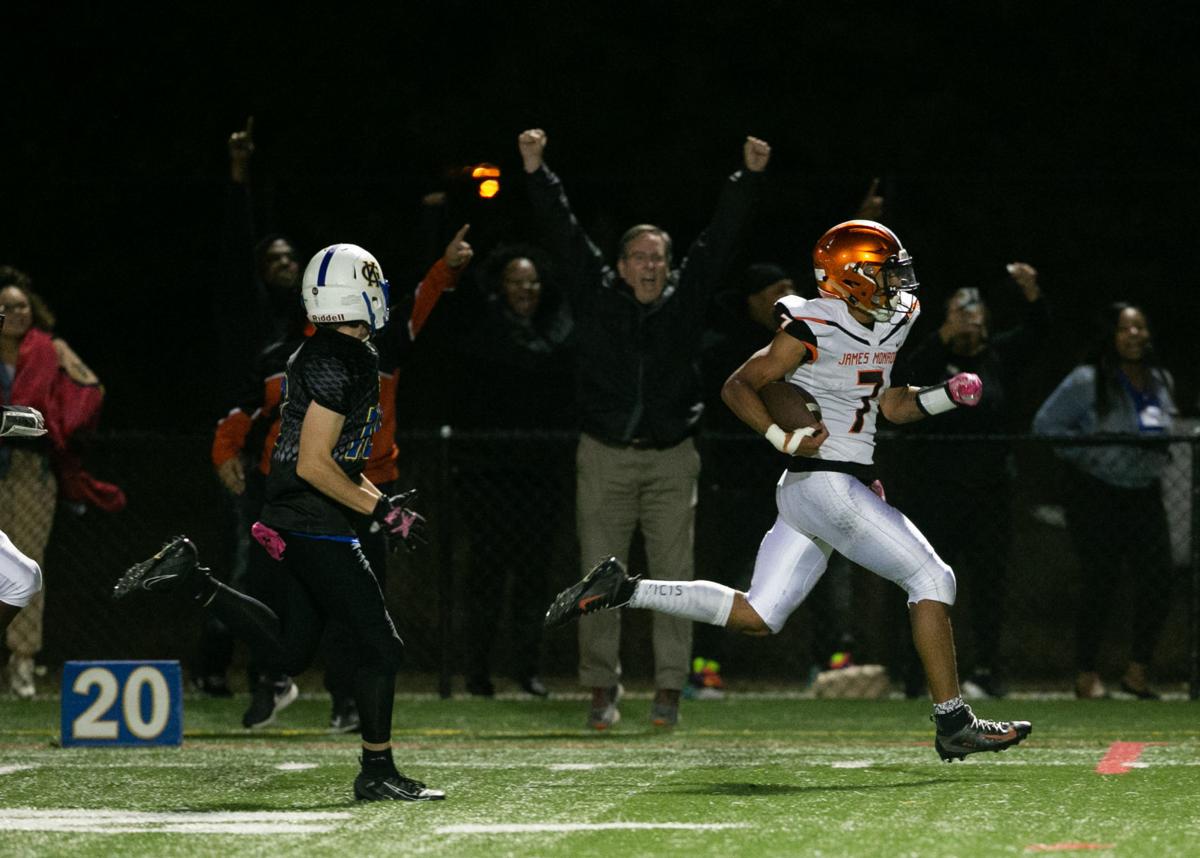 James Monroe’s Aidan Ryan returns a kick for a touchdown during a 2019 game against King George. Ryan has orally committed to play football at UVa. 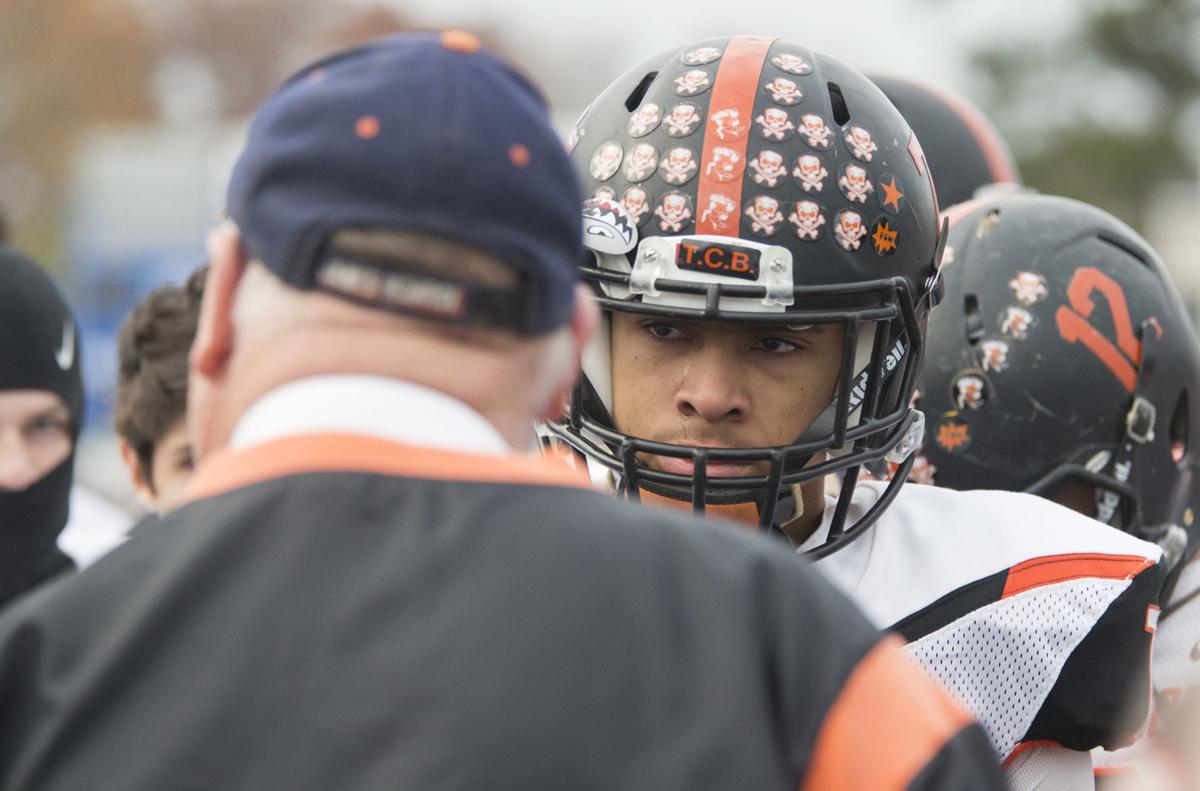 Ryan listens to JM coach Rich Serbay after a tough loss in a 2017 state semifinal. Ryan credits the role models in his life for making him a better man.

Aidan Ryan waited until Sunday to announce his college selection with his mother, Amy Ryan.

James Monroe’s Aidan Ryan returns a kick for a touchdown during a 2019 game against King George. Ryan has orally committed to play football at UVa.

Ryan listens to JM coach Rich Serbay after a tough loss in a 2017 state semifinal. Ryan credits the role models in his life for making him a better man.

FREDERICKSBURG — After scholarship offers from major college programs began to trickle in for Aidan Ryan, the James Monroe junior football standout pinpointed the exact day he wanted to announce an oral commitment.

But he soon realized six months would be too long for schools to wait and honor the offers they presented him in April.

So Ryan sped up his timetable while maintaining his pledge to recognize Amy Ryan, who has been a single mother since his birth.

Ryan announced his oral commitment to the University of Virginia on Sunday as a Mother’s Day gift, complete with a Twitter video created by JM and University of Richmond alum Jarmal Bevels explaining the timing of his decision.

“For the game that’s been so important to me, I feel that it’s only right that I make the biggest decision of my life on the day I want to honor my biggest fan — my mom,” Ryan said on the video. “… Our relationship is unbeatable.”

That bond has been nurtured from the beginning.

Ryan has never met his father and has no relationship with any members of that side of his family. He has no brothers or sisters in his household.

He said he and his mother are best friends. They go to the movies and dine out together. They have lighthearted conversations and serious talks about grades and worldly issues.

During the extra time at home because of the COVID-19 pandemic, she’s also taught him how to cook. Ryan said not having a father present or any siblings “creates the strongest bond I have with anybody” between him and his mother.

Amy Ryan has missed just one of her son’s athletic events because she had surgery that day and still regrets not being there.

Virginia was an attractive option for Ryan, a 6-foot-1, 193-pound safety prospect, in part because his mother and grandparents will be just 90 minutes away and have no trouble getting to home games.

“We go through everything together — challenges and successes,” Ryan said of his mother. “It just builds that strong relationship.”

Amy Ryan played volleyball and softball in high school in upstate New York. She moved to Fredericksburg in 1998 as a young adult when her family relocated for job reasons.

Amy Ryan made youth sports a priority for her son. She signed Ryan up for basketball, soccer, tee-ball and baseball. He stopped playing soccer when he was 6 after the ball was booted squarely into his midsection.

He first stepped onto a football field at age 7 in the Fredericksburg Parks and Recreation flag league. He began tackle football when he was 9.

“I loved football so much I just wanted to see how cute he would be in the pads and running around the field with a bunch of little kids,” Amy Ryan said. “But very quickly he took to it. It became his favorite sport above anything else.”

They had him play quarterback, receiver, defensive back and even center. Ryan played in the city’s parks and rec league for five years before he moved on to the more intense American Youth Football travel league.

He was a wide receiver, defensive back and part-time quarterback for the Fredericksburg Yellow Jackets.

“The first time I picked up a football I instantly fell in love,” Ryan said. “Sure it’s just a game, but it’s impacted my life in ways I never thought it would.”

Amy Ryan said with the help of her parents and a host of coaches and mentors in the Fredericksburg area, her son has been shaped into a dynamic do-everything performer on the field and a well-adjusted youth in the classroom where he is an honor student.

Whenever she was unable to transport him to practice or back home, someone always stepped in.

“As far as the male influence in his life, I think that’s part of the reason I put him into sports,” Amy Ryan said, “because every coach he’s had has been amazing with him.”

When John Logan arrived at Walker–Grant Middle School, he was a paraprofessional who would also serve as an assistant football and track and field coach and basketball volunteer.

But when Logan first encountered Aidan Ryan, it wasn’t during an athletic activity. It was Logan’s first day on the job and Ryan was an eighth-grader who was already established on the Tigers’ football team.

“I saw him in the hallway and the way he carried himself he was just really respectful,” Logan said. “He was a kid that was about his books. I didn’t know anybody and after the football games he and I would talk about life and from that first moment I knew he had his head on straight. So I was like, ‘This is a guy I want to be able to help.’”

Logan saw similarities in his and Ryan’s upbringing. They both came from single-mother households. Logan grew up in Northern Virginia and was an all-state running back and safety at Annandale High. He went on to play running back for Norfolk State.

He continues to serve as a trainer and mentor for Ryan.

“I know I didn’t have that father figure role model in my life and I went through a lot of struggles that I didn’t want to see him go into,” Logan said. “So I did take him under my wing and try to be that figure for him.”

Ryan’s uncommon maturity for his age helped has helped him navigate life without his biological father. He said he holds no bitterness and isn’t motivated to perform on the field to prove anything to the man who helped bring him into the world.

“At this point I would say that’s just out of the picture,” Ryan said. “It’s something I don’t even concern myself with because of the amount of role models I’ve had in my life. They’ve molded me into the person I am today and I’m nothing but grateful for it.”

Colleges take noticeLogan quickly learned that Ryan has the athletic gifts to go with his off-the-field demeanor.

In Logan’s first day at practice at Walker–Grant, Ryan took a quarterback sweep to the end zone on a long touchdown run.

“Nobody was within 20 yards of him,” Logan said. “On the next play, he’s my starting safety and he takes a pick-six to the house. I’m just like, ‘Wow. This kid is special. He’s a major talent.’”

Ryan went on to become a starting defensive back and wide receiver for JM his freshman and sophomore seasons before a breakout junior campaign.

He was named first-team all-Battlefield District, all-Region 3B, All-Area and second-team all-state in 2019.

He recorded 54 tackles (34 solo), 11 pass breakups and one interception. He also forced three fumbles. He has 10 career interceptions, including three returned for a touchdown.

Logan said Ryan should excel at the college level.

“With his work ethic, his brains in the books and his football IQ, the only thing that’s stopping Aidan would be an injury or him second-guessing himself,” Logan said. “When he goes out, just plays football and has fun. He’s one of the best athletes in the state of Virginia.”

Ryan is also an all-state long jumper for JM’s track and field team and planned to play lacrosse for the first time this season before the pandemic forced the cancellation of spring sports.

As JM’s starting quarterback last fall, he passed for 1,254 yards and 12 touchdowns, while rushing for 690 yards and five scores. He played sparingly as a receiver and finished with 14 catches for 187 yards and a touchdown.

He had two kickoff returns for a score, including a game-winning 69-yard sprint with less than three minutes remaining in a 22–21 comeback win over King George. He’s rated a three-star recruit by 247sports.com.

“He can do it all,” said James Monroe newly hired head coach George Coghill, who has been on JM’s staff since Ryan was a sophomore. “He can run. He can be physical. He has great ball skills. He’ll be able to high-point the ball … We’ve had him all over the place, so he hasn’t been able to specialize in one position and get that next-level coaching. I think once he gets that and he truly learns that position, he’s going to be a force to be reckoned with.”

After the Cavaliers followed up Louisville’s offer with one of their own, Ryan was just about certain that’s where he’d end up. Although he announced his plans on Sunday, he can’t officially sign a national letter of intent until the early signing period begins in December.

“I just thought about it and there’s no place I’d rather be,” Ryan said. “UVa has felt like home ever since my first visit and in reality that is home because it’s my home state. I feel like there is value behind growing up in your home state and having the chance to represent them once you grow up.”

Whether it’s on paper or on the field, Virginia’s linebackers impress. Heading into 2020, linebacker is arguably the team’s strong position group.