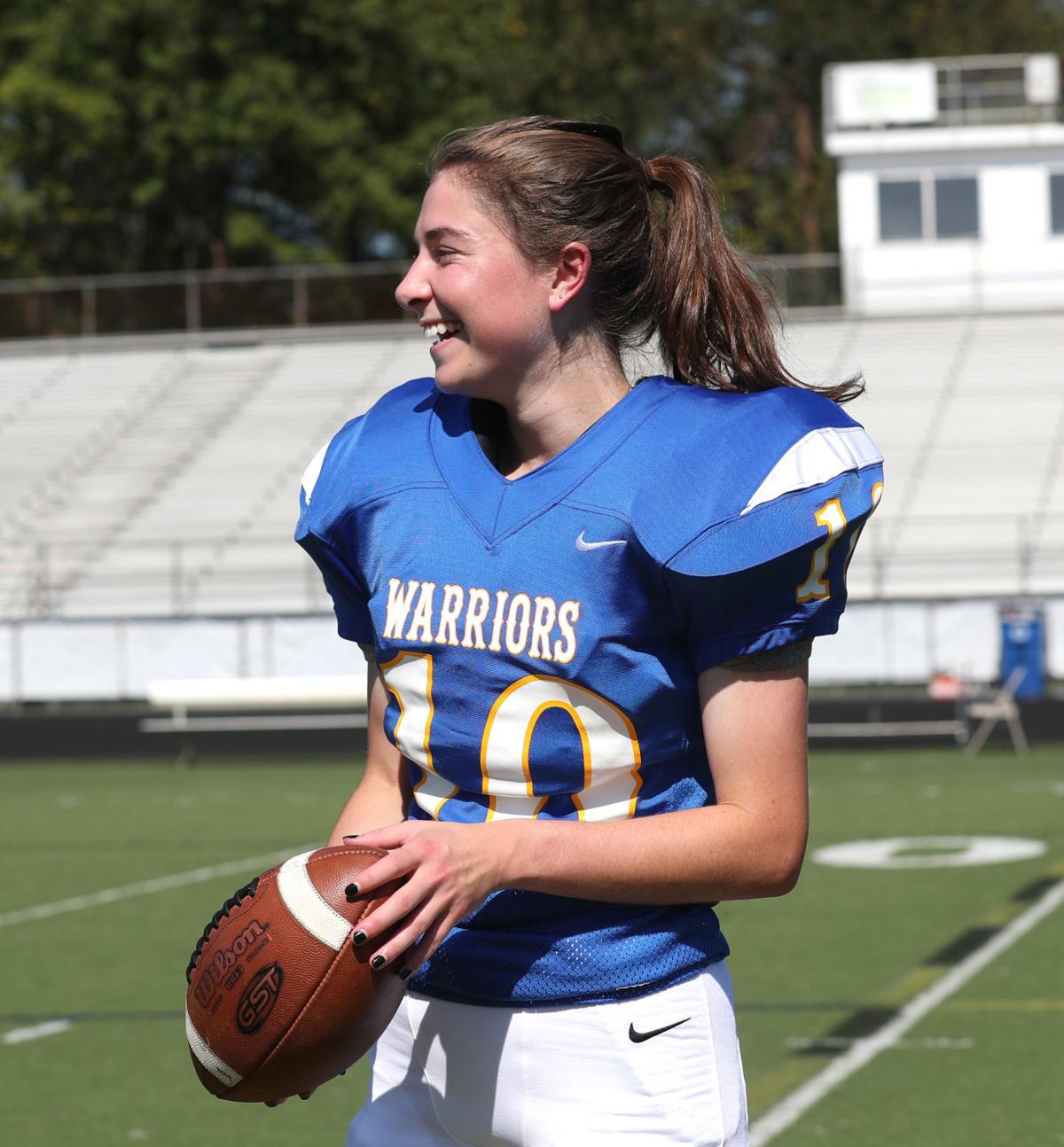 Ellie Smartt is the kicker for Western Albemarle football team. 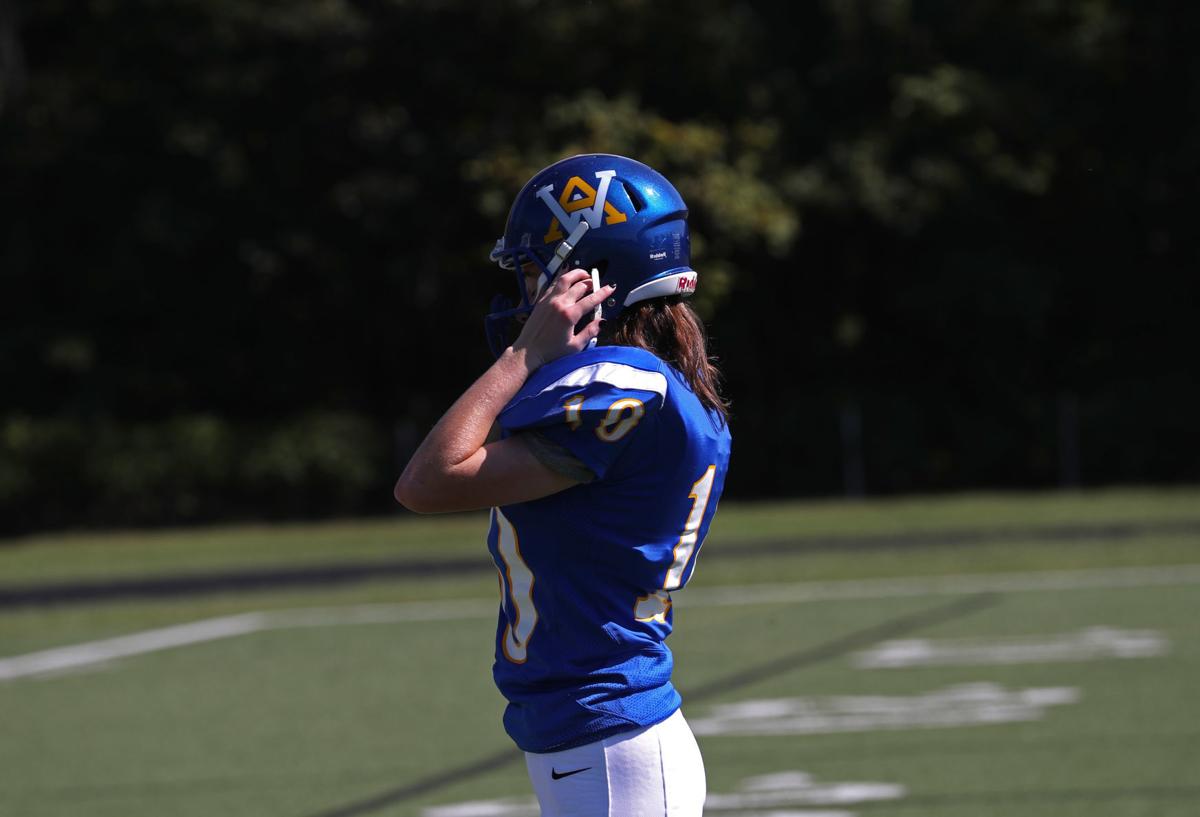 Ellie Smartt is the kicker for Western Albemarle football team.

High school is often referred to as some of the best years of your life.

For Ellie Smartt, her time at Western Albemarle High School has been just that. It has allowed her to discover her passion for the sport of football.

“Over the last couple of years, football has played a big role in my life,” Smartt said. “Football has changed the people I hang out with and my physical state. I’ve also taken lots of lessons out of football that have shaped my life.”

Smartt experiences Friday night lights in the best possible way as a member of the Western Albemarle varsity football team. The junior is the team’s primary kicker on extra point opportunities for the Warriors and serves as the backup option on field goals.

Not bad for someone that just took up the sport four years ago.

Her passion for the sport started at Henley Middle School, when she and a female friend decided to attend an interest meeting about high school football from the Western Albemarle High School coaching staff.

After listening to Coach Ed Redmond and his staff talk about the team, Smartt’s friend decided that football wasn’t for her.

Smartt, on the other hand, was hooked.

“The reason I went to the meeting in the first place is still a mystery to me,” Smartt said. “I’ve always loved playing sports and with high school approaching, I just wanted to try something new and different.”

Smartt’s decision was met with some trepidation at first, especially from her parents.

“After the meeting, I remember telling my mom I was going to play football and she didn’t think I was serious at first,” Smartt said. “After realizing I was serious, she still didn’t know how to react. My parents talked it over and after a bit of begging and persuading, they told me I could play, but only as a kicker. Their biggest concern was the physical aspect of the sport.”

Smartt’s commitment to the sport was evident.

She started with preseason conditioning after school a few years ago and continued through the summer and into preseason tryouts. She made the junior varsity squad as a freshman and spent two seasons acclimating herself to the sport.

As the lone female on the team, Smartt admits it was odd at first, but she never really felt out of place with her teammates.

“My first preseason, I had been so nervous that there wasn’t much room for anything else,” Smartt said. “I’m assuming some of my teammates were surprised and shocked when they first saw me, but they’ve always been supportive.”

This fall, she joined the varsity squad and became the first female to play at Western Albemarle during Redmond’s tenure.

“She works hard and strives each and every day to reach her potential,” Redmond said. “Her teammates have received her very well. She is a member of our football program, like everyone else.”

Smartt credits her time on the junior varsity team for preparing her for this season.

“[Those] two years definitely helped me grow stronger physically and mentally,” Smartt said. “All of the running, exercises and weightlifting from JV has helped me to survive conditioning and hot practices. Although there is a considerable difference in the crowds for JV and varsity. JV games helped me practice zoning out screaming crowds.”

Football isn’t the only sport Smartt cares about. She grew up playing soccer, which helped Smartt in her role on the gridiron. In addition, last fall, she made an impact for the Warriors’ girls basketball team.

Western basketball coach Kris Wright recalled a regular season game with Powhatan last fall where Smartt came off the bench to give the Warriors a lift. She posted four steals in that game and was vital in the Warriors’ Jefferson District victory over the Indians.

Wright said her growth in the sport is impressive considering she’s only been playing basketball one season.

“Ellie’s got a lot of toughness and a relentless motor, so it’s not surprising that she can take on a sport like football,” he said. “She’s one of the strongest kids on our team. The effort level that she brings make her valuable to any team, but when you throw in that she’s a great teammate, willing to work and always improving, it’s exactly the type of program you want with your program. We’re excited that she’s with us for basketball and I’m sure her other coaches would say the same.”

Females playing high school football is not a new trend. According to a 2017 report from the National Federation of State High School Federations, participation by girls in 11-player football in the United States has doubled, with more than 2,400 participants in 2016.

In Virginia, a total of 44 females represented their high school programs, according to a participation form submitted to the Virginia High School League last spring from its member schools. Eastside, Hayfield and Oakton high schools each had three females on their rosters in 2018.

Smartt admits that being a girl playing football is not that big of a deal.

“I’ve never felt like I get treated differently by teammates,” Smartt said. “Of course, in certain situations, I get treated different, such as locker rooms and things along that line, but besides that I’ve always felt like they treat me like one of the guys. I have classes with some of them at school, some are in my friends group and still others I talk to or hang out with when I see them In the halls or in the morning. Overall, all of my teammates are easy to talk to and I enjoy having them all as teammates and friends.”

On the field, the junior said the key to success is consistency. Whether it’s timing her steps before each kick, or just the symmetry between long-snapper Joey Burch and holder Carter Shifflett, Smartt is focused on her job.

“Being on varsity and being the starting placekicker on extra points are both amazing opportunities and things I’m very proud of,” Smartt said. “Knowing that the past two years of sweat and hard work had finally paid off are moments that I’ll never forget.”

Still, she realizes the high-stress nature of her position.

“Even today, I still get nervous for every kick,” Smartt said. “But for me, a little nervousness helps me. Once the ball is snapped, I try to begin my steps as soon as possible. I trust that Joey Burch and Carter Shifflett will get the ball on the block. By now, I’ve learned to zone out the crowd and everything else out and focus on the ball. It takes me a few seconds after I kick to remember there’s an actual crowd watching me.”

No where was this more evident than last week’s game against Monticello. Smartt was called on to kick three extra points and she converted all three to send the game to overtime. Her final kick, with less than four minutes to play, hit the top of the scoreboard, which prompted a team celebration.

“One of my favorite memories was this past weekend when she hit the game-tying PAT,” Shifflett said. “It was great to see her come up big in that situation because of how hard she works. There was never a doubt in my mind about that kick. I knew she was going to nail it.”

Smartt agreed that it was a special moment.

“Being able to tie the score and help take the game to overtime was a big moment for me,” she said. “Carter Shifflett and the rest of the team congratulated me as I ran off the field. I was showered with high fives from other players and our coaches. Moments like that remind me of why I love football so much.”

The junior has made all 12 of her extra-point opportunities this season.

“My goal for the season is to be perfect on extra points,” Smartt said.

She makes the most of her opportunities in practice as well. Smartt said that her longest field goals kicking by herself was 45 yards, but admits that she’s most comfortable kicking from 25 yards in.

“I would love to attempt a field goal this season,” Smartt said. “But the coaches have to decide what’s best. I respect the decisions they make.”

The support for Smartt has been overwhelming. Whether it’s from teammates, classmates, coaches, parents or fans, everyone is appreciated.

Even though football is a contact sport, Smartt admits she’s not afraid of injury because of the nature of the position she plays.

“Getting tackled or hurt doesn’t cross my mind too much in a game,” she said. “I trust that all the linemen and blockers will do their job and let anyone through. This mindset has helped me quite a bit because it’s one less thing to be nervous about.”

“The toughest part about playing against guys is that most of them are bigger than me,” Smartt continued. “I know it’s rare for females to be on football teams, but by now, I’m so used to it that I honestly forget it’s different to see a girl kick.”

Back in August, U.S. Women’s National Soccer team captain Carli Lloyd attempted a couple of kicks during a joint training camp practice between the Philadelphia Eagles and Baltimore Ravens prior to an international match the next day. Lloyd kicked a 55-yard field goal during the practice which generated a buzz about the possibility of a woman kicker in the National Football League one day.

Locally, Smartt said she’s had some younger girls approach her to ask about football and express how cool it is to see her play on Friday nights and how much they look up to her.

“I’ve never thought of myself as a trendsetter,” Smartt said. “If there are females out there who want to play, I say, ‘go for it’. Most people are going to be supportive and help you through the process. Everyone who has helped me has only wanted to see me succeed and I’m sure that would be the same for any other female out there.”